Once again the Jesus and Mo author, in a strip called “nest,” manages to convey in four panels a complex behavior: the double standard of coddling the feelings of Muslims when their prophet is insulted, while turning a blind eye to criticisms of other faiths: 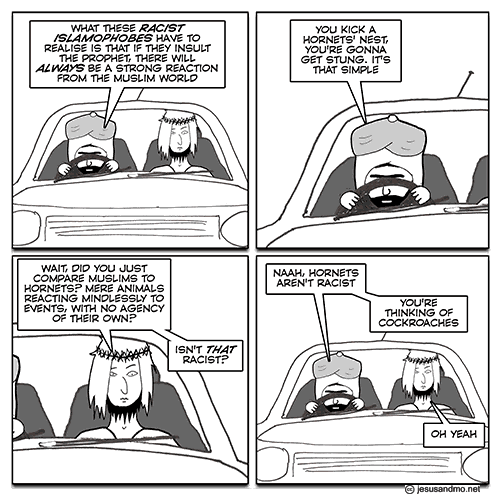 Reader Cindy, by the way, called my attention to a nice article in the Atlantic (by Tanya Basu) on the meaning of “Islamophobia”. The odious Reza Aslan makes an appearance at the end, defending the word as meaning “racism and bigotry against Muslims.” I think the word is confusing, and constantly conflates hatred of Muslims as people with criticism and intense dislike of the tenets of their faith.  “Muslimophobia” would be a better word.