Reader Tony from the UK called my attention to yesterday’s “Start the Week” program on BBC Radio 4, which featured the evolutionary biologist David Sloan Wilson discussing the evolution of human altruism with host Tom Sutcliffe. (Click the screenshot below to go to the page, then press the arrow at lower left on that page. Alternatively, the mp3 is here and the podcast page is here.) Wilson was promoting his new book: Does Altruism Exist?: Culture, Genes, and the Welfare of Others, which came out in January.

If you know Wilson’s work, you’ll also know that he tends to explain nearly everything as a result of group selection: differential reproduction of groups rather than of individuals. And altruism is no exception. As he explains to Sutcliffe: “Groups of altruists do very well compared to groups without altruism.” That’s a pure group-selection explanation. He asserts that the group-selection explanation “is now becoming widely accepted.”

Have a listen (the Wilson segment begins at 1:05 and lasts until about 8:30. The other participants continue to discuss Wilson’s theory (with him chiming in from time to time), but the telling part comprises the first nine minutes. 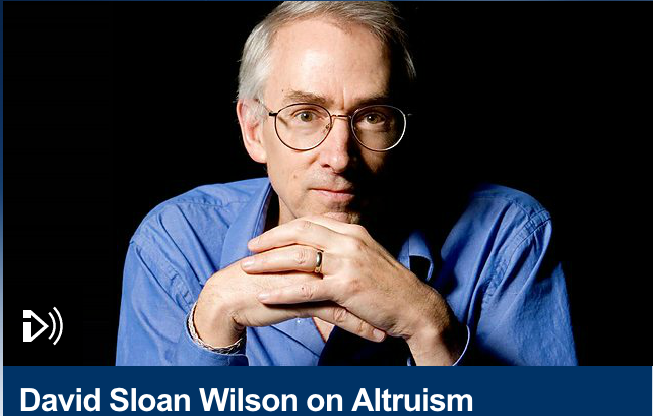 Sutcliffe asks Wilson a good question: how can you be so sure the problem of altruism has really been solved? Wilson simply responds that although there are a few holdouts who remain “unconverted,” like Richard Dawkins,  “it is still the case that this problem has been solved and still appears obvious in retrospect.” As Wilson affirms once again, “We now know it is so.”

That is a totally unwarranted degree of assurance about the issue, and in fact Wilson’s confidence angers me greatly.  The fact is that human “altruism” is a mixture of diverse and complex behaviors, only one of which corresponds to the real evolutionary issue of altruism: reproductive self-sacrifice by people that benefits unrelated people who give nothing back. And we simply haven’t the slightest idea whether that form of altruism evolved, or even if it has a genetic basis: i.e., that we have specific genes promoting such reproductive sacrifice. “True” biological altruism in humans appears rare, and when it does it appears to hijack behaviors that evolved, probably by individual or kin selection, for other reasons. Finally, there are formidable problems with explaining altruism and self-sacrificial cooperation by group selection compared to individual selection (see Pinker reference below)—problems that make the group selection explanation less parsimonious.

Wilson is in fact an enthusiast about group selection, and in the BBC show above his zealotry is deeply misleading.  If you were to ask me whether human altruism evolved by group selection, my answer would be “It’s theoretically possible, but we have no idea whether true biological altruism, if it indeed has a genetic and evolutionary basis, involved group selection. Given the problems with group selection, I think it unlikely.” That is what I see as a scientifically responsible answer. Wilson is scientifically irresponsible in his BBC presentation, leaving the untutored listener with the idea that science has finally answered the burning question of altruism. That’s simply wrong, and Wilson was wrong to leave that impression. It’s a lousy way to teach science to the public.

Here are a few problems with Wilson’s assured explanation. First of all, there is a panoply of behaviors we term “altruistic” that aren’t altruism in the true biological sense: an organism sacrificing all or part of its net reproductive fitness to benefit an organism to which it’s unrelated. Giving to charity or helping an old person cross the street are both considered “altruistic” acts in normal language, but don’t involve sacrificing one’s genetic output to benefit someone else. Rather, they’re nice gestures that involve financial or physical but not reproductive sacrifice. Such behavior doesn’t require a direct evolutionary explanation: that is, we needn’t posit a complex genetic scenario to explain it. There are plenty of alternative scenarios, involving a mixture of individual selection and cultural evolution, for how such behaviors came to be (see Peter Singer’s The Expanding Circle for one explanation).

Simple “helping” behaviors that likely evolved in our ancestors, in which individuals benefit those who aren’t especially closely related, could have evolved by individual selection, via a “tit-for-tat” strategy, also called “I’ll scratch your back; you scratch mine”). In these scenarios, individuals remember and recognize each other so that help given to a group-member will eventually be repaid. In other words, the “sacrifice” is only temporary and illusory since it’s repaid. If altruism like that—which isn’t true altruism in the sense that you don’t lose net reproductive fitness—evolved by individual selection, we’d expect to see it evolve in smallish groups in which individuals remember and recognize each other so that generous acts can be repaid to the right people. These are in fact precisely the conditions under which most of human evolution took place. Those kinds of groups aren’t necessary for altruism to evolve via group selection, which makes the group-selection explanation less necessary—and attractive.

Finally, do humans have genes for true biological altruism, in which we sacrifice our own lives and offspring production for others who are unrelated? Such acts do occur—among, for instance, volunteer firemen and soldiers who save their buddies by throwing themselves on grenades—but they are rare, not common. There is no indication that we have been selected to behave in such ways, and, in fact, most people don’t act like that. Further, even those kinds of behaviors can hijack evolved behaviors in a maladaptive way. There’s a reason why soldiers call each other “brother”; and “grenade-covering” behavior may involve hijacking of kin selection or small-group cooperation that evolved by individual selection in our ancestors. Adoption, which resembles true altruism since you’re rearing genetically unrelated individuals, is most likely a hijacking of parental instincts evolved by kin selection, and usually occurs in adults who can’t produce their own genetically related children. Finally, as Michael Price has pointed out, most altruistic-seeming behaviors really show the earmarks of having evolved for the actor’s benefit. As I say in Faith versus Fact, where I’m addressing Francis Collins’s claim that altruism couldn’t have evolved at all but must have been vouchsafed us by God:

In fact, many aspects of cooperation and altruism are precisely those we’d expect if their rudiments had evolved [by individual selection]. Altruism toward others is reciprocated most often when many people know about it, but often isn’t when you can get away with free riding. Humans have sensitive antennae for detecting violations of reciprocity, they choose to cooperate with more generous individuals, and they cooperate more when it enhances their reputation. These are signs not of a pure, God-given altruism, but of a form of cooperation that would evolve in small bands of human ancestors.

But for the most cogent critique of why human cooperation and altruism are unlikely to have evolved by group selection, see Steve Pinker’s Edge essay, “The false allure of group selection.” I won’t repeat his many arguments, but if you’re interested in the evolution of traits that seem bad for the individual but good for the group, it’s a must-read. One of his most telling arguments is that the traits that lead one group to dominate others are in fact not altruistic: they’re things like coercion, slavery, contempt for weakness, and so on. Groups that we see as really altruistic, like the Amish and San, don’t seem to have done well in inter-group competition.

In the end, Wilson is simply wrong in asserting that the evolutionary problem of altruism has been solved—and here I mean the existence of true biological altruism in humans. We don’t have any idea if such altruism is even based on “altruism” genes. (And if we all have such genes, why do so few of us display true biological altruism?) Wilson distorts the situation when claiming, erroneously, that nearly all evolutionists subscribe to Wilson’s own theory based on group selection. That is scientific self-promotion at its most self-serving.

103 thoughts on “David Sloan Wilson tells the BBC that the evolution of altruism in humans is “solved”: it’s group selection (of course)”