I’ve already outlined my disagreements with cartoonist Garry Trudeau’s unfortunate remarks about Charlie Hebdo when Trudeau received his Polk Journalism Award—the first for a strip cartoonist (see my posts here and here). Trudeau was not only wrong about the meaning of the supposedly anti-Islamic cartoons in the French satirical magazine (they were almost always satirizing the anti-Muslim French right or the perfidies of the religion itself), but was also misguided  in suggesting that it’s fine to “punch up” (satirize the powerful), but that “punching down” (satirizing the oppressed and relatively powerless) constitutes “hate speech.” In fact, I noted that Trudeau’s remarks came close to blaming the cartoonists themselves for inciting protest, and for their own murders. He showed very little sympathy for the French satirists.

As Kenan Malik (a liberal writer who often discusses science) points out at his website in a critique of Trudeau’s remarks (“This is not a post about free speech“), Trudeau’s speech got several facts critically wrong, including the misapprehension that the editor of the newspaper who commissioned the famous Danish anti-Islam cartoons was a woman, and that French law prohibits hate speech only if it incites violence. Both claims are wrong. But neither is as wrong as Trudeau’s misunderstanding of the Charlie Hebdo cartoons. As Malik says:

There is a certainly debate to be had about Charlie Hebdo, and about the character of its cartoons. Part of the problem is that many people fail to understand the context of the cartoons; they ignore the fact, for instance, that many of the cartoons they find offensive are actually parodying the claims of the far right, and instead take them at face value as straightforwardly racist caricatures. Whether they are successful as parodies is a legitimate question. There is, however, a certain irony in so many liberals reading the cartoons so literally.

Malik also takes issue with the idea that attacking Islam is actually “punching down,” pointing out the numerous writers and cartoonists within Muslim societies who have been jailed or killed for making anti-Islamic remarks. Finally, he outlines the very real danger of Western societies repeatedly capitulating—as Trudeau would have us do—to fear of Muslim outrage, leading to self-censorship:

In confusing criticism of Islam with hatred of Muslims, in assuming that those angered by Charlie Hebdoare in some way representative of Muslim communities, in claiming that Charlie Hebdo had ‘incited’ violence, in suggesting that as ‘hate speech’ the cartoons should not have been published, Trudeau is betraying such artists and cartoonists. Again, as I [Malik] wrote in my original Charlie Hebdo article:

“What nurtures the reactionaries, both within Muslim communities and outside it, is the pusillanimity of many so-called liberals, their unwillingness to stand up for basic liberal principles, their readiness to betray the progressives within minority communities. On the one hand, this allows Muslim extremists the room to operate. The more that society gives licence for people to be offended, the more that people will seize the opportunity to feel offended. And the more deadly they will become in expressing their outrage. There will always be extremists who respond as the Charlie Hebdo killers did. The real problem is that their actions are given a spurious moral legitimacy by liberals who proclaim it unacceptable to give offence.

Liberal pusillanimity also helps nurture anti-Muslim sentiment. It feeds the racist idea that all Muslims are reactionary, that Muslims themselves are the problem, that Muslim immigration should be stemmed, and the Muslim communities should be more harshly policed. It creates the room for organizations such as the Front National to spread its poison.”

Finally, Malik ends his piece on a powerful note:

Let me give the last word, or the last thought, to the Lebanese artist Mazen Kerbaj who, in a response to the Charlie Hebdo killings, brilliantly summed up what is at stake: 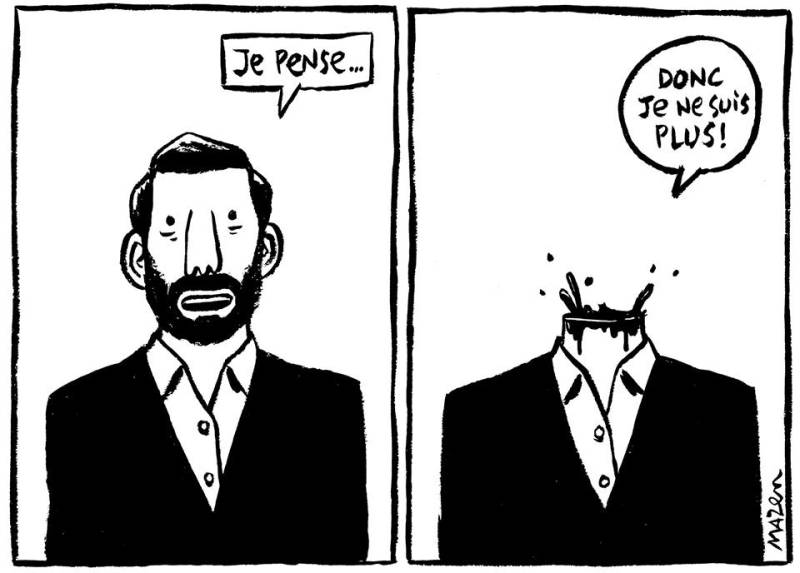 Translation:  “I think, therefore I no longer am.”

At The Atlantic, which is becoming my favorite liberal magazine, writer David Frum also takes Trudeau to task in a piece called “Why Garry Trudeau is wrong about Charlie Hebdo.“ Frum is especially concerned with the “punching down” business:

To fix the blame for the killing on the murdered journalists, rather than the gunmen, Trudeau invoked the underdog status of the latter:

“Traditionally, satire has comforted the afflicted while afflicting the comfortable. Satire punches up, against authority of all kinds, the little guy against the powerful. Great French satirists like Molière and Daumier always punched up, holding up the self-satisfied and hypocritical to ridicule. Ridiculing the non-privileged is almost never funny—it’s just mean.”

Had the gunmen been “privileged,” then presumably the cartoons would have been commendable satire. The cartoonists would then have been martyrs to free speech. But since the gunmen were “non-privileged,” the responsibility for their actions shifts to the people they targeted, robbing them of agency. It’s almost as if he thinks of underdogs as literal dogs. If a dog bites a person who touches its dinner, we don’t blame the dog. The dog can’t help itself. The person should have known better.

On first reading, then, Trudeau is presenting us with a clear and executable moral theory:

1. Identify the bearer of privilege.

. . . But here’s the trouble: There are many dogs in any fight, and the task of identifying which one is the underdog is not so easy.

Frum then gives a historical analysis of how sympathizing with the underdogs can lead one badly astray. I’d add that there are many “oppressed” minorities whose views are regularly satirized, including religious believers like Scientologists and Mormons. Is that “punching down”?  And of course there are the Jews, and if ever there was a historically oppressed minority, it’s that one. Yet, as Frum suggests, this led Trudeau to adopt a double standard:

To support his preferred identification that the most violent are the most oppressed, Trudeau is led to equate the practitioners of the violence with their targets:

“The French tradition of free expression is too full of contradictions to fully embrace. Even Charlie Hebdo once fired a writer for not retracting an anti-Semitic column. Apparently he crossed some red line that was in place for one minority but not another.”

Again, Garry Trudeau is not the first person to insinuate that France and Europe are guilty of over-concern for the sensibilities of Jews at the expense of the sensibilities of Muslims. Glenn Greenwald made the same point on the Intercept, by posting some prize specimens from his collection of anti-Semitic cartoons. The rulers of Iran likewise have organized a festival of Holocaust denial cartoons. (This is actually the second such festival in Iran; a prior festival was staged in 2006.) [JAC: have a look at that second link.]

But Trudeau is the first prominent person identified with the mainstream of American liberalism to advance the point, and that represents a milestone of sorts. But a milestone toward what?

I would hope that some day Trudeau would see how misguided his speech really was. One must be careful to distinguish between mocking ideas and reviling the people who hold them, but Trudeau, who I thought was a savvy guy, apparently can’t (or won’t) make that distinction. He’s almost enlisted in the Social Justice Warrior camp, one of whose tenets is that the oppressed are always right. Well, they’re oppressed, and we should fight against all forms of unjust oppression. But that doesn’t mean that the ideas of those groups are always commendable or at least should be immune to satire.