Reader Lou Jost told me that a very rare hummingbird, the Blue-Bearded Helmetcrest (Oxypogon cyanolaemus), thought to be extinct since 1946, has just been rediscovered in its very restricted habitat—the páramo in the Santa Marta Mountains of Colombia. It’s a beautiful creature, and the authors who discovered and described the finding (reference below, no link), took the first ever picture of this bird alive (all other photos are apparently of dead specimens).

According to Wikipedia, the bird is known from only 62 museum specimens and was last seen alive 69 years ago; but I noted that the entry has been quickly updated to reflect the rediscovery (despite Greg’s beefing, Wikipedia is good for some things!):

Surveys during 1999-2003 failed to detect the species. A brief survey in February 2007 and December 2011 failed to detect the species but survey efforts have not yet been sufficient to list this species as Critically Endangered (Possibly Extinct). In March 2015, the blue-bearded helmetcrest was rediscovered by researchers from the foundation ProAves while documenting fires set by local farmers that now threaten the species.

This February, Carlos Julio Rojas and Christian Vasquez were inspecting the Parque Nacional Natural Sierra Nevade de Santa Marta, concerned about fires that the locals had set to create pasture as well as about pigs that had been allowed to roam free in the fragile habitat. On their trip, they saw the bird. From the paper:

At 11:00 AM on 4 March 2015, during surveys of fires in high elevations (3,930 m elevation) of the Sierra Nevada de Santa Marta some 14 hours by foot above ProAves’ reserve, CJS saw a small bird move quickly past him and perch on a bush nearby. He took a quick photograph of it before it flew off. The photograph on the camera screen revealed the striking plumage of the long-lost Blue-bearded Helmetcrest.

That picture is below, along with the proud caption, “First ever photographs in life of the spectacular Blue-bearded Helmetcrest (Oxypogon cyanolaemus).” Look at that crest and blue beard—what a beaut! 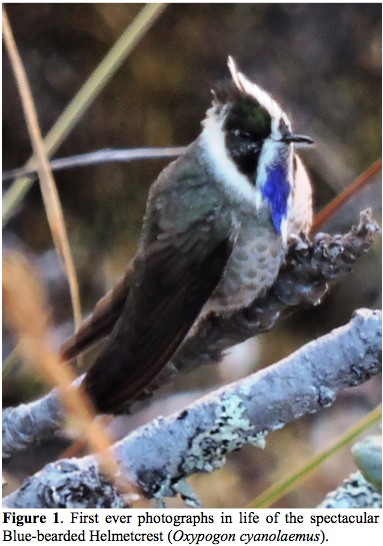 I can’t find any other photographs (or even drawings) of the species on the Internet.

Here’s a bit of description from the paper, in which you can sense the discoverers’ excitement (my emphasis):

Collar & Salaman (2013) illustrated specimens of all species in the genus and analysed plumage differences. They considered O. cyanolaemus uniquely to possess a (narrowly white-bordered) glittering purplish-blue beard, dull greenish sheen on the crown-sides, brown-and-whitish mottled underparts, a white undertail except for dark distal edges and central rectrices and a relatively short crest. All these features are clearly visible from the photographs presented here. The photographs presented here clearly match those of O. cyanolaemus specimens in Collar & Salaman (2013). Blue-bearded Helmetcrest is a highly distinctive species in its plumage and no other species in this genus is expected at the observation locality high in the Santa Marta mountains. There can be no doubt as to the identification based on the photographs presented, and that this long-lost species has finally been found.

Here’s the same individual in another place. They saw a total of three birds. 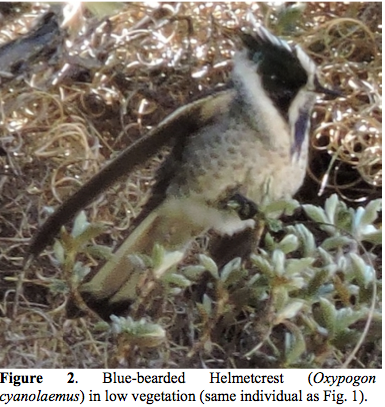 This species is a long way from safety. It’s endemic to a small patch of habitat that is under siege from the locals, who set fires to provide pasture for their livestock. Although the park is given the highest level of protection possible in Colombia, that protection also allows “indigenous peoples to carry on their livelihoods.” All the researchers can suggest is to educate the locals and restore the páramo where the bird lives if those locals agree to stop grazing. But really, how easy can it be to tell people to stop raising their animals so that a rare hummingbird could survive?

48 thoughts on “A beautiful hummingbird, thought extinct, is found alive”