I’ve never heard of woomeisters or denialists who solicit “scientific” challenges to their woo—and this happens occasionally when a creationist offers big bucks to anyone who can “prove” evolution—ever paying off. But this time it happened—after the courts intervened.

According to the BBC News, the Guardian, and the English language The Local.de, which provides news about Germany, Stefan Lanka, a German biologist who believes that measles is a psychosomatic disease caused by “traumatic separations”, offered €100,000 to anyone who could prove that the disease was caused by a virus.  This offer was made five years ago in an online advertisement. The original ad said this:

Big mistake, for Lanka was going up against established science.

So Dr. David Bardens, also German, took up the offer, sending to Lanka six scientific papers establishing that measles was in fact caused by a virus. You know what happened next. Lanka refused to pay up, which is what always happens. But this time the persistent Dr. Bardens took Lanka to court. And the court, in Ravensburg, Germany, ruled in Barden’s favor. After hearing several hours of testimony by expert witnesses and arguments by both sides, they issued a statement that “The court had no doubt about the existence of the measles virus.”

Lanka, of course, will appeal. And he’ll lose, and he’ll be humiliated.

After this, I’m tempted to submit Why Evolution is True to those creationists offering big money to anyone “proving” evolution.  If I lose, I could then go to court as well, though I’d be a bit worried about American judges deciding whether evolution was a well-established scientific fact!  But at least the public is more “enlightened” about measles, though the enlightenment isn’t of the sort that Lanka wanted.

Here are the principals. First, the elated Dr. Bardens, post-verdict (from The Local, photo by DPA): 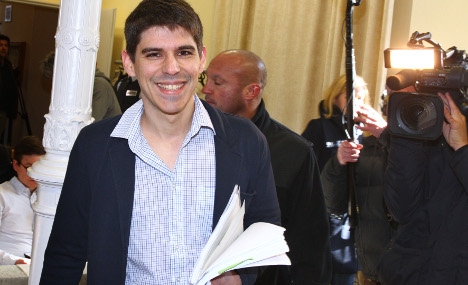