Haaretz is the New York Times of Israel, a paper aimed at the intellectual elite on the left. Yesterday it reported the results of a questionnaire sent to all the heads of political parties that are likely to enter the Knesset (the Israeli legislature). There were four questions:

1. What is your position on teaching evolution in Israeli schools?

2. What is your position on the state’s biometric database? [A five-year old law, which I object to, requiring Israeli citizens to furnish fingerprints and facial contours for identity cards.]

3. What is your position on Israel’s contribution to global warming?

4. Do you personally believe in God?

The paper was most interested in the last question about God (of the 7 answering politicos, one said she was an atheist, and another waffled, while the rest were believers), but I was interested in #1, the question about evolution. Let’s look at what the politicians said. Their parties are given first, then their names: 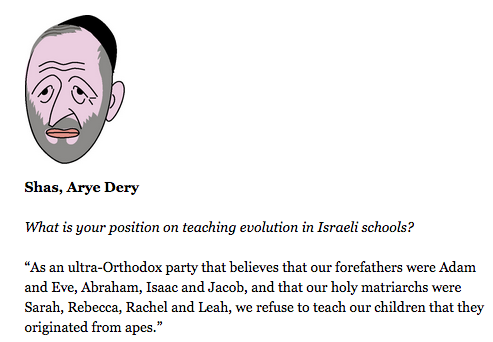 An ignorant fool, blinded by his faith (note that Shas is an Orthodox party). The Gopnik Test brands him unworthy. 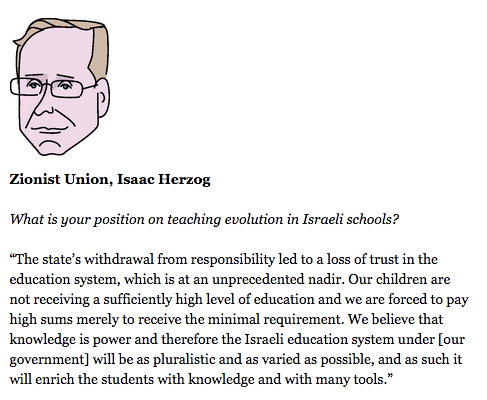 This is a waffle if there ever was one. What does he mean by “pluralistic”? That all theories, including creationism and intelligent-design creationism, should be taught? His recommendation is not only disingenuous, but would do nothing to raise the state education from its “nadir.” He also fails the Gopnik Test. 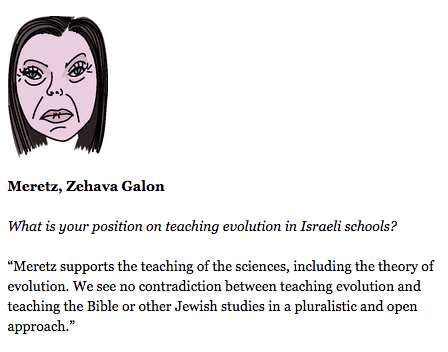 Zehava Galon was the only atheist, and also is pro-evolution. Israelis: vote for her! I’m not keen on the accommodationism, though, 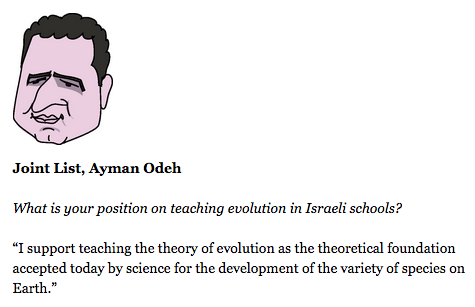 Another right thinker, one who doesn’t mince words. Note that he is an Israeli Arab, and head of a party. You wouldn’t see an Israeli heading a political party in Palestine! Kudos to Ayman for his forthright views. 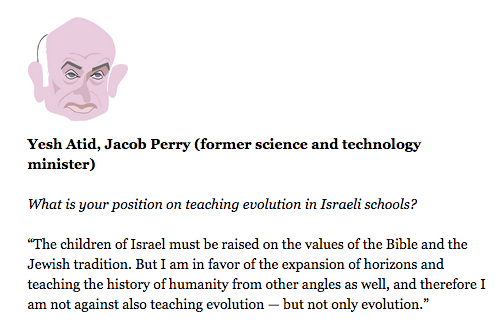 Another waffler who apparently wants creationism taught along with evolution. And note that he’s the former science and technology minister! 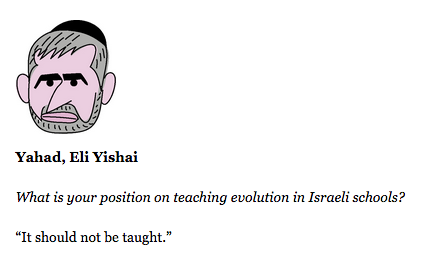 Another blinkered ignoramus. Note above that Yahad is an orthodox party, so this is no surprise. Remember that, contrary to what many people think, a lot of Orthodox Jews—but not all of them—oppose evolution. 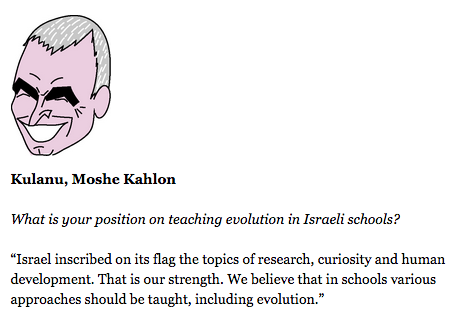 Yet another waffler! The “various approaches” seems to be a code word for “other views,” i.e., creationism.

So what we have here are only two of the seven politicians passing The Gopnik Test, two failing it outright, and three wafflers. That’s a sad situation. Reader Golan, who sent me the link, made these comments after reading the results (I believe he/she is an Israeli):

This was a non-issue in Israel until recent years, and nobody in the main non-orthodox parties would seriously question the need to teach evolution. I see this as a very disturbing import from the U.S.

Keep in mind that Shas and Yahad are ultra-orthodox Sepharadic parties, so their answers are at least unsurprising.

But that’s not all the data. Haaretz noted that four party heads did not response. Have a look:

It cannot have escaped your attention that our questionnaire is only partial. Of the heads of the 11 parties to which we sent the questions, only seven chose to respond. You don’t need to be a brilliant analyst to recognize which side of the political map the nonresponders are on.

“MK Litzman declines to respond in this instance,” wrote Yaakov Izak, the spokesman for Yaakov Litzman. It’s understandable: United Torah Judaism is the Ashkenazi Haredi party that is responsible for its interpretation of the Torah, not for the State of Israel. Its members will not be cabinet ministers in the next government, and its voters will not come from the readership of Haaretz.

The heads of the right-wing parties had a full month to respond with a sentence or two, in their own language, and they were dumbstruck.

Avigdor Lieberman’s spokesman, Tal Nahum, said, “We do not cooperate with Haaretz.” That is not true, of course — Yisrael Beiteinu cooperates when it’s convenient for the party.

And if you think that Israeli newspapers toe the government’s line, here’s how Netanyahu’s office responded and how Haaretz reported that response:

The campaign headquarters of Prime Minister Benjamin Netanyahu surpassed itself, when media adviser Ofer Golan opined that the questionnaire was “cheeky.”

I can’t recall being called that since high school — the same high school where I learned about the creation of the world instead of the evolution of species, like 95.5 percent of Israeli schoolchildren.

In fact, the response from Netanyahu headquarters should not have surprised anyone. After all, it’s the same Netanyahu who refuses to meet his challengers in a televised debate, the same Likud that has not offered prospective voters a party platform.

In the end, only two out of the 11 politicians polled said that they unequivocally favor the teaching of truth over fiction, with four refusing to answer. Now those refusals could be based on the other three questions, and probably are, but this is a sad indictment of the state of Israeli politics. When the former minister of science and technology waffles about evolution, you know that the Knesset, insofar as science is concerned, is mirroring the U.S. Congress—especially the Republicans.

Now I don’t know much about these parties, and perhaps Israeli readers can fill us in below. But even if these politicians are pandering to the electorate and not giving their real views, it’s still dishonest.