The January 27th issue of New Scientist contains an interview with Ed Wilson that has a few interesting tidbits. The tile, “E. O. Wilson: Religous faith is dragging us down,” makes you think it’s going to be about the problems of faith, but it’s mostly about the loss of biodiversity and about his new book, The Meaning of Human Existence (I haven’t read it and probably won’t). Here’s a few bits of the Q&A, kindly sent by reader Steve, who cut and pasted the interview into an email for me. (I can’t get the latest issue of the journal, even electronically, from my library, so the link above just gives you a paragraph.)

First, I hadn’t realized that this new book was part 2 of a trilogy:

So will you examine humanity’s future next?I’m writing a trilogy. The first was The Social Conquest of Earth, which dealt with where we come from.The Meaning of Human Existence deals with what we are. And the final part, The End of the Anthropocene, will look at where we are going.

The major theme of that upcoming book will be that we are destroying Earth in a way that people haven’t appreciated enough, and that we are eroding away the biosphere through species extinction, like the death of a thousand cuts. I want to examine the new ideology of the anthropocene – namely those who believe that the fight for biodiversity is pretty much lost and we should just go on humanising Earth until it is peopled from pole to pole; a planet by, of and for humanity. It sounds good, but it’s suicidal.

I read the first book and panned it in the Times Literary Supplement; it just wasn’t very good, even though it disses religion. One of the main problems was that it promoted (in the absence of any evidence) group selection as the major cause of nearly every human trait affecting human and ant social behavior. Perhaps the new book is better, but I wish Wilson would get off his group-selection hobbyhorse and maybe curb the philosophizing.  His call to retain biodiversity and stop destroying the planet is of course worthwhile, but do we need him to tell us what we are, given that his attempt to tell us where we came from was so flawed?

Wilson continues his critique of religion, which I think is great since he’s so widely admired. People have to sit up a bit when such a famous (and affable) scientist says stuff like this:

Is atheism the answer?In fact, I’m not an atheist – I’m a scientist. Atheism is the belief that there is no god, and you declare there is no god: “Come, my fellow atheists, let us march together and conquer those idiots who think there is a god – all these other tribes. We’re going to prevail.”

I would even say I’m agnostic because I’m a scientist. Being an agnostic means saying, dogmatically, that we will never be able to know, so give it up. The important thing is that it appears that humans, as a species, share a religious impulse. You can call it theological, you can call it spiritual, but humans everywhere have a strong tendency to wonder about whether they’re being looked over by a god or not. Practically every person ponders whether they’re going to have another life. These are the things that unite humanity.

If humans have a built-in spiritual yearning, can we do anything about it?This transcendent searching has been hijacked by the tribal religions. So I would say that for the sake of human progress, the best thing we could possibly do would be to diminish, to the point of eliminating, religious faiths. But certainly not eliminating the natural yearnings of our species or the asking of these great questions.

As you might have guessed, I’m not 100% on board with his answer to the first question. Yes, I think that acting like a scientist means that one can never say for certain that there is no God. There’s always the possibility that some evidence will come along that will convince us that some kind of supernatural being exists. (Let’s not have any arguments here about aliens and the Matrix tricking us, okay?) But it’s misleading to say that “I’m an agnostic about God because we can never know for sure.” When I hear that, which is fairly often, my response is always the same. I ask the person, “Are you also an agnostic about fairies and the existence of the Loch Ness Monster?” No, nobody is an agnostic about fairies and Nessie. Why? Because while, like God, they are a theoretical possibility (as is everything), there is ample evidence to support the contention that “No, for all practical purposes they don’t exist.” You would bet your house that fairies don’t exist, and that’s what we mean by “confidence.” The same goes for God.

The problem with this construal of “agnostic” is that it makes people think that “Well, Wilson thinks there’s a 50/50 chance that God may exist.” And I think people who say they’re agnostics want people to think that, because it’s not popular to assert that God almost certainly doesn’t exist. (That, after all, was the bus slogan that everyone hated.)

As for the second question, Wilson gives a better answer.

Finally, here’s some biology emanating from a very good question:

From all these big questions to the smallest creatures… I cannot interview the world’s best known ant expert without asking: do you have a favourite?I do. It’s an ant called Thaumatomyrmex. In all my travels, I’ve only seen three. They’re very rare. It has teeth on jaws that look like a pitchfork. The teeth are extremely long, and when it closes the jaws, they overlap. In at least one species, the teeth actually meet behind the head. So what does this monster eat? What does it use those teeth for? I just had to know, so I sent an appeal out to younger experts in the field, particularly in South America, where these ants are found.

Eventually they discovered the answer: it feeds on polyxenid millipedes. These millipedes have soft bodies, but they’re bristling all over like a porcupine. So the ant drives a spike right through the bristles and nails it. And what we hadn’t noticed is that the ant also has thick little brushes [on some of its limbs], and members of the colony use these to scrub the bristles off – like cleaning a chicken – before dividing it up. That’s my favourite.

Here’s a picture of that Thaumatomyrmex taken by Alex Wild: 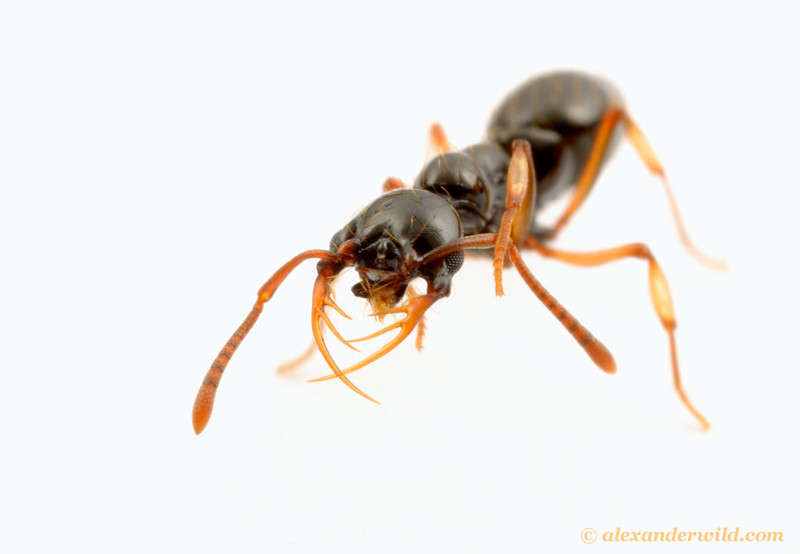 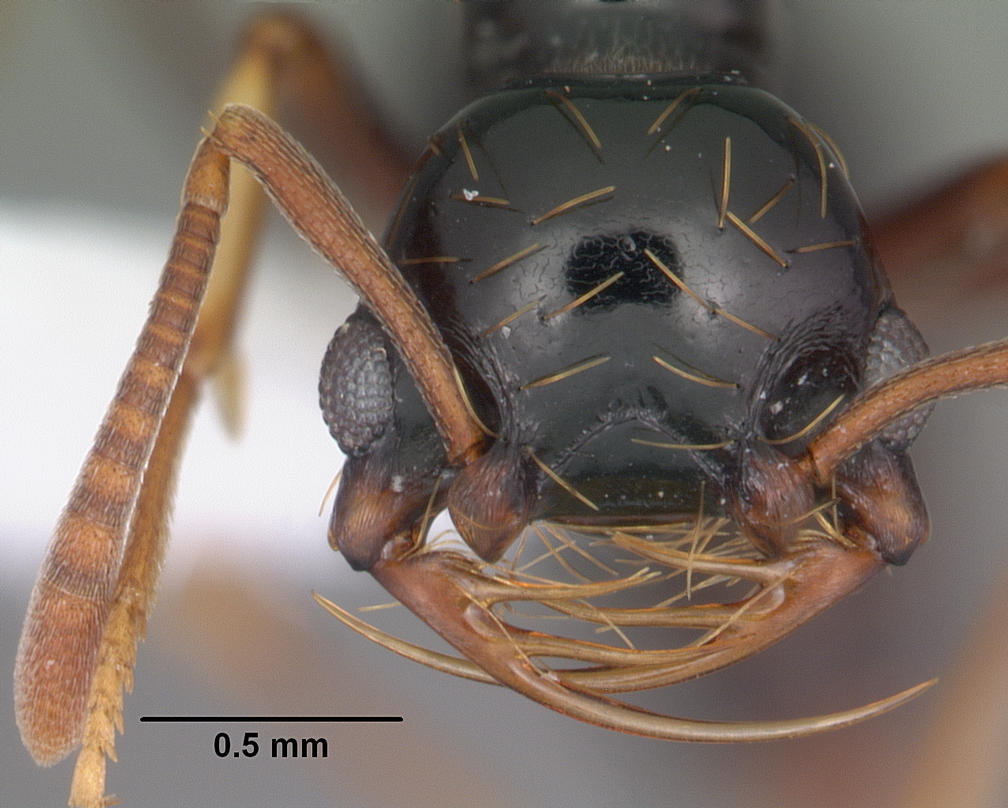 A polyxenid millipede (from Nature Closeups), showing why the ants need that pitchfork and spine-scraping legs: 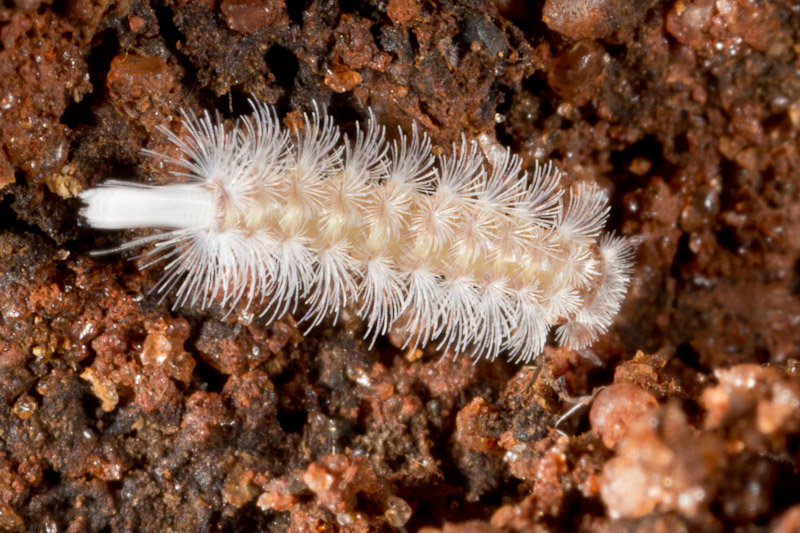 An explanation of the behavior from Macromite’s Blog:

Neotropical ants of the genus Thaumatomyrmex (they feign death when disturbed) hunt the polyxenids abundant in leaf litter (Brandão et al. 1991). A polyxenid is seized by the ant’s antennae, snapped by the wicked-looking mandibles, and then stung and carried back to the nest. In the nest the paralyzed polyxenid is turned belly up and stripped of its setae using the fore tarsi which have “small but stout setae” (perhaps too stout to be engaged by the grappling hooks) and the mandibles. This can take 20 minutes, interrupted by bouts of grooming, so it seems the polyxenid setae may still be fighting back. Brandão et al. thought the setae must have a noxious chemical – this being the normal millipede defence – but Eisner & Deyrup have shown that the morphology of the setae themselves can be fatal and no chemical defence need be invoked. The hunter then eats most of the polyxenid and feeds the remains to a larva.

And a diagram of the behavior showing, respectively, discovery, stinging, cleaning, and nomming (from AntyScience): 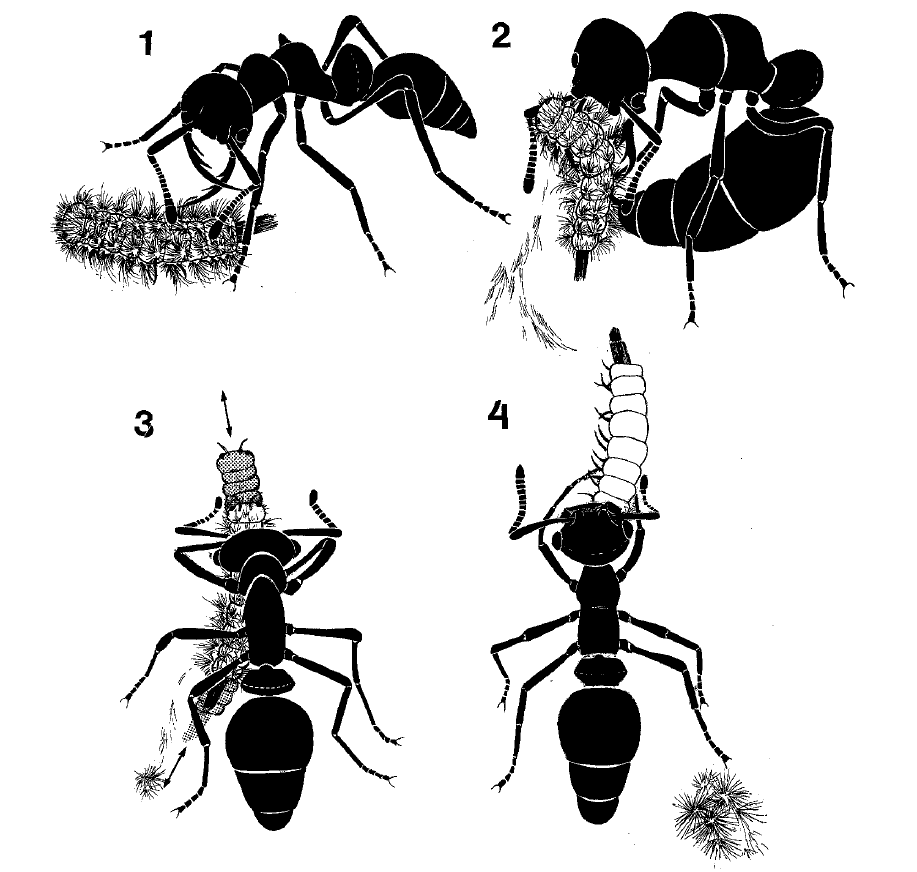