Here’s a selection of the nasty, humorous, and misguided comments that some readers tried to post over the last few weeks. All of the misspellings and other errors appeared in the original (attempted) comments.

Reader “NEIL C. REINHARDT” (yes, in caps, like the rest of his email), had a few words to say about cats in a comment on my post “Spot the Jack Russell terrier“:

WHILE I AM FEEDING THREE CATS OHTHRS WERE NOT AND WHILE THEY HAVE PUT ME ON THEIR “STAFF”, I HAVE SOME QUESTIONS FOR YOU.

HOW MANY “WAR CATS” ARE THERE? “DRUG CATS”? “SEARCH AND RESCUE” CATS? “LIFEGUARD” CATS?
“BOMB” CATS?

HOW MANY CATS WILL RUN OUT TTO A MAIN ROAD TO GET FIRE AND RESCUE PERSONNEL AND LEAD THEM BACK TO WHERE THEY ARE NEEDED?

AND HOW MANY CATS PULL SLEDS?

SO GET THE HELL OFF OF THIS BS AOBUT CATS BEING BETTER THAN DOGS ARE!

This was actually similar to an argument made by Malcolm Gladwell in the New Yorker‘s “Cats vs. Dogs” debate that we had last October. Gladwell’s thesis, which he deliverered in a hilarious 8 minute-talk, was that the superiority of dogs was demonstrated by their participation in the War on Terrorism (bomb sniffing, finding victims, etc.), while cats didn’t give a rat’s ass about terrorism. Ergo, he argued, dogs were superior. Here Mr. CAPSLOCK argues that cats are inferior because they don’t do the bidding of humans. I guess, then, he’d argue that slaves are better than free people! Seriously, though, one of the appeals of cats is that they don’t do what you want; they are independent, semi-wild, and an animal closer to being wild than is a dog. And you have to earn their love, which is what you do with humans, who do not (as do dogs) love you unconditionally. But I’ve said all this before. My real reply to NEIL C. REINHARDT would be this: “Back away from the caffeine. Slowly. . . ”

Reader Mark sent me this cartoon as an answer: 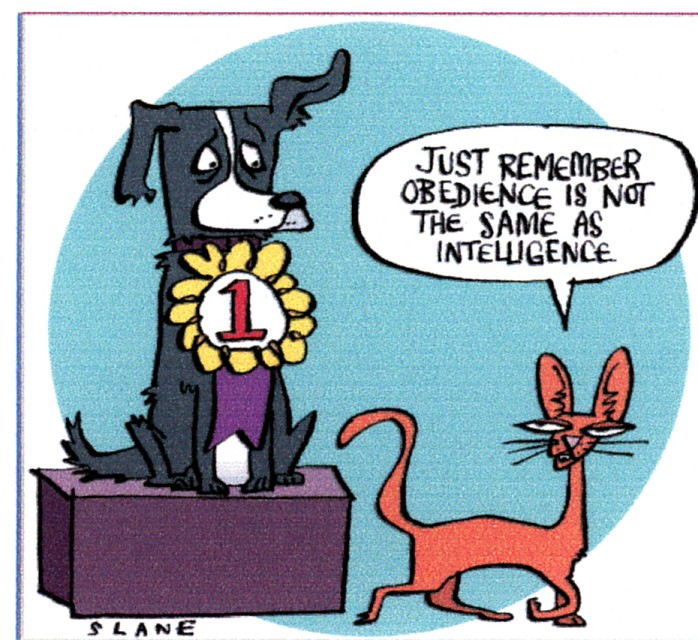 Reader “Katia” defended the Pope against my criticisms in the post “Pope Francis says it’s not kosher to make fun of faith“:

Frankly I agree with Pope Francis 100%.
To question this and continue the path of blaming and criticizing more progaganda.

What I said about Pope Francis was the harmful nature of his claim that nobody should criticize religion (of course he meant Catholicism). I’m not sure what Katia is trying to say here, or what common sense is, but if nobody “blamed” the Church, its reprehensible policy of covering up child rape would have never been uncovered, and might well have continued.

Reader “John Balmer” criticized evolution in an attempted comment on my post, “Scotland refuses to ban teaching of creationism“:

If Evolution is such a solid fool proof and unshakable scientific fact ….then why are evolutionists so scared if it being challenged by an alternative view of Origins and by having it put under scrutiny….the truth is the evolution Theory is full of holes and has become nothing more to the ruling establishment than a Sacred Cow not to be touched or challenged……now that is Indoctrination !!!

I’m not scared at all of creationists, who tend to be a foolish lot, nor am I afraid to put the theory of evolution under scrutiny. After all, that’s what I did in my last book, comparing its ability to explain the data with the ability of creationism. Evolution won hands down. (Did you read that book, by the way?) And what are the “holes” you’re talking about? Our unsolved questions, like the origin of life? Well, we’re working on them, and, unlike you, at least we have a way to know whether our answers are wrong. Finally, you do realize, don’t you, that any scientist who could disprove the existence of evolution and natural selection would become instantly famous? Scientists don’t get famous by buttressing an established paradigm, but by overturning it.  But you appear to be blinded by faith, and so you may not understand what I’m trying to say.

Reader “Raynor” had something to say about Alex Malarkey, the Christian boy who retracted his assertion that he visited Heaven after an accident, as detailed in my post, “Boy who wrote bestseller on visiting heaven retracts his claims”:

Alex, et. al are possesed and the book is true. All who claim otherwise are going to hell.

Now this may be a “Poe,” but I’ll assume that Raynor is serious. And if Alex is possessed (presumably by Satan), why would Satan, speaking through the boy, produce an account of heaven that is true?

Reader “Zenta” made this comment on “The Paris murders: Catholic League’s Bill Donoghue gets it wrong; New Yorker’s George Packer gets it right“:

Social life, politics and Power are more complicatde than Biology. It is funny to see trying to explain everything based on wrong analogy, irrelevant biology or psychology.

(I’ll assume this is a female, but it doesn’t matter.) It appears she’s trying to say something, but can’t quite figure out what. And its relevance to the post on the Charlie Hebdo murders, in which I didn’t even mention biology, is nebulous.

Finally, reader “Grow up”  objected to my post “Yiddish girl” corrects Ami magazine about geocentrism“, in which a girl wrote to the Jewish teen magazine AMY (an offshoot of the Jewish magazine “Aim”), saying that “Jews believe” that the Sun goes around the Earth instead of vice versa. I, of course, said that was bogus and that the girl’s views were corrupted by faith.  “Grow up,” almost certainly an adult, argues that, in fact, you can conceive—both religiously and scientifically—of a geocentric solar system:

To start with, I know the editor of the Aim personally. She told me that she barely thought about the answer when responding. She would not insult a young girl writing in so just chose to be polite. She does not in anyway believe in Geocentrism, nor to any very Orthodox Jews she or I know of. It takes great immaturity, obsessiveness and secular fundamentalism to attack a letter written by a little girl in a kids magazine! This is a magazine that regularly has features for kids on accepted science and never has in any way promoted geocentrism.

Still, the editor was right about differing opinions. The opinions she refers to are not scientist but Rabbinic scholars. This girl was arguing that “we Jews” by which she can only mean Orthodox rabbinic consensus, was geocentric. The editor replied specifically to her assertion that it was a fundamental belief of Orthodoxy. It would be a lie to say that not Rabbinic scholars since Galileo have ever been geocentrists because many were. Today however few Rabbis ever thought geocentrism in any way a religious belief and feel free to accept scientific views. Any person seeking to prove what Orthodox Rabbis historical believed can bring proofs either way. Some Rabbis vehemently rejected heliocentrism while there was even one Rabbi who was even a student of Galileo and an ardent heoiocentrist. Thus her answer of differing (rabbinic) opinions was correct and the best answer to give when arguing on theological issues. Regardless, geocentrism today is no longer as “wrong” as it used to be. The Lubavitcher Rebbe pointed out that the theory of Relativity makes the question of what moves around what moot. I am no student of physics but even I understand that relativity does make defining what moves around what much more flexible. If one really feels the need to theologically believe in geocentrism they can do so due to the the theory of relativity.

Leaving aside religion, let’s tackle the scientific claim based on relativity. Now I’m not going to give the answer here, as I’ll leave it to readers. But let me just pose this Gedankenexperiment. Model the Earth going around the sun by making two fists and having one of them revolve around the other.  If you could see your fists from afar, floating in space, you wouldn’t know which object was going around the other. From the Earth’s reference frame, it would look like the Sun was going around the Earth, and vice versa from the Sun’s reference frame. So why isn’t “Grow up” right on scientific grounds?

I’ll put up the answer later, just so readers can think about the evidence for a heliocentric solar system. But do put your own answers below in the comments.