Reader pyers from the UK sent a photo of a bird at his feeder that brings up a cool evolutionary story. Birders and biologists have known for more than 40 years that this species, the Eurasian blackcap, may be splitting into two species before our eyes, as birds going to their original overwintering ground have now split into two different groups overwintering in different places.

But I’m getting ahead of myself. First I’ll show the photo and then let pyers tell a lot of the story, supplementing his comments with what I know about this case. It may involve a form of evolution that creationists say simply doesn’t happen: new species forming before our eyes—in real time!

Pyers’s comments are indented, mine are flush left.

This not brilliant photo  (it is dark and gloomy outside today); it’s of a Eurasian Blackcap (Sylvia atricapilla)  having a nom at my bird feeder. 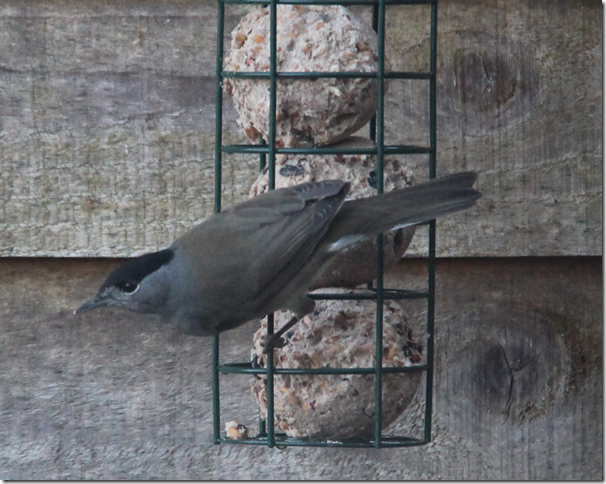 Here’s a bit of evolution in action, which I hope will interest you.

Now normally this wouldn’t be considered for any of your wildlife photos – except for one thing: it shouldn’t be here [in the UK] – at least not in winter!
Blackcaps are normally summer visitors to the UK but is a new(ish) change to their behaviour.The normal migratory route for these birds is to Spain & tropical Africa, but over the last 50 odd years (say from the 1960’s) a small population from Germany, where they breed,  has come to overwinter in the UK because of human-provided food (like my feeder) . What is fascinating is that the change in their behaviour is genetic and has evolved over a very few generations. My only slight complaint is that they are rather thuggish birds, even if they have a beautiful song, and are perfectly capable of bullying a robin (which are normally the birds which deserve an ASBO).

What pyers doesn’t add is that the birds from Spain and Africa both return to the summer breeding grounds a bit later than the birds from the UK, because the latter have less distance to cover on the return.  Since birds form mating pairs soon after they get to the breeding grounds, the change in migration, perhaps based originally on small genetic differences, has led to two subpopulations that mate largely among themselves, so that gene flow is reduced between the two groups. Early-arriving birds mate with other early-arriving birds, and the same assortative mating goes for the late arrivals. That means that the interbreeding that normally prevents genetic differentiation is minimized, and the two differentially-migrating populations can diverge from each other by either natural selection or random genetic drift.

One might indeed suspect that, subject to different selection pressures—including adaptation to very different food and temperatures—the two groups of birds might indeed diverge by selection. And that seems to be what’s happening. There are already genetic differences in body form. The south-migrating birds have pointer wings (favoring flight for long distances) as oppose to the rounder wings of the UK-migrating birds. And the southern migrators also have shorter and stouter beaks, which may reflect a difference in diet (fruit, insects, and pollen for the southerners, suet, seeds, and other human-provided foods for the UK migrators).

These body-form differences are supplemented by other genetic differences that have accumulated: DNA analysis of birds on the breeding grounds can tell where they have overwintered with about 85% accuracy.

Over time (and this has happened in only a few decades), the blackcap species may eventually fragment into two groups that, while breeding in the same location, mate only with members of their own group and not with those from the other. Since this would have a genetic basis (the genetic propensity to migrate one way versus the other is probably increasing over time, since stragglers wouldn’t find good overwintering grounds), what we would have is speciation: the formation of two reproductively-isolated groups descended from an original common ancestor. Certainly what we see now is what evolutionists call speciation in statu nascendi—speciation in the “nascent state”.

Creationists say that we have no cases of this, but, as I show in WEIT, we surely do, especially in certain plants—something that Greg will write about shortly.  And we have lots of cases of species that are likely in the process of forming, as in the blackcaps.  But pyers has more to say:

I have 2 issues. Firstly: as I  said, they are thuggish birds so what effect will they have on the native birds?, and, secondly, this is a human driven change (not deliberate, I know) so what are the long-term chances for the bird? (I am not suggesting that we in the UK stop putting feeders out—we DO love our garden birds—but over thousands of years).

You can find more here on the change to the Blackcap.

And there are papers here (the first one is good)

Also check out the link from Understanding Evolution given above.

We don’t often get readers’ photos that tell stories like this, so h/t to pyers and thanks for the references.

47 thoughts on “Readers’ wildlife photo, and an evolutionary lesson: speciation in action!”