Today’s Jesus and Mo strip, called “nous“, clearly expresses the author’s solidarity with other cartoonists (and people) appalled at the terrorist murders in Paris. (Yes, the killers have now been identified as Muslim extremists.) In his/her email to subscribers, the artist says this:

After yesterday’s horror, the latest strip seemed so trivial and inadequate. So here is a placeholder until next time.

What is incongruent about this is that given the history of the character Mo, I doubt that he’d ever have expressed the sentiments below. Clearly, in this case emotion effaced the plot line. 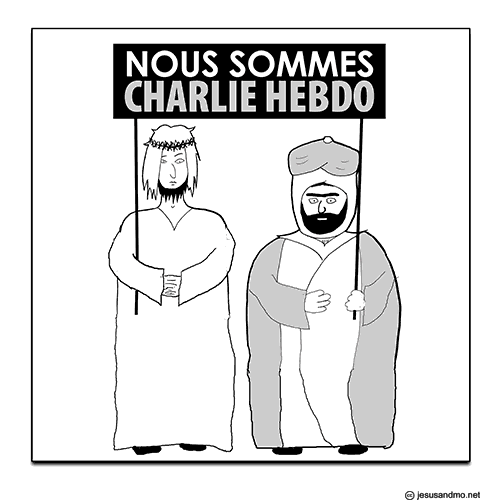 I have a feeling—and I may be wrong—that this time the extremists crossed a line, one that will mark a turning point in how liberals regard terrorism. I suspect that it will be increasingly hard for those liberals and for Islamophiles to justify such acts as the result of colonialism, the disaffection of the disempowered, or as anything other than the expression of pure, misguided religiosity. But, as we’ll see later today, the Catholic League’s Bill Donohue still pins blame on those religion-hating French cartoonists themselves.

The latest update from the New York Times includes this:

The two chief suspects in the attack on Wednesday, Said and Chérif Kouachi, 34 and 32, who are brothers, remained at large as a manhunt continued over a wide area of northern France. A third suspect, Hamyd Mourad, 18, turned himself in at a police station in Charleville-Mézières, about 145 miles northeast of Paris.

This verifies what was suggested by not only the act itself, but the shouts of “Allahu Akbar” from the murderers.

And my CNN email news bulletin adds this:

There have been “several detentions” during the night in connection with the Charlie Hebdo shootings, French Prime Minister Manuel Valls said Thursday, not specifying how many.