According to many papers, including the New York Times,  masked gunmen have attacked the offices of “Charlie Hebdo,” a French satirical newspaper, killing 12 and wounding five more. The paper had been previously attacked for publishing cartoons (as did a Danish paper) mocking Muhammad.  It doesn’t take much to inspire murder among Muslim thug terrorists: look what the paper was firebombed for three years ago:

The newspaper, Charlie Hebdo, has been attacked in the past for satirizing Islam and the Prophet Muhammad. Its offices were firebombed in 2011 after publishing a cartoon of the prophet on its cover promising “100 lashes if you don’t die laughing!”

The latest attack is likely the work of Muslim terrorists as well: the Torygraph gives a video of the attack and reports

“In the footage filmed by a man taking refuge on a nearby rooftop, the men can be heard shouting ‘Allahu Akbar” (God is great) between rounds of heavy arms fire. . .”

All the killers escaped and none have yet been identified. The Telegraph gives a useful live-updated timeline of the attacks and their aftermath, with many photos and live video.

What is bizarre and cowardly about the journalists reporting this horrible episode is that, in its original report, the Telegraph apparently pixillated the cartoon of Muhammad that may have brought on these murders.  Or so says a tw**t from James Bloodworth, which shows a photo that now seems to have been removed form the Telegraph site). (Note below that the BBC has also censored the “offending” issue.) Here’s the Telegraph’s earlier pixillation: 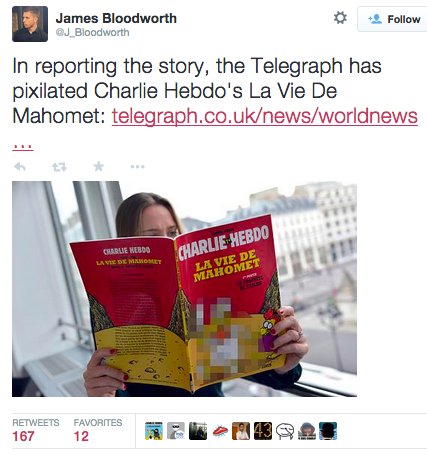 This is a cowardly capitulation to the murderers. Now is not the time to fulminate about the timorousness of the press or the successes of extreme Islamists in suppressing sarcasm and criticism, but pixillating that image is reprehensible. Yes, publishing such things may inspire terrorism, but we cannot be cowed by thugs from expressing our distaste for and criticism of the dictates of religion.

UPDATES: Reader Alberto wrote a criticism of Muslim-cartoon censorship, “We are many but they are legion” on his website The Functional Art and reproduces some of their anti-religious cartoons, though not the one at issue (the paper doesn’t discriminate against religions): 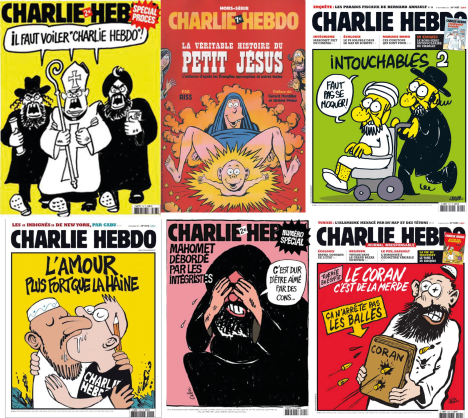 Alberto also notes that the BBC News, to its shame, has also censored the cover at issue. Here’s their picture: 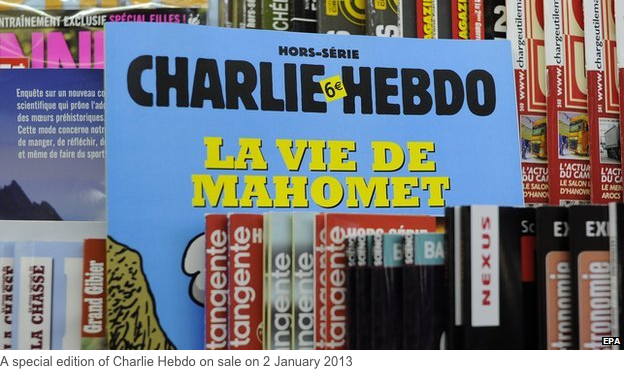 Professor Ceiling Cat, however, will reproduce the entire cover. They can come at me if they want:

What craven cowardliness on the part of you British journalists. Afraid of Muslim wrath, are you?

Finally, from Salman Rushdie, who had his own well-known troubles with censorship and threats:

Religion, a mediaeval form of unreason, when combined with modern weaponry becomes a real threat to our freedoms. This religious totalitarianism has caused a deadly mutation in the heart of Islam and we see the tragic consequences in Paris today. I stand with Charlie Hebdo, as we all must, to defend the art of satire, which has always been a force for liberty and against tyranny, dishonesty and stupidity. ‘Respect for religion’ has become a code phrase meaning ‘fear of religion.’ Religions, like all other ideas, deserve criticism, satire, and, yes, our fearless disrespect.

If any of you have websites or use Twi**er, please publish or tw**t the original and entire Charlie Hebdo Muhammad cartoon, which you can take from this post. The more often it’s reproduced, the better. If you do, weigh in below with the link.

279 thoughts on “Unknown gunmen kill twelve at “Charlie Hebdo” offices in Paris; may be related to the paper’s satires on Islam. BBC and Telegraph censor the “offending” cartoons.”