Here’s a brief report on “You, the Jury: Cats vs. Dogs“, our debate at the New Yorker Festival about the merits of these pets. (Note the correct placement of the comma in the title, as is apposite for the New Yorker.)

Despite our best efforts, Team Cat went to the d*gs last night, as the post-debate audience “applause vote” was louder for dogs than for cats. Of course the “debate” was a bit like our debates on this site about matters like free will and Jesus’s historicity: people come to the issue knowing their opinions, which almost never change.

But it was enormous fun: everyone tried to be humorous but also say something substantive, and there’s simply too much to describe about the two-hour event. I’l show some pictures of the participants, including some I took in the Green Room. (You can read more about the debaters here.)

This first set of pictures are from Fashion Magazine (??); perhaps they considered the subjects the best-dressed debaters!

Below is Ariel Levy, a New Yorker staff writer who wrote an unbearably sad and touching piece about losing her unborn child while traveling in Mongolia (read it!). It won the National Magazine award for nonfiction, and she’s turning it into a book.

Ariel was a hoot, and scuppered Team D*g by showing a photo she took of Malcolm Gladwell (on Team D*g) cuddling with her own cat (see below as well for Gladwell’s treachery). She also quoted, of all people, Thorstein Veblen on dogs! 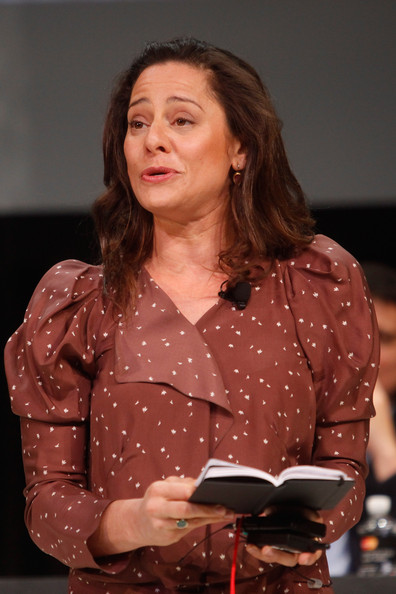 From Team D*g, Alexandra Horowitz, who is a professor of psychology at Barnard, an expert in dog cognition, and the author of a New York Times bestseller on d*gs: Inside of a D*g: What D*gs See, Smell, and Know. Curiously, Alexandra used to be a fact-checker at the New Yorker. She had a great presentation (considering her status as a d*gster) featuring videos of two dogs greeting their owners at the door, servile tails wagging furiously, contrasted with a cat “greeting” its owner: sitting placidly on the couch and then running away when the owner approached.  Team D*g made a big to-do about dog servility, which we cat-lovers do not find an appealing trait. 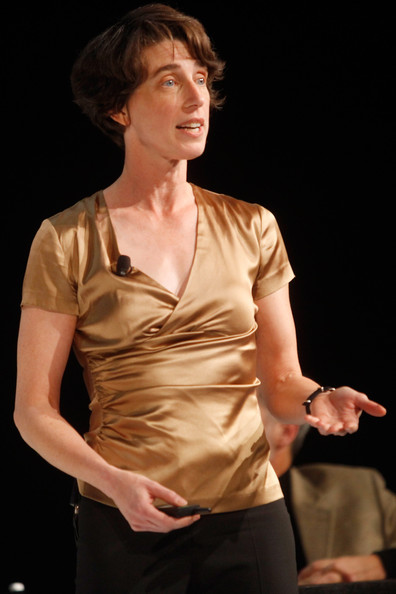 Professor Ceiling cat wearing his Hili shirt.  Sadly, the slide-clicker I had malfunctioned, putting a wrench in my presentation, but I did the best I could. I talked about how the evolutionary background of cats vs. d*gs—mainly their difference in ancestral degree of sociality—was responsible for all the things we like about cats. Behind me is an effigy of Jesse Eisenberg, who couldn’t make it but sent a hilarious video about his cat. 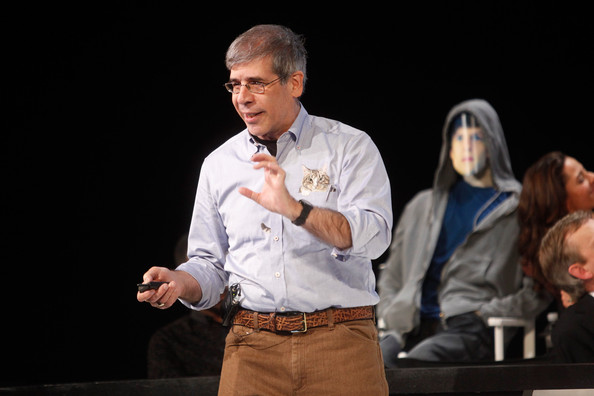 Below: Anthony Lane, leader of Team Cat and one of the New Yorker‘s two film critics. He gave the preliminary remarks and a fiery closing speech emphasizing the importance of cats in movies and writing. As I recall, one of his remarks was something like: “Really, and do you think that James Bond would have a honey-blonde love-interest named Fido Galore?” 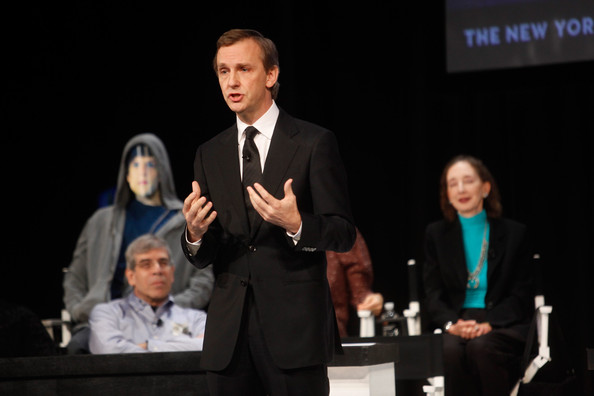 Behind him is the Eisenberg effigy, your host, and Joyce Carol Oates.

Malcolm Gladwell on Team D*g was funny, making a big megillah about how bomb-sniffing dogs were important in the war on terrorism, while cats apparently don’t give a damn about the problem. He played to the audience’s jingoism: a low blow indeed! 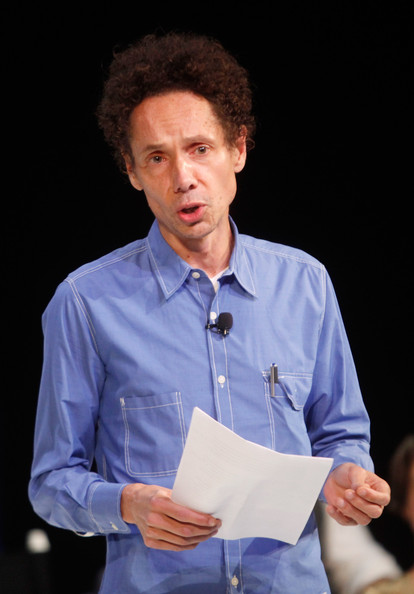 Adam Gopnik: New Yorker staff writer and a friend. His opening and closing statements for Team D*g were witty and well crafted. But more low blows: he said that cats were Republicans and d*gs were Democrats, adding that d*gs were Jewish and cats were goyim.  Whatever the merits of Adam’s appeal to politics and religiosity, it’s precisely the opposite for the owners of those animals! 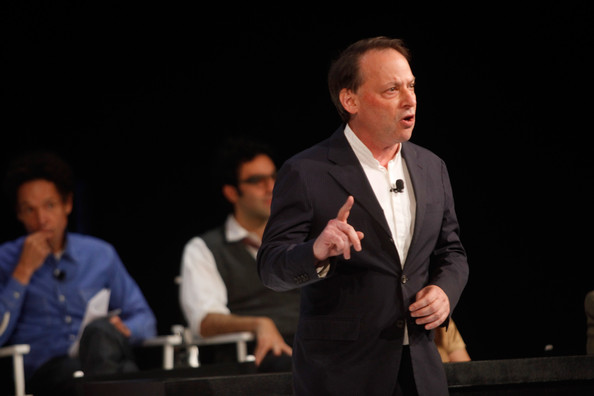 Joyce Carol Oates wrote a lovely poem that took off from Christopher Smart’s famous  verse, “For I will consider my cat Geoffrey.” Her presentation was her poem, packed with paeans to cats and disses to d*gs.  I got her to sign for me a copy of her children’s book about cats, Naughty Cherie! (her cat is named Cherie); and she and her husband Charlie Gross (a neuroscientist at Princeton) kindly invited me to dine with them at the Union Square Cafe after the event.  Joyce was gracious and personable, even though I was in awe of being in the presence of a famous author; and her husband was garrulous and full of stories. It was great fun. 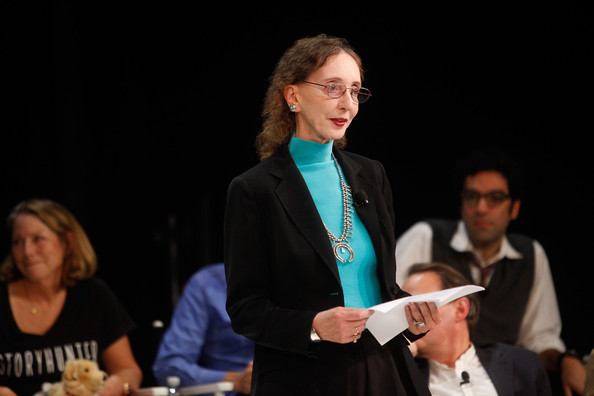 This is Jill Abramson, ex-editor of the New York Times and a member of team D*g. I didn’t catch her name at first, and we sussed it out only at dinner later when we remembered that she talked several times about how she had been “fired” in May. Her talk included displaying a golden retriever toy (you can see it on the desk) which, she said, brought her solace in her time of trouble. 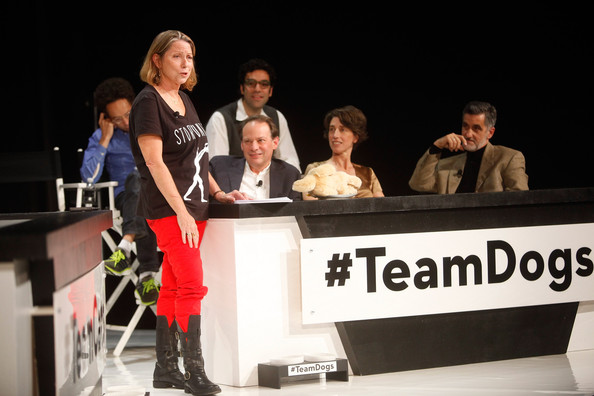 The next batch of photos below are from Getty Images, which puts a “watermark” on its pix:

David Remnick, the judge, who is the editor of The New Yorker.  He would occasionally warn people when they got too close to “the line,” as when the trainer of Sandy (the d*g appearing in the play “Annie”), displayed the d*g’s visage and said “Look at that face!” Naked appeals to cuteness were not tolerated. Remnick had a gavel that he wielded at such moments. (The audience was also not allowed to say “Awwww!”) 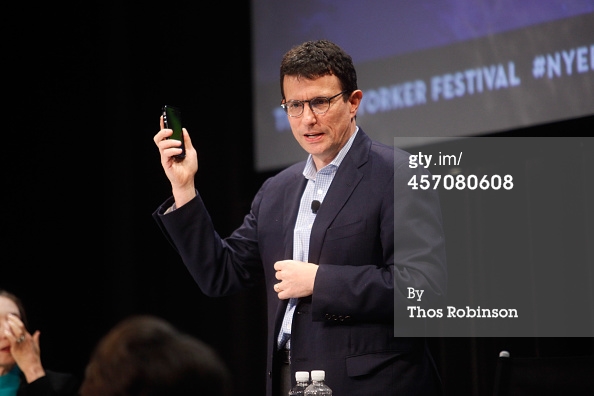 Cat-breeder and filmmaker Anthony Hutcherson displaying two of the gorgeous Bengal Cats that he breeds as a hobby. One of them was on his lap for the entire two-hour presentation, and, as I was sitting next to him, I got to pet it constantly and have it lick my hand. Everyone, including the d*gster Gladwell, was taken by these beautiful animals.  Hutcherson gave a superb talk on the role of cats in history and, countering the tiresome trope of Team D*g that dogs are good because THEY DO STUFF THAT IS GOOD FOR HUMANS (what a solipsistic view of our evolutionary cousins!), showed a slide of a police dog attacking protestors during the civil rights demonstrations of the 60s.

A lovely guy, Anthony offered members of Team Cat some of the non-show ‘reject’ Bengals that he produces. Anthony, if you’re reading this, I may take you up on that!

The Flaunting of the Bengals marked the end of Anthony’s talk, before the closing statements of Lane and Gopnik. 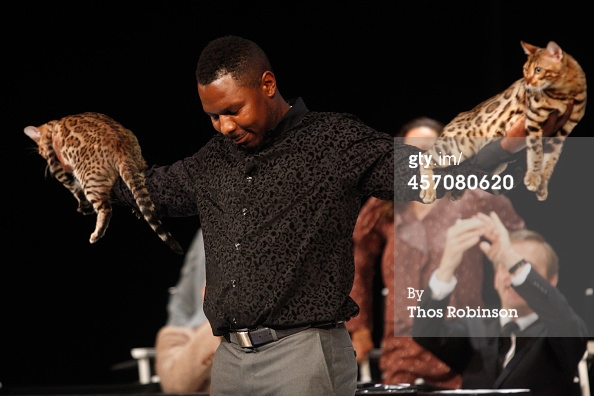 Jesse Eisenberg sent in a five-minute video from L.A. (Note: you can now watch it here.) It was side-splittingly funny. He pretended to be in Hawaii and extolling his cat Mr. Trunkles, but began turning pages of his notebook revealing the truth: his cat was holding him hostage in New York and was making him pretend they were in Hawaii. As you can see from the notebook, the secret message included “He used to be just passive aggressive.” The next page said “But now he’s just evil.” 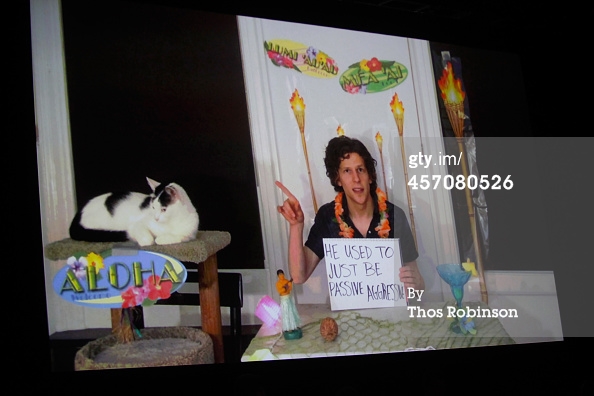 A few of my snaps from the Green Room: 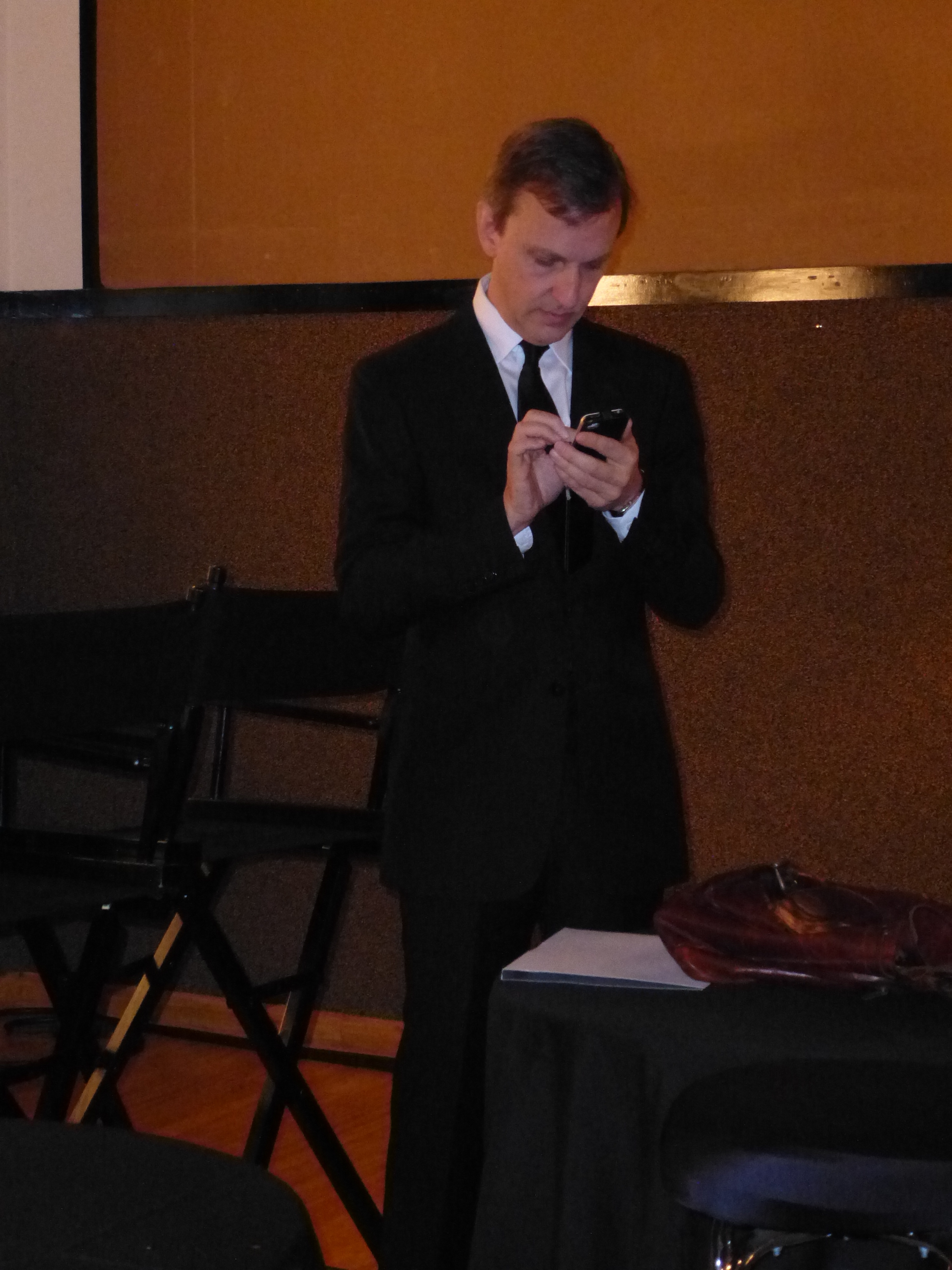 Anthony H. displaying the two Bengal Cats he brought. One of the highlights of the evening was the amount of contact I got to have with these beauteous beasts, holding them and petting them throughout the debate. They were remarkably sanguine (what cat would stay in one’s arms for two hours?), and their fur was incredibly soft. 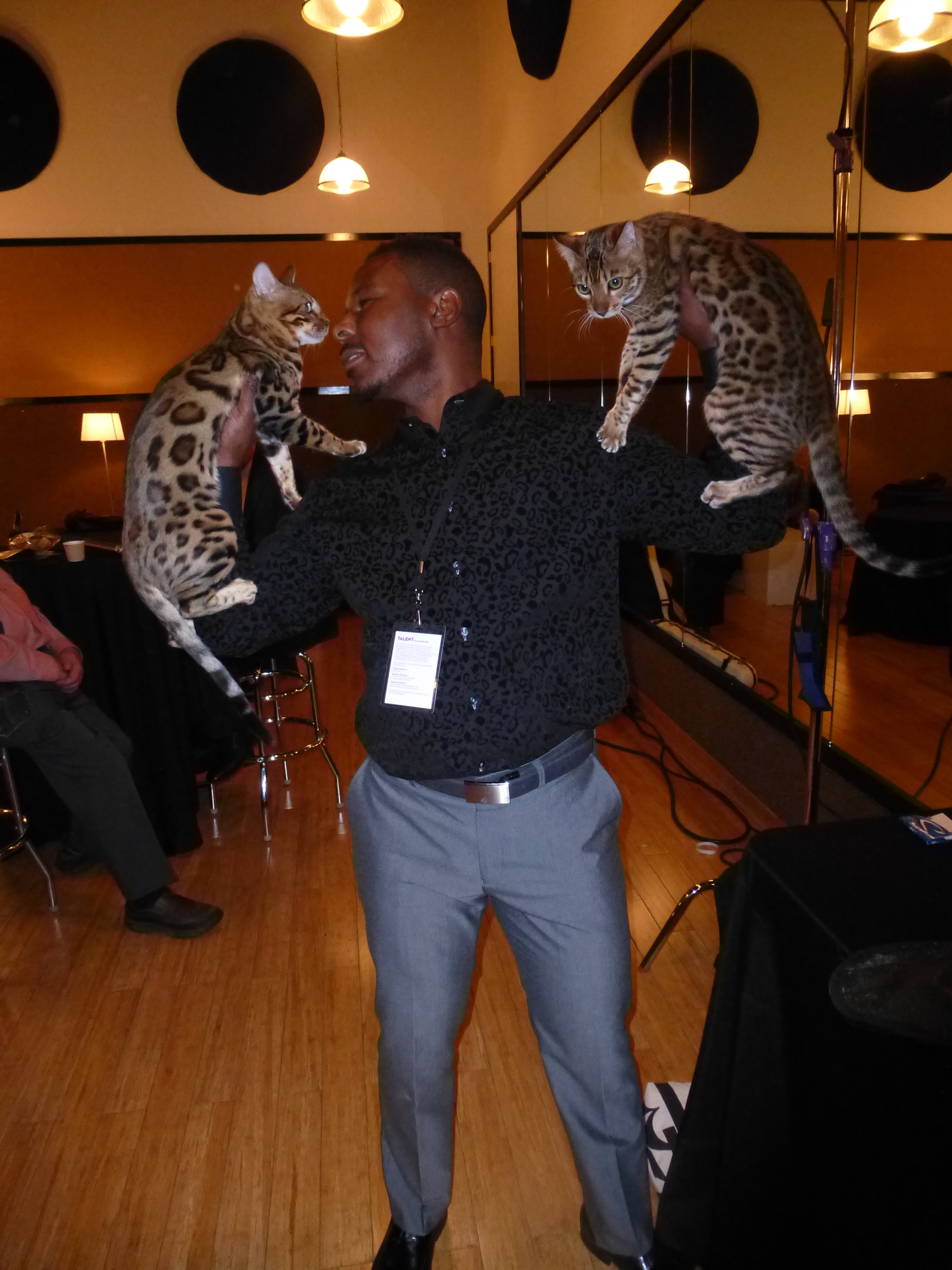 Joyce holding Jungletrax Flowmaster (I think; the other Bengal was named Jungletrax Masterpiece): 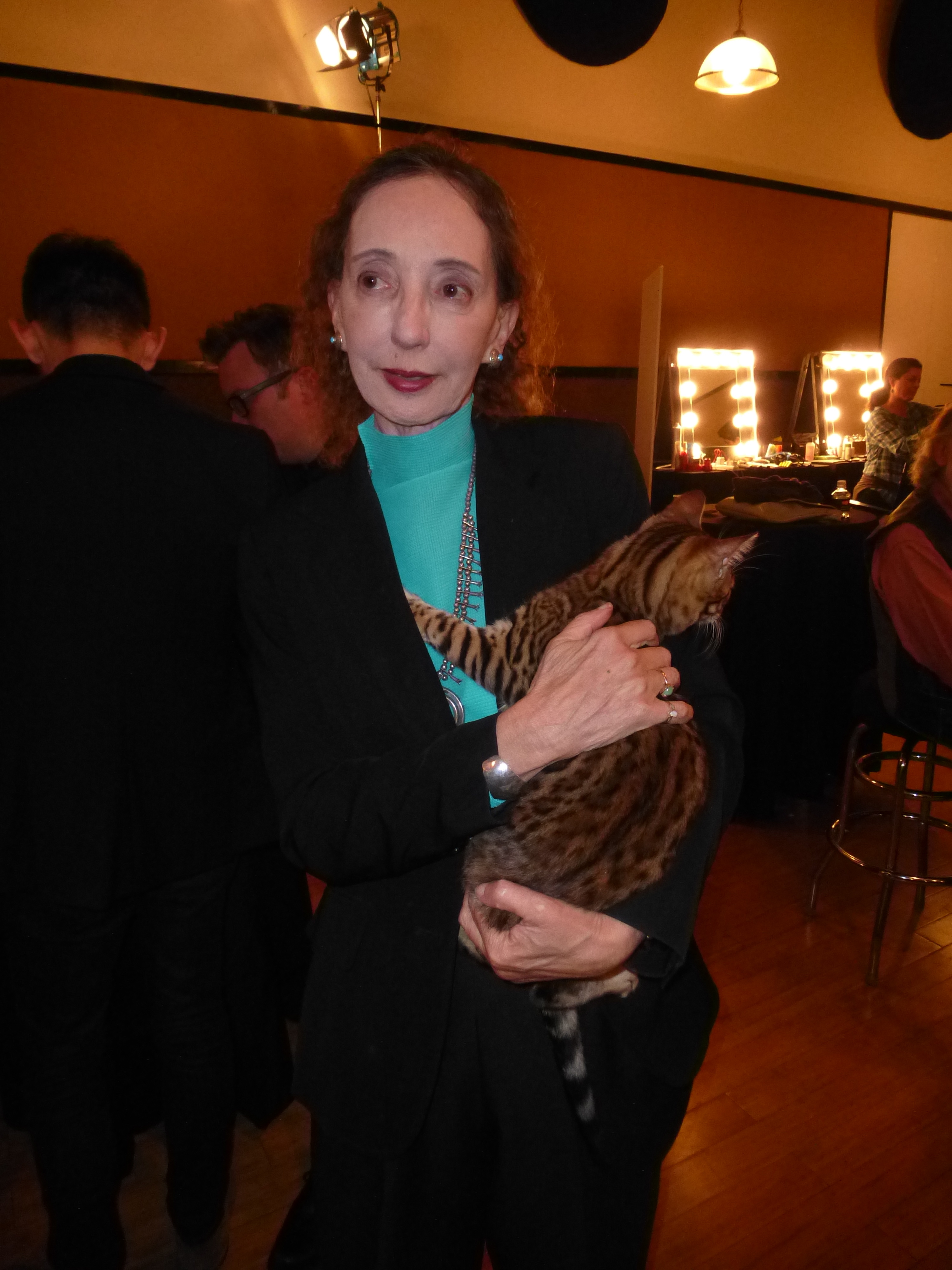 Malcolm and Ariel admiring a Bengal. Look at that face! (Malcolm’s, I mean.) As Ariel noted, Gladwell is clearly smitten with cats: he’s a two-timer! Like science and religion, you have to choose! The Bengal, of course, is diffident, taking it all as his due. 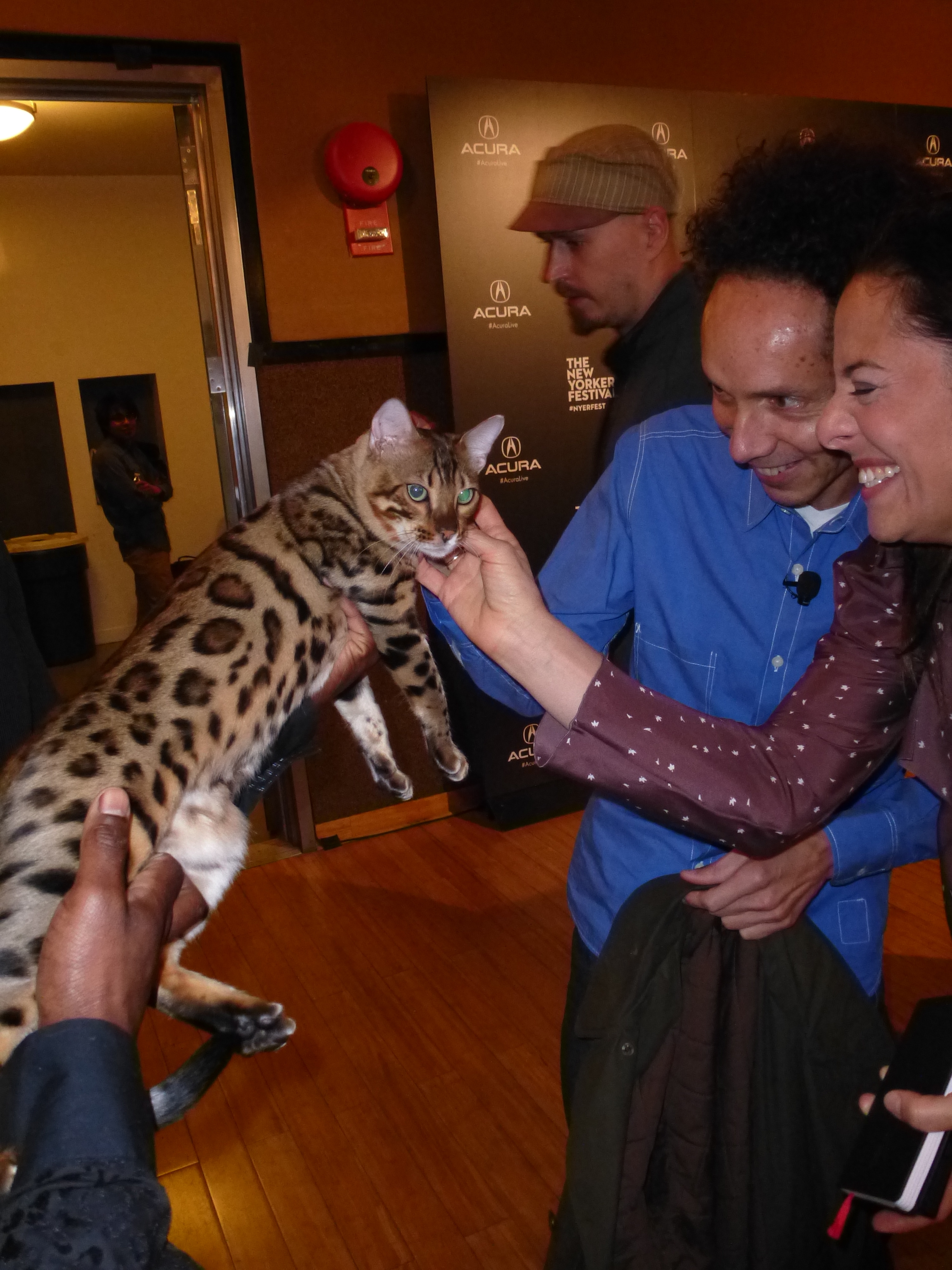 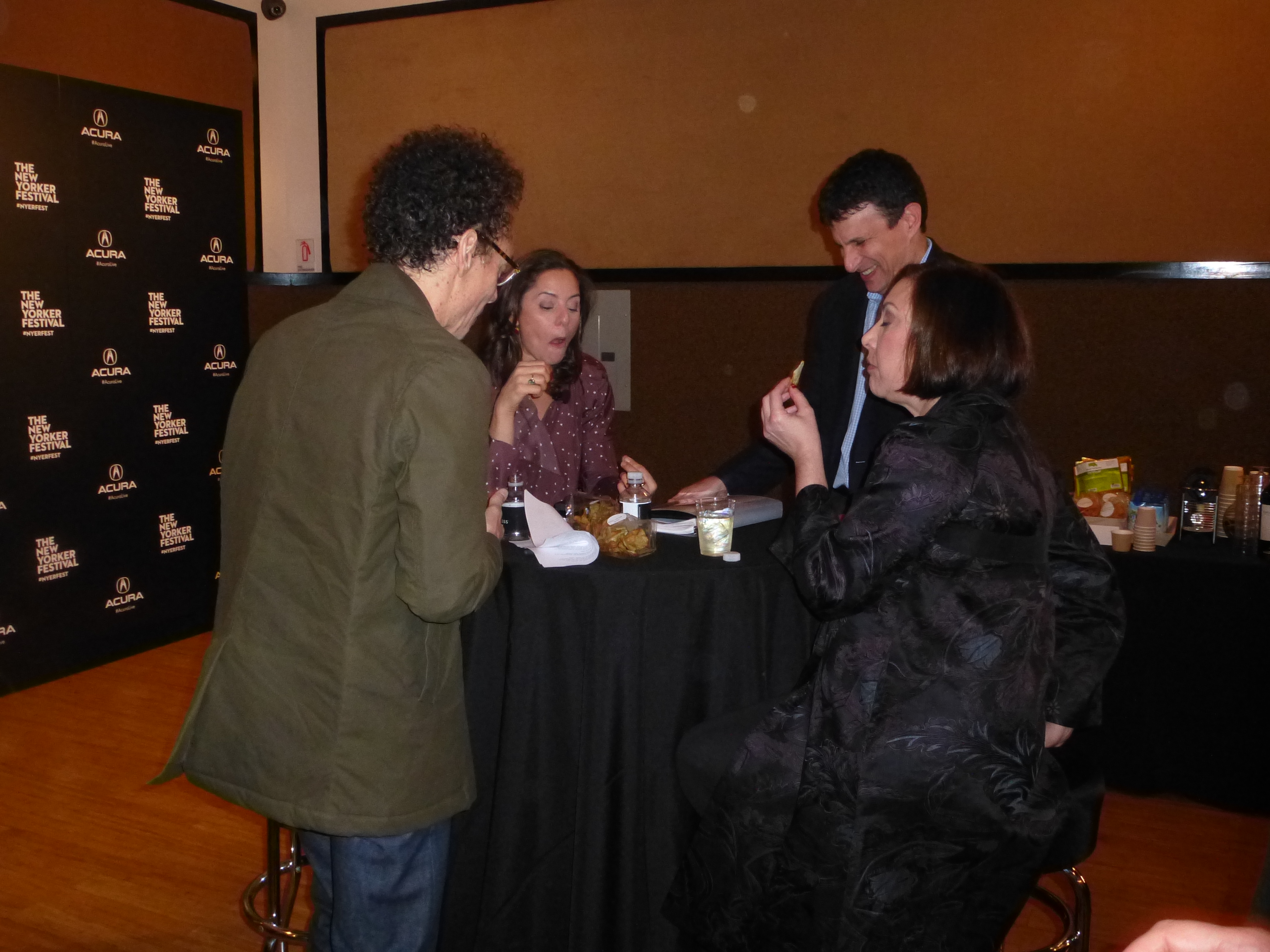 Bill Berloni, an animal trainer and debater for Team D*g, giving “Sandy” water before the show.  Berloni has trained every Sandy in every “Annie” shown on Broadway, and had the dog onstage for his presentation. His message was largely about the untrainability of cats, which from his vantage is a problem, but from ours a mitzvah. 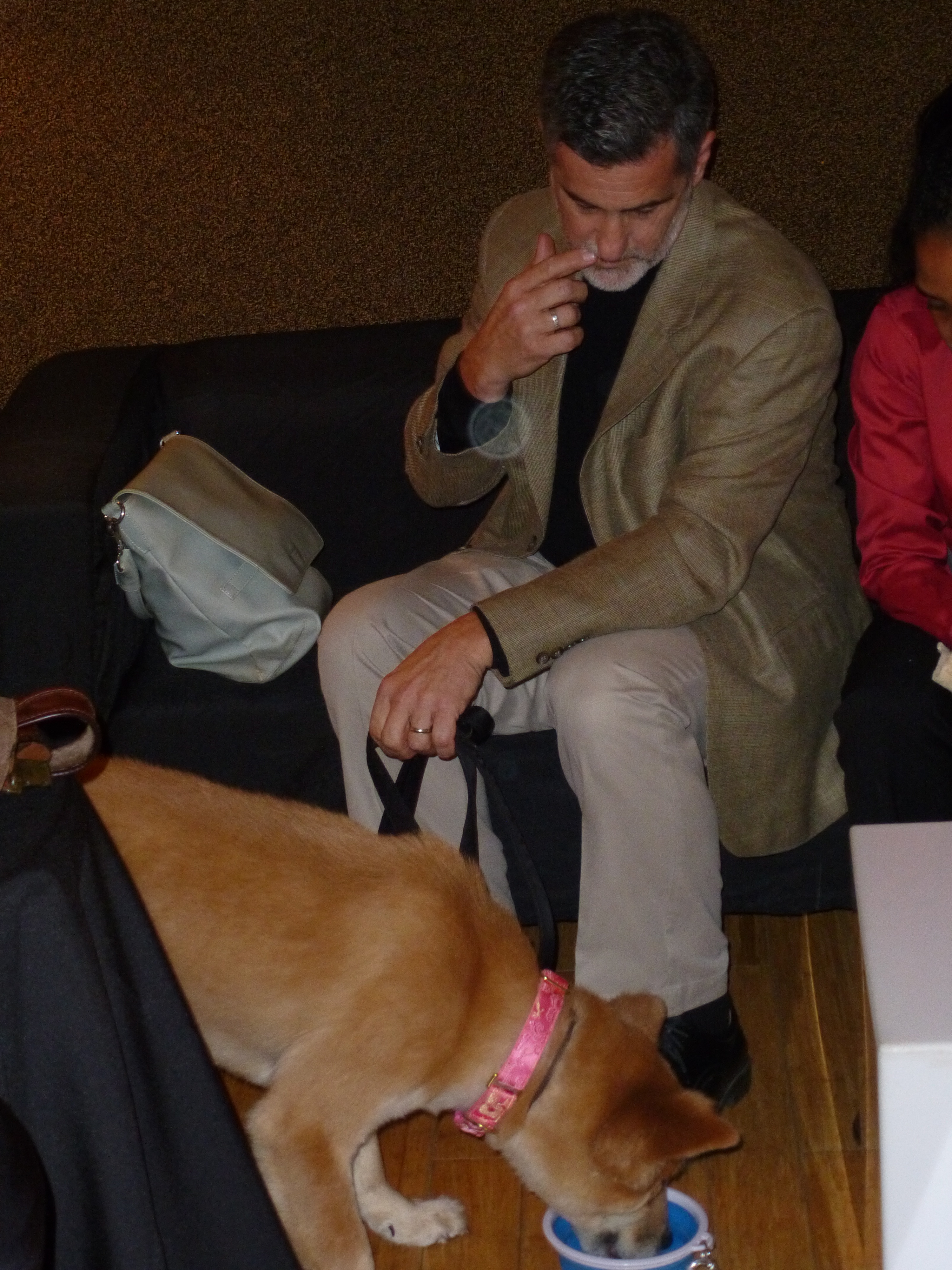 My thanks to all members of Team Cat, to Sam Karshenboym and Rhonda Sherman, who were in charge of the complicated organization of the event, to Adam Gopnik who, I’m sure, was responsible for getting me invited, and to David Remnick for chairing the event (though he was clearly on the side of Team D*g!).