She’s gone. I was at the Field Museum on Wednesday for the first time since the previous month, and the removal of Sue the Tyrannosaurus rex has been completed.

Viewed from the balcony above, visitors walk through Stanley Field Hall, seemingly unaware of the ghostly white outline of Sue’s now departed plinth.

A sign explained where Sue will eventually show up. 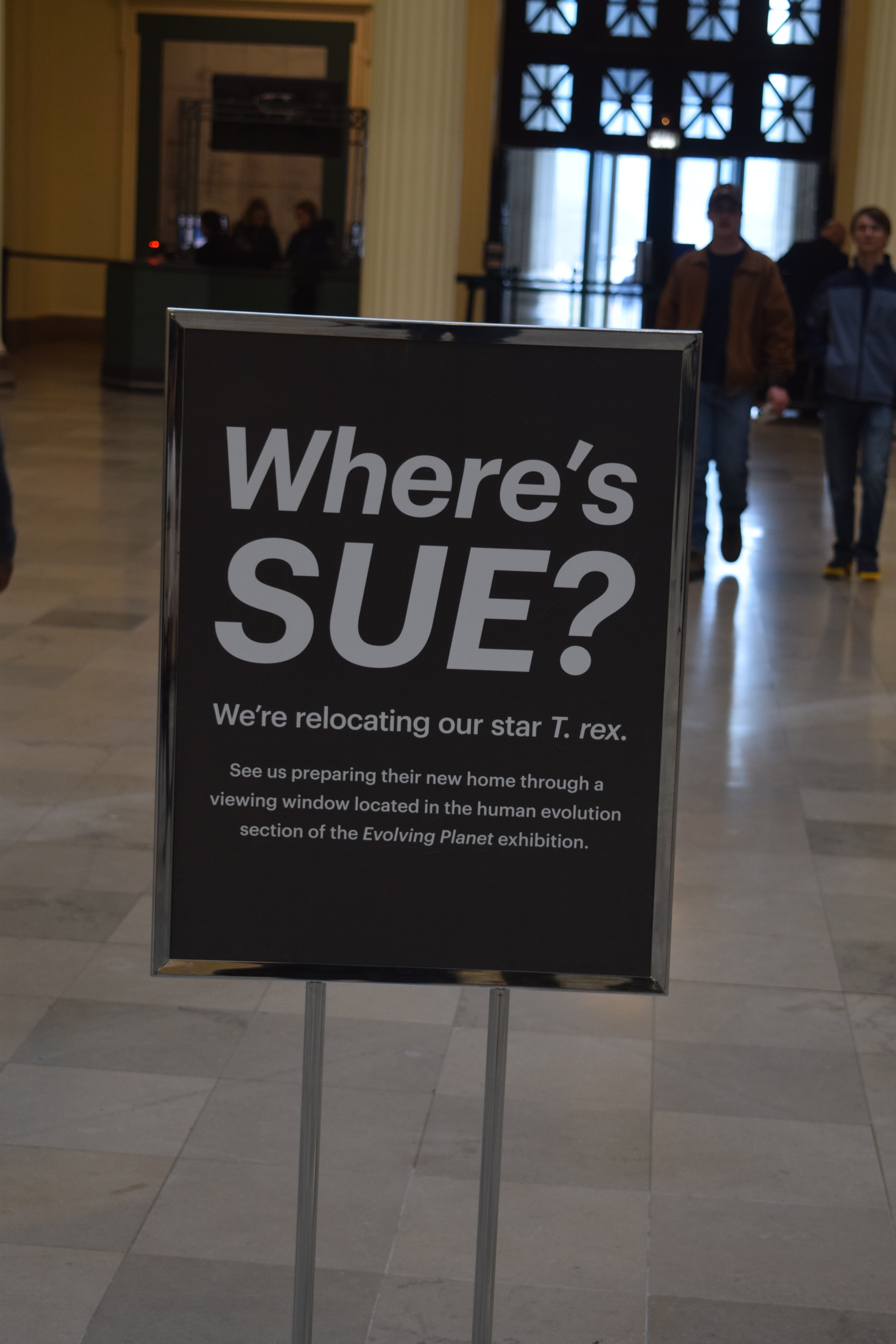 Sue’s actually not gone away entirely, for the second floor balcony display, featuring Sue’s real skull, remains in place. [JAC: the skull was always up there as it was too heavy to mount on the skeleton downstairs.] 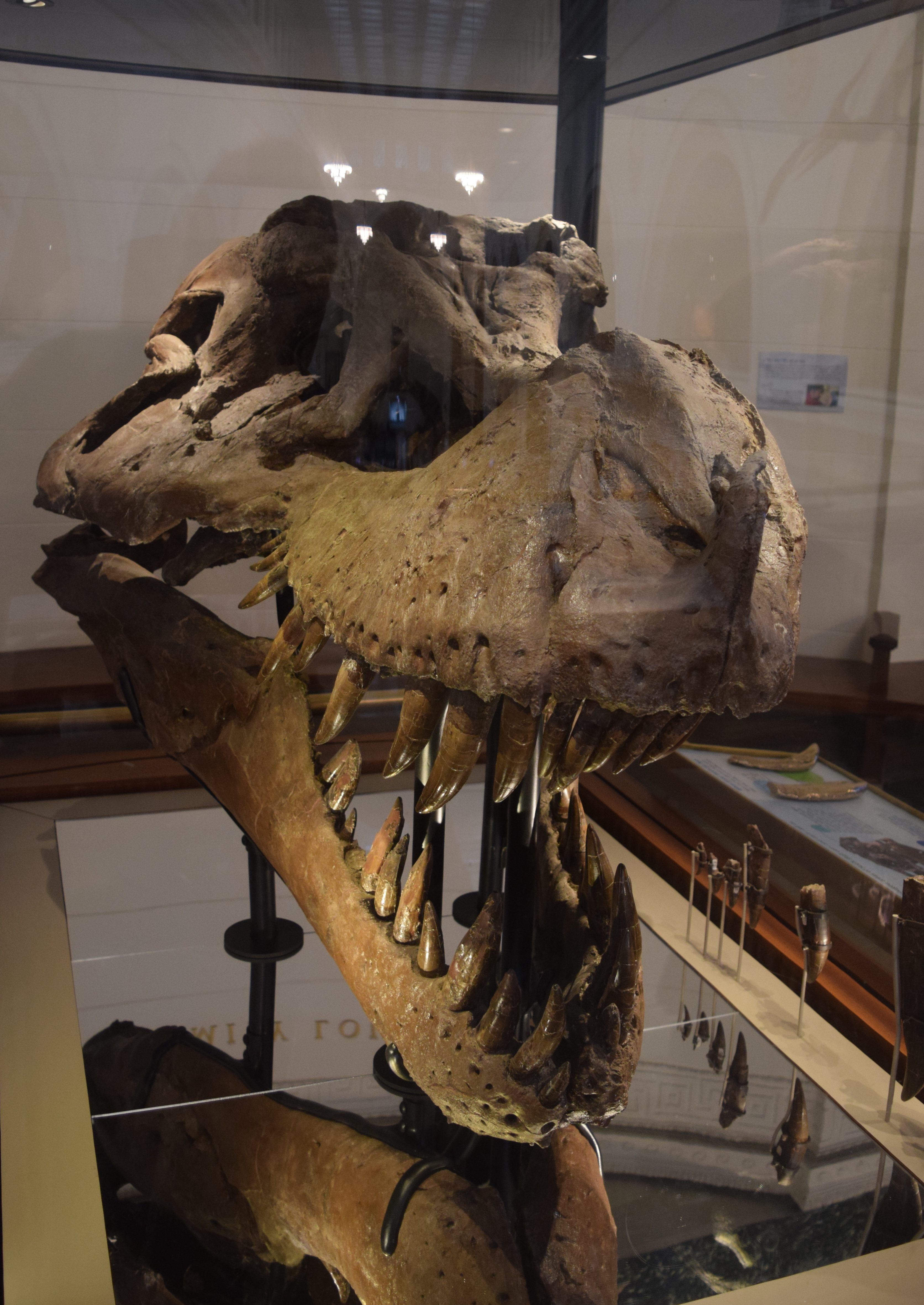 The second floor display also includes touchable, life-size, bronze models of various parts of Sue, including the (relatively) tiny forearm. Devotees of the concept of unity of type, and Neil Shubin‘s Your Inner Fish in particular, will recognize the “one bone, two bones, many bones” pattern found throughout the tetrapod vertebrates and their piscine forebears.

A closeup of the digits; the two distalmost phalanges of the outer (lower, in this photo) digit were among the few bones missing from Sue’s skeleton, and the ones in the model are based on Albertosaurus, a related theropod dinosaur.

From up on the balcony, I could also get a better look at the model of Pteranodon longiceps hanging from the ceiling.

And zooming in a bit. 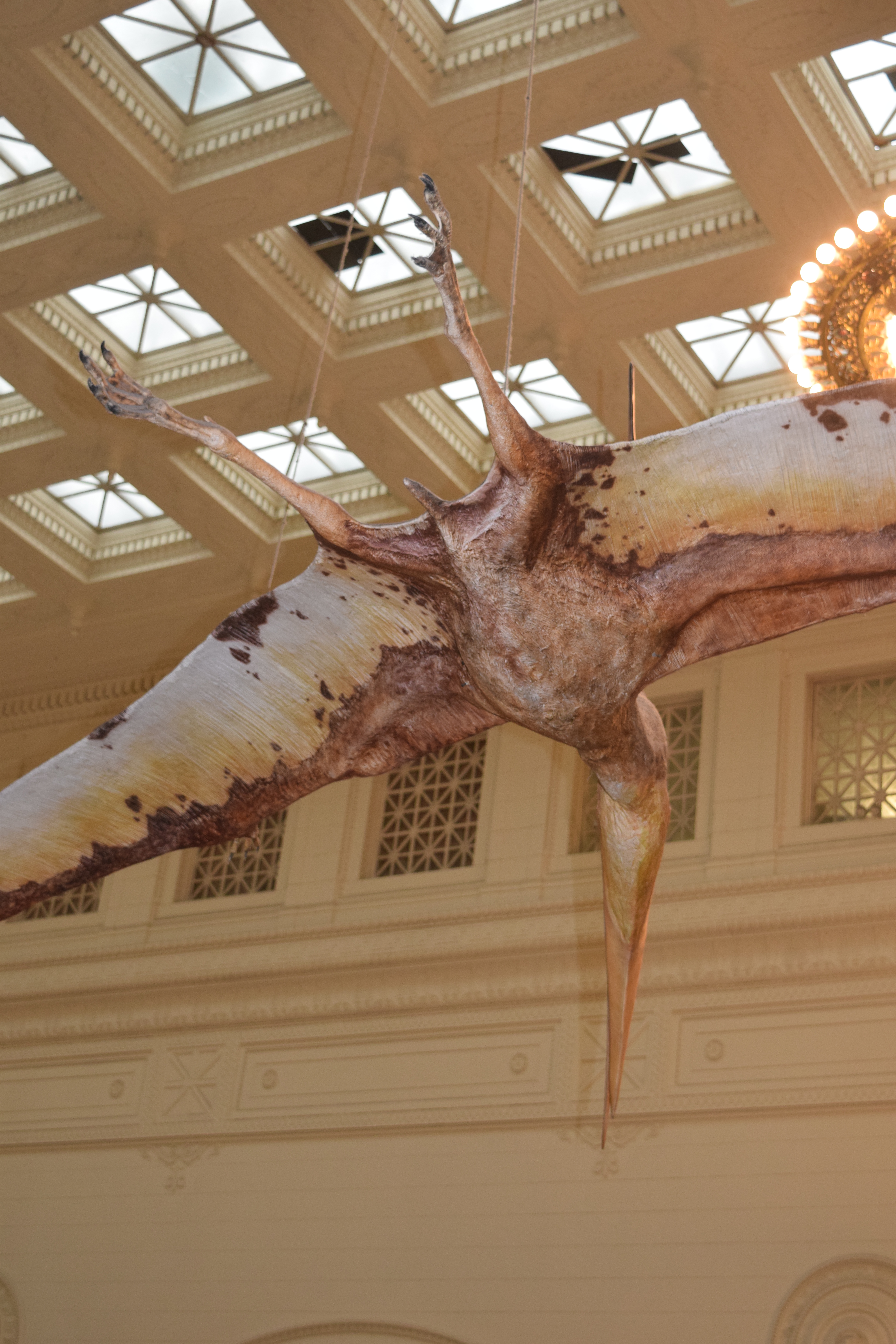 Does the position of this model mean that Pteranodon is Ceiling Reptile?

Sue, the iconic Tyrannosaurus rex that has inhabited the Field Museum of Natural History‘s Stanley Field Hall since 2000, is coming down. But, shortly after she comes down, she’ll be going up– upstairs that is.  The Museum announced plans last year to replace Sue in Stanley Field Hall with a model of Patagotitan mayorum, a much larger dinosaur than Tyrannosaurus rex. At the same time, they’ll be adding plants and pterosaurs to the Hall. Bill Simpson (who for some reason appears to be being assisted by Ricky Gervais) explains what’s going to happen to her in this video. (And continue watching the next video, also featuring Bill, that comes up after the first finishes.)

A similar model of Patagotitan has been on display at the American Museum of Natural History in New York for a couple of years now. It doesn’t even fit in the dinosaur hall there, and its head and neck poke out into the hall way to greet visitors arriving by elevator! Sue will be moving upstairs to the Field’s second floor, whose balconies overlook the Hall, where she’ll join the rest of the dinosaurs in the Evolving Planet exhibit. Sue is a theropod, and though in the same order of dinosaurs as Patagotitan, which was a sauropod, Sue and her kin ate creatures like Patagotitan and its kin.

I had gotten to see Sue up close during the study and preparation phases prior to her being placed on exhibit, and wanted to say farewell (for a little while), so I went down to see her before the deconstruction. These are pictures from a visit in late December.

I went down again last month, and took a few more pictures, mostly closer shots of interesting parts of her anatomy.

The tale of how Sue got from South Dakota to the Field Museum is a long and tortuous one, and not very edifying; but that’s a story for another post.

In WEIT I describe and show a picture of birdlike sleeping behavior in theropod dinosaurs: a fossil was discovered of a therpod sleeping with its head tucked underneath its forelimb (and tail curled around), a posture nearly identical to the sleeping posture of modern birds. Now an article has appeared in PLoS (Public Library of Science) showing even more birdlike behavior of theropods: “Bird-Like Anatomy, Posture, and Behavior Revealed by an Early Jurassic Theropod Dinosaur Resting Trace,” by Andrew R. C. Milner, Jerald D. Harris, Martin G. Lockley, James I. Kirkland, and Neffra A. Matthews, which you can find here.

It turns out that Milner et al. uncovered several sets of theropod tracks from fine Utah sandstone about 198 million years old. They show the impressions of theropods of the species Eubrontes gigante and Dilophosaurus wetherilli walking (and dragging their tails), as well as resting on both hind AND front legs. (Front-leg impressions are rare in theropods since they were obligately bipedal.) When the beast rested, it brought its hindlimbs (manus) together symmetrically (in line) and rested its forlimbs (pes) on the ground, with the hands pointing inwards (see the impressions in the original article showing handprints). The authors conclude that theropod hands always faced inwards when the arms were stretched out–a configuration identical to that of modern birds. Apparently the palms-in position evolved very early in the theropods, presumably to help them grasp prey.

The more we learn about theropods, the more we see that many of the features that were later co-opted in flight were “pre-adaptations”–that is, traits evolved for one use in the theropods that were later hijacked for flying by their bird descendants. Another such feature is feathers, which we’ll discuss tomorrow. Clearly, the evolution of birds from dinosaurs was not as mysterious and maladaptive as touted by creationists. As is usual in evolution, new adaptations are simply old ones that have been refashioned.

Reconstruction of the theropod Dilophosaurus wetherilli resting after having walked on mud. Note inward-facing palms. See original paper for the tracks that led to this reconstruction. Drawing taken from Milner et al. paper.