Jennifer A. “Jenny” Clack,  Emeritus Professor and Curator of Vertebrate Palaeontology in the University Museum of Zoology, Cambridge, died on 26 March of this year. Jenny, as she was universally known, was one of the leading paleontologists of the past half century, making fundamental discoveries about the origin of tetrapods, and training, through her students and postdocs, many of the current generation of leaders in the field. The cause of her death was cancer.

Even before finishing her degree, Jenny took a position in the University Museum of Zoology, Cambridge, where she remained until her death, eventually rising to Professor and Curator. At Cambridge, she found unstudied material of the ‘co-first’ tetrapod, Acanthostega, collected by a Cambridge expedition to Greenland in 1970. It was study of these important specimens that led to Jenny’s most important and influential work, on the origin of tetrapods from their piscine (fish) ancestors. Jenny led two expeditions to collect more material in Greenland, in 1987 and 1998, revisiting the sites at which earlier specimens had been collected, and gathering new material not just of Acanthostega, but of the other ‘co-first’ tetrapod, Ichthyostega, which prior to Jenny’s work had been the better known of the two. Jenny and her colleagues, in addition to the material at Cambridge or newly collected, were able to study Erik Jarvik‘s Ichthyostega material in Stockholm.

Along with work by others on other forms (such as Tiktaalik and Panderichthys), Jenny’s work on these earliest tetrapods has made the fish-amphibian transition one of the best understood of all transitions between higher taxa (although much is still to be learned!). Jenny summarized the work of her and her colleagues in Gaining Ground: the Origin and Evolution of Tetrapods (Indiana University Press, Bloomington, 2002; 2nd edition 2012). Jenny also worked on a number of other related issues in vertebrate evolution–including the evolution of the ear, faunistic works, and Carboniferous fishes, to name a few–but she will be best remembered for her work on the transition from water to land, and especially the transition from fin to limb. 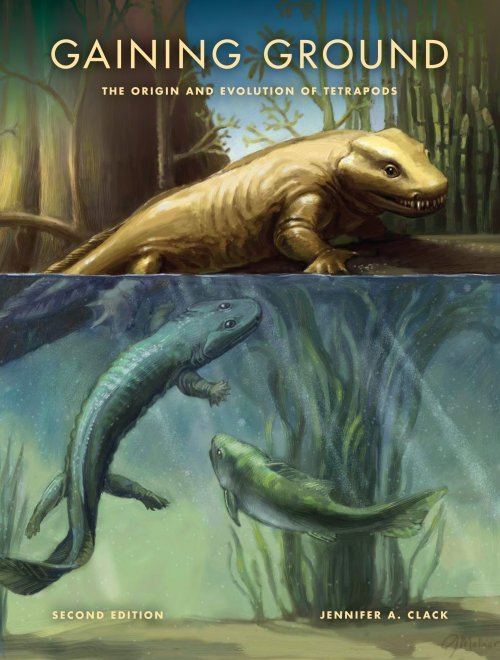 In addition to her scientific work, Jenny was actively involved in outreach to the general public, in which she conveyed the wonder, interest, and importance of her discoveries. She appeared in numerous video and television programs, including Nova’s The Missing Link (2002), in which she was referred to as the “Diva of the Devonian”; was a featured scientist in the PBS program based on Neil Shubin’s work, Your Inner Fish (2014); and was the subject of an episode of Beautiful Minds (2012) on the BBC. Here’s a short video from Cambridge University (which I could embed; another nice, short, video, The First Vertebrate Walks on Land (2001), which I could not embed, can be seen on Shape of Life, an educational website).

Last year, Jenny was honored by her colleagues, students, and collaborators with a festschrift, “Fossils, Function and Phylogeny: Papers on Early Vertebrate Evolution in Honour of Professor Jennifer A. Clack”, published in the Earth and Environmental Science Transactions of The Royal Society of Edinburgh. 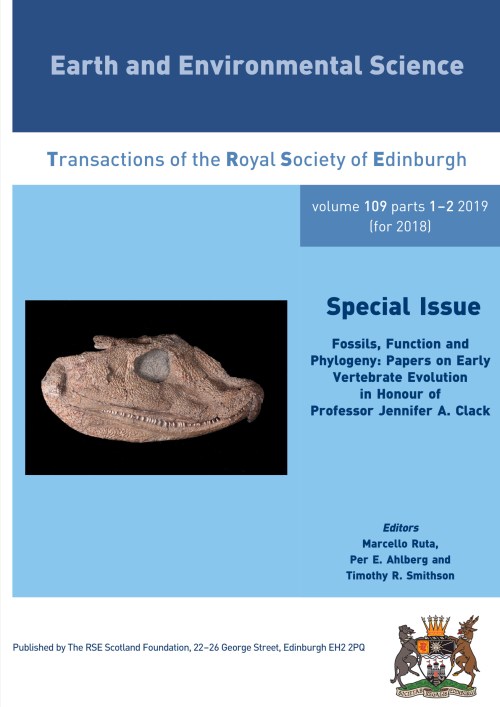 Memorial notices and recollections have appeared by Tim Smithson in the Guardian, Per Ahlberg in Nature, Darren Naish at Tetrapod Zoology, and from her colleagues in the Cambridge Department of Zoology. I have drawn from these sources, Jenny’s own website, and the paper by Marcello Ruta, Per Ahlberg, and Tim Smithson in the Edinburgh festschrift for many of the facts above.

I found out about her death only about a month ago (perhaps part of my pandemic disconnect from the wider world–I spent most of three months at a poorly lit table in my basement). While reading her latest paper (published in November), I was shocked to notice the notation “Deceased” among the authors’ addresses. I could not think of who it could be. Two of the other authors were known to me–Tim Smithson, Jenny’s long-time colleague, and Stephanie Pierce, curator of vertebrate paleontology at the Museum of Comparative Zoology; the senior author turned out to be a recently minted Ph.D. student of Pierce’s–and, looking more closely, I saw that it was Jenny. A Harvard Gazette article provides a layman’s account of that latest paper, a functional analysis of the humeri (upper arm bones) of early tetrapods and close relatives. (The tetrapods’ piscine ancestors already had humeri.)

Jerry and I both followed her work. I taught a special topics seminar on her book, Gaining Ground, when the second edition came out in 2012, and I attended a symposium on “The Origin and Diversification of Stem Tetrapods” she organized at the Society of Vertebrate Paleontology meetings hosted by the Field Museum in 1997. I don’t think we ever met, either then or at some other meeting we might both have attended, but she was such a lively personality on the Your Inner Fish documentary series on PBS that I feel that I know what it would have been like to meet her.

Clack, J. A. 1987. Pholiderpeton scutigerum, an amphibian from the Yorkshire Coal Measures. Philosophical Transaction of the Royal Society of London B 318:1–107. pdf (Her Ph.D. work.)

Thanks to Carl Zimmer for pointing out a new paper by Jenny Clack in Evolution: Education and Outreach: “The Fish-Tetrapod Transition: New Fossils and Interpretations.” This is a good paper for the non-scientist who wants to know more about the documentation of this important transition. In WEIT I wrote mostly about the Tiktaalik roseae transitional form, largely because a lot of work on that fossil was done by my colleague Neil Shubin. I was criticized by some for not mentioning the other important fossils in this sequence, and Clack’s article fills this gap very well. Highly recommended.