The other day Steven Pinker received a form letter from Ann Bostrom, one of the Board of Directors of the American Association for the Advancement of Science (AAAS), asking for money to support action on climate change. (Bostrom is also a professor of environmental policy at the University of Washington.)  The AAAS also publishes Science, one of a handful of the world’s best science journals.

Below is part of Bostrom’s letter (her entire solicitation is below the fold; bolding is hers):

My research career has focused primarily on two important areas: Risk perception, communication, and management; and environmental policy and decision-making.Though these are two distinct areas of study, I see them as two sides of the same coin. If key decisionmakers—like politicians on Capitol Hill—don’t understand the risks of climate change, how likely are they to pass meaningful policies to mitigate those risks? If someone is deeply concerned about climate change, but doesn’t believe the government can effectively address it, how strongly will they support policy action?My personal quest to answer questions like these keeps leading me back to the same conclusion: It is essential that each of us support and uplift science to inform and spur action on climate change.

That’s why this Earth Day, I am asking 300 generous donors to step up and make a tax-deductible gift to the AAAS Flexible Action Fund to support our nearly 175-year-strong mission to build trust in science and fortify key decision-making with evidence. Can I count on you to be one of them?

As you’ll see from his response below, Steve was distressed by the invitation and the AAAS itself. His complaint? That the AAAS is being unscientific and counterproductive in its strategy to enhance scientific literacy and action on climate change. The organization is and has been unscientific in assuming that rejection of science is simply caused by a deficit in knowledge; and it’s been oblivious to empirical data suggesting that this rejection is in fact largely political—a problem the AAAS relentlessly exacerbates with its recent but aggressive left-wing branding. Finally, Steve argues that the organization’s steadfast refusal even to consider alternative explanations to left-wing orthodoxy leaves it proposing what are probably ineffectual solutions to major problems. There is, for example, no mention of nuclear power.

(Steve also reproduces a tendentious and offensive tweet that one of the organization’s former editors issued attacking journalist Jesse Singal and psychologist Paul Bloom. This is just one example of how ideology has permeated the journal.)

Needless to say, Pinker refused to become one of the “generous donors”, and chided the AAAS for politicizing science in its “lurch to the left.” That politicization, he feels—and I agree—is a strong impediment to the objectivity needed to solve any scientific problem. Climate change is one such problem, and its solution is hampered by tribalism.

Steve gave me permission to post his response to Ann Bostrom, which I’ve put below. He also received a short response from Holden Thorp, Editor-in-Chief of the Science family of journals, which I also have permission to publish.

First, go below to the fold to read Bostrom’s solicitation, and then read Pinker’s response here (with tweets enclosed). Finally, read Thorp’s tepid response—actually a nonresponse.

Pinker’s response to the solicitation:

I recently received your solicitation for a donation to the AAAS. I share with you an interest in risk perception and communication, as well as environmental policy, topics which I explore in my recent books Rationality and Enlightenment Now. I also share your concern that politicians on Capitol Hill, and the American public, be aware of the risks of anthropogenic climate change and how they can be reduced.

For precisely these reasons I cannot in good conscience agree to your request to donate money to the AAAS. The Association is currently making these hazards worse, not better.

First, it is astonishing that an association for the advancement of science does not take a scientific approach to public acceptance of scientific conclusions. The letter that went out over your name assumes that the problem is a lack of access to scientific evidence. Yet as I’m sure you’re aware, studies of public opinion by Dan Kahan and others have shown that deniers of the scientific consensus on climate change, evolution, and Covid are no less informed than believers. Presentation of scientific arguments, moreover, does little to change their mind.

The difference is political: the farther someone is to the right, the less they believe the scientists on these hot-button issues. My own experience as a scientific communicator confirms that there is enormous distrust of the scientific and academic establishments, because people believe these establishments have been captured by the political left and that any dissent from orthodoxy will be met with censorship or cancellation.

The solution is obvious. Scientific organizations must cultivate a reputation for objectivity, neutrality, openness to debate, and consideration of evidence for alternative hypotheses. Yet it is precisely in these areas that the AAAS, including Science magazine, have been making the problem worse.

I will give three examples of how the AAAS appears to be going out of its way to alienate any politician or citizen who is not a strong leftist.

“Wind energy in the United States”

“Biomass energy in the United States”

“Hydropower in the United States”

“Renewable energy in the United States”

“Geothermal energy in the United States”

“Solar energy in the United States”

Notice anything missing? There is nothing on nuclear energy in the United States. This is despite the fact that nuclear energy is currently the carbon-free source that exceeds every one of these alternatives in US energy consumption, and despite the fact that such esteemed climate and energy scientists as James Hansen, Ken Caldeira, and Kerry Emanuel have written that “in the real world there is no credible path to climate stabilization that does not include a substantial role for nuclear power”,

For the AAAS to omit any mention of nuclear power in its resource for journalists on climate change is deeply irresponsible and can only be explained by the fact that nuclear power fell out of fashion among left-wing and Green political factions more than 40 years ago.

As best I can tell, awareness of the hazards of politicization of science among the officers of AAAS and the editors of Science is zero. Certainly the issue has not been broached in its communications or the pages of the magazine. Yet this lurch to the left is distorting their coverage of vital scientific issues such as climate change, and is in danger of alienating the majority of American legislators and citizens who are not hard leftists.

I urge the AAAS and the editors of Science to become mindful of this vital issue for the future of science in this country.

Solicitation letter from Prof. Ann Bostrom [JAC: below the fold] 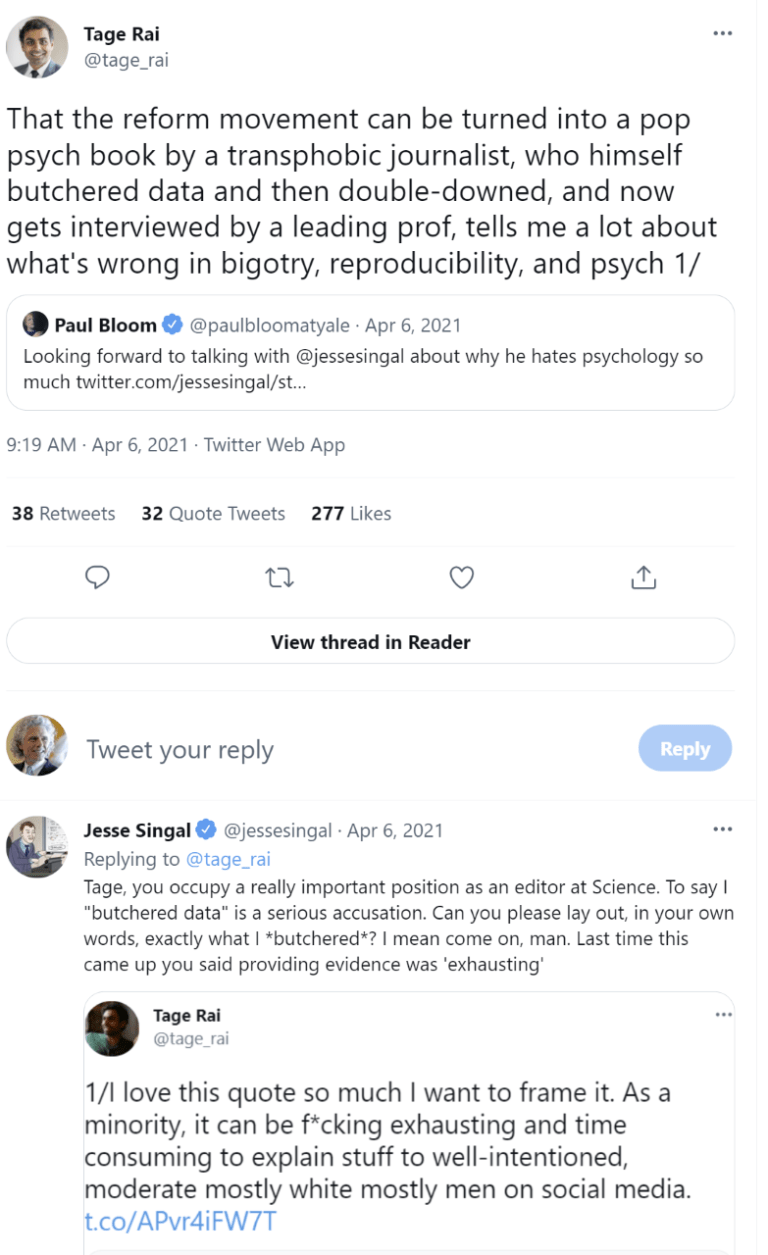 Here’s the AAAS’s response to Pinker from Holden Thorp, the Editor in Chief of Science and its stable of journals. (I’ve redacted phone numbers and email addresses.)

Thanks for your note.  We’re sorry to lose you as a donor, but I disagree with your analysis.  We will continue to cover the evidence for and impact of systemic racism.   Thanks for your support of AAAS in the past.

JAC:  Thorp’s non-response is disturbing. “I disagree with your analysis,” he says. Does that include the issues of both systemic racism and nuclear power.? We don’t know, as Thorp doesn’t mention what he disagrees with!

Pinker is an AAAS Fellow and crafted a long and reasoned argument. He surely deserved more than a “thanks, but no thanks” reply from the editor of Science!

This suggests that Thorp is simply not interested in engaging with a reasoned argument, wedded as he is to Science‘s “wokeist” ideology. And believe me, I’ve seen that wokeism many times, not just in Science but in Nature and its own stable of journals.

The explicit wedding of the world’s two premier science journals to political ideology is not a good sign, as it prioritizes politics over science. And all too often, politically infused science is ineffective science.