The Roman Catholic Archdiocese of Washington is delighted to offer you an exorcism if you’re a person of their faith who worships in their bailiwick, and also nees some demons expelled.  You have to apply forthe service, and you can either have a person or a place exorcised.

This process, of course, explicitly assumes the existence of the Evil One (probably Satan, but perhaps his demons), and his ability to do harm:

The Rite of Exorcism is a sacramental of the Catholic Church whereby “the Church asks publicly and authoritatively in the name of Jesus Christ that a person or object be protected against the power of the Evil One and withdrawn from his dominion” (Catechism of the Catholic Church #1673). It is “directed at the expulsion of demons or to the liberation from demonic possession through the spiritual authority which Jesus entrusted to His Church (ibid.).” 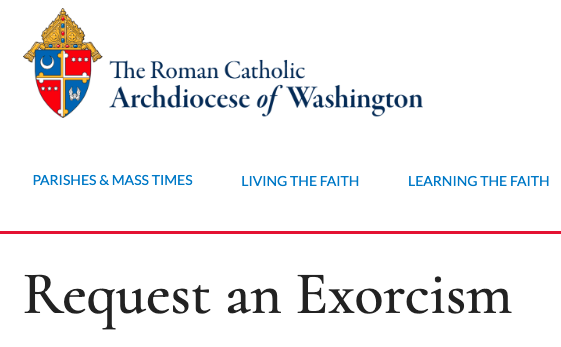 A few tips for applying from the site:

Procedures for Requesting an Exorcism

Persons seeking an exorcism from the Archdiocese should follow the protocol below:

Or, if your house is bedeviled by the Evil One:

Procedure for the Minor Exorcism of a Place

A minor exorcism of place, such as exorcizing a home, may be prayed by any priest with faculties to minister within the Archdiocese.

This refutes the claim of those who argue that religion is not about factual beliefs. For the whole megillah presumes not only the existence of Satan and demons, but also their ability to possess people or places and make bad things happen. Further, they argue that the rite of exorcism can get rid of these malign forces.

Seriously, this is still maintained by the Catholic Church and used by those who share those beliefs.  Here’s a Catholic exorcism in the Philippines:

The efficacy of exorcism could of course be tested, although the placebo effect here is strong. For example, if the Church determines that someone with epilepsy is possessed by The Evil One, they could see if an exorcism would cure the condition. (Of course, you’d need a control group: Catholic but unexorcised.) But I’m pretty sure that they wouldn’t approve of an exorcism in this case—or in other cases that could be tested. This renders this ridiculous belief immune to disconfirmation, like Carl Sagan’s fire-breathing dragon. Sagan was, I’m sure, partly motivated by religion (and other unevidenced beliefs) when he wrote this:

. . . Once again, the only sensible approach is tentatively to reject the dragon hypothesis, to be open to future physical data, and to wonder what the cause might be that so many apparently sane and sober people share the same strange delusion.