Today’s reader introduces himself and his pictures below. Semyon’s words are indented, and you can click the photos to enlarge them. I believe this is the first Russian contributor we’ve had. Welcome!

My name is Semyon Morozov. I’m sending you my wildlife photos.

These photos were taken in August 2016 in my small homeland, Kurgan Oblast (Russia, the south of the West Siberian Plain). Photo hunting was successful at that time!

Here’s a female wasp spider (Argiope bruennichi). Look at these white things on her web: they are called stabilimenta. Their function is not completely clear. Scientists assumed that these structures stabilized the web, but then other explanations appeared, such as protection from predators or attracting prey. 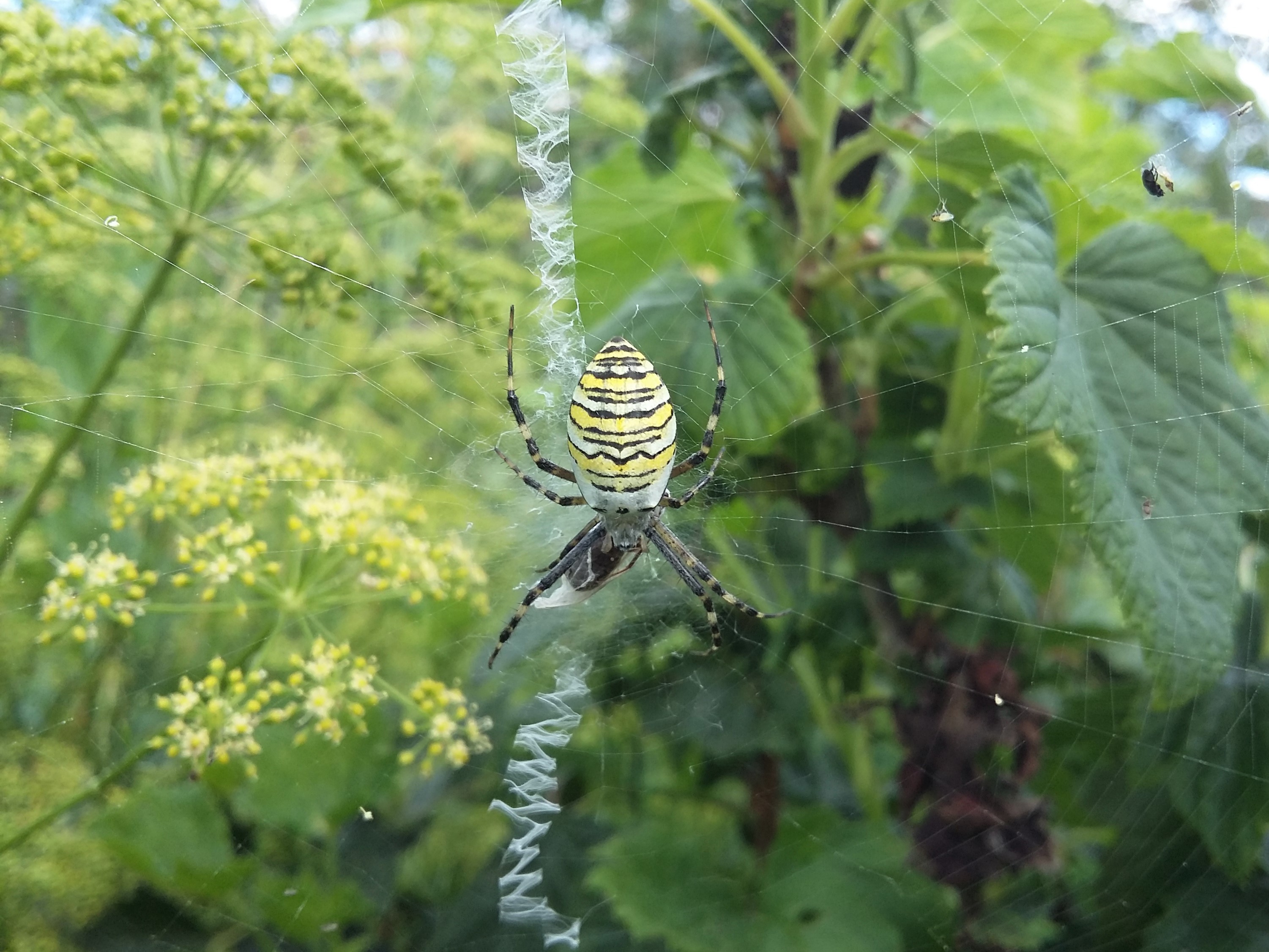 Eurydema ventralis is a shield bug that feeds on crucifers and some other plants. The bug sits on a leaf of Parthenocissus that has been cut by a leafcutter bee (Megachile sp.). 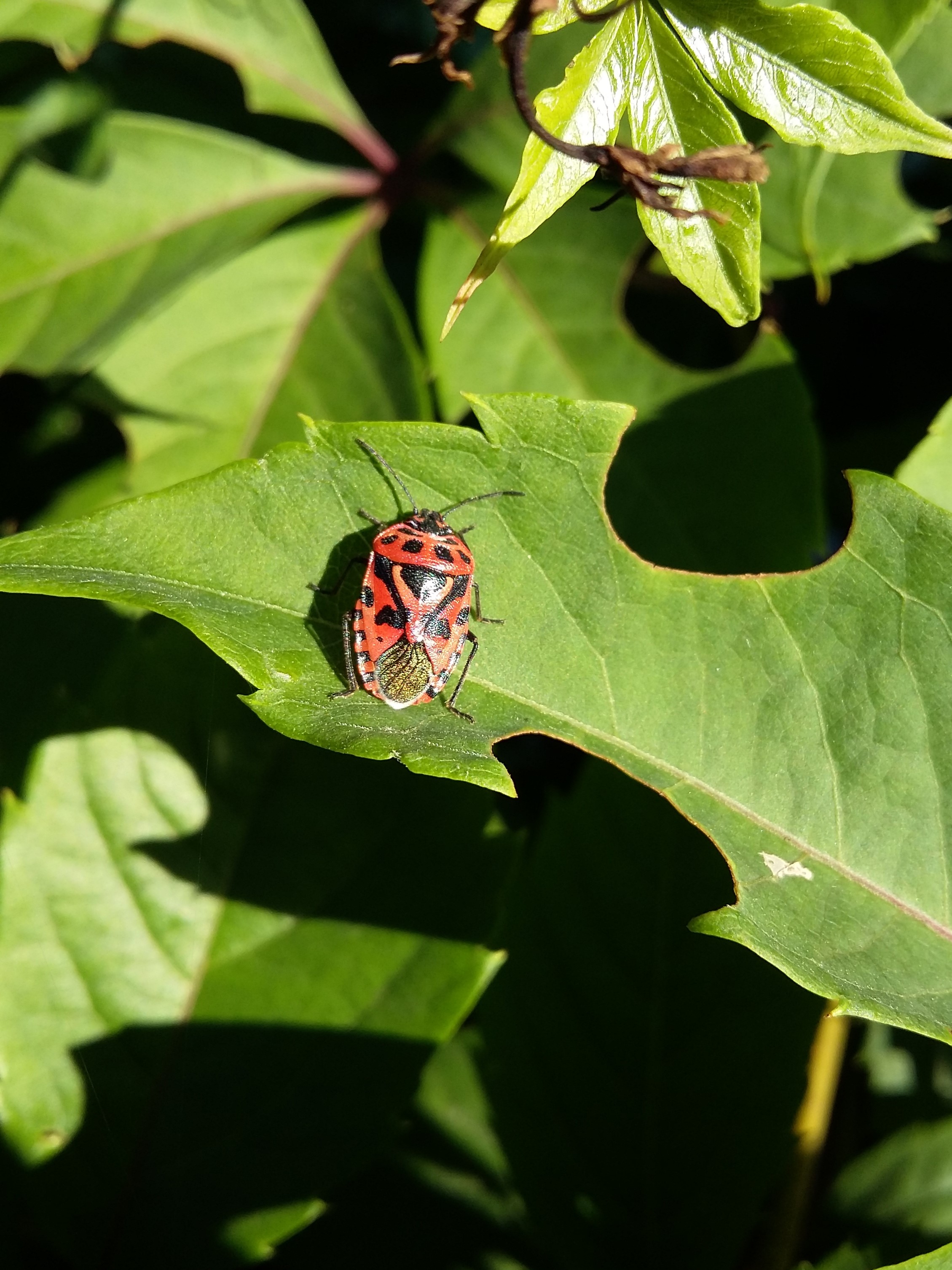 The yellow-winged darter (Sympetrum flaveolum) is one of the most common dragonflies in this area. 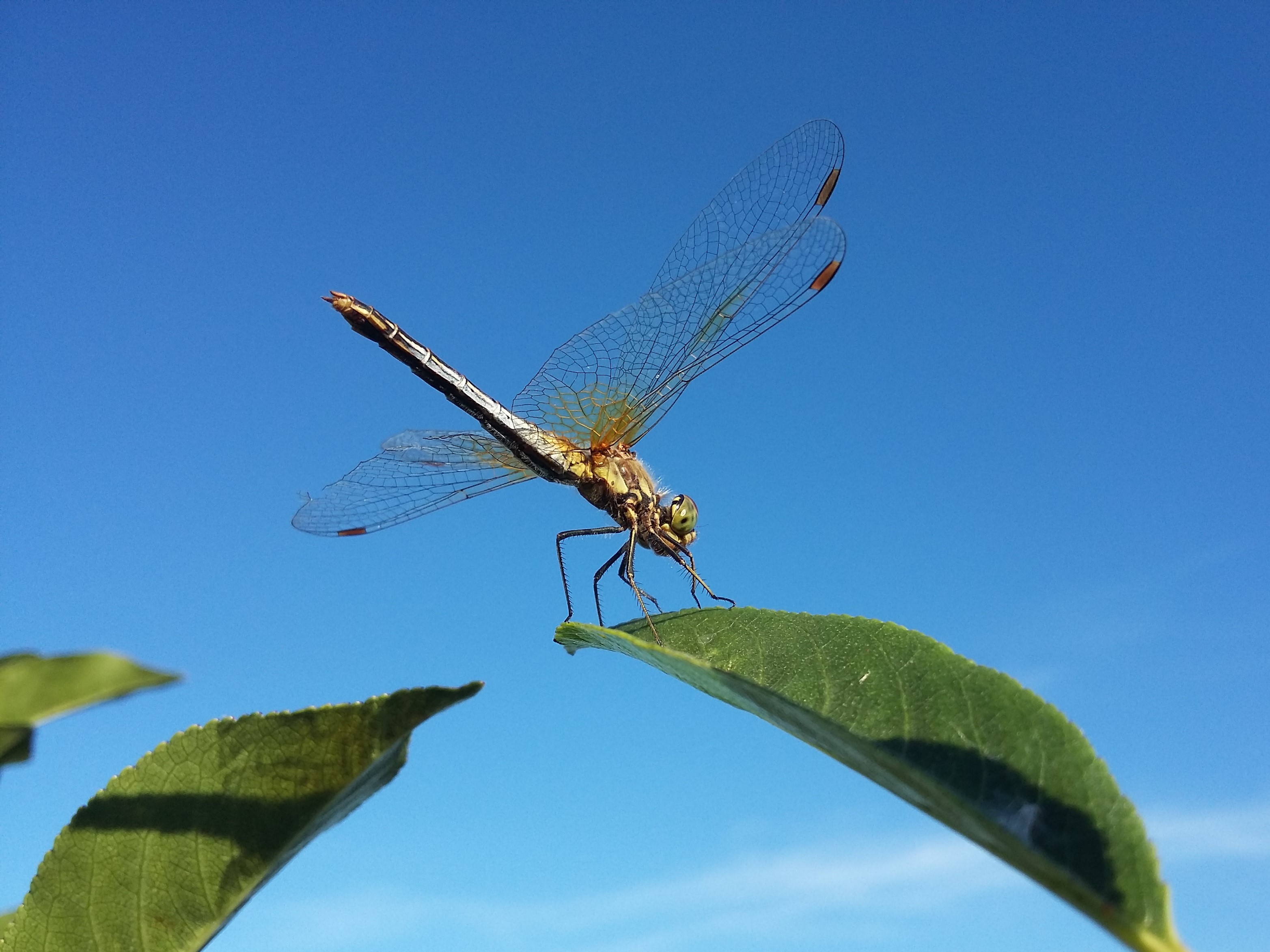 This is an odd caterpillar of the grey dagger (Acronicta psi). It was ready to pupate, so I took it home for observation. 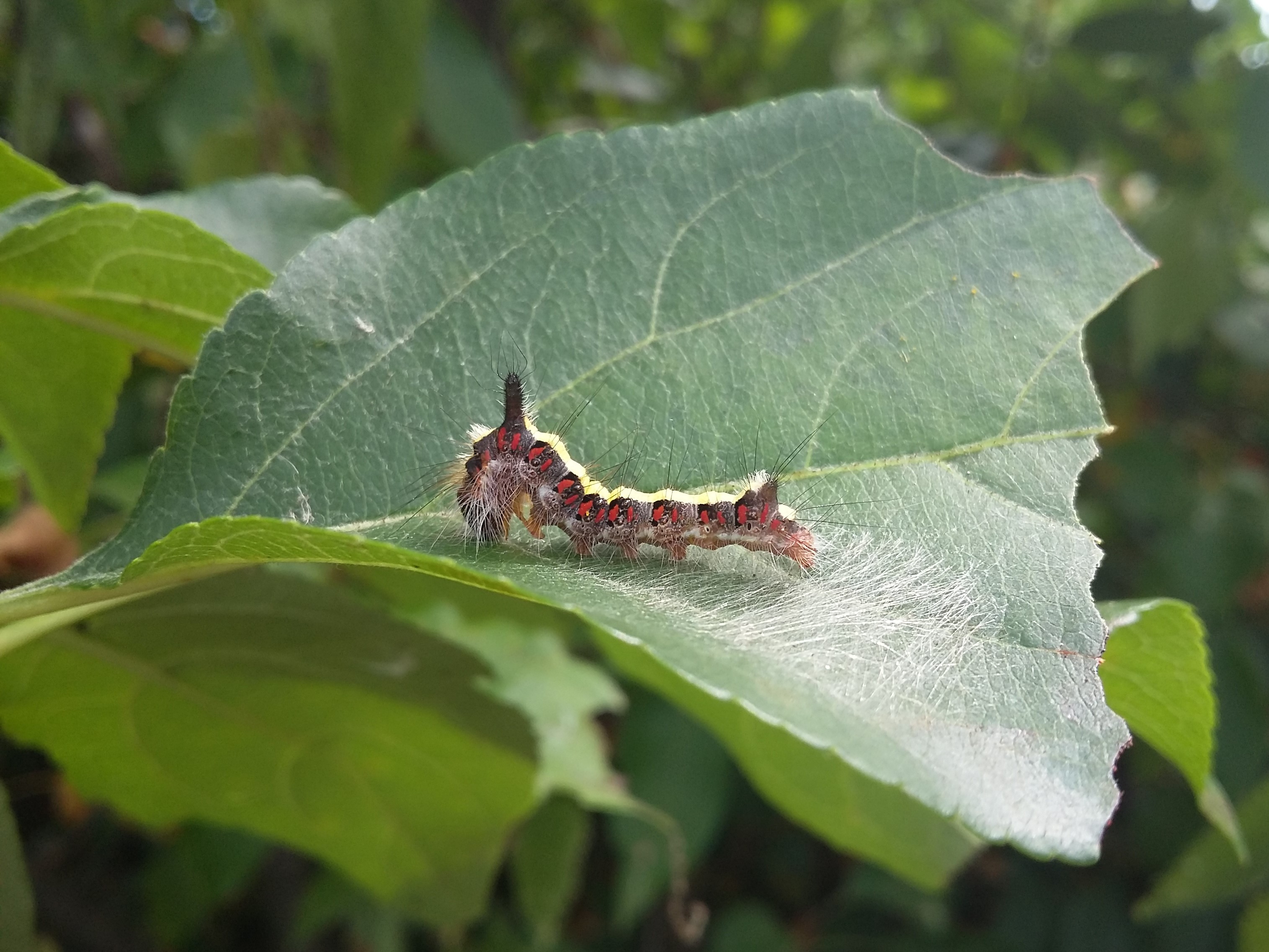 But instead, a fat larva of some parasitoid wasp crawled out of the caterpillar! Then the larva pupated, and after 16 days an imago appeared from the pupa. 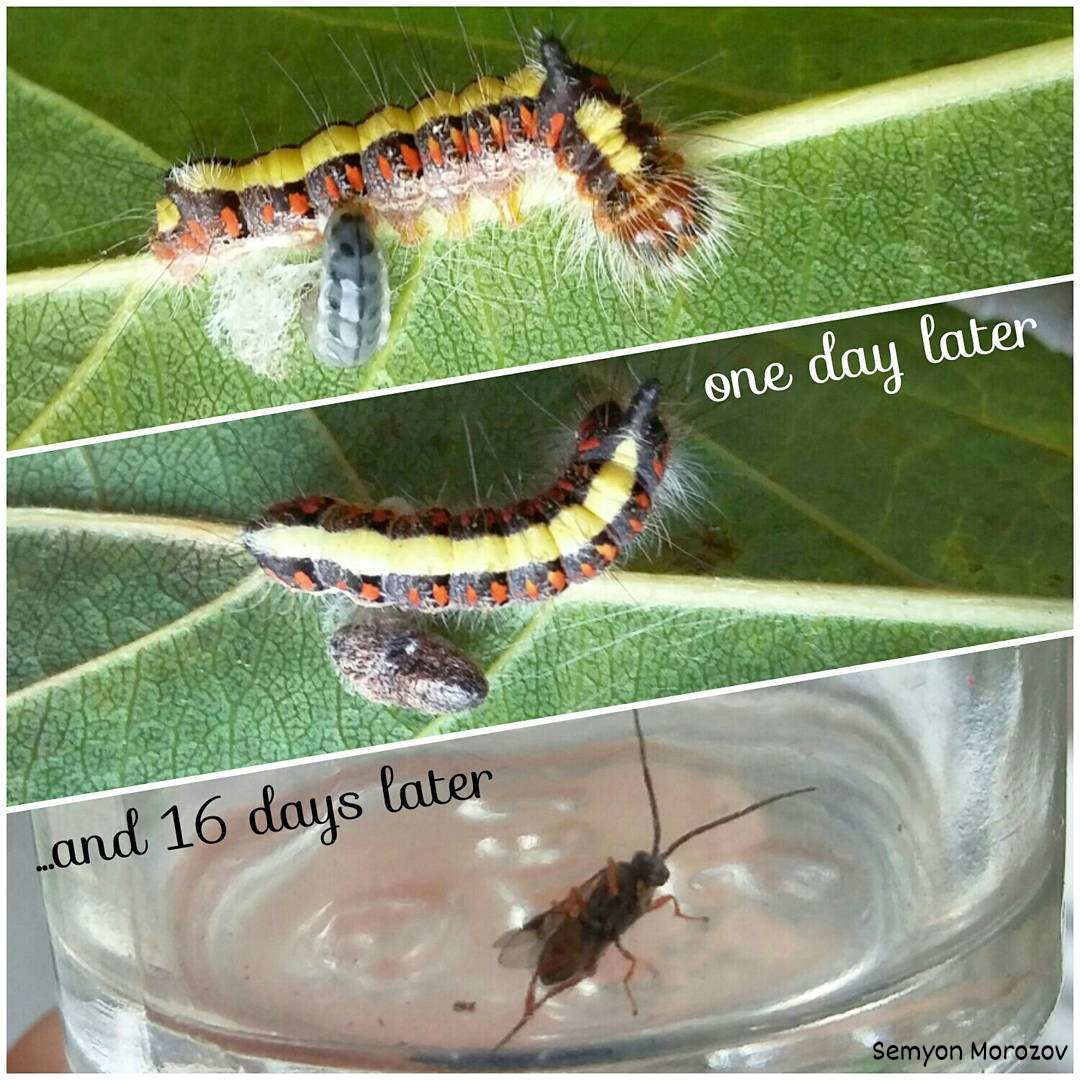 And here’s the Roesel’s bush-cricket (Roeseliana roeselii). This individual has a saber-like ovipositor at the end of the abdomen, which indicates that it’s a female. 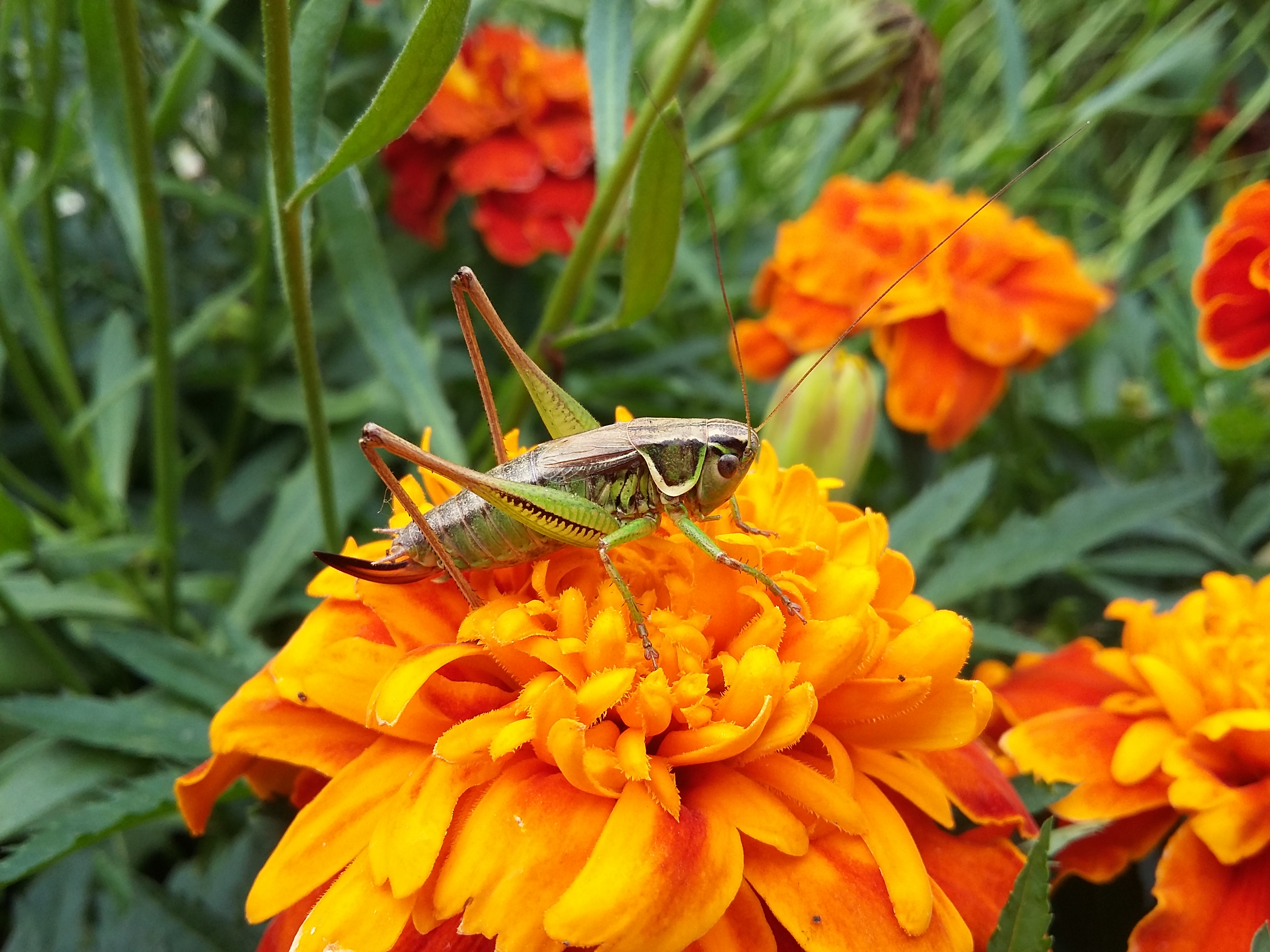 All these arthropods were dwellers of the garden. Now let’s go beyond it. What are these cupcake-like things on the rotten stump? These are the fruiting bodies (aethalia) of the slime mold (Fuligo septica, I guess). These are not fungi but organisms, the life cycle of which includes both a single-celled amoeba-like stage and a macroscopic one. 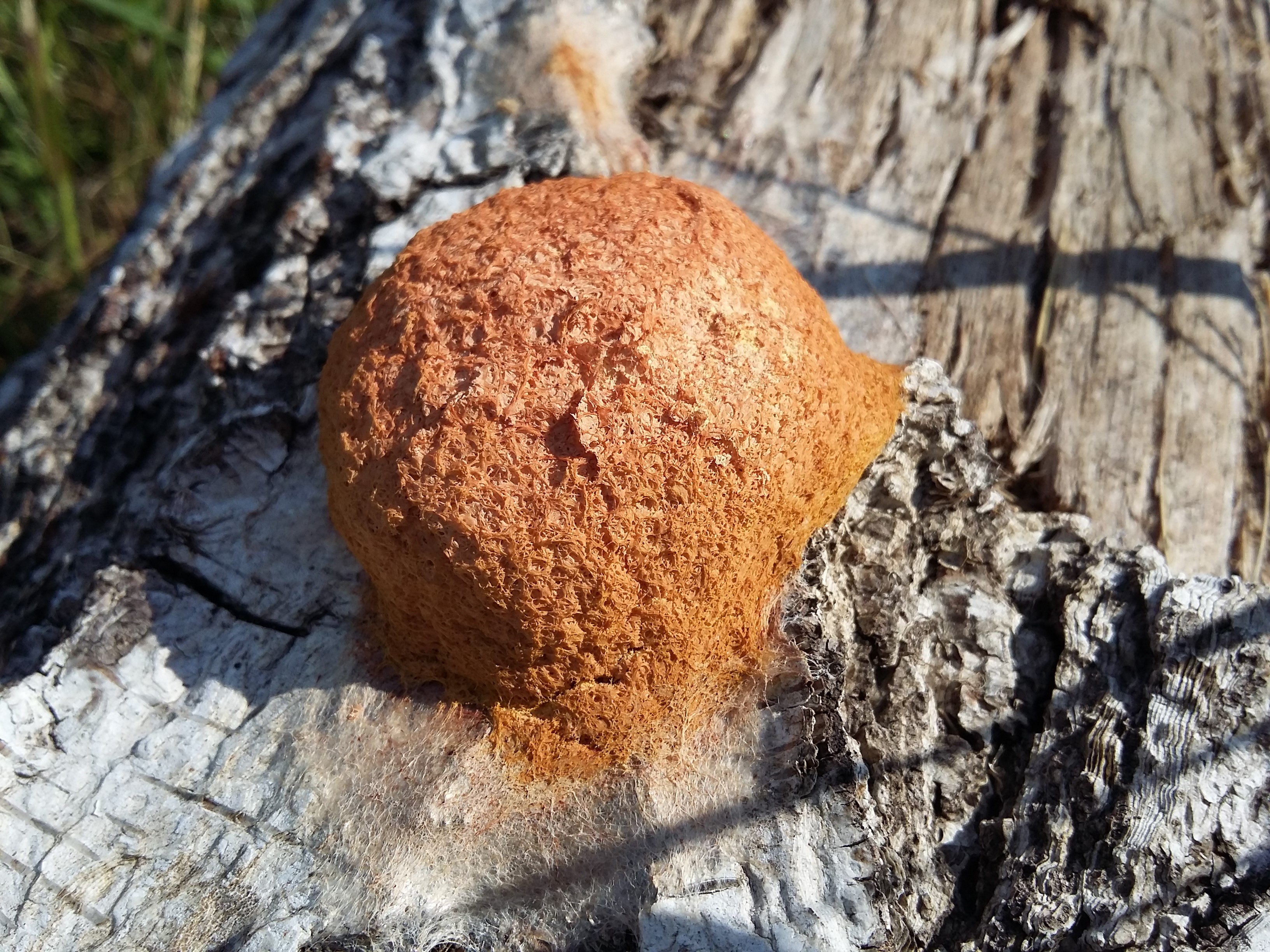 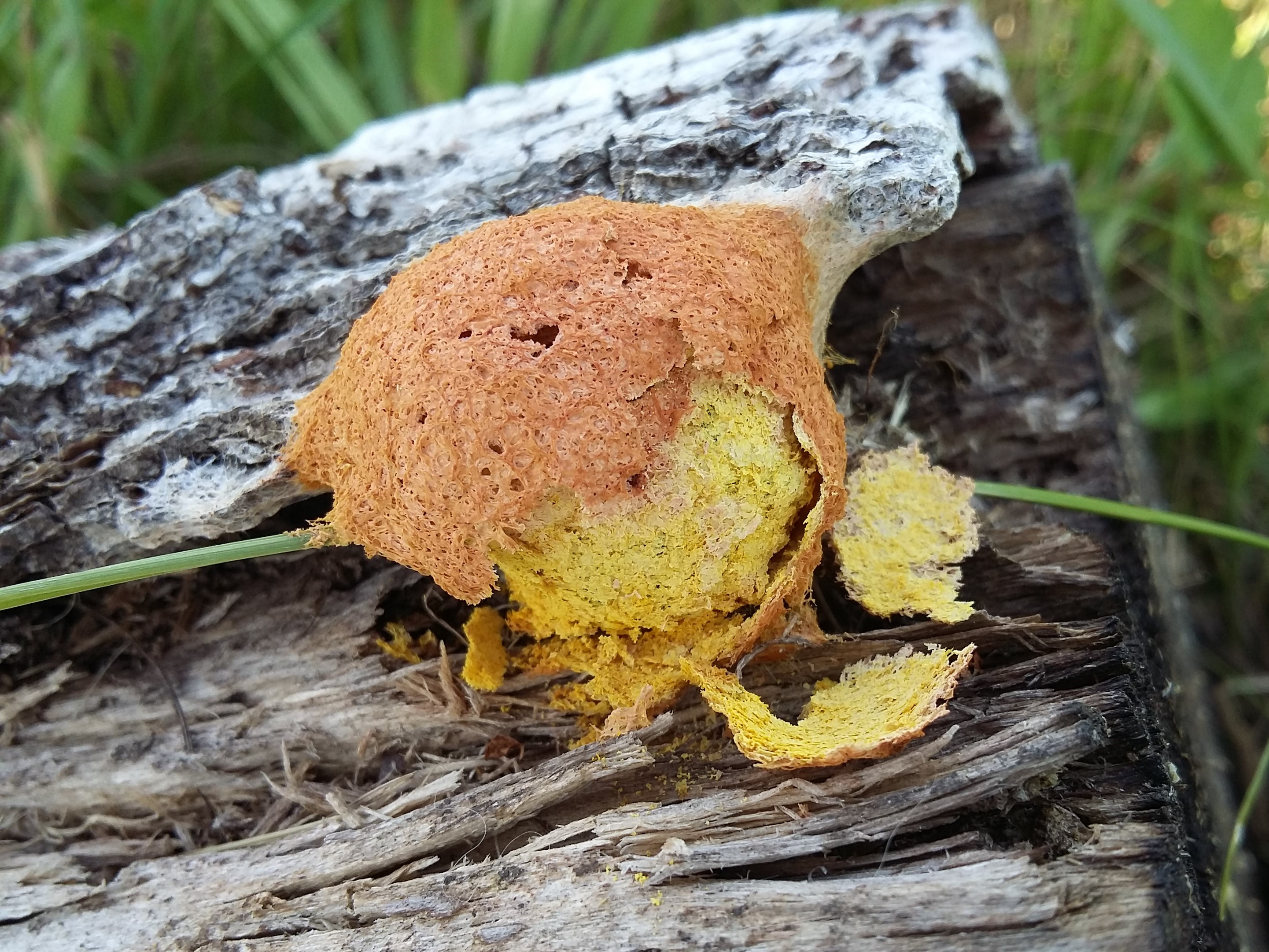 In the meadow, I found a wasp spider again. This female caught another predator, a dragonfly (it’s most likely the yellow-winged darter). 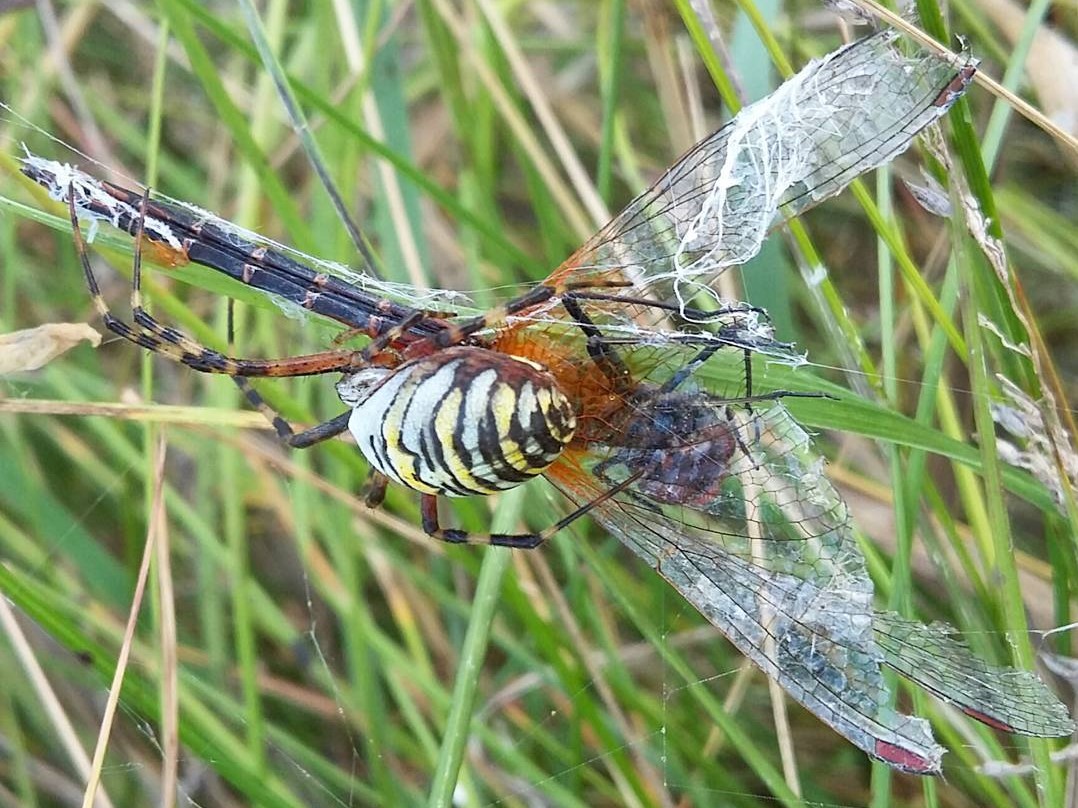 There was a pond nearby, next to which I met a caterpillar of the drinker moth (Euthrix potatoria). It’s said that the insect was so named because of the caterpillars’ passion for dew. 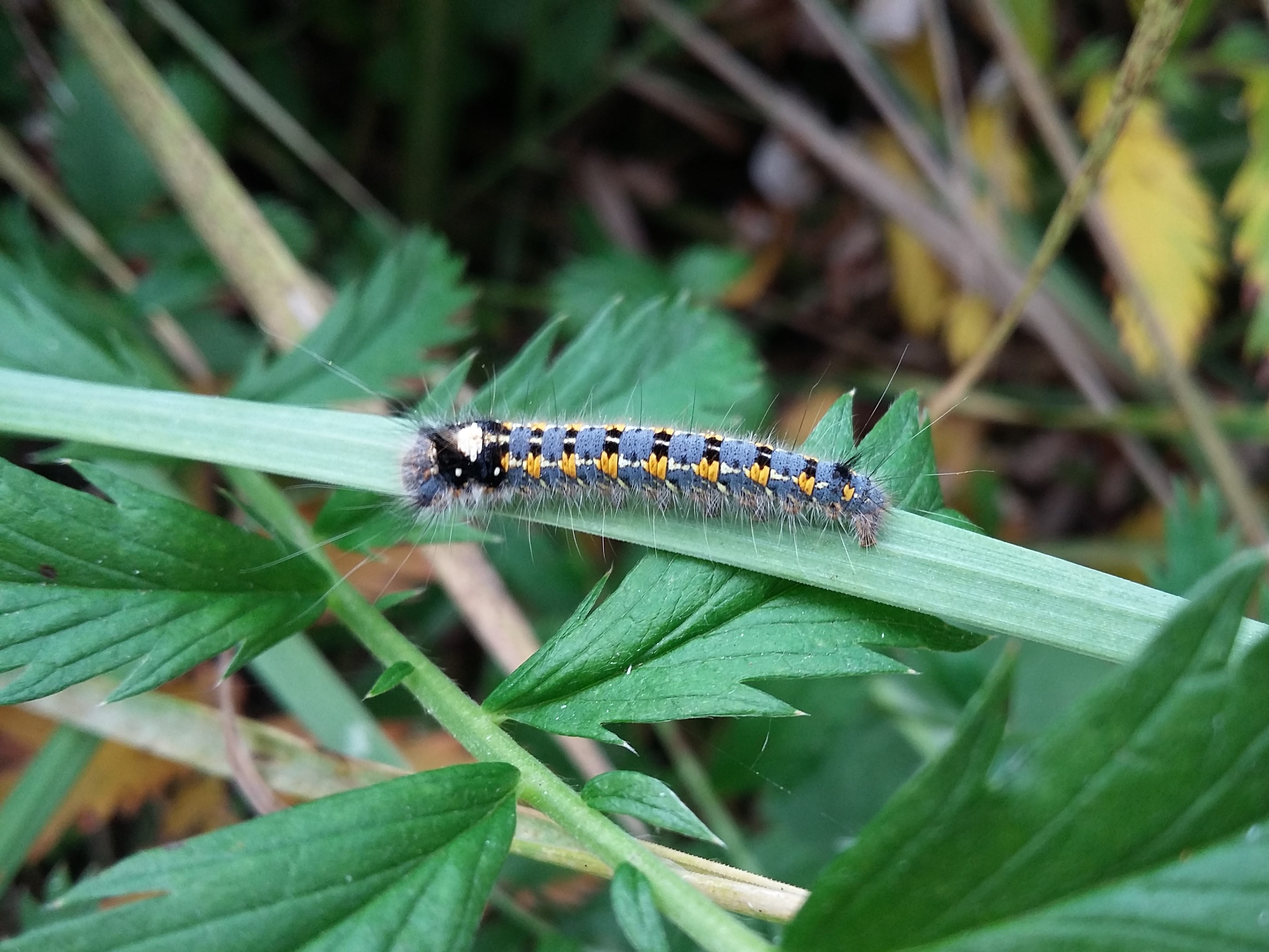 I found another caterpillar on the pond shore. It was a larva of the reed dagger (Symira albovenosa = Acronicta albovenosa), a moth that likes reed beds. 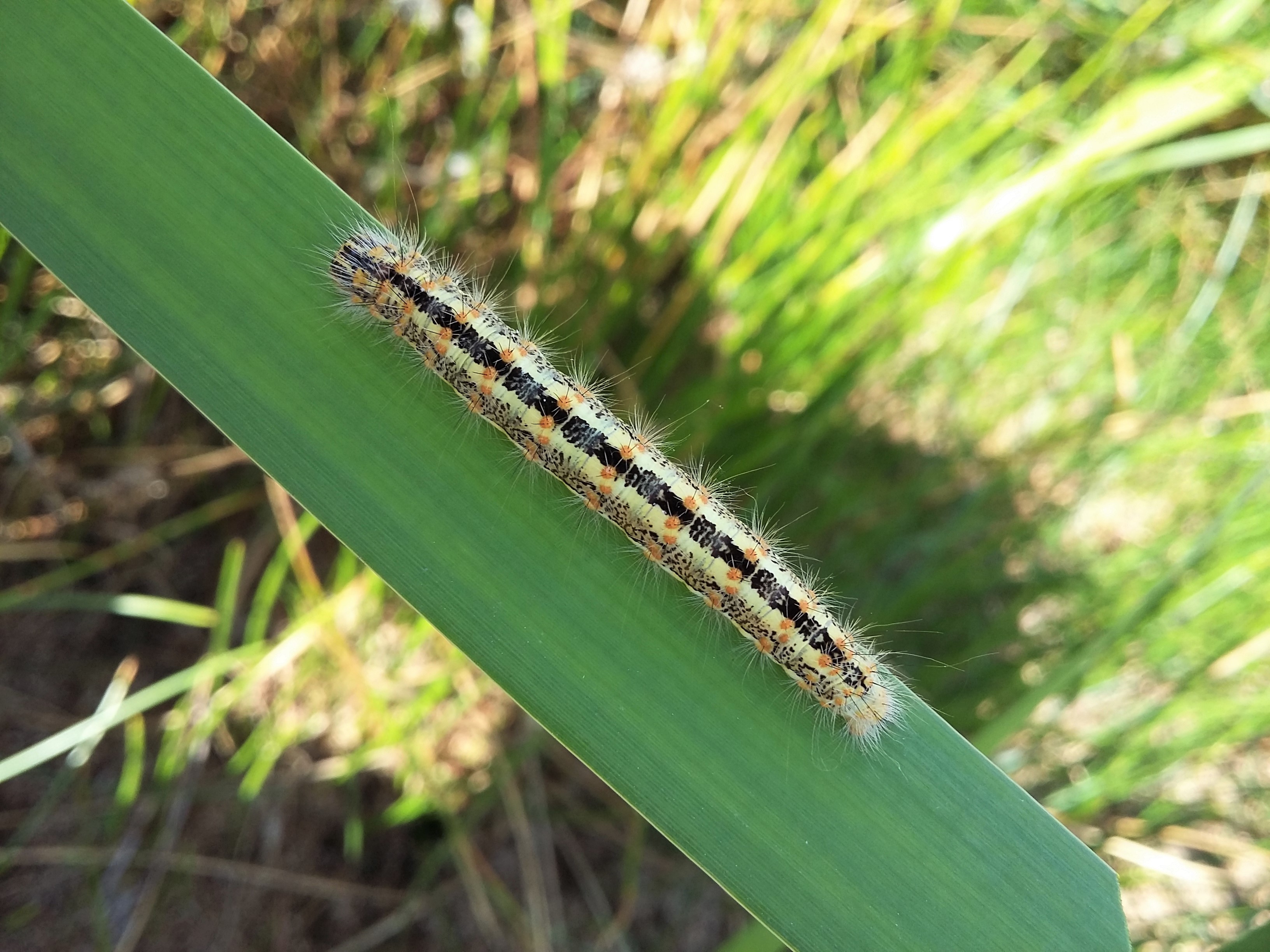 And finally, here are exuviae of some dragonfly. These are the remains of an exoskeleton that a larva left after molting. 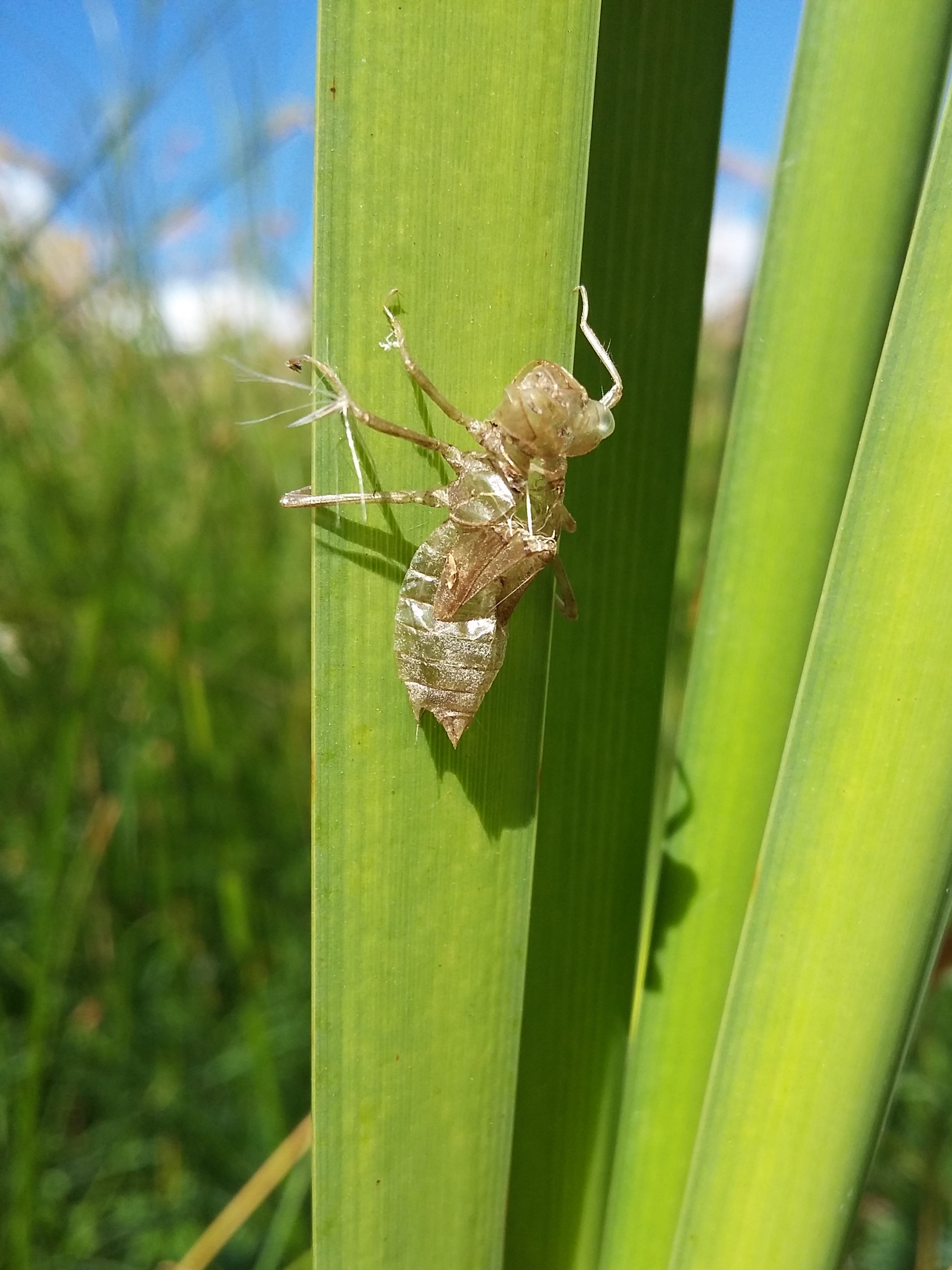