It’s been a while since we’ve had an illustrated biological tale from Athayde Tonhasca Júnior, but we get one today—on the work of one Ch. Darwin on orchis. Athayde’s prose is indented, and you can click on the photos to enlarge them.

In 1842, the Darwin family – Charles, his wife Emma, and their two children William and Anne – moved to Down House in the village of Downe, England. The Darwin patriarch, who had travelled the world aboard H.M.S. Beagle (1831–1836), would spend the remaining 40 years of his life in quiet isolation at home because of ill-health. Darwin’s condition (whose origin still puzzles scholars) did not slow him down; he embarked on several projects such as monographs on coral reefs and barnacles, and of course overseeing the publication of On the Origin of Species. But Darwin spent most of his time working with plants, which are convenient study subjects for someone with a sedentary lifestyle. Assisted by gardeners and occasionally his children, Darwin observed and experimented with cabbage, foxglove, hibiscus, orchids, peas, tobacco, violets and many other species in his garden and glasshouse.

The Old Study at Down House, where Darwin completed On the Origin of Species by Means of Natural Selection. Evolutionists are encouraged to go on pilgrimage to Down House provided they are physically and financially capable.  [JAC: it’s not expensive and is close to London. Anybody interested in Darwin and evolution MUST go! And the town has two lovely pubs.] 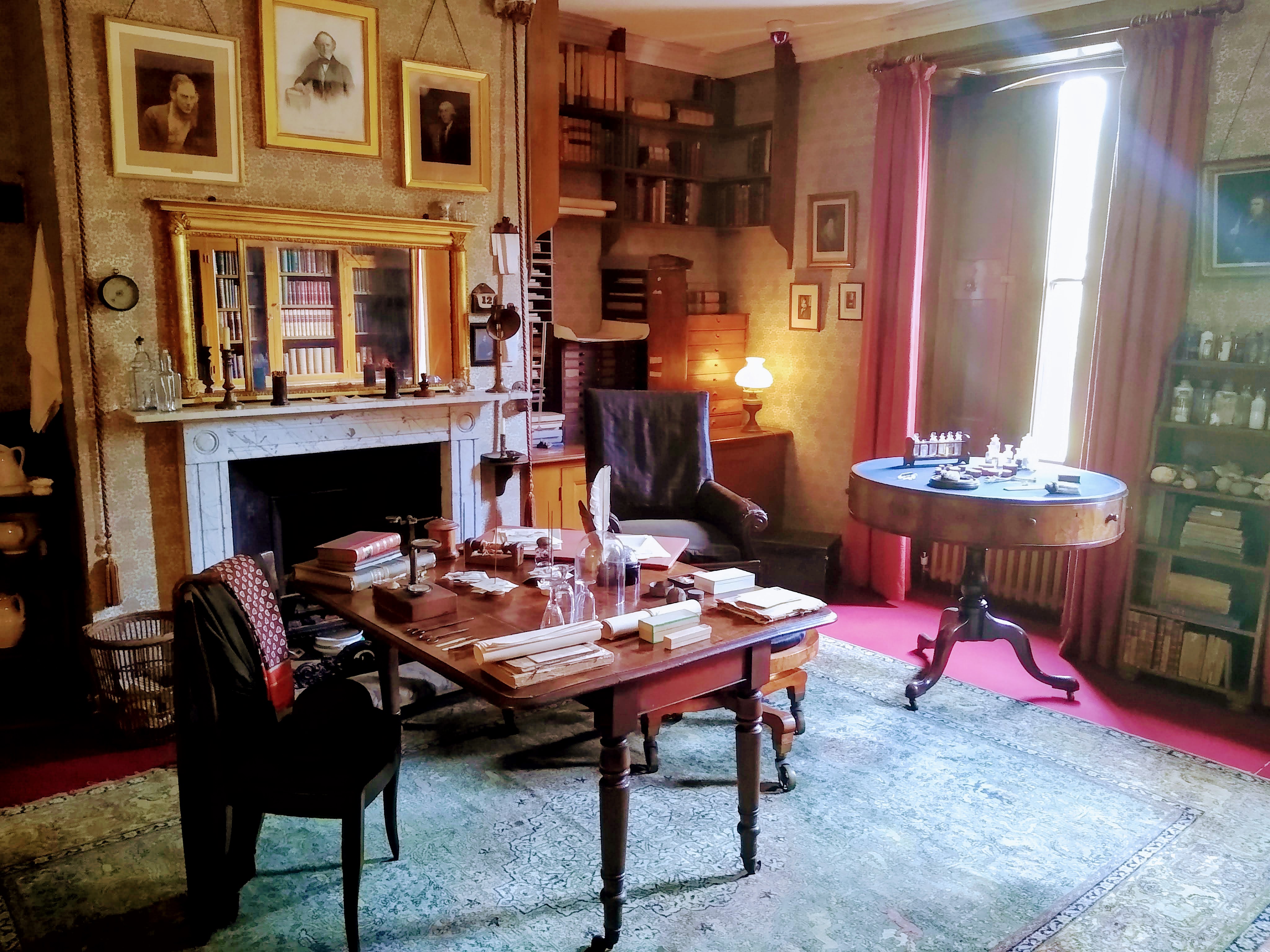 Darwin’s glasshouse at Down House, where he conducted many experiments © Tony Corsini, Wikimedia Commons. 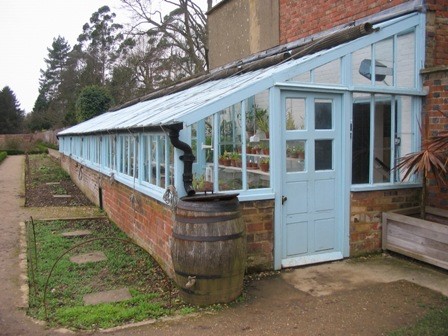 Among various major contributions to botany (detailed by Barrett, 2010), Darwin documented the importance of cross-fertilisation (i.e., the transfer of pollen between different plants) for producing healthy offspring. Ever meticulous about supporting his theories with data, Darwin amassed eleven years of continuous observations to highlight the superiority of cross-fertilisation over self-fertilisation, i.e., the transfer of pollen within the same flower or between different flowers on the same plant.

Indeed, the great majority of flowering plants predominantly or exclusively outcross – that is, they mate with other individuals – even though they could easily self-fertilise because they are hermaphroditic (their flowers contain both male and female sexual organs). In fact, numerous flowers have mechanisms to avoid self-fertilisation. At best, many self-pollinating species (or ‘selfers’) exhibit mixed mating systems.

The bee orchid (Ophrys apifera). Despite its name, this orchid is mostly a selfer in northern Europe. In the Mediterranean, where this orchid is more abundant, its flowers are pollinated by bees © Bernard Dupont, Wikimedia Commons. [JAC: note that some petals have evolved to resemble a female bee. When a male sees the flower, he tries to mate with it, and the pollen sacs above his head stick to the body.  Frustrated, he flies away with the pollen, forgets about being duped, and tries to mate with yet another flower, whereby cross-fertilization is effected. This is a great example of a plant mimicking an insect. See more below.] 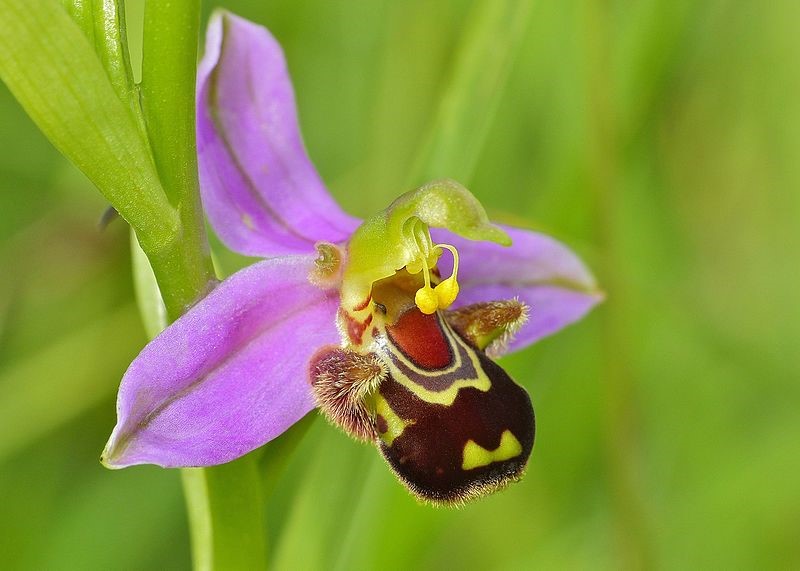 Self-pollination has some advantages: it helps to preserve desirable parental characteristics when a plant is well adapted to its environment. Because selfers do not depend on pollen carriers, they can colonise new habitats with a handful of individuals. Selfers do not have to spend energy on nectar, scents, or substantial quantities of pollen. Self-pollination is useful to farmers, as the genetic identity of a variety or cultivar is easily maintained, without requiring repeated selection of desirable features.

Self-pollination sounds like a convenient and rational lifestyle, but there are catches, and they are considerable. Selfers’ limited genetic variability makes them vulnerable to environmental changes; a hitherto well-adapted population can be driven to extinction if no individuals are adapted to novel conditions – and changes are inevitable, given enough time. Selfers are also particularly susceptible to inbreeding depression:  if the population is homogeneous, genetic defects cannot be weeded out by genetic recombination.

Remarkably, researchers were able to quickly induce the transition from cross-pollination to self-pollination in the common large monkeyflower (Erythranthe guttata, previously known as Mimulus guttatus) by preventing plants’ contact with pollinators (e.g., Busch et al., 2022). Monkeyflowers kept in a glasshouse with no pollinators for five generations increased the production of selfing seeds and showed a reduction in the stigma to anther distance – this feature, known as herkogamy, is one of the indicators of ‘selfing syndrome’: the greater the distance between stigma and anther, the greater the likelihood of the stigma receiving external pollen, thus the lower the chance of self-pollination. After nine generations, plants experienced a significant reduction of genetic variability. Monkeyflowers kept in another glasshouse with free access to the common eastern bumble bee (Bombus impatiens), one of the plant’s main pollinators, underwent none of these effects. 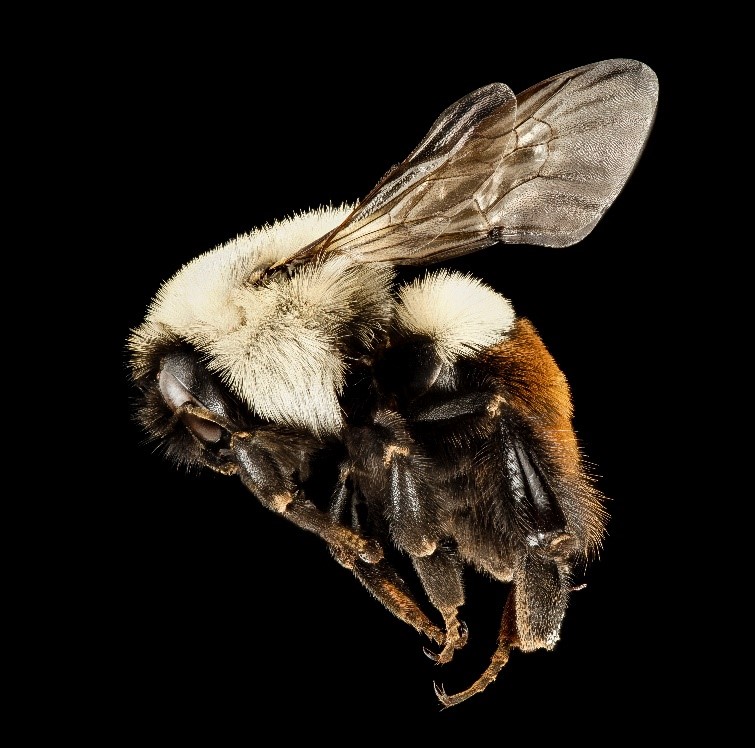 What do these observations about the monkey flower tell us? For one thing, they are cautionary tales about the risk of losing pollinators. A variety of human disturbances such as agriculture intensification, loss of habitats, and diseases have caused a decline of some insect populations, including pollinators. A scarcity of flower visitors may threaten pollination services directly, or induce some plants to adapt quickly and become self-pollinated. Adaptation sounds good, but selfers’ lower genetic diversity and reduced capacity to adjust to environmental vicissitudes make them vulnerable to extinction.

The renowned botanist and geneticist G. Ledyard Stebbins (1906-2000) suggested that selfing is an evolutionary dead end: it is advantageous in the short term but harmful in the long run. And because the transition from outcrossing to selfing is irreversible, according to Dollo’s Law (structures that are lost are unlikely to be regained in the same form in which they existed in their ancestors), self-fertilization ends up in irretrievable tears. And the monkeyflower has shown that it all may happen before we notice it.

While Darwin worked in his garden, somewhere in the British countryside a four-spotted moth (Tyta luctuosa) landed on a pyramidal orchid (Anacamptis pyramidalis), intending to sip some nectar. The moth certainly didn’t expect to end up with its proboscis – the elongated mouthparts used for sucking by butterflies and moths – covered with blobs of pollen. But that was the least of the moth’s problems, as disaster loomed: the hapless wanderer was captured by an unknown collector and became a model for George B. Sowerby (1812-1884), the illustrator of Charles Darwin’s masterpiece about orchid fertilisation – On the Various Contrivances by Which British and Foreign Orchids Are Fertilised by Insects, and On the Good Effects of Intercrossing.

An illustration from Charles Darwin’s book on fertilisation of orchids depicting the head of a four-spotted moth with its proboscis laden with several pairs of pollinia from pyramidal orchids. Names of the species involved have changed since then. 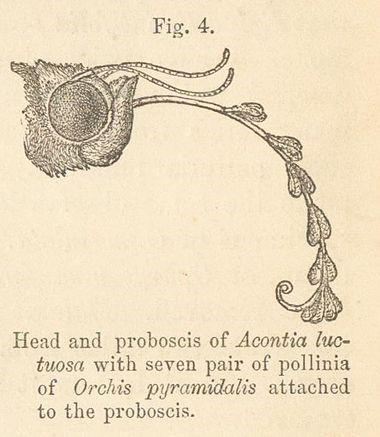 Those globules of pollen attached to the moth’s proboscis are known as pollinia (sing. pollinium). Each unit contains from five thousand to four million pollen grains, depending on the species. The grains are stuck together with pollenkitt, an adhesive material found in almost all angiosperms pollinated by animals. A stalk-like structure connects the pollinia to a gluey pad known as viscidium, and the whole assemblage is often referred to as a pollinarium.

A pollinarium: the pollinia on the toothpick are held in place by the sticky viscidium © Frederick Depuydt, Wikimedia Commons. 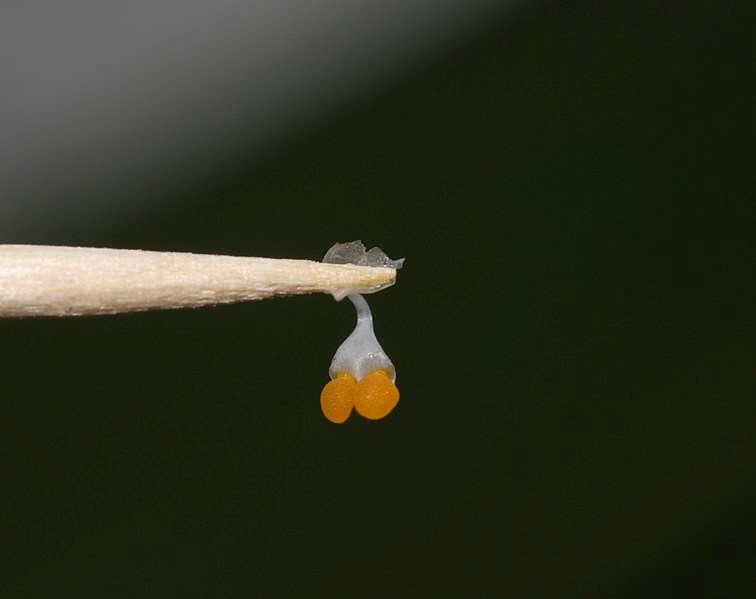 Pollen grains lumped together in a sticky package are not easily carried away by water or wind. As Darwin learned from his observations and experiments, this is done by animal vectors, mostly wasps and bees (although moths, beetles, flies and birds do the job for a reasonable number of orchid species). Having pollen grains in a single unit reduces wastage during dispersal, but it’s a risky strategy: a lost pollinium means no pollination at all. So orchid flowers have undergone dramatic morphological transformations to assure that pollinia are picked up by the right pollinator:

‘If the Orchideæ had elaborated as much pollen as is produced by other plants, relatively to the number of seeds which they yield, they would have had to produce a most extravagant amount, and this would have caused exhaustion. Such exhaustion is avoided by pollen not being produced in any great superfluity owing to the many special contrivances for its safe transportal from plant to plant, and for placing it securely on the stigma. Thus we can understand why the Orchideæ are more highly endowed in their mechanism for cross-fertilisation, than are most other plants.’ (Darwin, 1862, Fertilisation of Orchids).

What are some of these contrivances mentioned by Darwin? Orchids’ stamens (comprising anthers and filaments, the male reproductive parts) are fused with the pistil (which are the female reproductive parts: stigma, style and ovary) to form a structure known as a column. The anther (the pollen-producing organ) is located at the distal – away from the centre – end of the column, and the stigma (the pollen-receiving organ) lies close by. Directly below the column there’s an enlarged petal named labellum or lip, which often is noticeably different from other flower parts in its colour, markings, or shape. For nectar-producing species, nectaries are located at the base of the labellum. 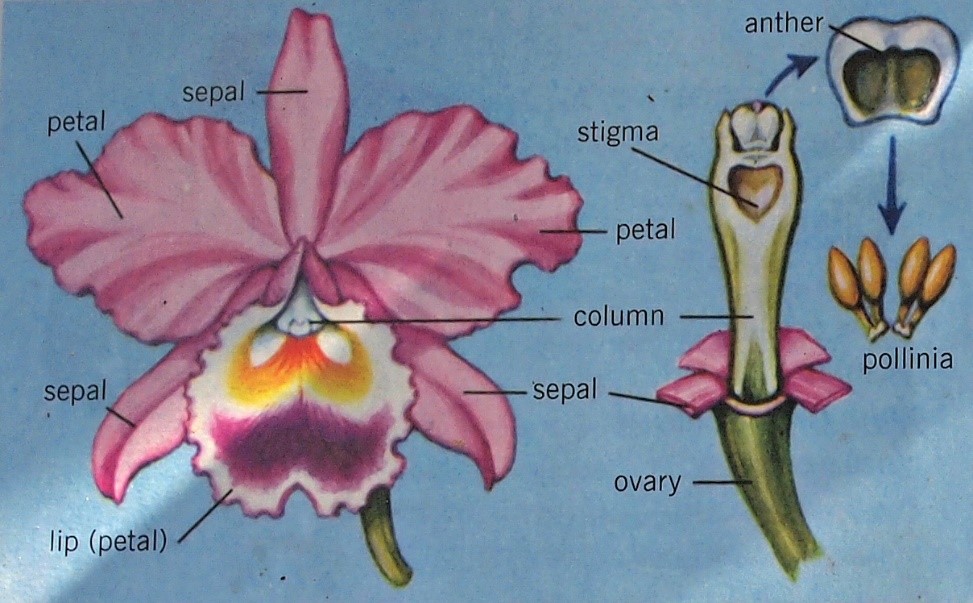 So the stage has been meticulously set. The distinct labellum is a perfect landing strip for an insect attracted by the orchid’s rewards, be they real (nectar) or not (when physical or chemical decoys are deployed). The pollinator lands on the labellum, touches the tip of the column, and goes away with pollinia securely adhered to its body by the viscidium, which works better on smooth surfaces such as the eyes and mouthparts of insects and beaks of birds. When the pollinator visits another flower, the pollinia are likely to be transferred to the stigma. Sticky pollinia and viscidium ensure secure removal of pollen, minimal losses during transit, and a high probability of deposition on a receptive stigma.

An orchid bee (Euglossa sp.) with pollinia attached to it © Eframgoldberg, Wikimedia Commons: 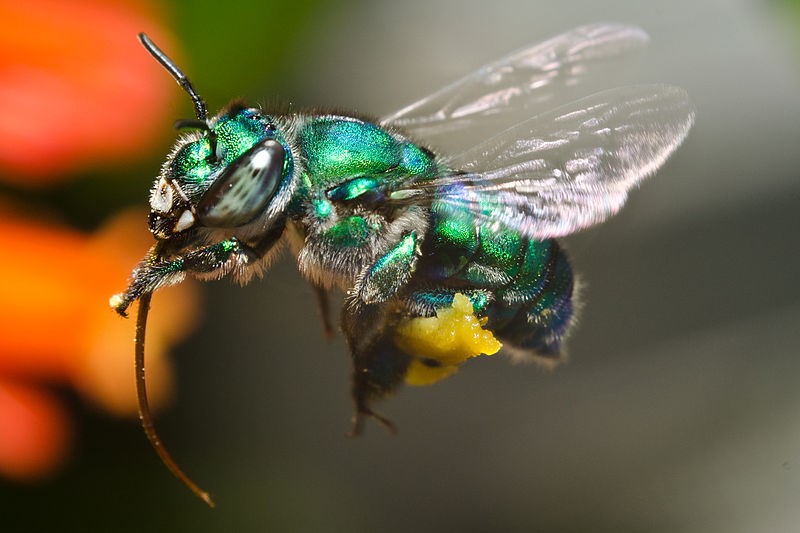 These morphological features have evolved independently in two plant groups: orchids (family Orchidaceae) and milkweeds (subfamily Asclepiadaceae of the family Apocynaceae). But pollinia are relatively more important for orchids; with more than 26,000 described species, they make up about 8% of all vascular plants and span a range of habitats in all continents except Antarctica; there are more orchid species in the world than mammals, birds and reptiles combined.

Orchids’ highly specialized ‘lock and key’ pollination system reduces the chances of pollen being picked up by the wrong flower visitor or being transferred to the wrong plant species; the selective adaptations towards the right flower-pollinator association must have contributed to orchids’ enormous richness and diversity of forms. It’s amazing what a dab of glue here and there can do.

A figure from the 1877 edition of Fertilisation of Orchids. A pencil inserted into the flower of an early-purple orchid (Orchis mascula) comes out with an adhered pollinium. Within 30 seconds, loss of moisture bends the stalk forward. If the pollinium was attached to a bee, it would be perfectly positioned to touch a receptive stigma. 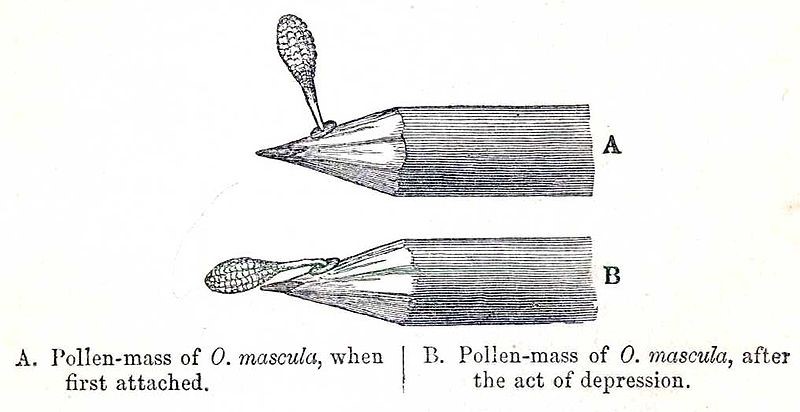