Today’s photos come from Tony Eales in Queensland. His narrative and IDs are indented, and you can enlarge the photos by clicking on them.

Lots of beautiful beetles around at the moment. I’ve been checking the flowers of native plants and under the lights of the train station to see what is around locally. Here’s a selection

The most interesting find was this small beetle. I found it crawling on my desk at work. I suspect I accidentally transported it there on my clothing. While it is just a small brown beetle, it turns out that this is the single species Acanthocnemus nigricans, in its own family Acanthocnemidae. It is a pyrophilous beetle that congregates in recently burned areas and even attracted to bonfires. It has twin heat sensing organs beneath its pronotum that it uses to find fires. Originally a solely Australian species it has now spread to Europe, Africa, India and Southeast Asia.  There was a small bushfire right near my house recently and and I think that’s why it ended up on my clothes and transported to my office. This shows the use of always carrying collection vials. 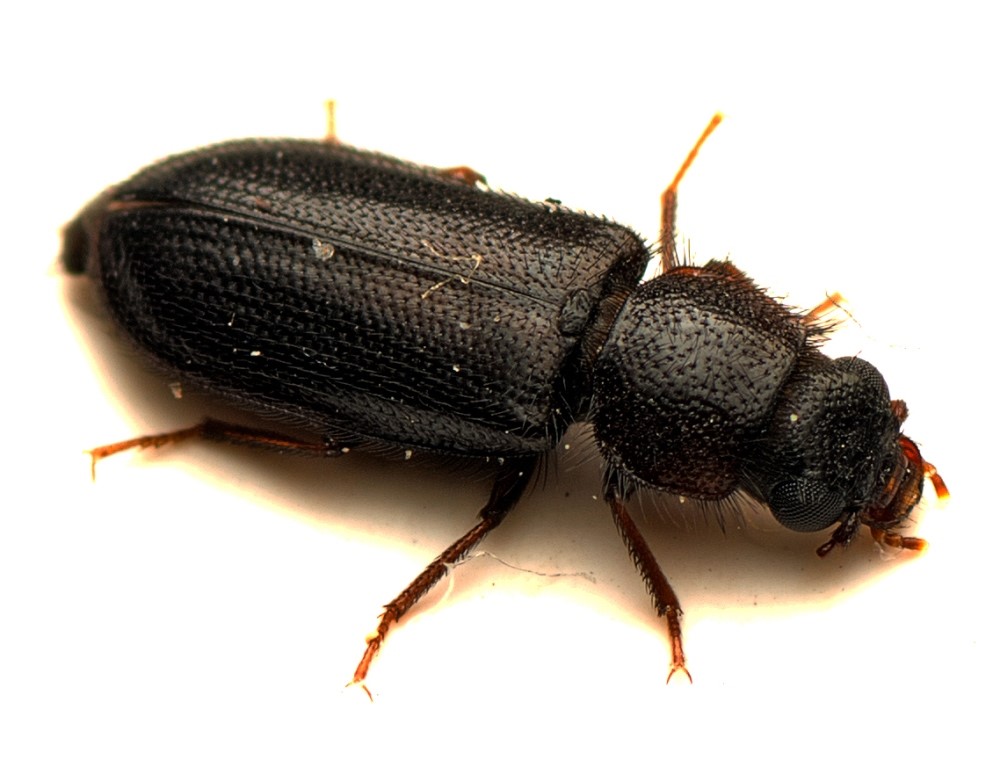 I’ve also come across a couple of longicorn beetles. One from the large robust Subfamily Prioninae. This one is a female Cacodacnus planicollis. The males have large mandibles for fighting each other, however even the smaller female jaws are not something I’d like to get my finger to close to. 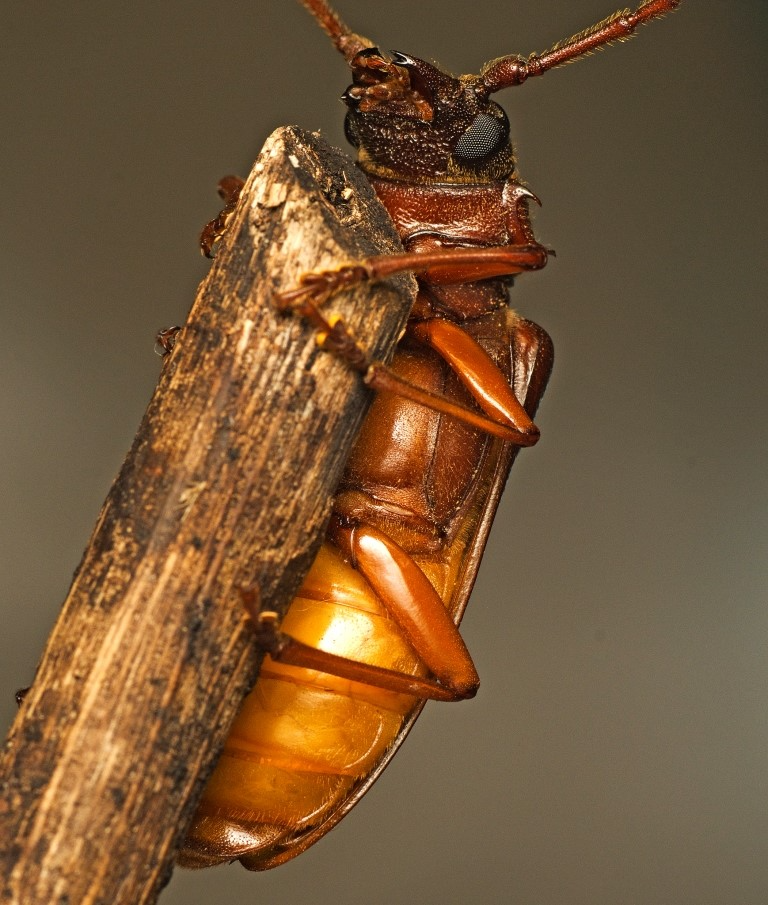 The other longicorn was a member of the Subfamily Cerambycinae or typical longicorns. This is Coptocercus multitrichus, a pretty, medium-sized beetle associated with Eucalyptus forests. 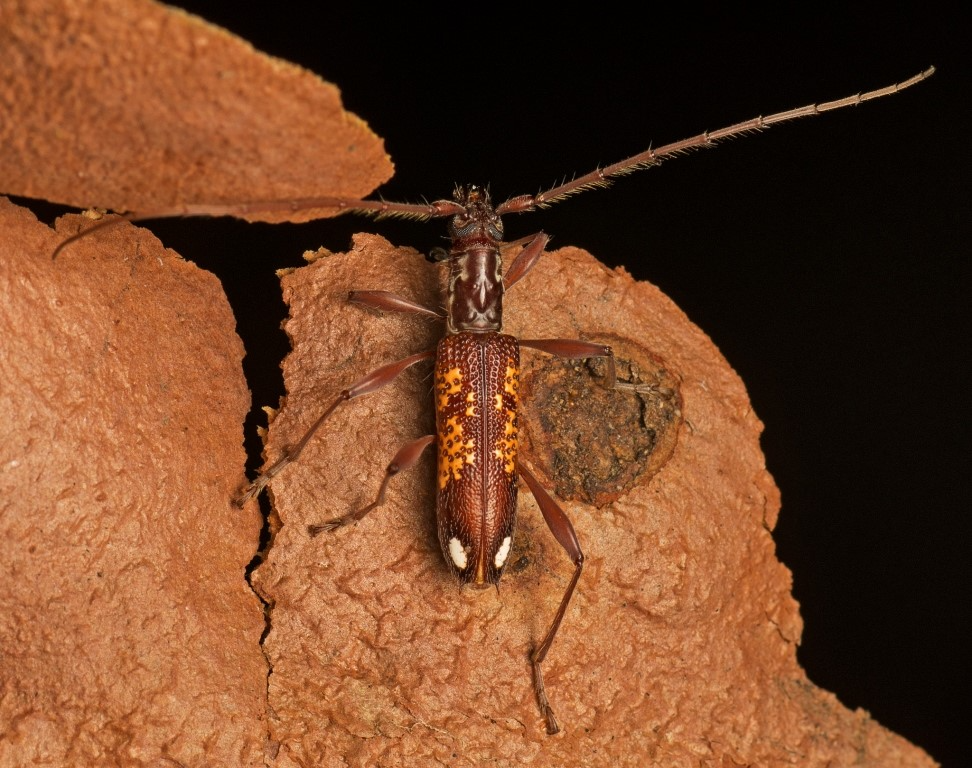 The main reason I have been searching flowering trees and shrubs is to find jewel beetles. So far, I haven’t had a great deal of luck but I have found two species, neither feeding on flowers.

First is a small species that I find on the stems of Acacia, Diphucrania albosparsa: 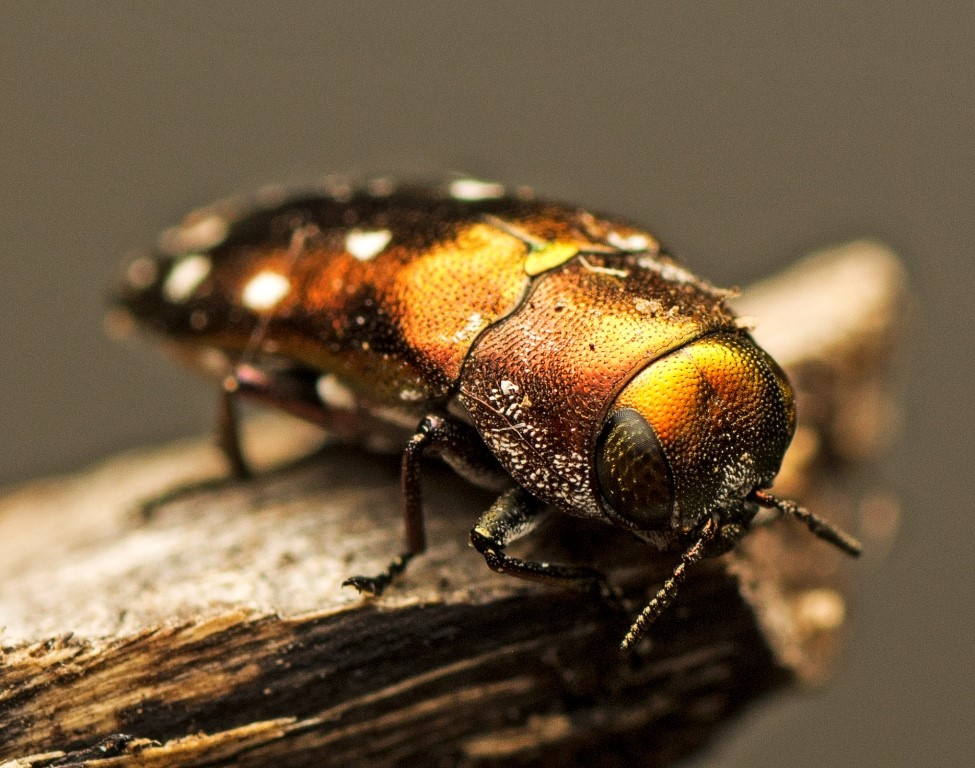 The other jewel I found was a new one for me, Hypocisseis suturalis. I found it on a Red Ash (Alphitonia excelsa) leaf, but it looked so much like a bird or gecko dropping I had to touch it to make sure it was an insect. I am used to another species of Hypocisseis that I regularly find on Red Ash so it was a bit of a surprise to find this new species on the same host plant. 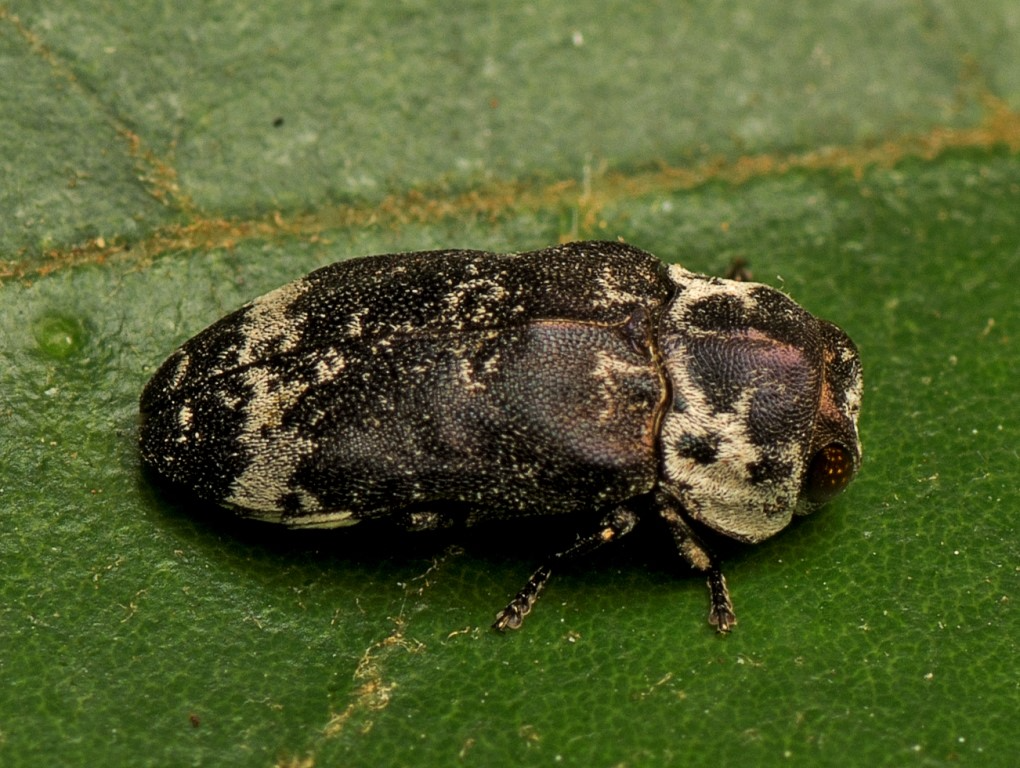 Speaking of Red Ash, every year at this time I find Red Ash trees half stripped of their leaves and covered in feeding and mating small scarabs of the genus Diphucephala. This one is a male with enlarged extensions at the front of the head for male-male battles. 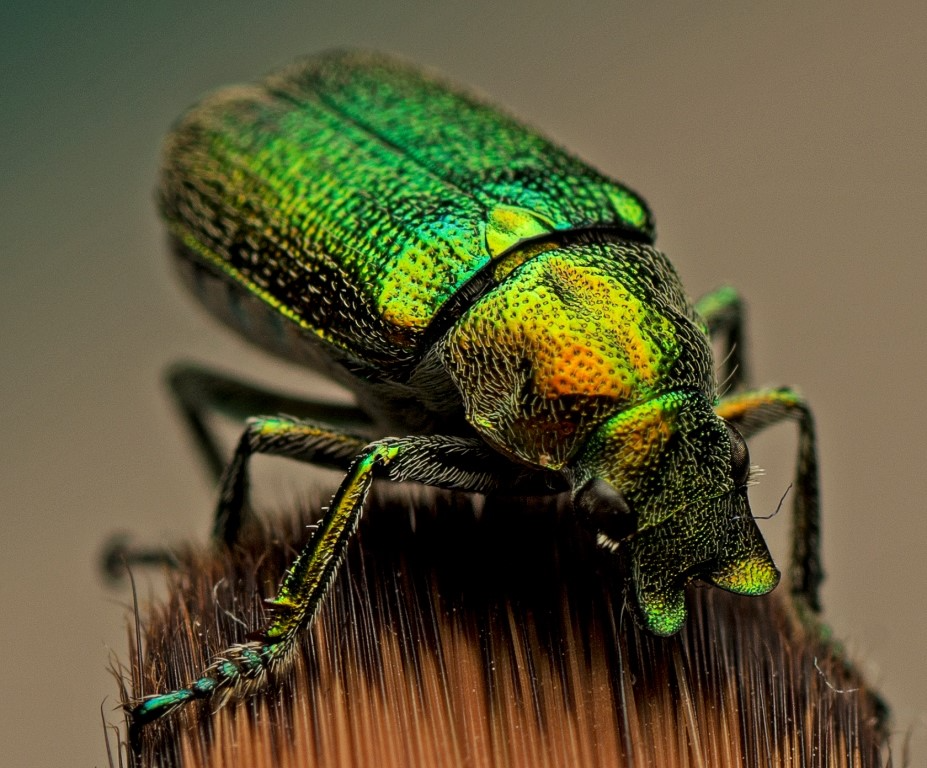 One beetle species I have been finding on flowers is this member of the Comb-clawed Darkling Beetle subfamily Alleculinae. This one is Lepturidea viridis. 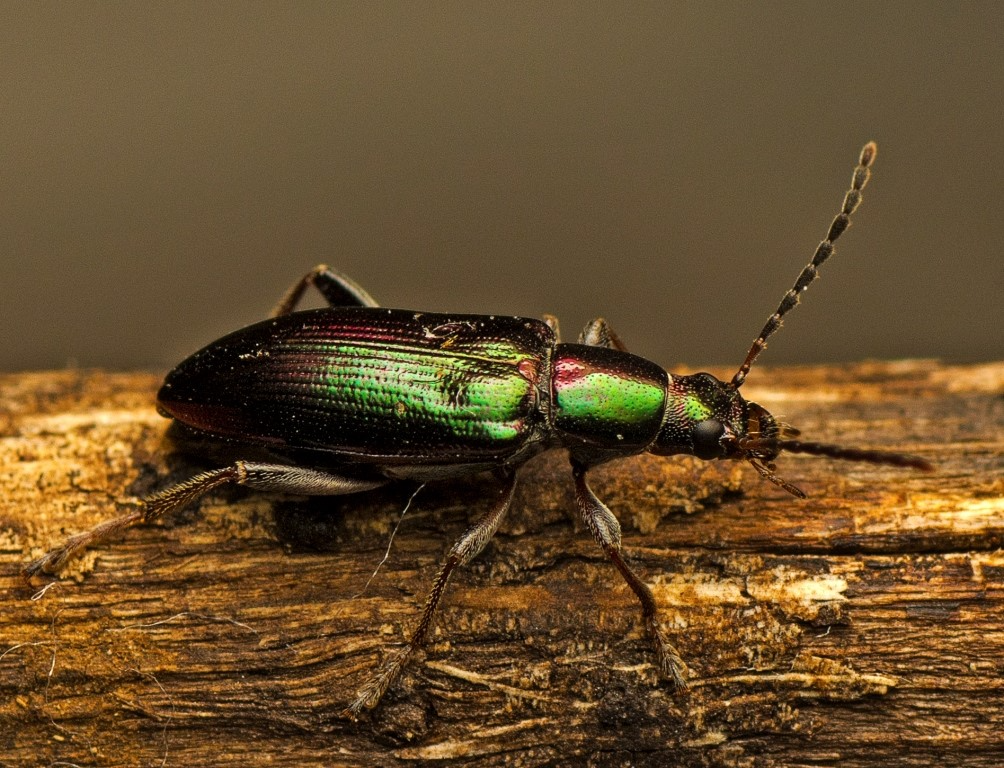 Also on the flowers I have found many of this gorgeous metallic-blue Flower Weevil (Subfamily Baridinae), Ipsichora desiderabilis: 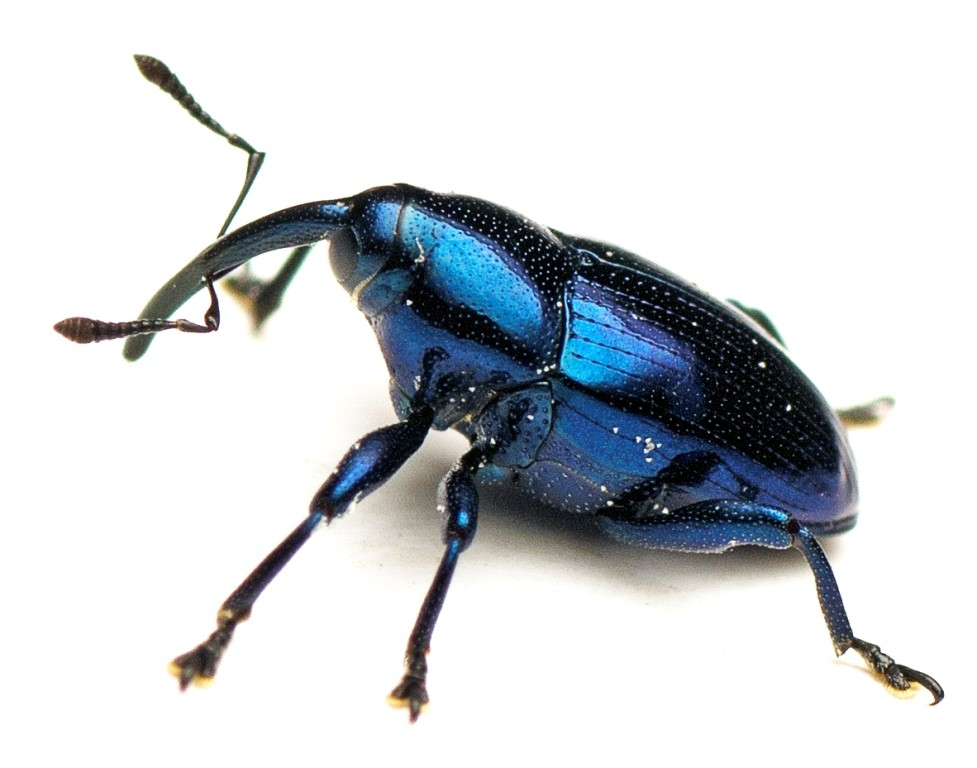 Of course weevils, as the most specious family of beetles, are everywhere. This one is Myllorhinus strenuus, a member of the True Weevils subfamily Curculioninae: 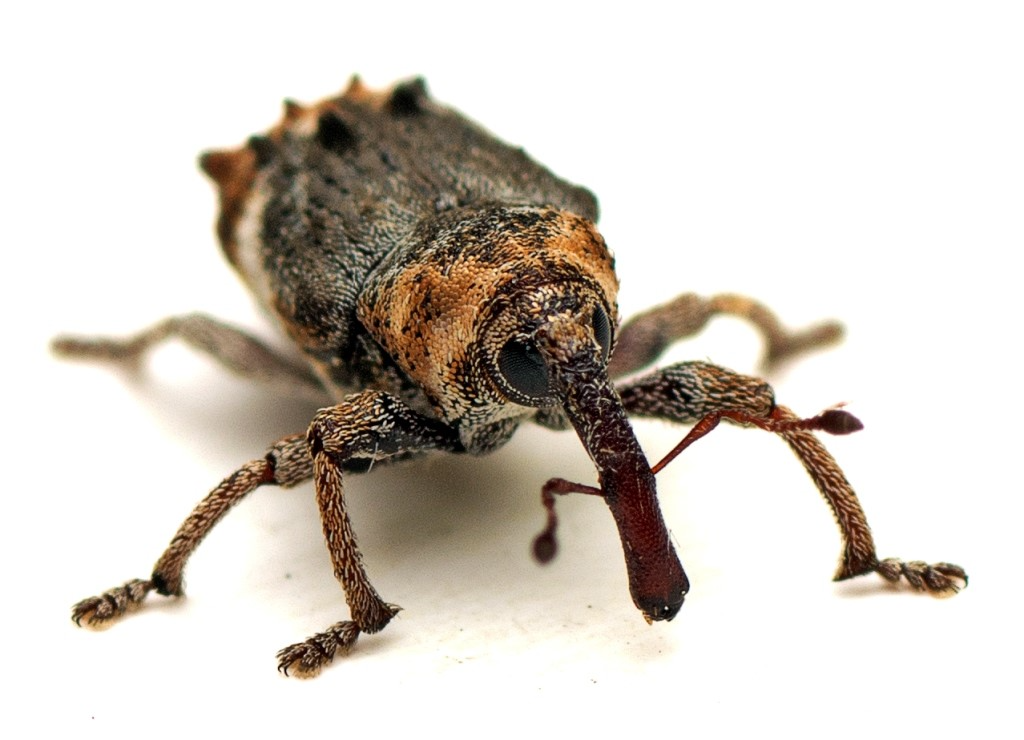 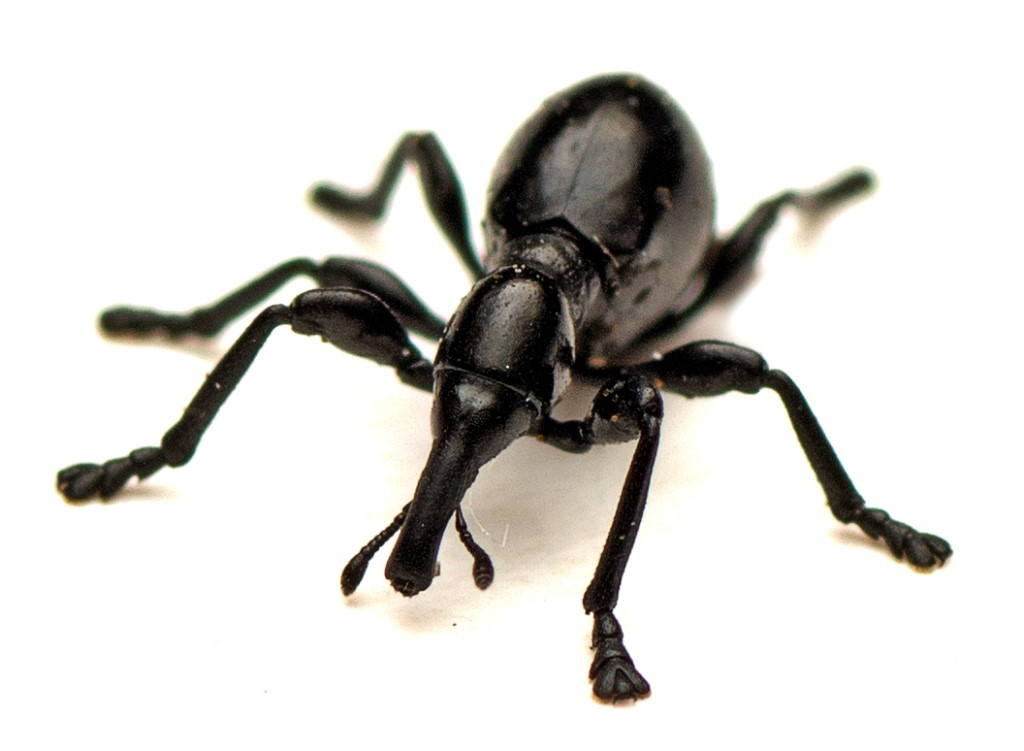