Welcome to The Cruelest Day Tuesday, November 22, 2022. However, it’s only two days until Turkey Day, and today is National Cashew Day, celebrating the Queen of Nuts (or is that Lauren Boebert?), second only to the King—the Macademia Nut. The cashew  (Anacardium occidentale) is the drupe portion of the fruit of a tropical evergreen tree. Here’s a photo of the fruits, with the green drupes, containing the nut, at the bottom. The yellow fruits can be made into a drink or fermented into cashew liquor. 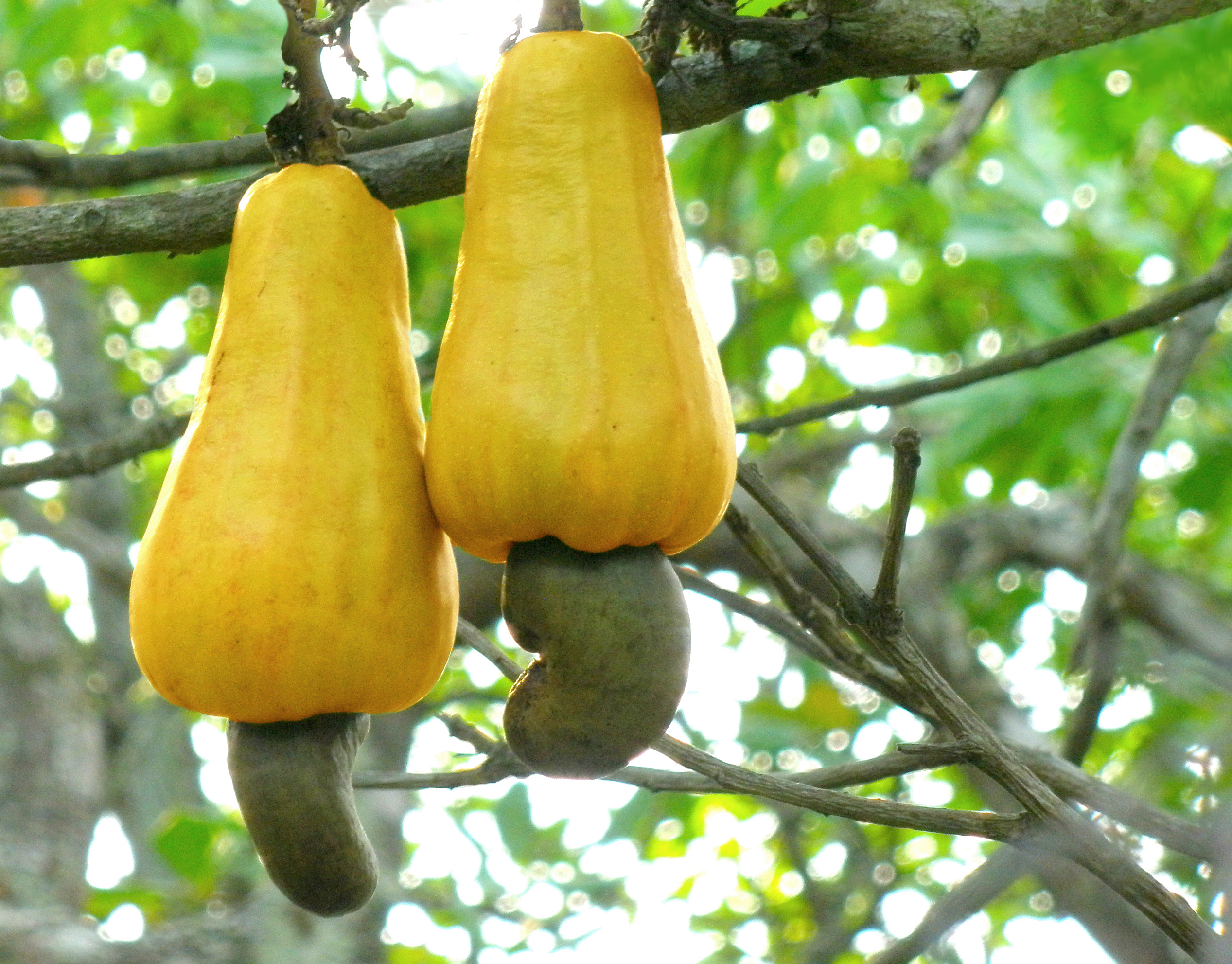 It’s also National Cranberry Relish Day, National Stop the Violence Day, and, in Albania, Day of the Albanian Alphabet, which was finalized on this day in 1908 at an Alphabet Congress.

Here’s the alphabet as currently used (go here to hear the letters pronounced):

Readers are welcome to mark notable events, births, or deaths on this by consulting the November 22 Wikipedia page.

Readership and comments are low these days, and I’m beginning to wonder if this website is circling the drain. Everybody’s gone to podcasts, but I won’t.

*The suspect in the Colorado Springs gay nightclub massacre that killed five people and injured 18, one  Anderson Lee Aldrich, 22, is being charged with “five counts of murder and five counts of bias-motivated crime causing bodily injury.” (Why not 23 counts?) Those are “hate crimes”, though, how do we know since Aldrich hasn’t talked to the police? But perhaps they’re guessing something about a motive. That’s supported by this from the news:

A Colorado judge granted prosecutors’ request to seal court records related to Mr. Aldrich’s arrest until the conclusion of the investigation.

The Freedom from Religion Foundation pretends to know more, as their announcement connects the shooting to homophobia, but in a very oblique way:

How horrifying that on the eve of the annual Transgender Day of Remembrance yesterday, a gunman armed with an assault rifle killed at least five individuals and wounded another 25 at an LGBTQ nightclub in Colorado Springs.

Little is yet known about the views of the 22-year-old Colorado Springs suspect. But much is known about the wealthy Christian nationalist group Focus on the Family, which dominates the city and has made anti-LGBTQ initiatives a linchpin. It counts as its mission “defending the God-ordained institution of the family.”

Back to the NYT, which reports how patrons of the bar disarmed and beat the suspect. They are brave people, and here’s one of them:

Richard M. Fierro said he was at a table in Club Q with his wife, daughter and friends on Saturday, watching a drag show, when the sudden flash of gunfire ripped across the nightclub. His instincts from four combat deployments as an Army officer in Iraq and Afghanistan instantly kicked in. Fight back, he told himself.

In an interview at his house, where his wife and daughter were still recovering from injuries, Mr. Fierro, 45, who left the Army in 2013 as a major, according to military records, described charging through the chaos at the club, tackling the gunman and beating him bloody with the gunman’s own gun.

“I don’t know exactly what I did, I just went into combat mode,” Mr. Fierro said, shaking his head. “I just know I have to kill this guy before he kills us.”

At least one club patron disarmed the gunman during the attack by grabbing his weapon and hitting him in the head with it. “In fact,” Suthers said, “there was a patron on top of the gunman.”

*If you watched Artemis-1 this morning, you’ll know that the capsule aced its journey around the back side of the Moon, firing its engines briefly to bring it into an orbit around the moon that will last until December 1, when the engines will fire again and bring the capsule back to Earth.

Here’s a long video of the flyby, but start the video at the beginning to see the capsule approach the Moon, giving a spectacular view of the Earth as well at 12:30. Earth then disappears (along with the signal) as the capsule goes behind the Moon, which blocks the signal, at 29:05. What a view! Watch longer to see the Earth reappear after the capsule re-emerges after its burn, now in orbit.

The splashdown will take place on December 11.

*In its first game at the World Cup, the U.S. tied Wales 1-1, with Wales tying with a penalty kick at 82 minutes. They both are still in the tournament, neither with an advantage (as far as I know).

Here’s a five-minute video of the highlights.

And according to the Guardian, Wales fanes—but only the women, not the men—were forced to surrender their rainbow-colored “bucket hats” before entering the stadium. Why just the women? The reason, of course, is that in Qatar homosexuality is illegal, so they don’t want any LBGTQ+ symbols visible during the matches. That’s ridiculous.  A tweet:

Our rainbow bucket hat. We are so proud of them, BUT news on the ground tonight is our welsh female supporters wearing them in #Qatar are having them taken off them, Not the men, just Women. @FIFAcom ARE YOU SERIOUS !!#LGBTQRights 🏴󠁧󠁢󠁷󠁬󠁳󠁿🏳️‍🌈🏳️‍⚧️#WeBelong | #NoPrideWithoutAll pic.twitter.com/bvo9y51WzG

Players were also warned that they’d be shown a yellow card for wearing rainbow-colored “one love” armbands, another way of supporting gay rights.

*In other World Cup news related to human rights, the Iranian national soccer team pulled off a serious and viral protest by refusing to sing their country’s national anthem, and Iranian fans in the stands held up signs against the regime. This overshadowed, at least to me, the team’s loss to England:

Iran’s players didn’t sing their national anthem and didn’t celebrate their goals. In the stands, many Iranian fans showed solidarity with the protest movement that has roiled the country for months.

Iran’s World Cup opener Monday against England was not just about soccer, but the political struggles gripping the Islamic Republic. And for some Iranian women, barred from attending men’s soccer matches at home, it was a precious first chance to see the national team live.

“Do you know how painful it is to be the biggest football fan and never go to a match in 34 years?” said Afsani, a 34-year-old beekeeper from Tehran, who traveled to Qatar to watch the men’s team for the first time. She said she wept when she entered the Khalifa International Stadium.

Like other Iran fans, Afsani declined to give her last name for fear of government reprisals.

Iran lost 6-2 to a superior England team, but the result wasn’t the most important to Mayram, a 35-year-old Tehran resident who also watched her first soccer match live. She was disappointed that the players didn’t show more overt solidarity with the protests at home.

“You have girls being killed in the street,” she said. “It’s hard to say but this is not a happy occasion. It is really sad.”

. . . Before international matches, Iran’s players usually sing the national anthem with the right hands on their heart. On Monday they stood silently, their arms draped around each other’s shoulders, prompting Iran’s state TV to cut from a close-up of the players’ faces to a wide shot of the pitch. During the match, the players didn’t celebrate their two goals, something that has become common in Iranian league matches since the protests began. 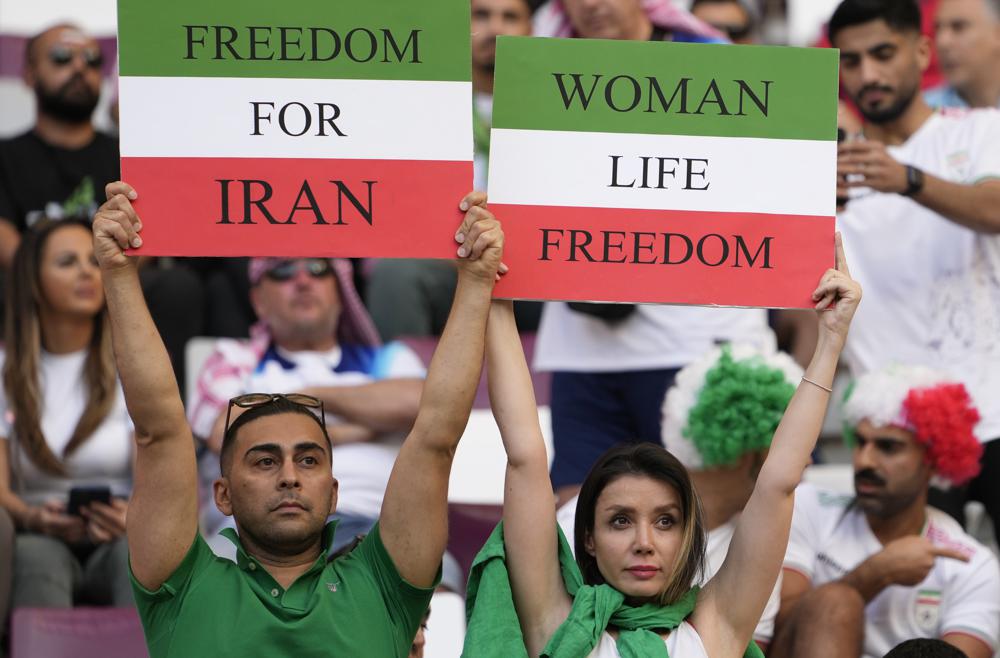 *The West Indian Manatee (Trichechus manatus) used to be an endangered species in the U.S., but were taken off the list in 2017. That was premature. Now human-caused pollution is causing them to die by the hundreds in Florida, killing off the seagrass on which this gentle species grazes. From the Associated Press:

Manatees that are dying by the hundreds mainly from pollution-caused starvation in Florida should once again be listed as an endangered species, environmental groups said Monday in a petition seeking the change.

The petition filed with the U.S. Fish and Wildlife Service contends it was an error to take manatees off the endangered list in 2017, leaving the slow-moving marine mammals listed only as threatened. They had been listed as endangered since 1973.

Have a look at that petition, signed by a bunch of good organizations, and recounting the problem in detail. It’s 147 pages long with 30 pages of references! The article continues:

“The Fish and Wildlife Service now has the opportunity to correct its mistake and protect these desperately imperiled animals,” said Ragan Whitlock, attorney for the Florida-based Center for Biological Diversity.

Under the Endangered Species Act, a species is considered endangered if it is “in danger of extinction throughout all or a significant portion of its range.” A threatened species is one that may become endangered in the foreseeable future.

The petition, also sponsored by the Save the Manatee Club, Miami Waterkeeper and others, contends that pollution from fertilizer runoff, leaking septic tanks, wastewater discharges and increased development is triggering algae blooms that have killed much of the seagrass on which manatees depend, especially on Florida’s east coast.

That resulted in the deaths mainly from starvation of a record 1,100 manatees in 2021 and is continuing this year, with at least 736 manatee deaths reported as of Nov. 11, according to the Florida Fish and Wildlife Conservation Commission. The 2021 deaths represented 13% of all manatees estimated to live in Florida waters.’

A lot of manatees are also injured or killed by thoughtless drivers of powerboats; look at this photo from the report: 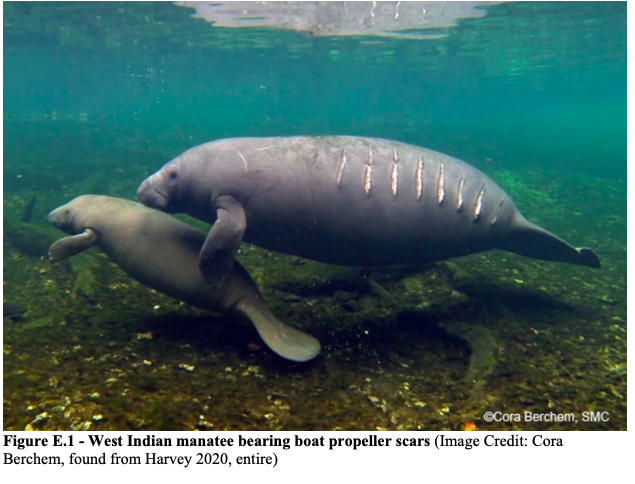 *From Divy: Senatorial candidate Herschel Walker (Republican, of course), goes off on a long rant about werewolves

Meanwhile in Dobrzyn, today’s Hili Dialogue has a title:

Hili: The same, year after year.
A: It too has its charm. 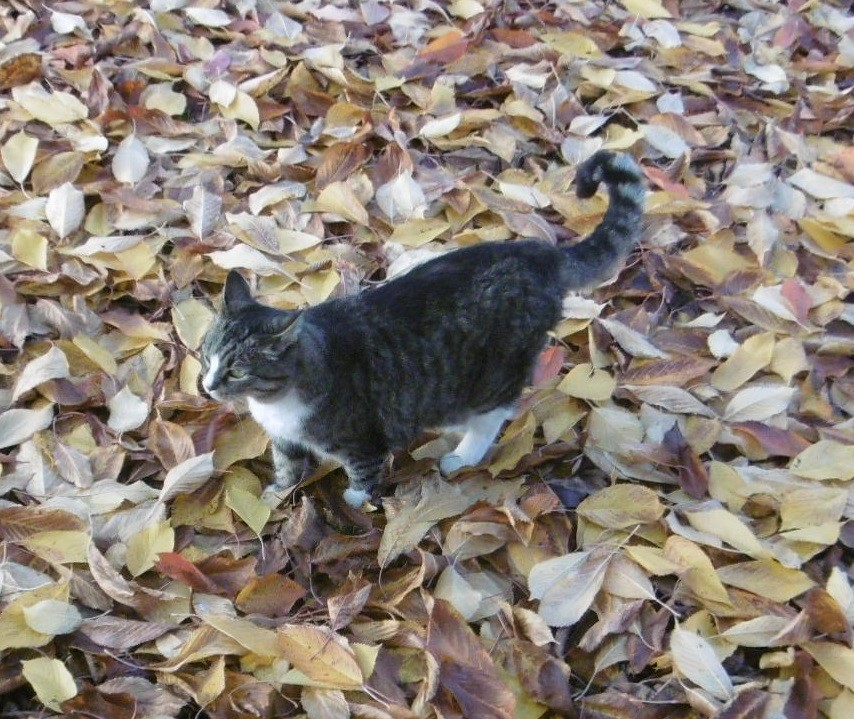 And a photo of Baby Kulka: 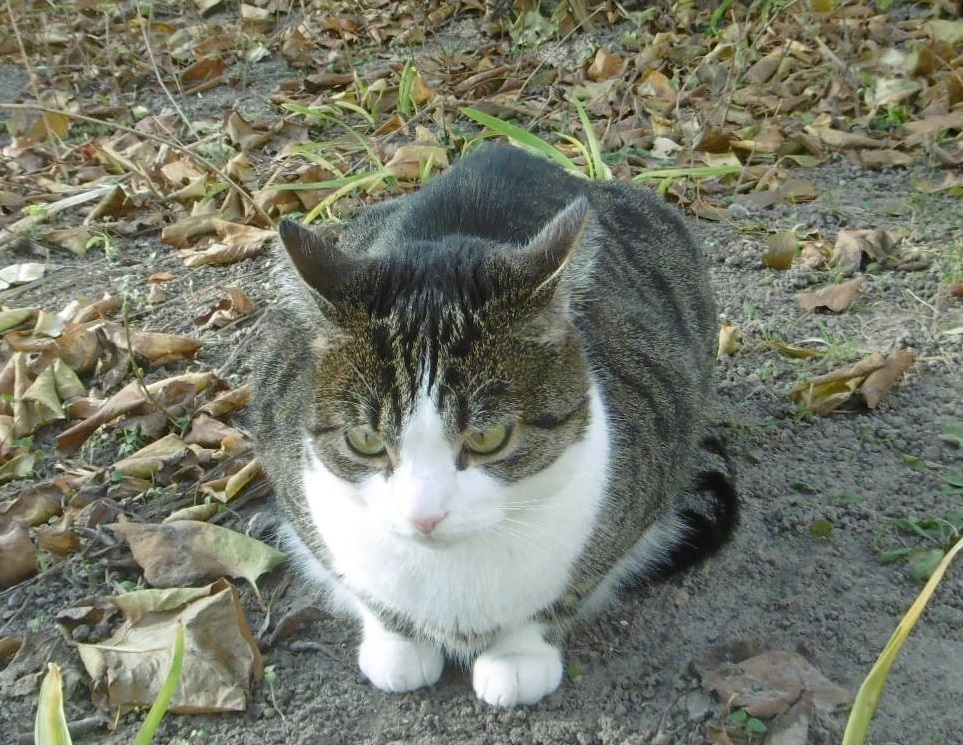 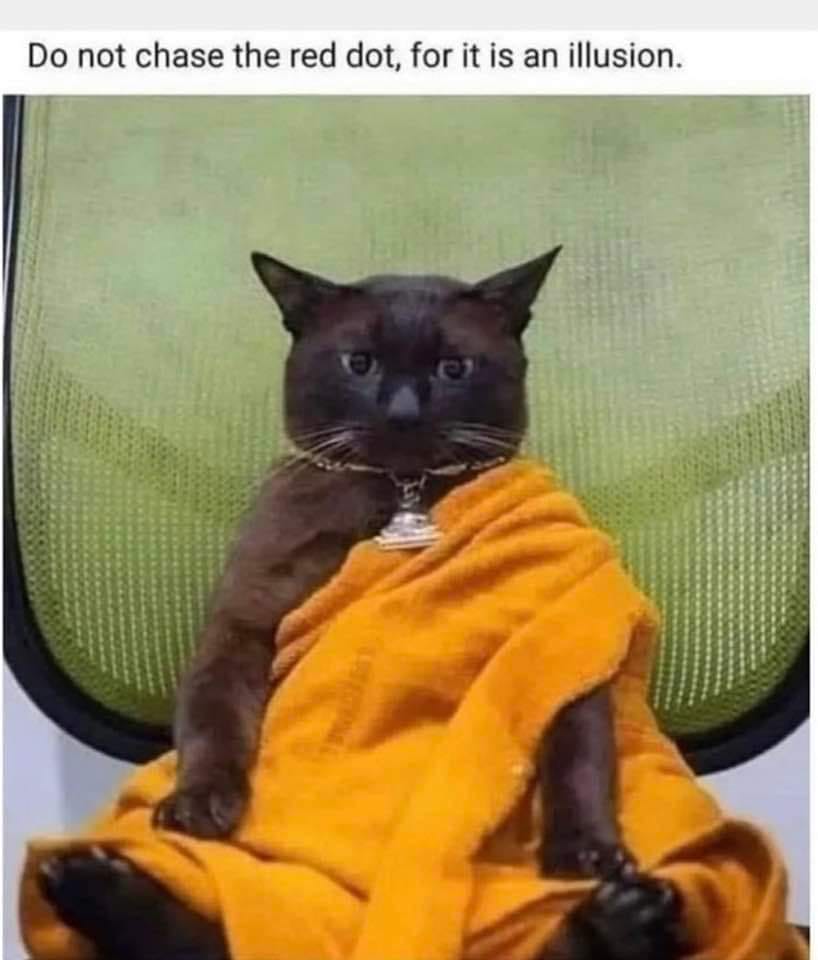 From Matthew, who says I’ve posted a few of these before: 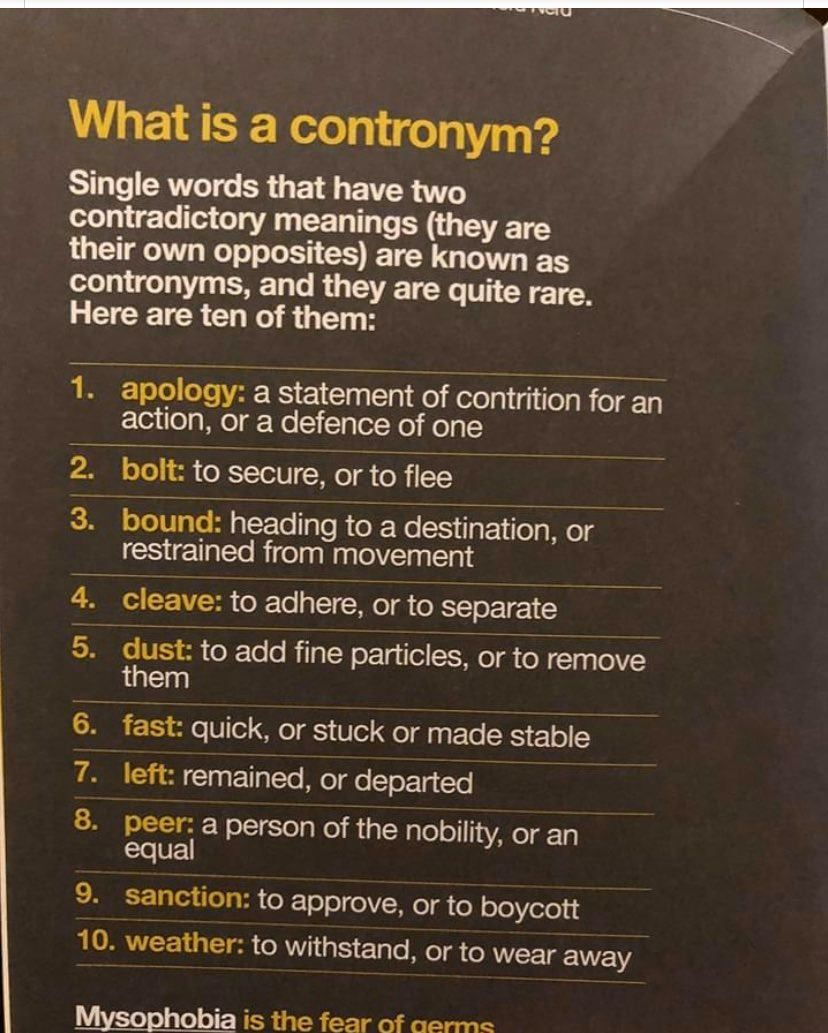 God has joined Mastodon! But the tweets don’t embed (or else I don’t know how), so I’ll have to give a screenshot. Are we all moving to Mastodon?

Two tweets from Masih about the ongoing protests in Iran:

Iran is the only country in the World Cup that its people want their national football team to lose since the team doesn’t represent the people but the regime.We want our people to win in the streets where protesters are getting killed for demanding freedom & dignity.#MahsaAmini pic.twitter.com/1nl91fghhK

Farewell kiss of a mother to her son murdered by the regime.

16-year-old #KarwanQaderShokri from #Piranshahr was killed by the Islamist regime.

In the background, people chant “we will take your revenge”

From Barry: a wonderful tweet showing a girl getting a black kitten. Sound up!

From Malcolm, the Iranian national soccer team refuses to sing its national anthem in Quatar. It’s amazing, and perhaps at last presages the death of the theocracy. (They will get in trouble for sure when they return to Iran.) The coaches also appear to be silent.

To see the national soccer team of Iran refusing to sing the anthem is the real first breaking news from the soccer world championship. Absolutely astonishing and a clear sign that the mullah regime won’t be able to restore the previous status quo. #Iran pic.twitter.com/UdQADKycWP

From the Auschwitz Memorial: brother and sister “gassed upon arrival”:

22 November 1934 | A Dutch Jewish girl, Judic Vischjager, was born in Amsterdam.
She arrived at #Auschwitz on 12 November 1942 in a group of 758 Jews deported from #Westerbork. Together with her brother Jacob she was among 707 of them murdered after the selection in gas chambers. pic.twitter.com/Hx0mAnTzYm

Tweets from the world famous Professor Cobb, who’s redecorating his house. LOOK AT THE SIZE OF THIS RACCOON!

Scientists have finally captured on video the very moment a cat reproduces by mitosis.pic.twitter.com/mVCysaXDCZ