Today’s batch of bird photos, plus a primate and a stanchion, comes from Bernie Grossman, whose notes are indented. Click on the photos to enlarge them:

We took a guided tour in 2014 to Japan in winter to see resident and migrant birds, particularly the cranes. We traveled first to the area called the Japanese Alps, which is an east -west band north of Tokyo. The famous Snow Monkeys are found here (Tourist Trap). Then we went to the southernmost island (Kyushu) and the city, Kagoshima, where the Hooded and White-naped Cranes winter. The last stop was Hokkaido, which was having its worst winter in years. Most of the island except the eastern coast was blocked. The best birds here were the Red-crowned Cranes and White-tailed and Steller’s Sea Eagles. We missed the Blakiston’s Fish Owl, the world’s largest owl. 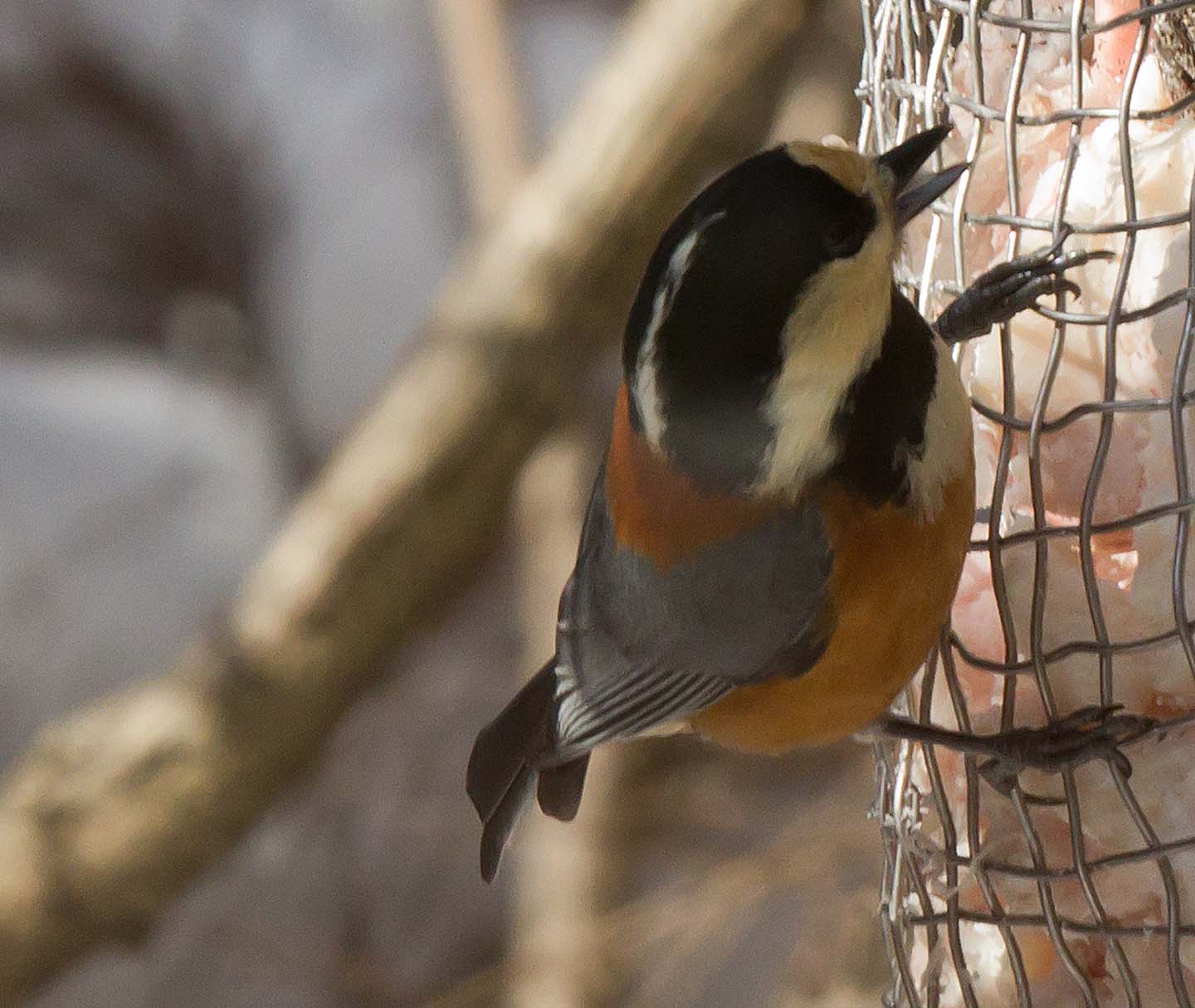 Eurasian Nuthatch (Sitta europaeca amurensis)  This taxon is found in the Japanese Alps and south: 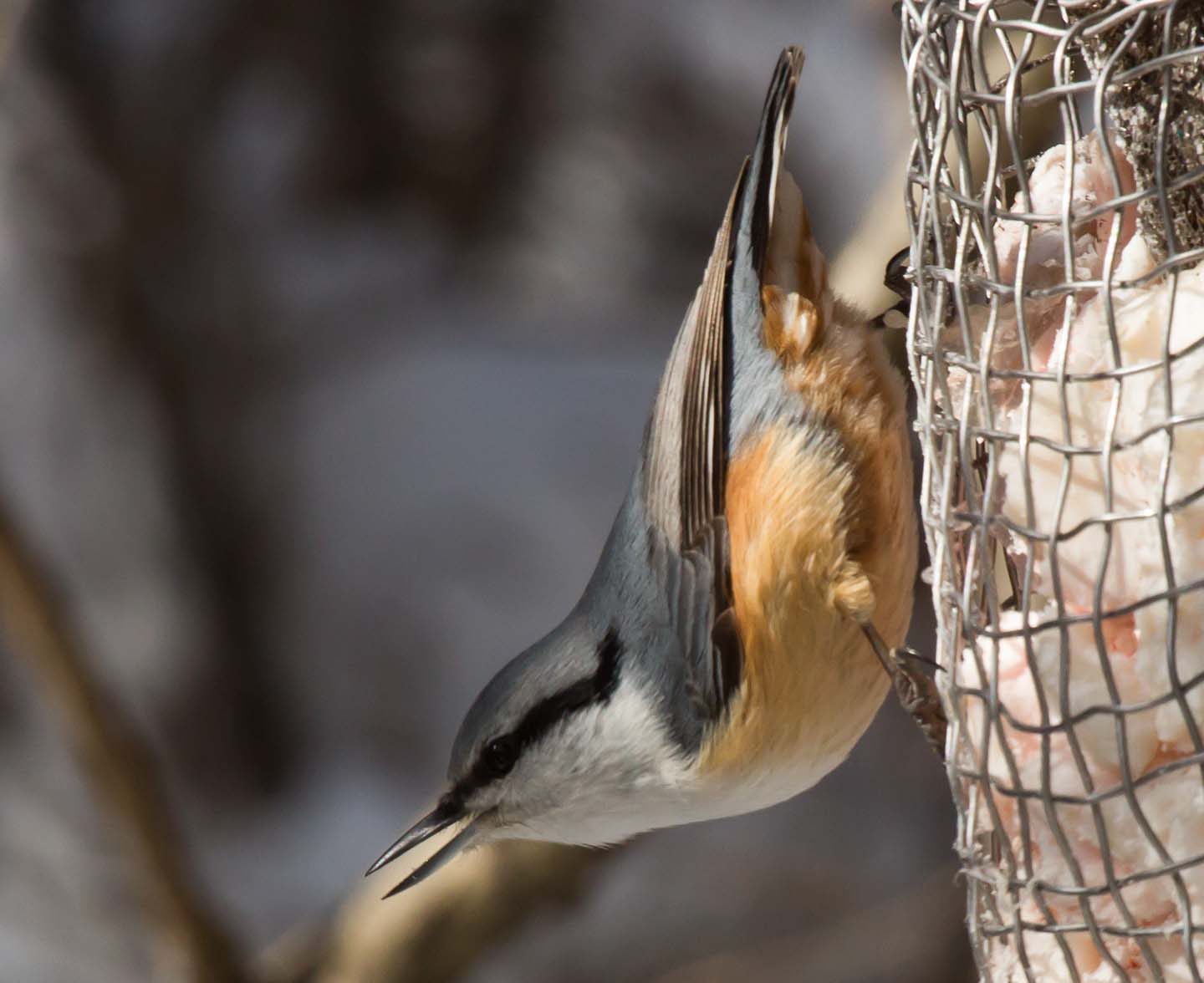 Japanese Macaque (Macaca fuscata)  Also accompanied by a similarly furred member of genus Homo. The apes bath in artificial pools fed by nearby hot spring. The pools are located in a national park and required a long walk along an icy road: 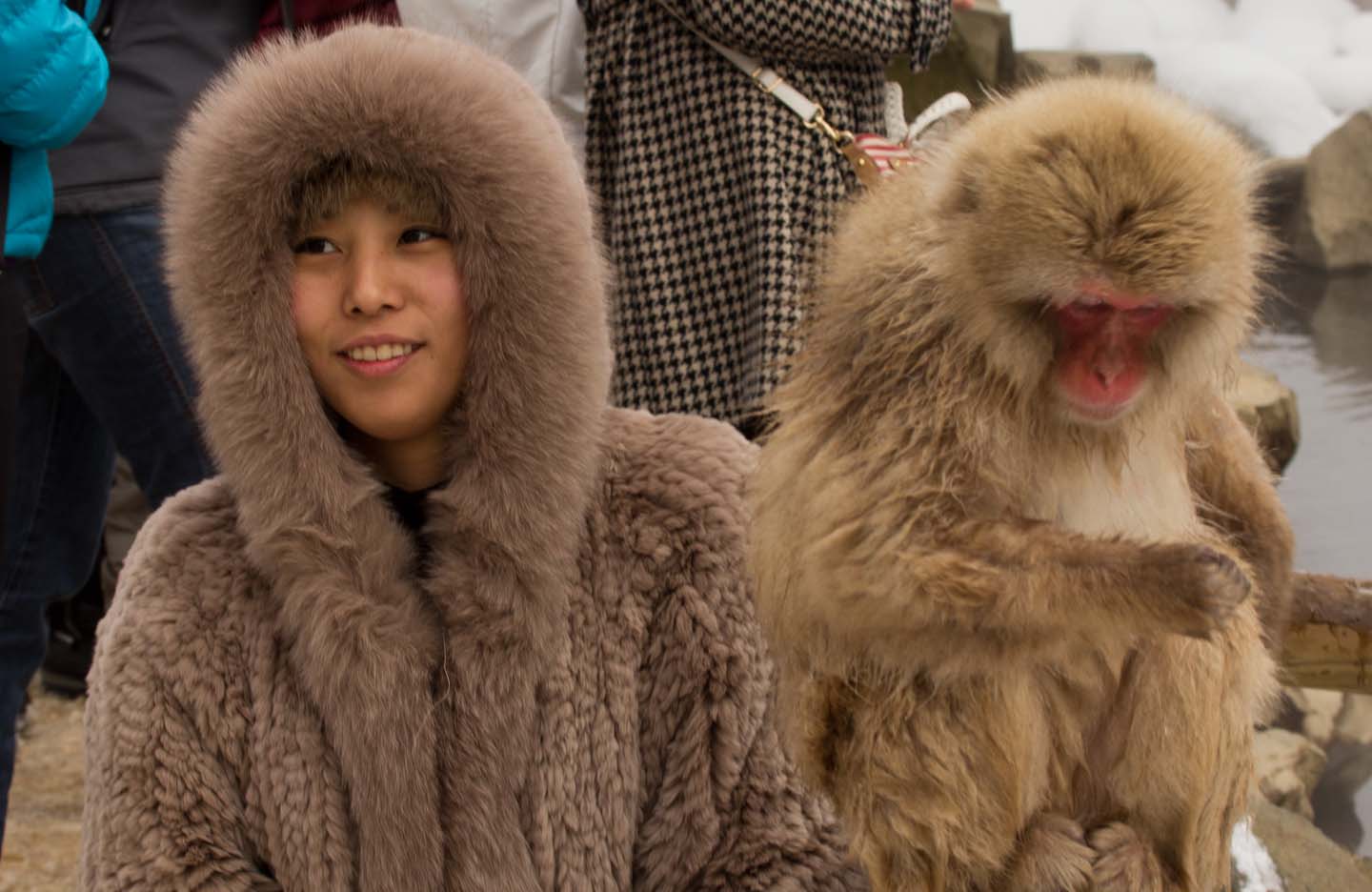 Hooded Crane  (Grus monacha)  These and the next crane species migrate into southern Kyushu for the winter and feed in large numbers in agricultural fields. The local government established a crane feeding center where grain and corn is spread. This attracts thousands of cranes which are viewed from the visitors’ center: 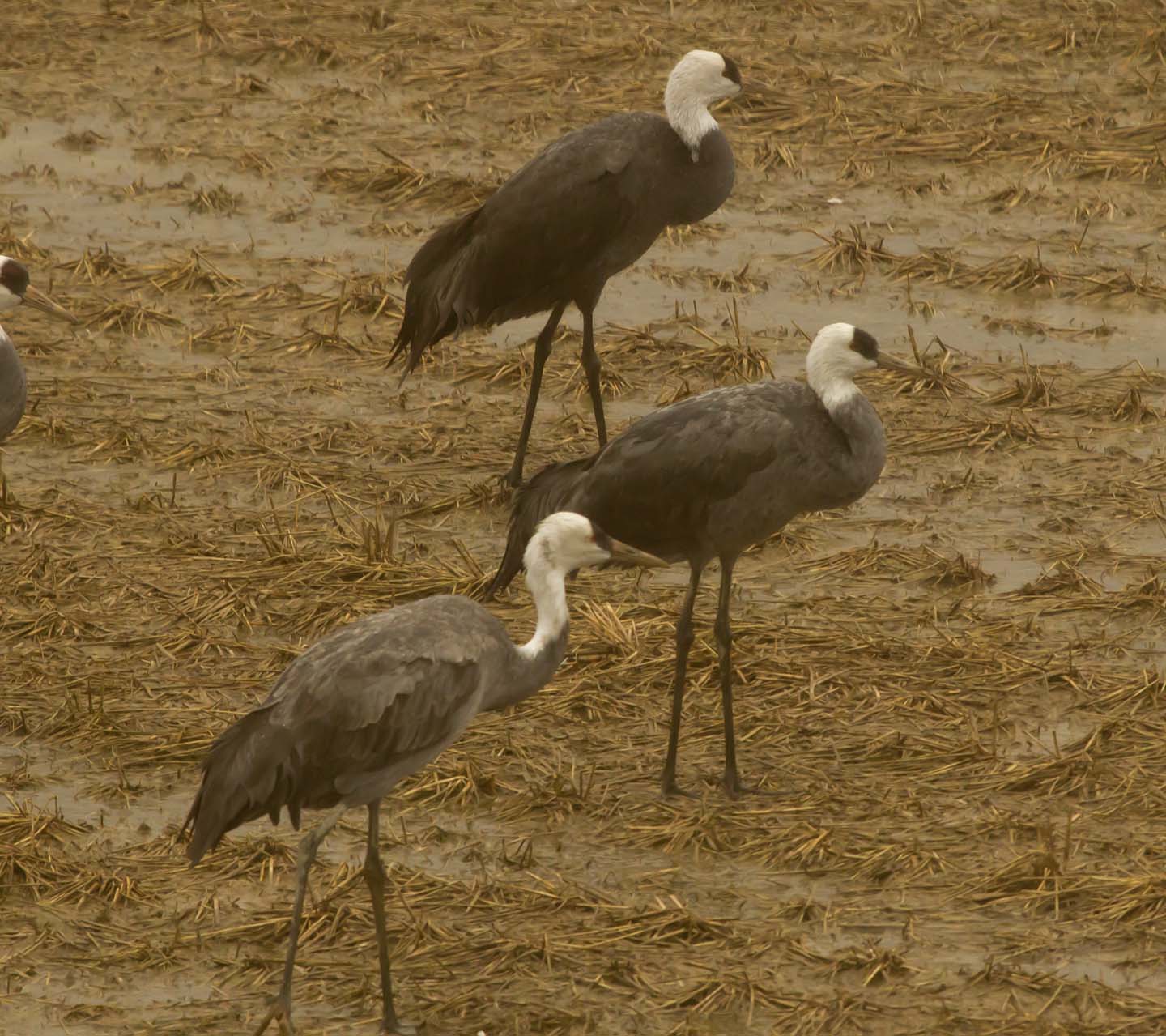 White-naped Crane  (Grus vipio)  This species was the less abundant of the two at the center. Also present were three Sandhill Cranes (Grus canadensis) and two Common Cranes (Grus grus): 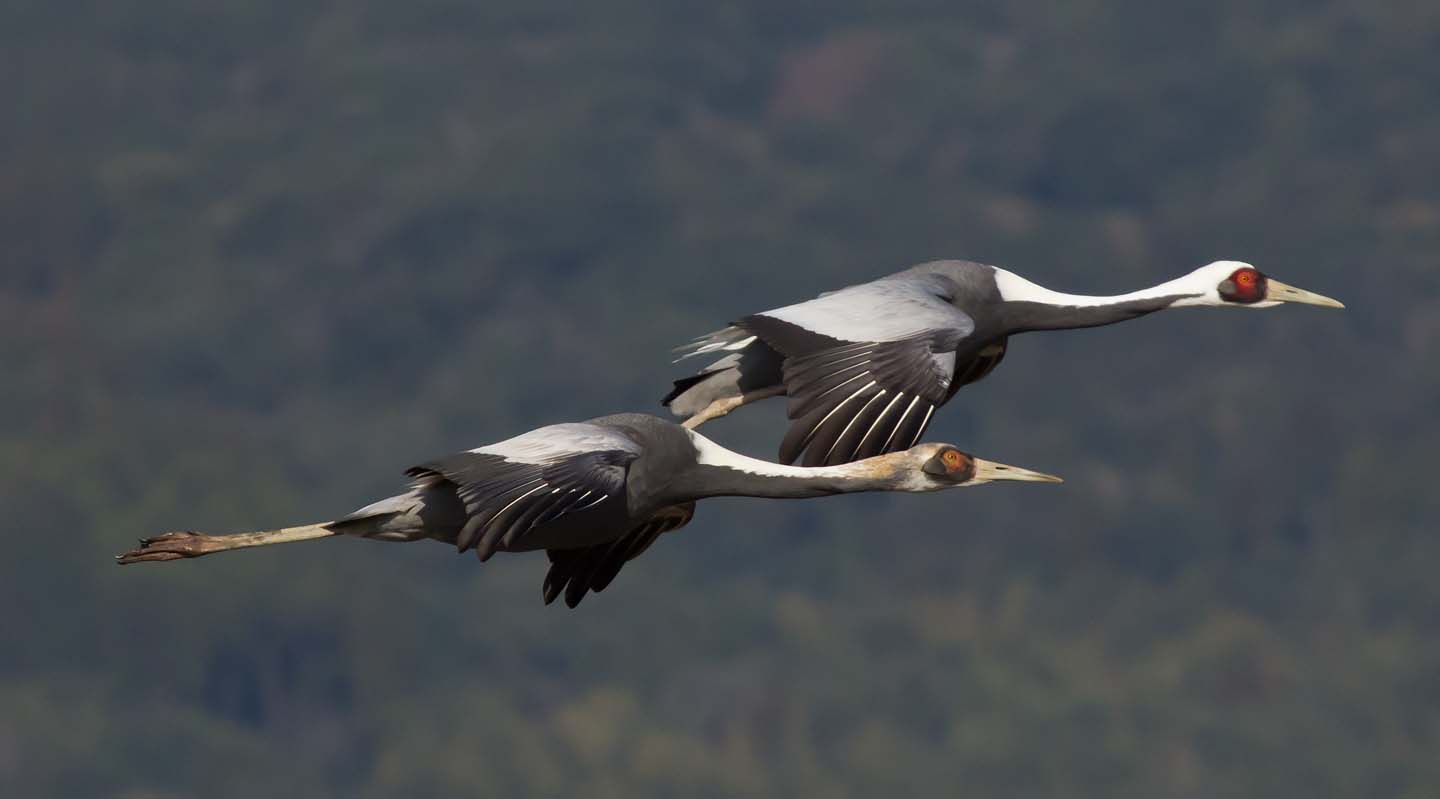 Japanese White-eye (Zosterops japonicus)  We were surprised to see fruit trees in bloom is southern Kyushu in February. The White-eye was photographed in a flowering hedge in a farming area: 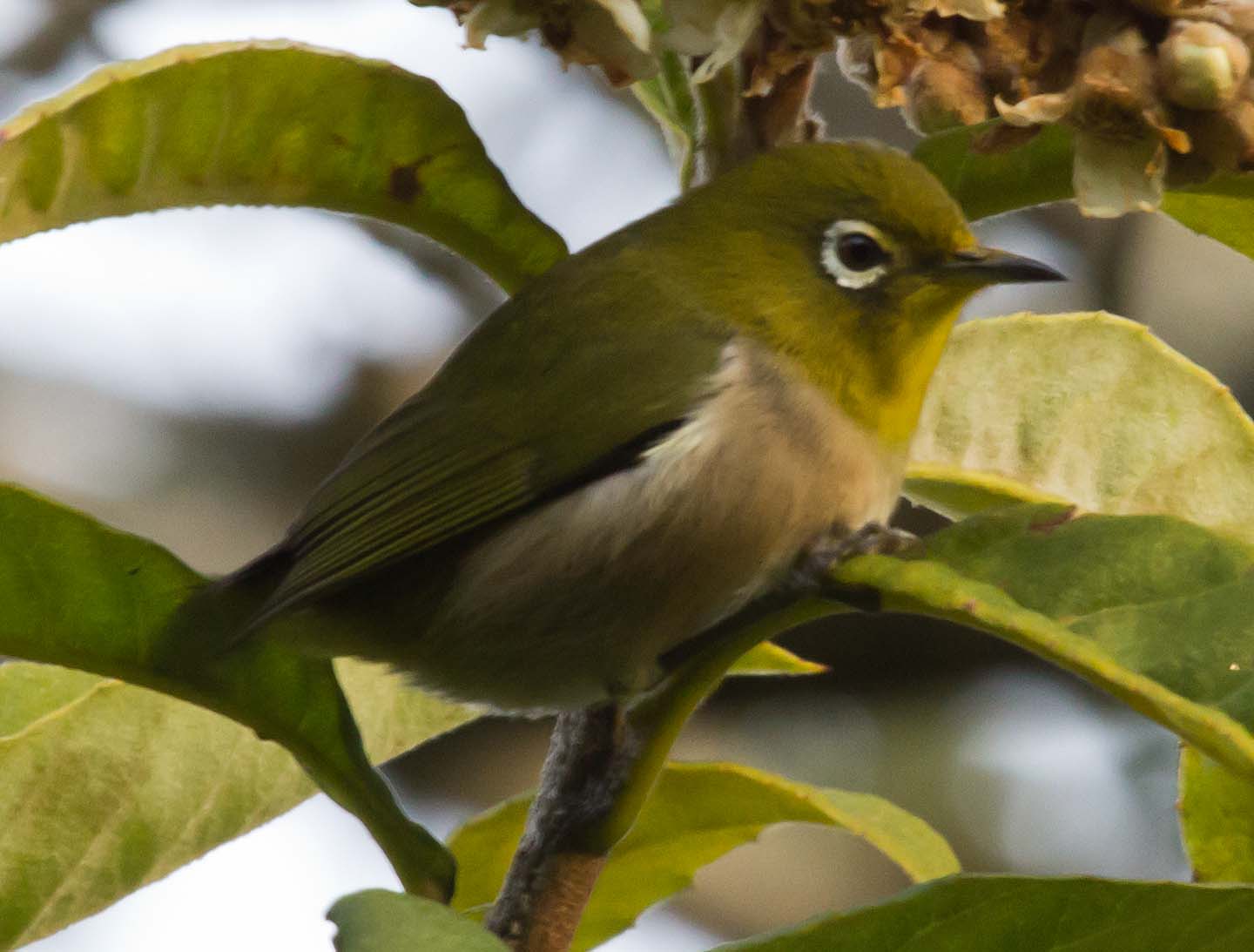 Red-crowned Crane (Grus japonensis)  This is the national bird of Japan and is found in numbers near Kushiro in Hokkaido. They are large, graceful birds which we saw mostly at feeding stations where grain was spread on the snow. We saw others feeding in streams, etc. There is a famous bridge over a small stream that attracts large numbers of photographers with big 600mm prime lenses and other kit.  The government built a second, parallel bridge strictly for photographers and safety. If it is cold enough (<20F), a fog forms above the warm water. The cameras have remote triggering and fast frame settings, so when a crane emerges from the mist and/or does its dance, the cameras are fired. It sounds like a whole machine gun squad shooting. I asked one guy how much time it takes to process all the pictures. He responded, “Who processes!” On a second trip five years later taken in the spring, we saw a few of the cranes in Hokkaido including a pair with two chicks: 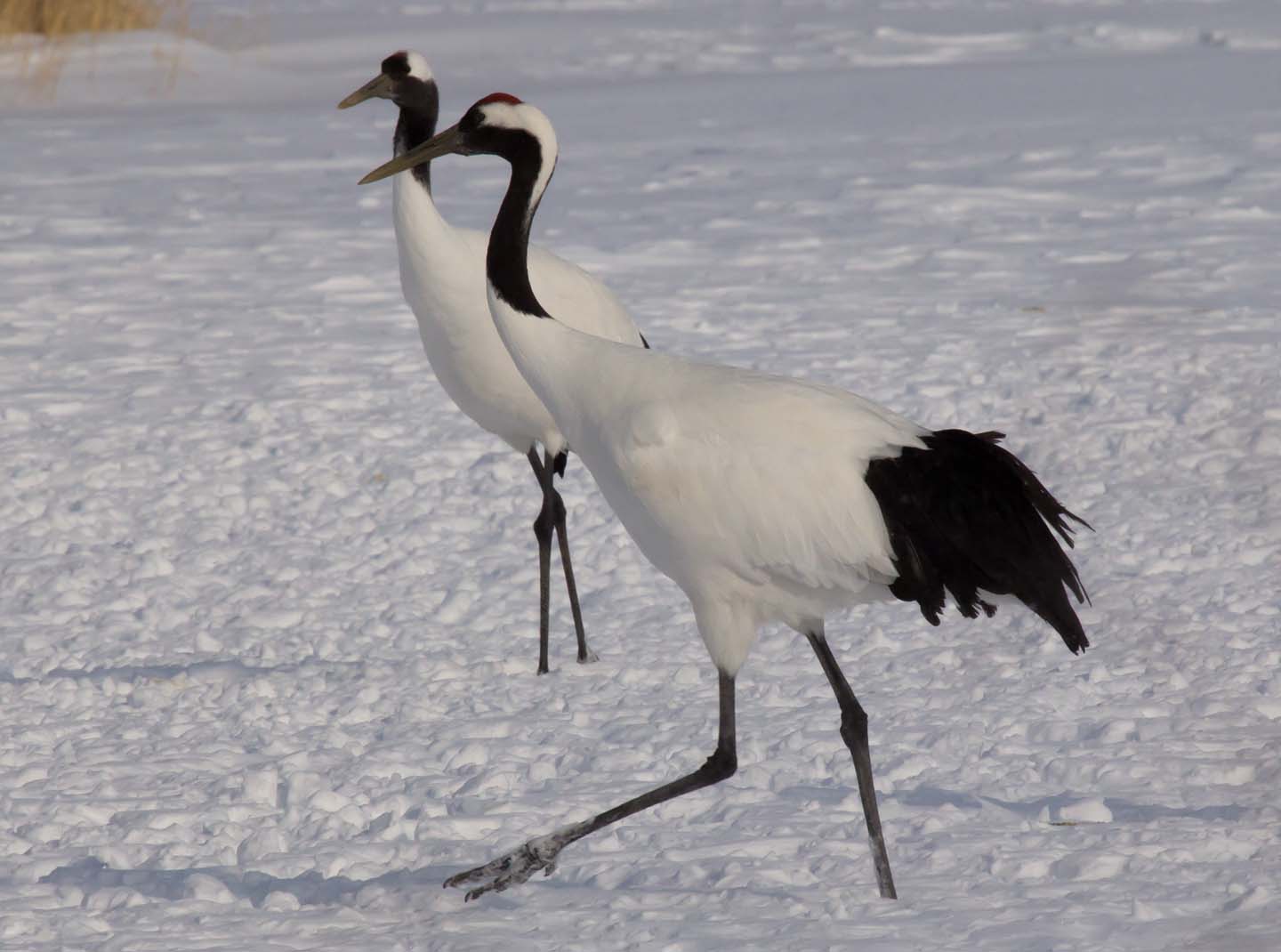 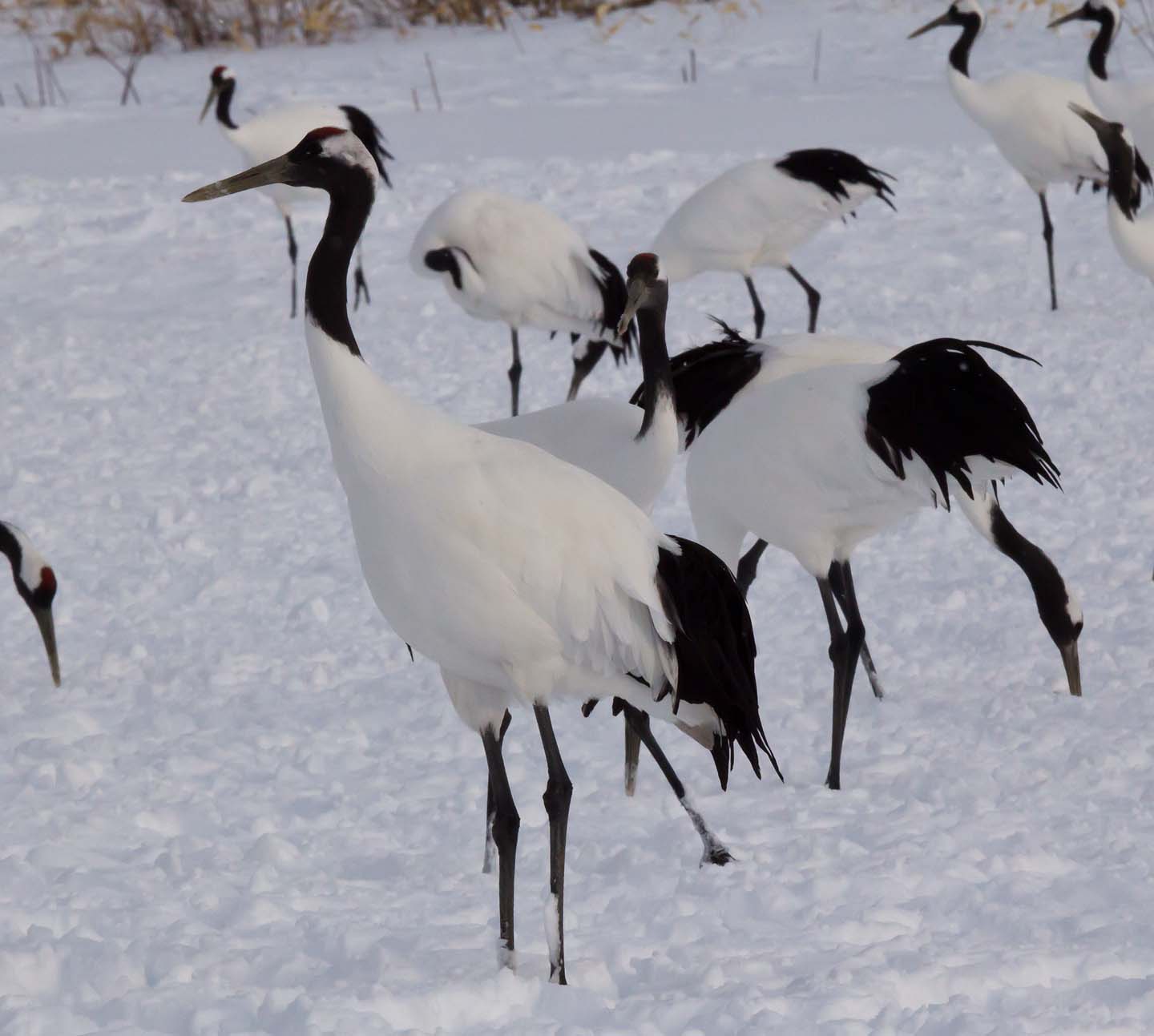 Hawfinch (Coccothraustes coccothraustus)  Photographed in snowy woods in the northeast peninsula of Hokkaido: 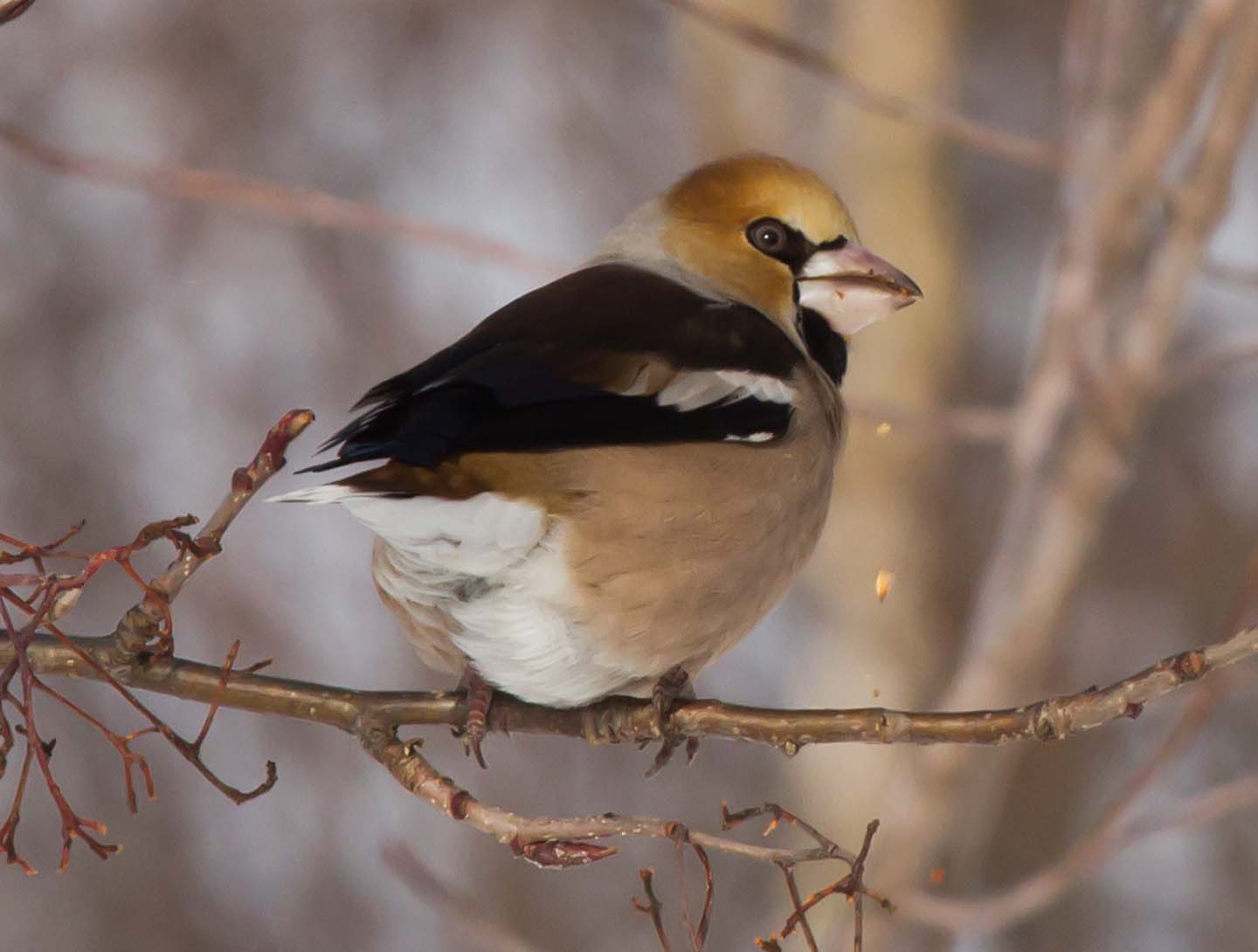 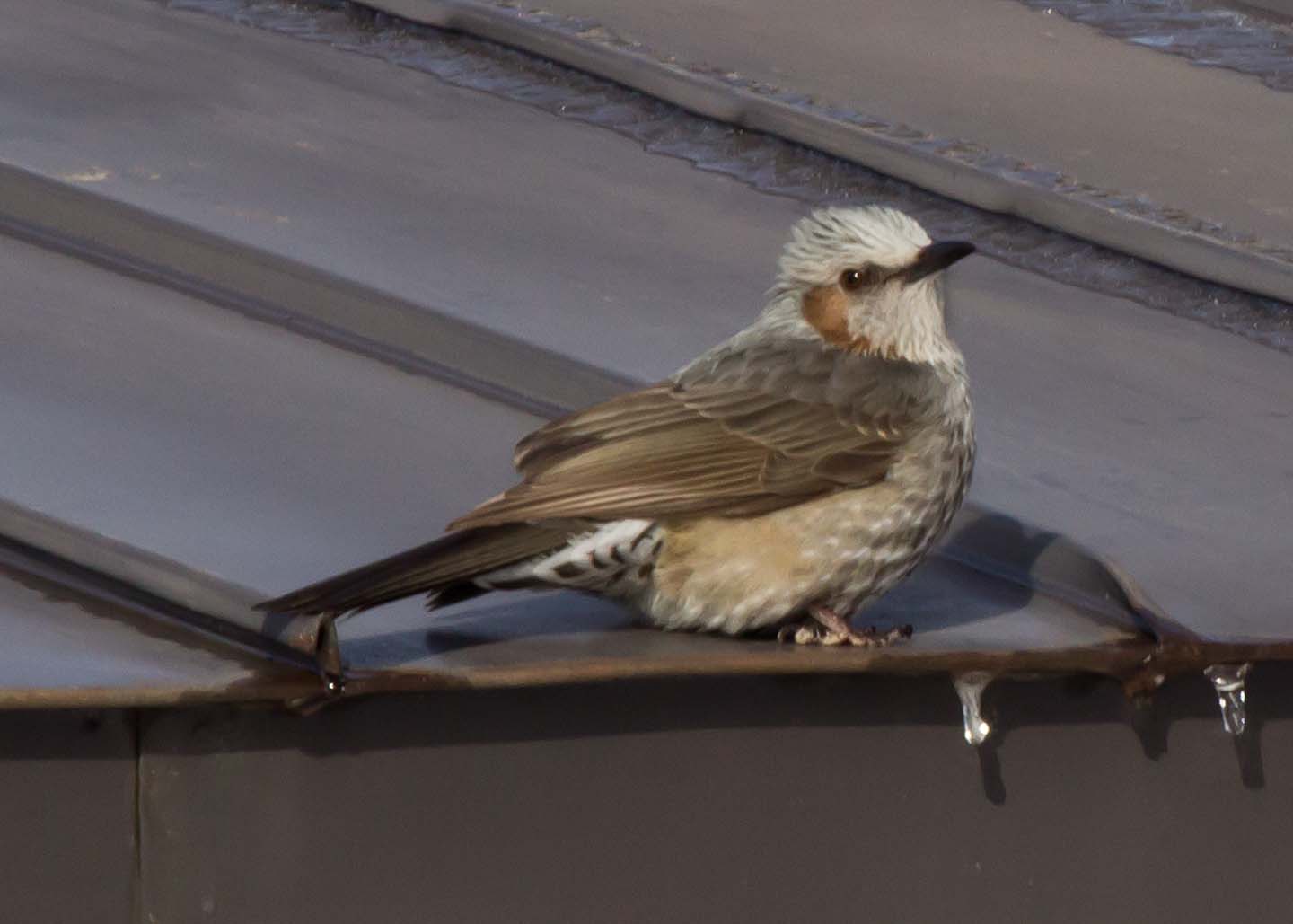 Ural Owl (Strix uralensis)  A winter resident. This shot required a slog down a hill through deep snow to a tree with a big hole in the trunk. The owl  was calmly sunning itself and giving great views: 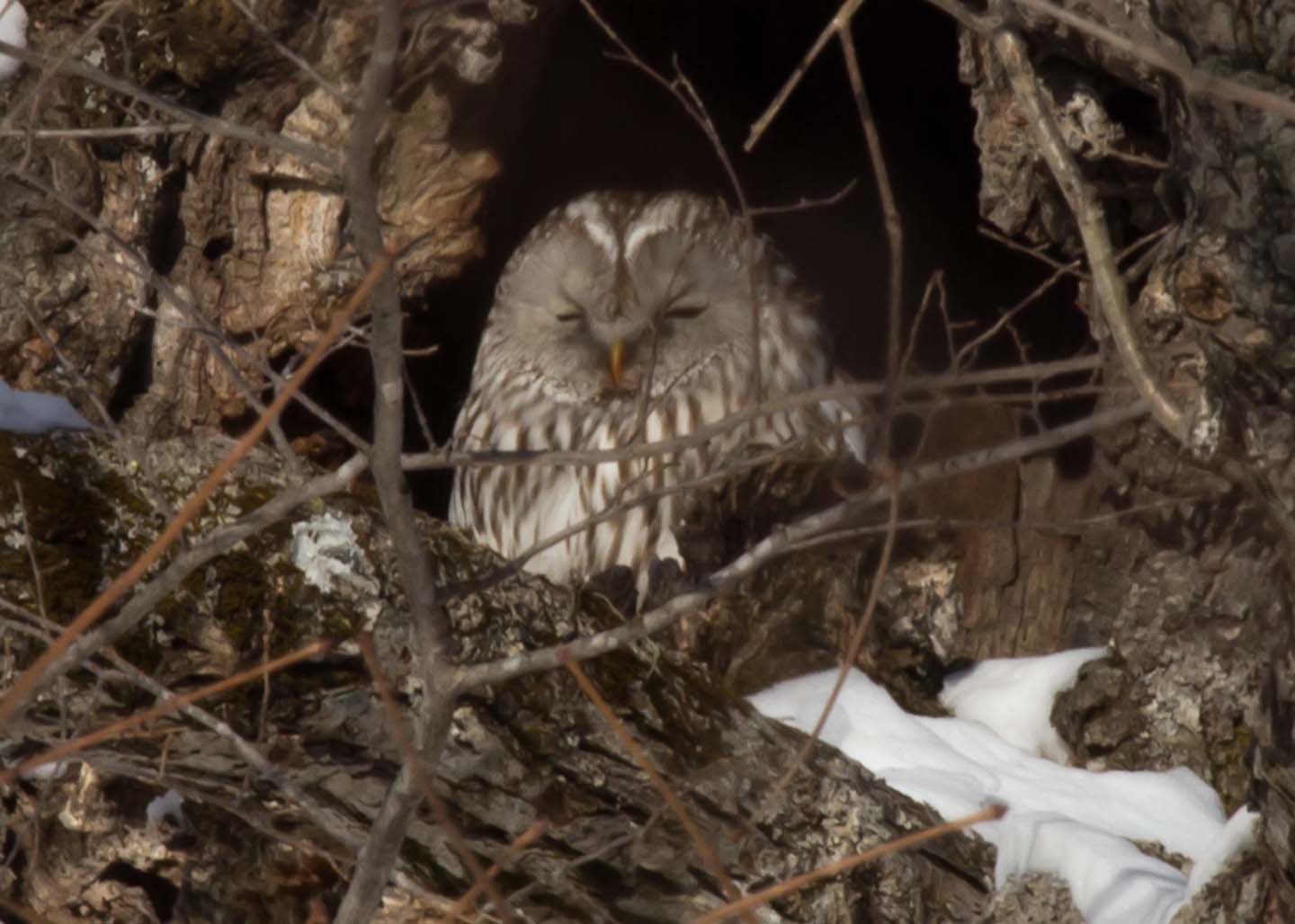 White-tailed Eagle  (Haliaeectus albicilla)  While this species can be found in the whole of northern Eurasia, they are concentrated on the Notsuke Peninsula in northeastern. Hokkaido. This is a cold, windswept point of land used mostly by commercial fishermen. We found it empty and snow covered. These eagles were perched along the shore: 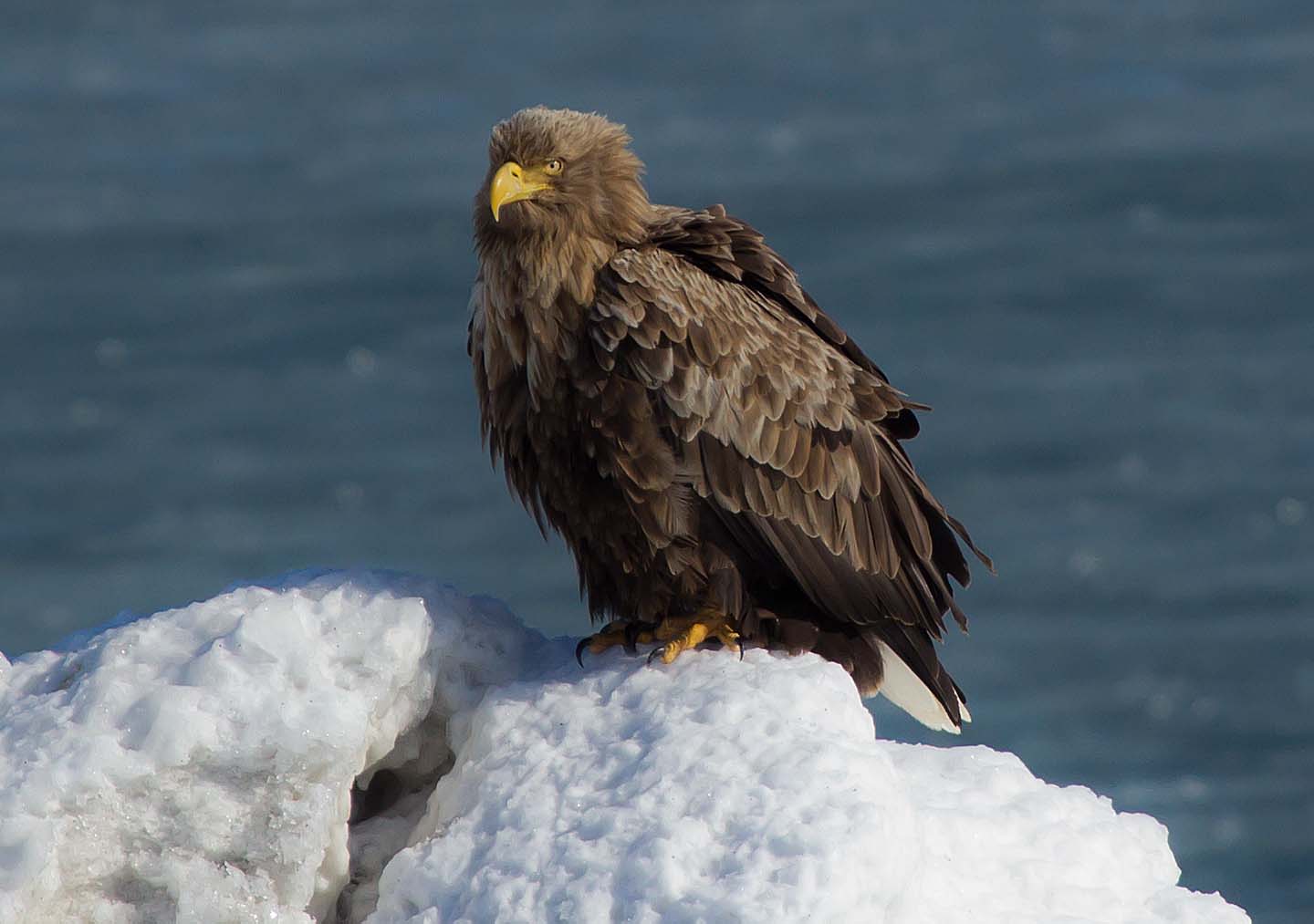 Steller’s Sea-eagle  (Heliaeetus pelagicus)  This is the wold’s largest eagle and is usually found along the northeastern edge of Asia (Manchuria and Russia). Some move south to Hokkaido in the winter. One was sitting on a power pole along the Notsuke road. We were able to approach fairly closely by very slowly walking toward it. It was huge with a magnificent beak: 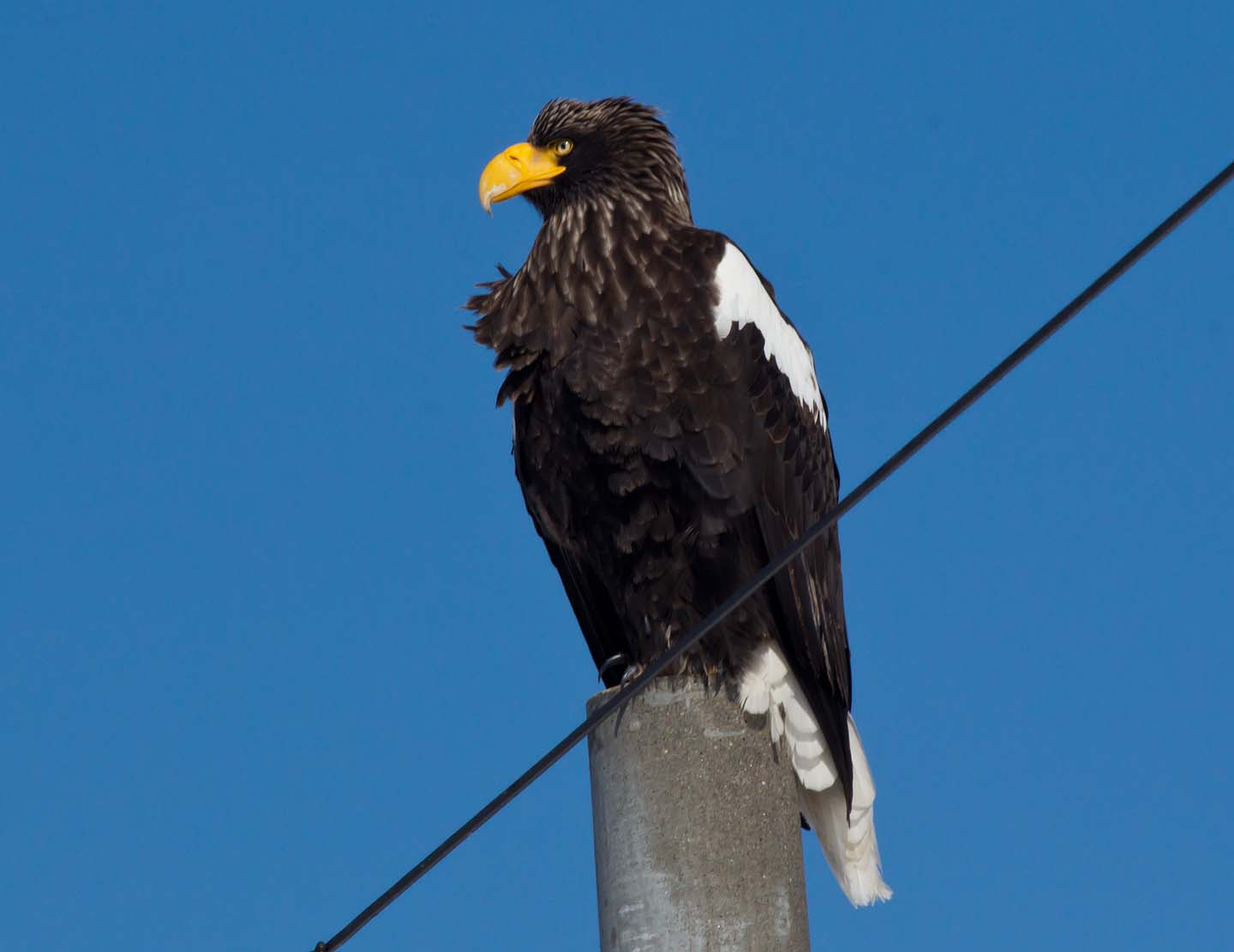 Eurasian Jay  (Garrulus glandarius brandtii)  This taxon was seen in Hokkaido and has a dark eye. Another taxon, japonicus, has a pale eye. The species is seen across Eurasia. 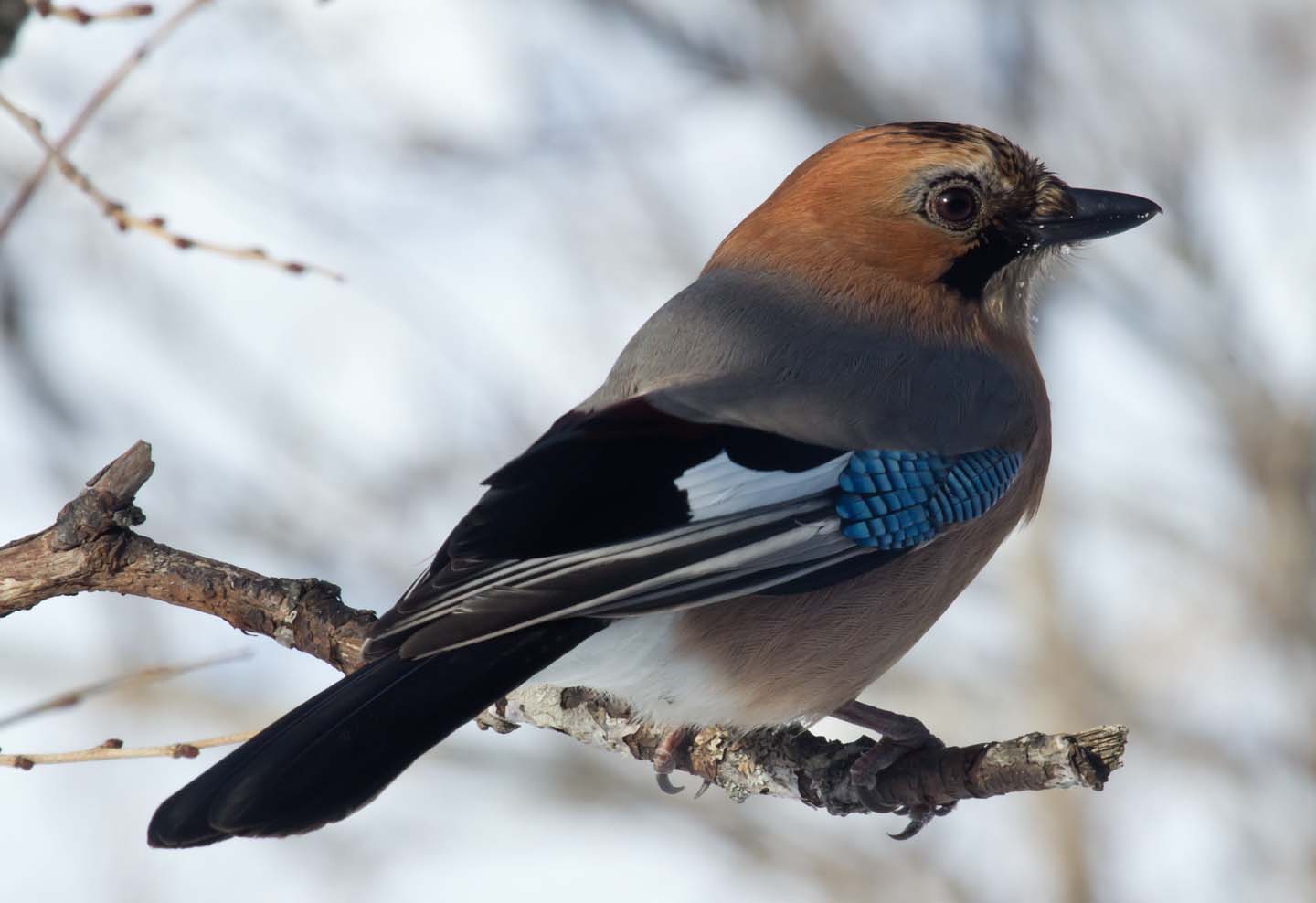 Bunny Stanchion  (Stanchion stanchicus bunni)  These stanchions as well as others shaped like monkeys, raccoons, and others were seen all around Japan. They usually supported galvanized pipe. 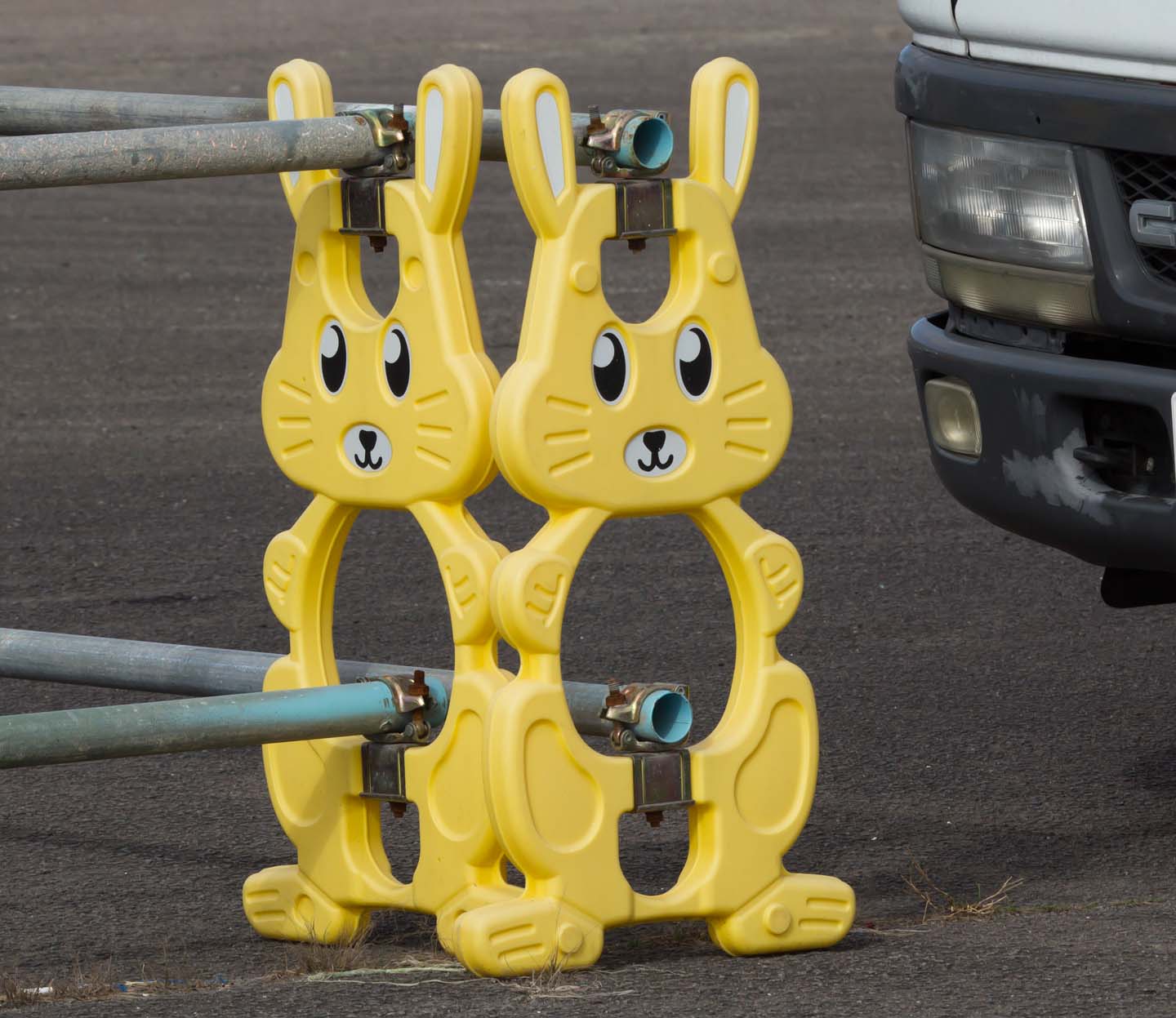