It’s time for the winners of the Wildlife Photographer of the Year Contest from London’s Natural History Museum. Several readers sent me an NPR website that shows some of the better entries, and I’ll show give my five favorites with their captions, as well as quotes from the LNHM site. Click on the screenshot to see ’em all, though, and go to the Natural History Museum website to see a big set. I’ll put up my five favorite photos.  Do click on them to enlarge them.

Here’s the winner for invertebrates, and quite a photo it is (captions are indented). I suppose there’s a winner in each category.

Invertebrates Winner: The big buzz. South Texas, USA. The world’s bees are under threat from habitat loss, pesticides and climate change. With 70% of bee species nesting underground, it is increasingly important that areas of natural soil are left undisturbed.

Karine Aigner/Wildlife Photographer of the Year

The Natural History Museum explains this as a “mating ball” that forms when males of a solitary bee compete for a single female:

The species she came across belongs to the genus Diadasia, which are considered solitary bees. This means that, unlike honeybees for example, they do not build hives and live as a collective. Instead, they nest individually in the ground, and the female has the sole responsibility of building her own nest.

Importantly, the species has a male bias, and there are many more males than females. As a result, competition to mate with the few existing females is fierce.

When it is time to mate, the males emerge first, explains Dr Joseph Monks, Curator of Hymenoptera at the Museum. ‘Up to several thousand males emerge at the same time. They patrol the nesting area and then compete intensively for the females, which emerge periodically.’

‘This is why they form the mating balls,’ he continues, ‘they are fighting for access to a newly emerged female’.

It is this dramatic moment that Karine captured so vividly. Her winning shot shows numerous males struggling with one another, competing for the opportunity to mate with the solitary female.

Following this intense fight, Joseph continues, ‘The female will emerge from the ball with a single male clinging to her. After a few seconds or minutes, they will mate and then the female will start constructing and provisioning a nest.’

This mating behaviour is relatively rare, even among ground-nesting bees. . . 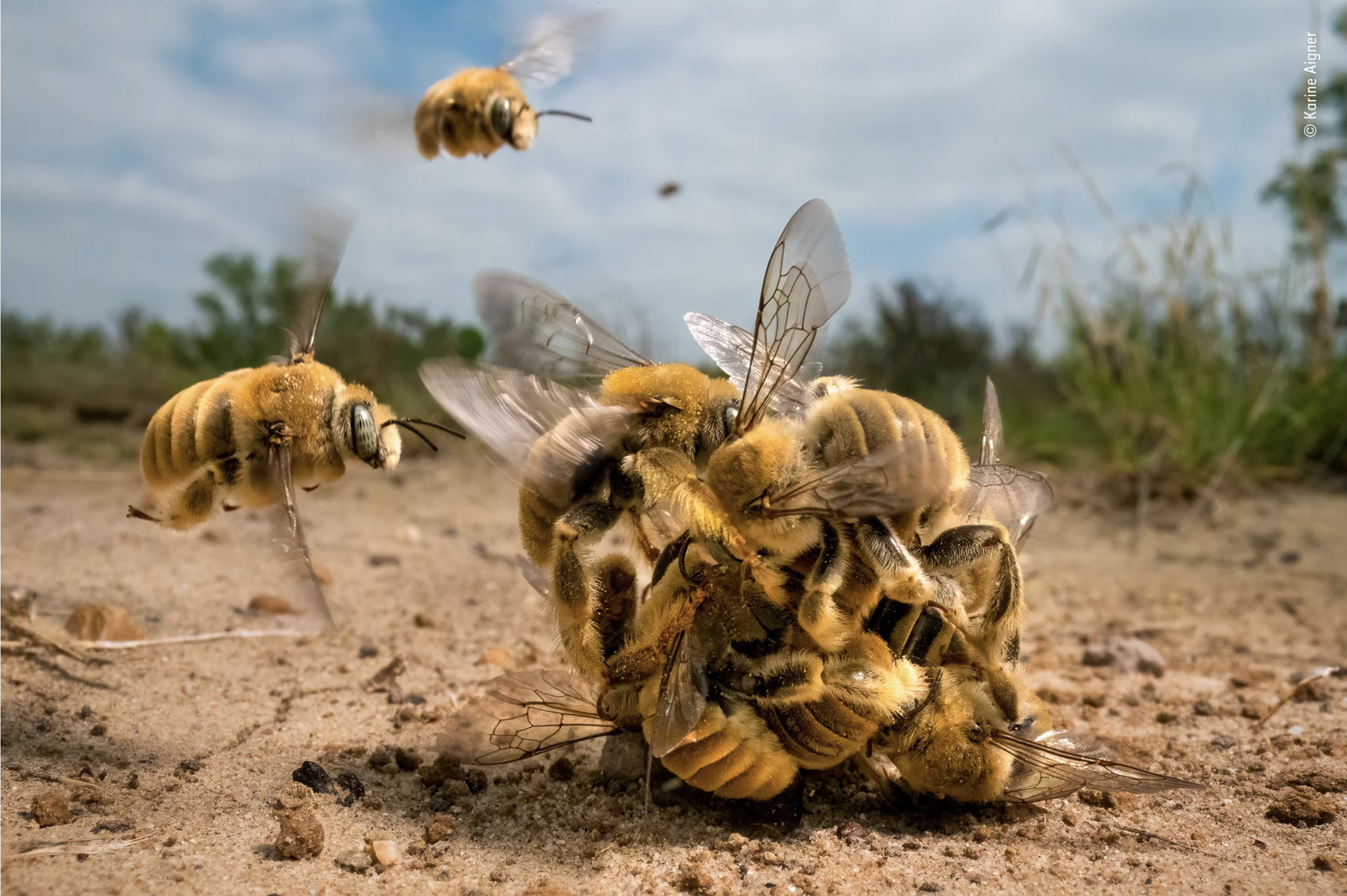 Junji Takasago/Wildlife Photographer of the Year 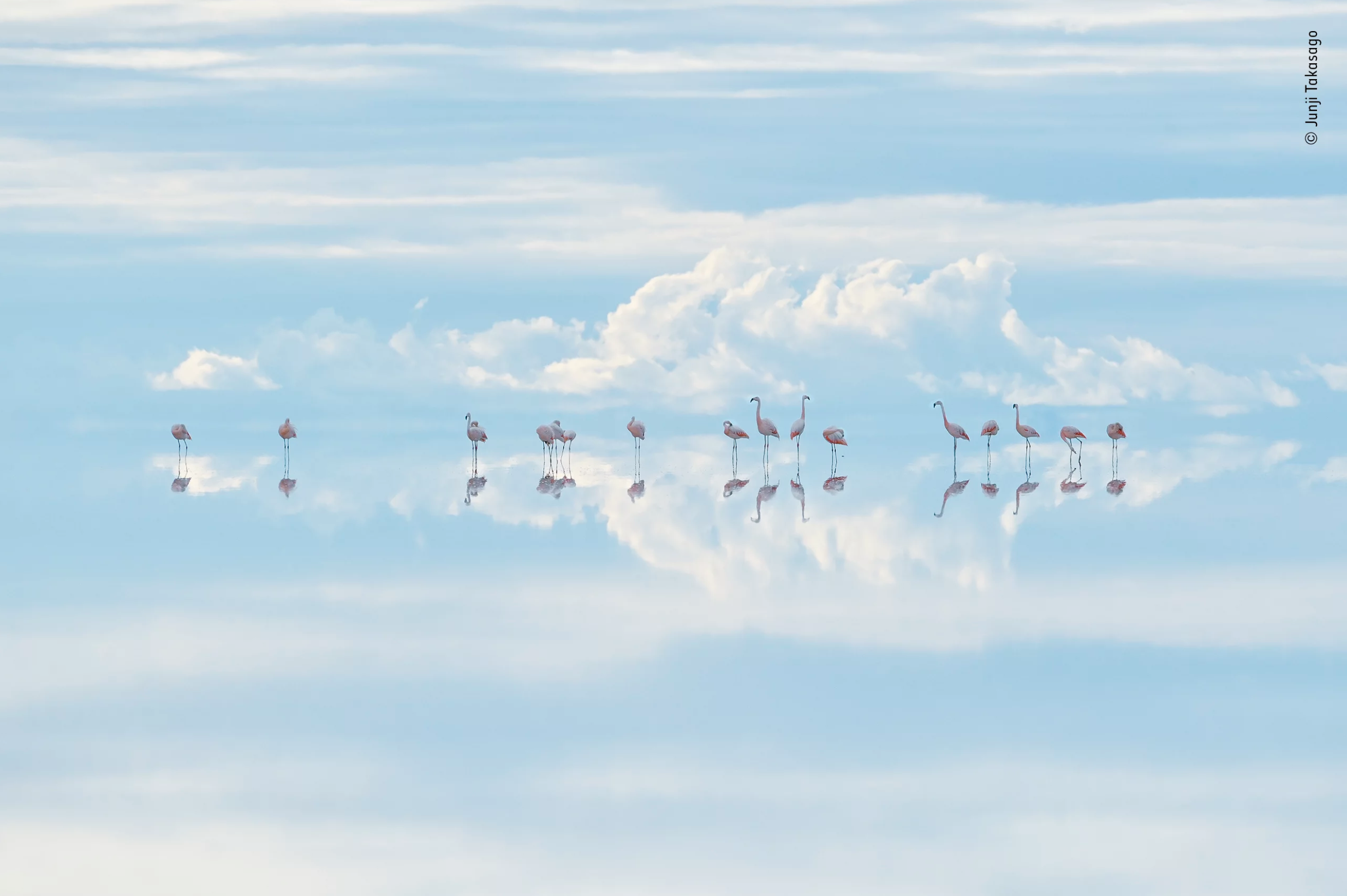 Does this remind you of the Fat Bear contest?

Bear bonanza. Katmai National Park and Preserve, Alaska. When the salmon arrive in summer, so do the bears. Though they are usually solitary, they congregate in large numbers to fish.

Adam Rice/Wildlife Photographer of the Year 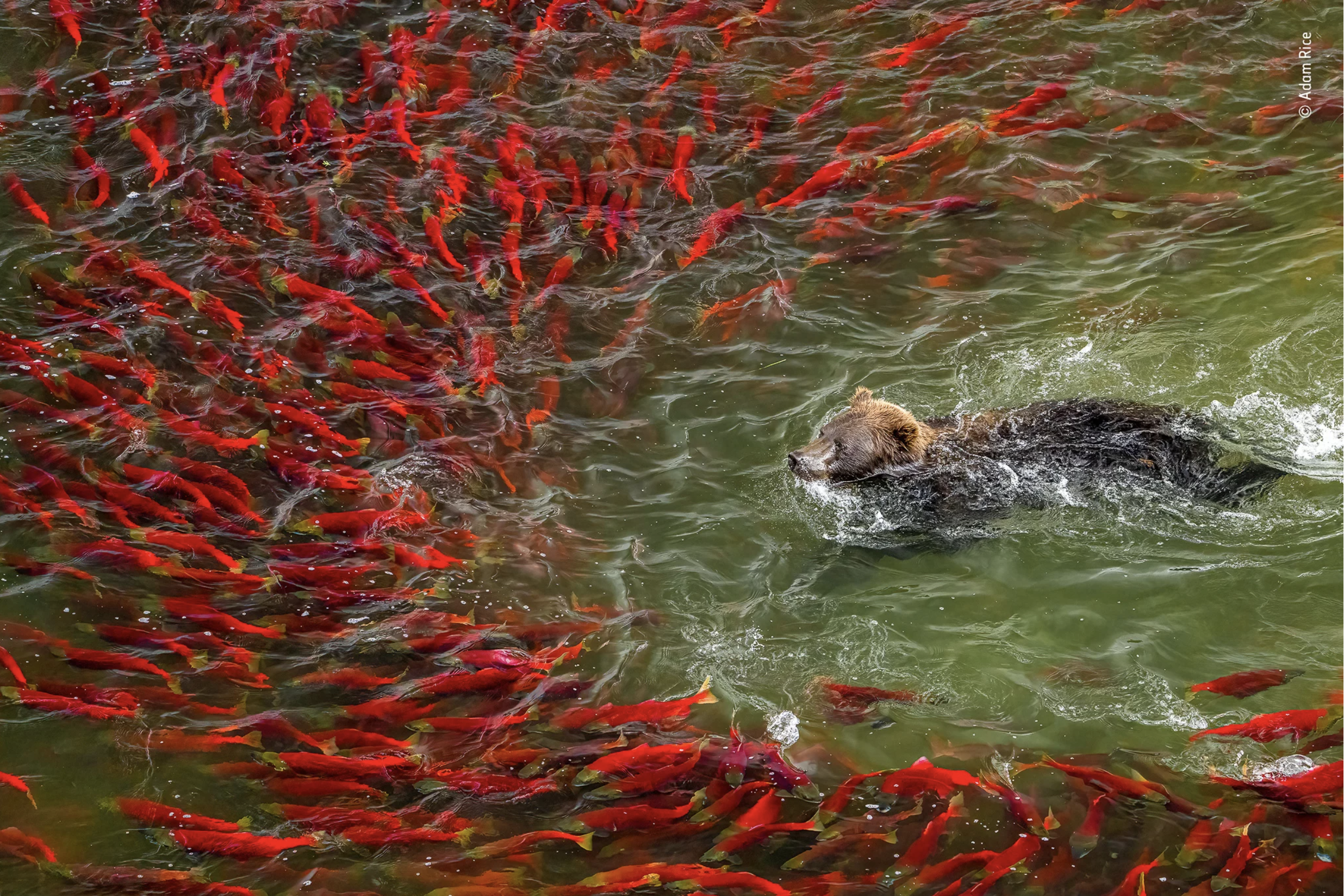 This one’s a bit grim:

Amphibians and Reptiles Winner: The bat-snatcher. Kantemo, Quintana Roo, Mexico. Every evening at sundown in the Cave of the Hanging Snakes, thousands of bats leave for the night’s feeding. It is also when hungry rat snakes emerge, dangling from the roof to snatch their prey in midair. 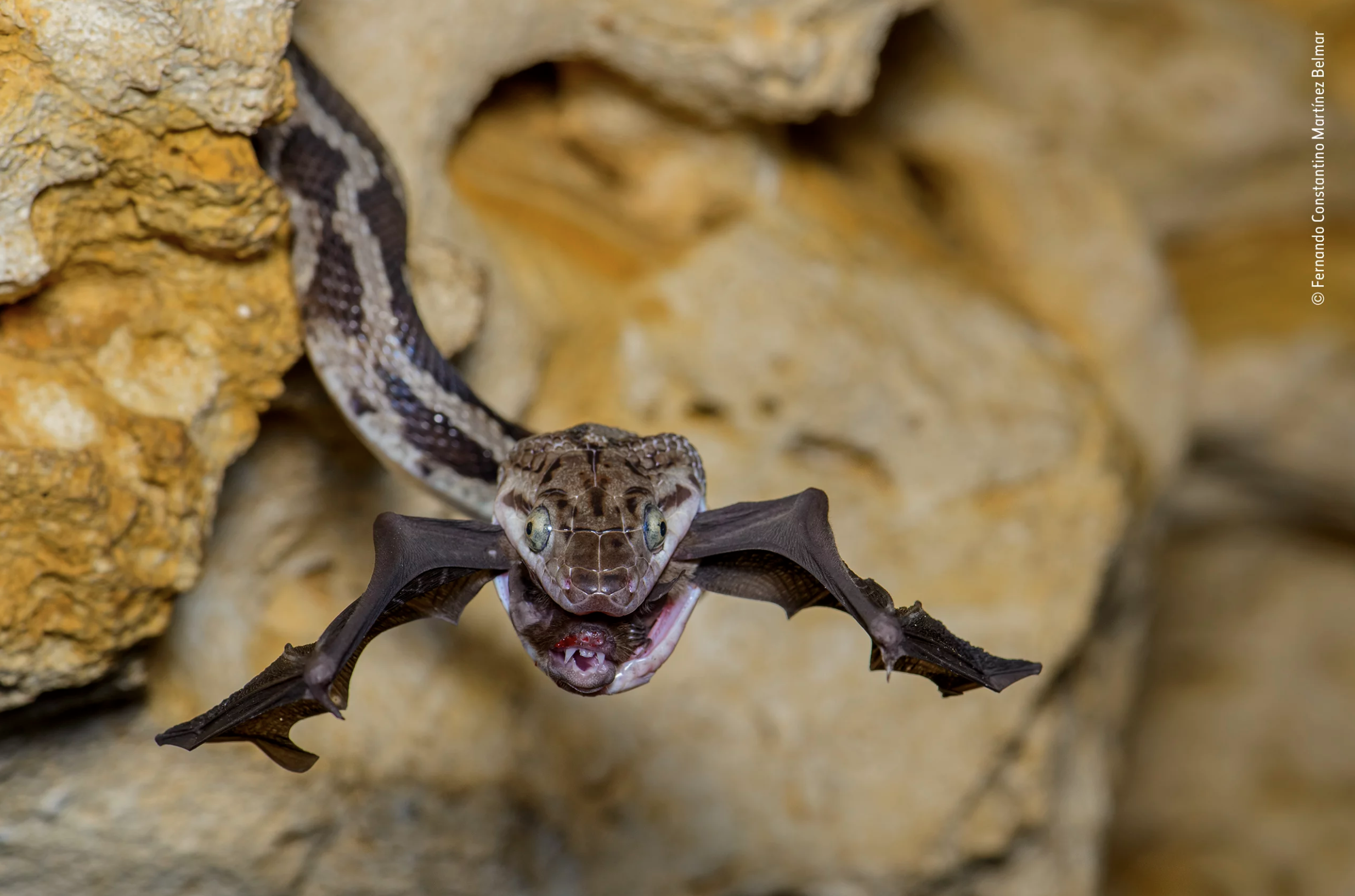 Underwater Winner: Shooting star. Kinko Bay, Kagoshima Prefecture, Japan. This is a male Leiaster leachi sea star broadcasting sperm into murky water in a shallow bay. Other nearby sea stars were broadcasting sperm and eggs into the water in synchrony.

Tony Wu/Wildlife Photographer of the Year 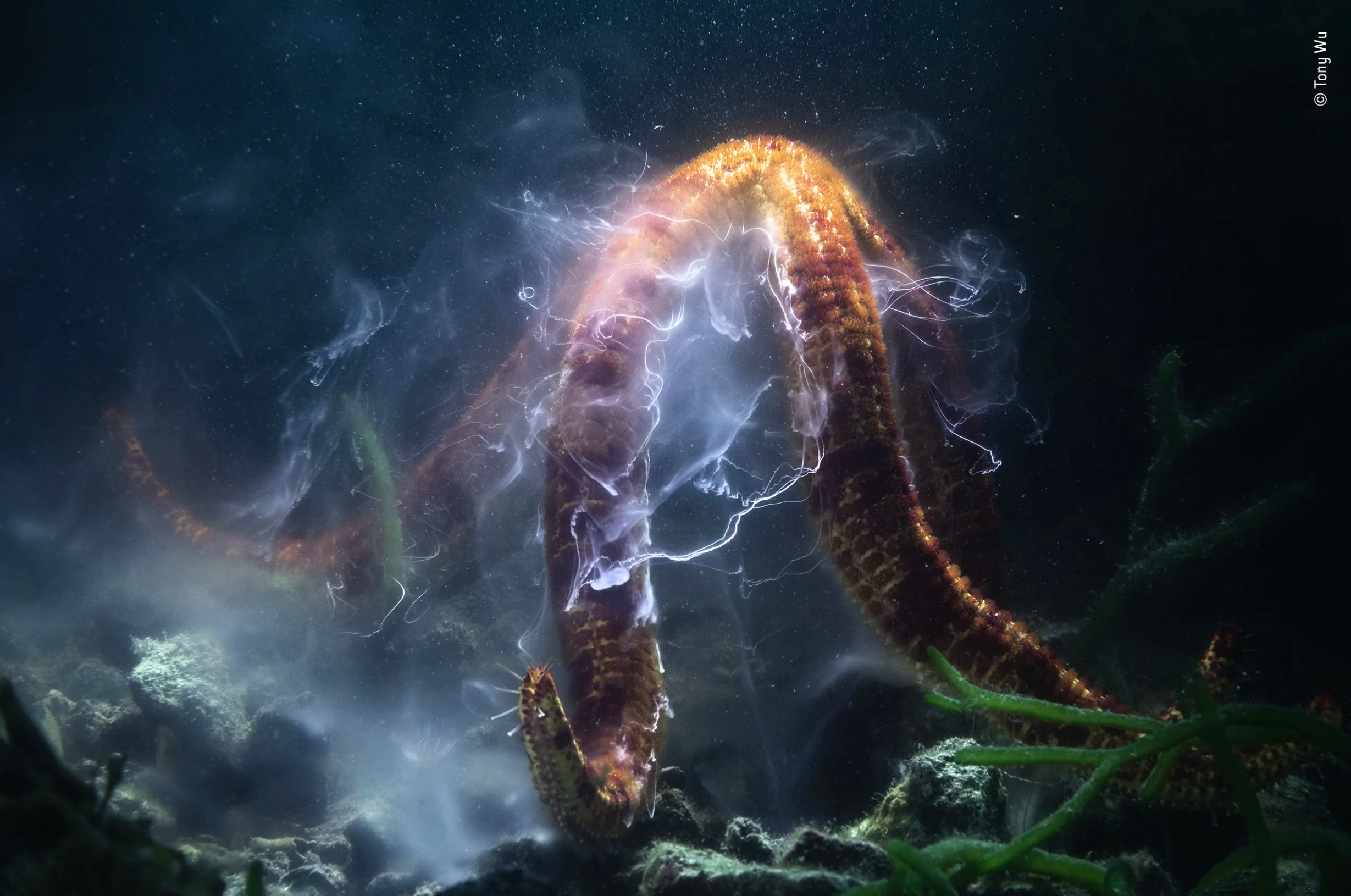 6 thoughts on “Wildlife Photographer of the Year”