Today we have another science-and-photo lesson from Athayde Tonhasca Júnior, whose captions are indented. I still have all the readers’ photos sent before, so don’t worry—yours will show up eventually. (I’m back in Chicago, but very fatigued.)

J.K. Rowling and allies are battling hard against the Twitter mob, rabid activists and grovelling, dishonest academics to prevent women replaced with ‘birthing people’ or ‘individuals with a cervix’, and having their spaces encroached by penis-dangling non-birthing people. But at least female Homo sapiens don’t have bacteria as their enemies.

Bacteria are single-cell organisms found practically everywhere on the planet: your body alone harbours millions of them, mostly living quietly on your skin and inside your gut. But bacteria from the genus Wolbachia* have a specific niche: they spend their lives inside the cells of insects and other arthropods and are transmitted exclusively through the female germline—the cells that pass on their genetic material to the progeny.

*Insect-living Wolbachia comprise ten phylogenetic groups, and there’s no consensus as to whether they are lineages or species. So they are usually considered collectively: Wolbachia. The green dots show Wolbachia distribution in the tissues of some invertebrates © Pietri et al., 2016. MicrobiologyOpen 5: 923–936. 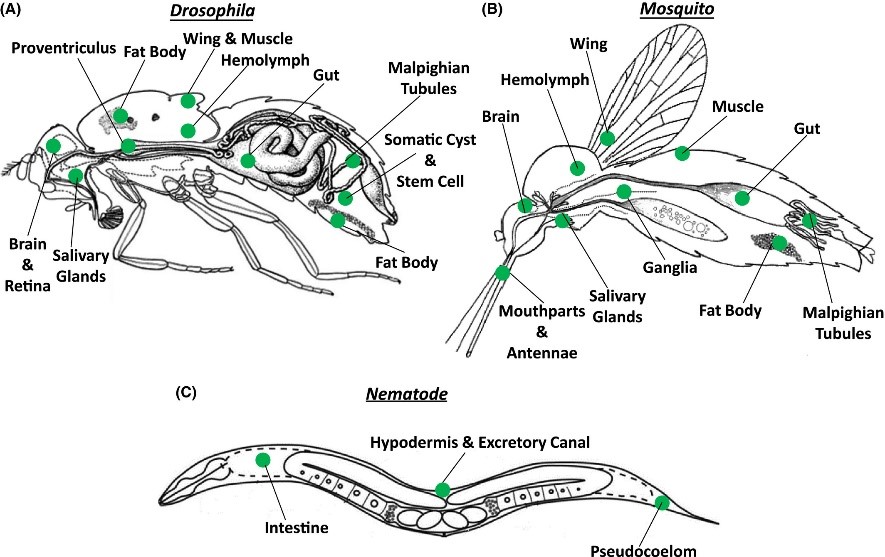 That’s a good strategy for those bacteria living inside a female host because they are transferred to her offspring via the eggs’ nutritious and protected cyto­plasm (the gooey solution that fills each cell). But bacteria in a male host are virtually doomed: they have little chance of being transmitted because sperm cells have almost no cytoplasm. For the Wolbachia‘s perspective, male hosts are a dangerous prospective. But these bacteria deal ruthlessly and efficiently with the problem: they make males irrelevant, or just get rid of them. 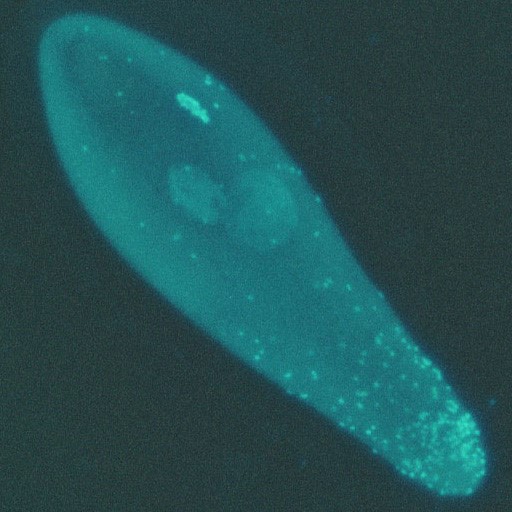 For some flies, beetles, wasps, moths, mites and isopods (woodlice relatives), Wolbachia-infected males mating with uninfected females are incapable of reproducing because the bacteria interferes with the paternal chromosomes, resulting in embryonic death. Mating with females carrying the same Wolbachia strain is not affected. The consequence is that Wolbachia-free females have lower chances of reproduction, while infected females can spread the bacteria through the population. This process, known as cytoplasmic incompatibility, is the most common effect of Wolbachia.

But there’s more. For some butterflies, true bugs (Hemiptera) and isopods, the bacteria turn genetic males into infertile or functional females by inhibiting the production of hormones that trigger the development of male sexual characteristics, a process known as feminisation. Interestingly, feminisation can be ‘cured’ by antibiotics that kill Wolbachia (e.g., Narita et al., 2007. Applied and Environmental Microbiology 73: 4332–4341).

Wolbachia’s cunning has no end: they take advantage of the reproductive system of Hymenoptera (bees, wasps and ants), where fertilized eggs contain two pairs of chromosomes and develop into females, whereas non-fertilized eggs contain one copy of each chromosome and develop into males. In some parasitic wasps, the number of chromosomes doubles in infected male egg cells. So voila, those eggs develop into females that reproduce asexually, giving origin to a new generation of infected female clones that can pass on the bacteria. And just like feminisation, asexuality can be ‘cured’ by treating wasps with antibiotics or heat, which kills the bacteria. In the laboratory, antibiotic ministrations over several generations induces wasp populations to revert to a sexually reproductive mode (e.g., Stouthamer et al., 1990. Proceedings of the National Academy of Sciences 87: 2424-2427).

A tiny Trichogramma dendroliti wasp laying eggs inside a moth egg. Some species in the genus are entirely female © Victor Fursov, Wikimedia Commons. 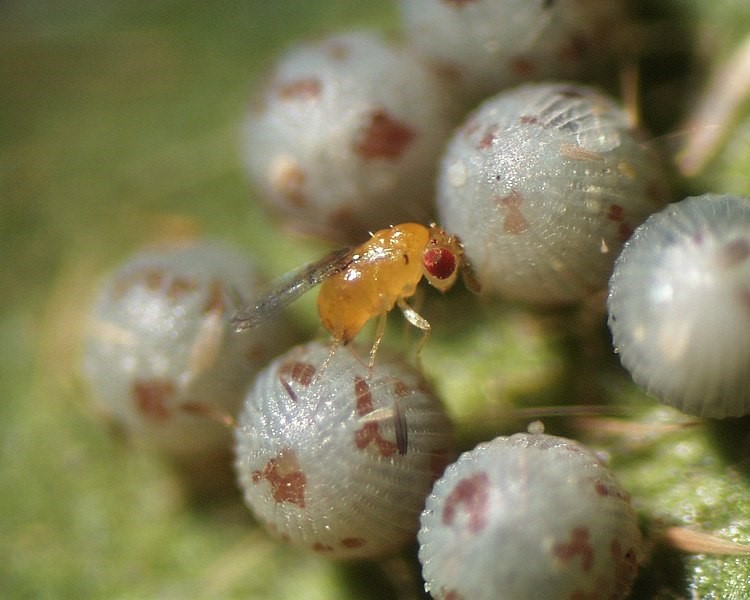 Last but not least, Wolbachia may resort to outright homicide: infected males of some beetles and butterflies are killed during embryonic or larval stages, resulting in populations heavily skewed towards females.

The mechanisms used by Wolbachia to manipulate their hosts remain largely unknown and speculative, even though this is a hot research topic. By whatever device, Wolbachia take control of their hosts’ reproduction for their own benefit, so they spread quickly throughout the population wherever they are introduced. [JAC: This manipulation of hosts is can be seen as an “extended phenotype” of the bacteria.]

That male-hating feeling: populations of the two-spot ladybird (Adalia bipunctata) and the Asian corn borer (Ostrinia furnacalis) are overwhelmingly females because most males are killed and feminised, respectively, by Wolbachia © Entomart (L) and Kembangraps, Wikimedia Commons. 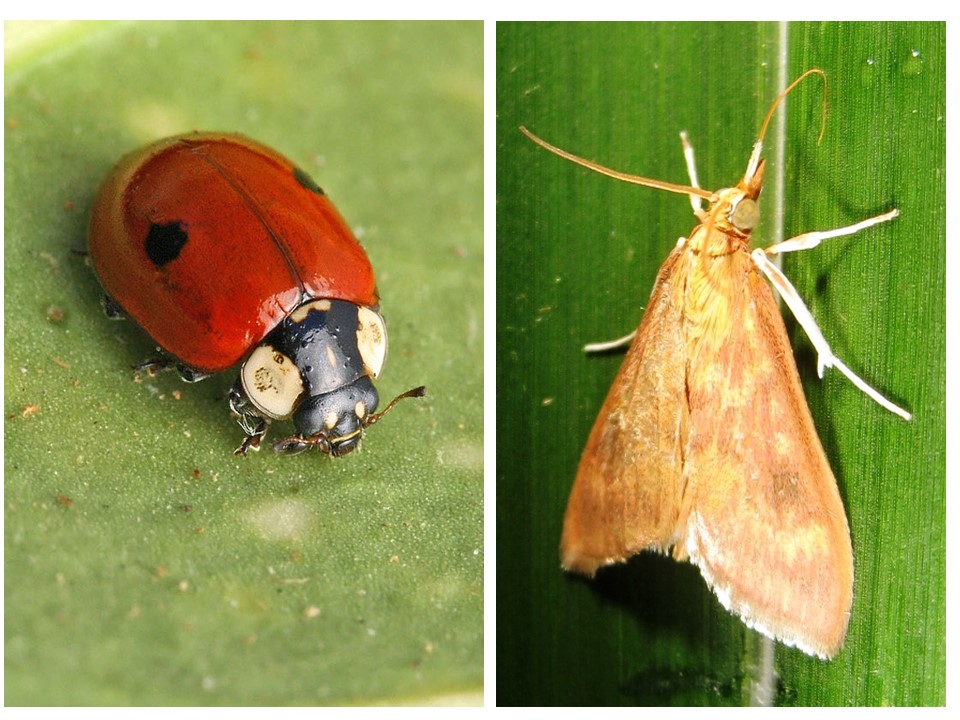 You may think that such male-bashing shenanigans are oddities; but you would be wrong. It is estimated that 40 to 60% of all arthropod species are infected by Wolbachia. These are remarkable numbers, considering that these bacteria were unknown until 1924 when Wolbachia pipientis was first identified. And they are only one of the many microorganisms causing sexual aberrations in insects.

These facts and figures sound alarming; could Wolbachia be a risk to invertebrates? Highly distorted sex ratios could threaten populations or even whole species. But data from a variety of studies suggest that these bacteria are symbionts, that is, they have established a close and sustained relationship with their hosts. And as improbable as it sounds, these female chauvinistic bacteria can be good: there are instances of increased fertility, fitness and resistance against certain viruses in Wolbachia-infected hosts. Wolbachia may even be a factor in insect speciation (when populations evolve to become distinct species). If two populations become infected with different types of Wolbachia, males from either population may be unable to fertilize females from the other; with time, these two populations split into different species (Campbell et al., 1994. Insect Molecular Biology 2: 225-237).

The effects of these bacteria on their hosts have been used for our benefit. Viruses like dengue, Zika, chikungunya and yellow fever have hard times multiplying inside Aedes aegypti mosquitoes infected with Wolbachia. So researchers and mosquito control organisations are breeding Wolbachia-carrying mosquitoes and releasing them into areas of mosquito-borne diseases. Tests with modified mosquitoes have shown significant reductions of dengue incidence in Singapore, Brazil, and Indonesia. The potential for the management or control of other pests is enormous.

When infected male Aedes aegypti mosquitoes mate with wild females that are Wolbachia-free; their eggs will not hatch © Singapore National Environment Agency.

Considering the prevalence of Wolbachia, one would not expect pollinators to go unscathed. Indeed, honey bees, bumble bees, several solitary bees, wasps and hoverflies harbour the bacteria. Data for these groups are still scarce, but 66% of Germany’s native bees may be infected (Gerth et al., 2011. Systematics and Biodiversity 9: 319-327). We have the vaguest understanding about the implications of Wolbachia infections for pollinators, but we can assume they are susceptible to the same effects found in other invertebrates, i.e., cytoplasmic incompatibility, feminization, induced parthenogenesis and male killing. So many characteristics of our pollinating species such as sex ratios, biology, ecology, behaviour, distribution and phylogeny (their evolutionary history) could have been shaped or at least influenced by some bacteria whose workings we are just beginning to understand. Wolbachia is a good example of the vast area of known unknowns in the field of natural sciences.

A female Nasonia parasitic wasp. © M.E. Clark, Wikimedia Commons. The American species N. giraulti and N. longicornis infected with Wolbachia cannot breed with each other, but when both species were treated with antibiotics, interspecies mating produced hybrid offspring. This result suggests incipient speciation: reproductive isolation is already apparent, while genetic barriers have not yet been formed (Bordenstein et al., 2011. Nature 409: 707-710) 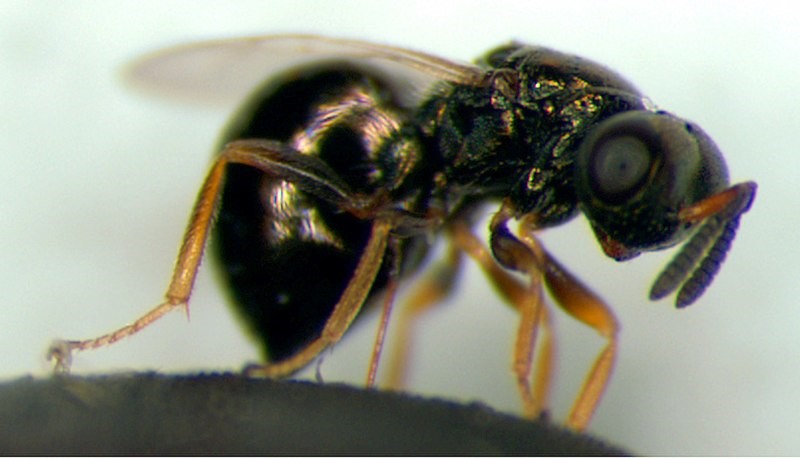