Here’s a new contribution from Athayde Tonhasca Júnior, involving one of his favorite topics: the interaction between plants and insects. His text and IDs are indented, and you can enlarge his photos by clicking on them.

A stinking trap and a cosy hideout

In a shady spot in a woodland somewhere in Britain, a lords-and-ladies (Arum maculatum) blooms. This plant is the only common British species of the mostly tropical family Araceae, so its flowering is nothing like what we would expect for a typical woodland dweller. Anytime from April to May, the lords-and-ladies produces a pointed shoot that unfurls into a poker-shaped structure called a spadix, enveloped by a hood-like membranous bract known as a spathe. The small flowers are clustered at the base of the spadix, hidden from sight. They are arranged as a ring of female flowers at the bottom and a ring of male flowers above. 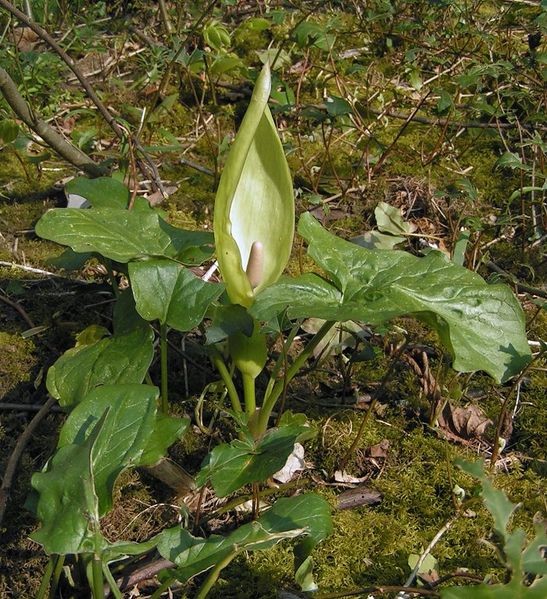 From left to right: a fruiting stem, spadix and spathe, the spadix ringed with male and female flowers, and a tuber © M. Burnett, c. 1853, Wellcome Collection. 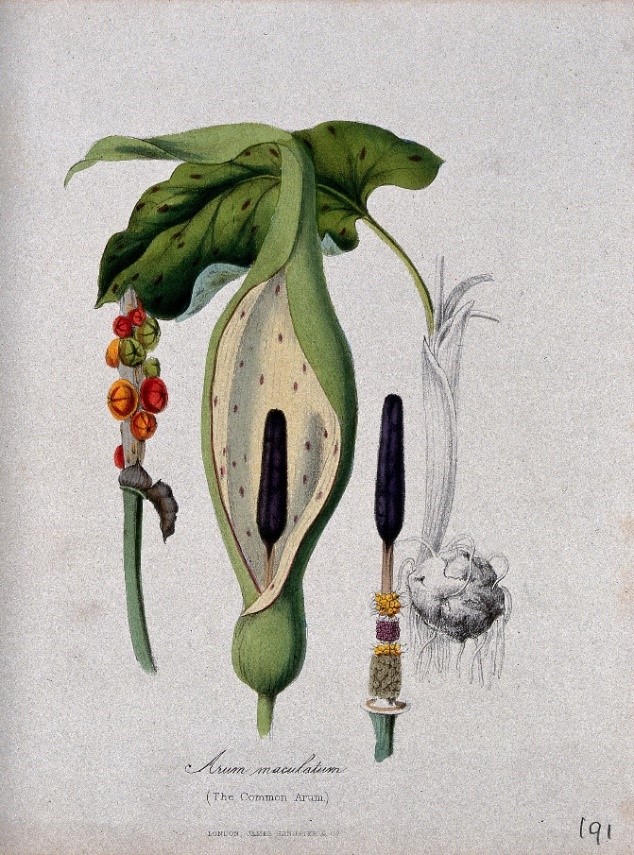 Spadices and spathes are typical of Araceae, the arum lilies or aroids. This morphological arrangement has enticed comparisons with certain parts of the mammalian anatomy, so Arum maculatum has been christened with colourful and suggestive names such as cows-and-bulls, stallions-and-mares, devils-and-angels, Adam-and-Eve, soldiers’-diddies, willy-lily, cuckoo pint and priest’s pintle (the meanings of old-English ‘pint’ and ‘pintle’ can be found by a quick etymological investigation). But the plant has inspired the pious as well, who preferred names such as friar’s-cowl, Jack-in-the-pulpit, or parson-and-clerk. Peter Law and Lynden Swift have written interesting pieces on lords-and-ladies’ historical aspects, including its many names, uses in popular medicine, and as a source of starch for stiffening medieval ruffs and beards.

Once the female flowers are mature and receptive, they start producing a scent whose dispersal is helped by the heat generated by the spadix. This biochemical process, known as thermogenesis, can heat the inflorescence up to 15 °C above the ambient temperature. Sharon Robinson, from the University of Wollongong (Australia), explains thermogenesis in the video “Heat of the night”.

Below: Inflorescence of Philodendron melinonii photographed at about 19:00 h for the visible and infrared spectra © Seymour & Gibernau, 2008. Journal of Experimental Botany 59: 1353-1362. 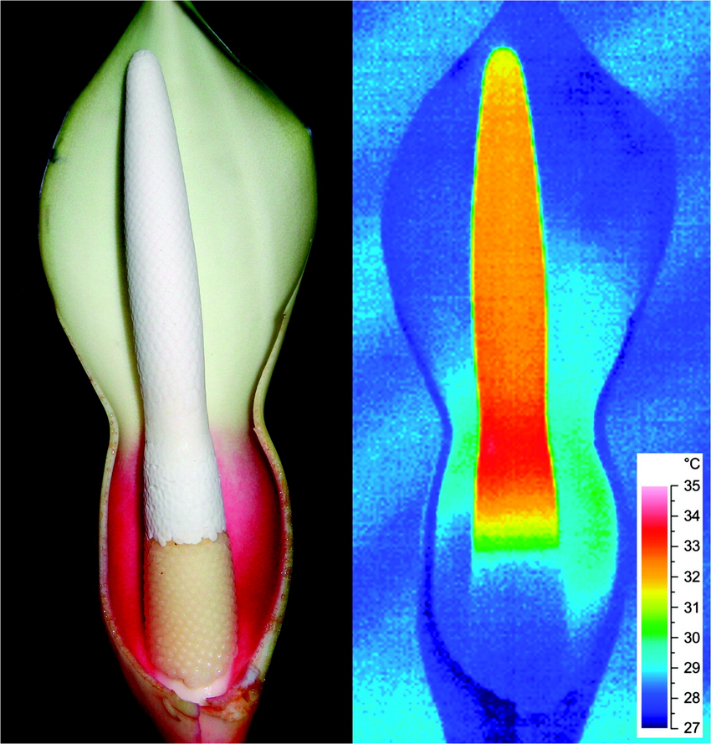 Smell and warmth are irresistible lures to one particular customer: a female “drain fly”, Psychoda phalaenoides. This is one of the 3,000 or so described species of midge in the family Psychodidae. They are small flies (2-4 mm wingspan) covered in ‘hairs’ (actually hair-like scales). They are usually found in damp woods or near stagnant water, including drains and sewers, which are ideal places for egg laying and for their larvae to feed. Their appearance and habits explain their common names: owl midges, moth flies, drain flies or sewer flies. In warm countries, some of the 1,000 or so members of the sub-family Phlebotominae, the sand flies, feed on blood and can be vectors of diseases such as leishmaniasis. But sewer flies don’t bite—some of them don’t even feed in the adult phase. They are sometimes considered a nuisance because of their numbers. 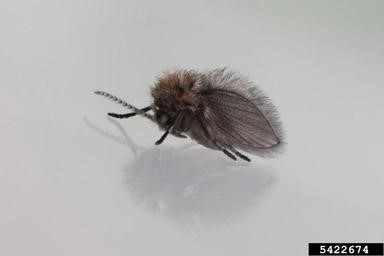 One would expect that a creature dubbed ‘drain fly’ or ‘sewer fly’ would not be interested in run-of-the-mill, flowery scents. Indeed, botanist Cecil T. Prime, who wrote a whole book about the plant (Lords and Ladies, 1960), described the aroma of its flowers as ‘foul and urinous’. That’s understandable; the scent contains chemicals such as 2-heptanone and p-cresol, which are also found in one of the fly’s favourite breeding sites – cow dung. So lords-and-ladies flowers are just irresistible to female P. phalaenoides (it’s not clear why only females are interested). The release of scents mimicking decaying organic matter to attract flies and beetles searching for oviposition sites or food is known as sapromyiophily. Besides Araceae, this type of deceitful attraction occurs in the birthwort (Aristolochiaceae), milkweed (Asclepiadaceae) and orchid (Orchidaceae) families. By the way, it’s only our human prejudice that leads us to believe that flower scents must be ‘nice’: a plant produces whatever smell it takes to bring in the right pollinator. 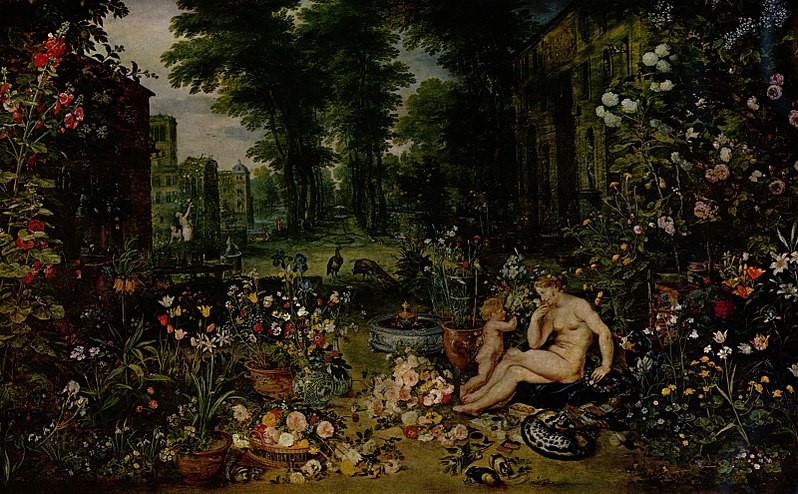 A female midge alights on the spadix, crawls downwards through a ring of ‘hairs’ (modified sterile male flowers) and reaches a smooth-walled floral chamber at the base of the structure. She’d better like it there, because she will stay for a while: she’s trapped. 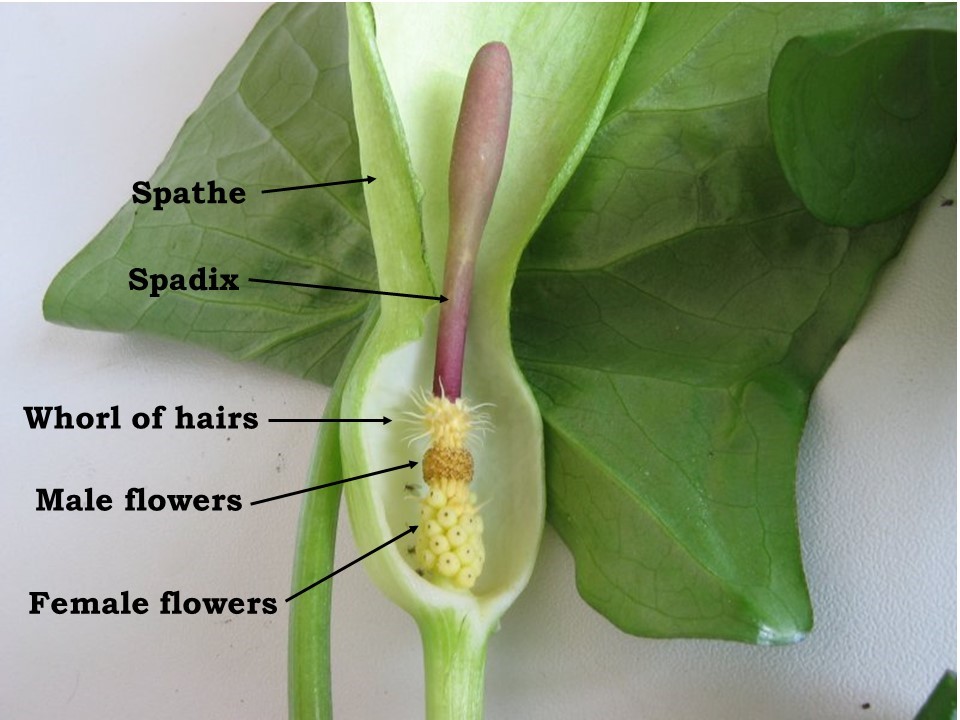 Because of the tangle of hairs and slick walls, the midge cannot crawl back out of the floral chamber. But that’s not too bad: while confined, she can feed on nutritious secretions produced by the female flowers at the base of the spadix. From the plant’s point of view, incarceration is vital. The midge may have pollen attached to her body from previously visited lords-and-ladies; while she wanders around the chamber for 18 to 24 hours, there’s a good chance some of these pollen grains will be deposited on the receptive stigmas.

Hours go by, and things start to change. The male flowers, located higher on the spadix, begin releasing pollen, which rains on the entrapped midge. By next day, the female flowers no longer discharge scent or secrete food, the spadix stops producing heat, and the hairs wilt. Now the pollen-laden midge is allowed to leave. Alas, freedom is ephemeral: the escaped fly is soon attracted to another inflorescence, and the process is repeated. Cross-pollination ensues.

This type of plant-insect relationship involving coercive detention is known as entrapment pollination, and it’s one of the oldest pollination systems. Nymphaeales (the order consisting of water lilies and other plants) and beetles have been playing this game for approximately 90 million years, and it has worked nicely for both gaolers and gaoled.

Psychoda phalaenoides is the only known pollinator of lords-and-ladies in Britain, but other drain flies, fungus gnats (Sciaridae), non-biting midges (Chironomidae) and small dung flies (Sphaeroceridae) pollinate this plant and other Arum spp. elsewhere. And there’s so much more to be discovered: Gfrerer et al. (Frontiers in Plant Science 12: 719092, 2021) recorded 289 lords-and-ladies floral volatiles from different plant populations in continental Europe, the highest figure ever found in a single plant species. This diversity of scents probably reflects the requirements of an equally diverse fauna, one that is not normally associated with pollination: the non-syrphid Diptera, that is, flies other than hoverflies—”the forgotten flies” (Orford et al., 2015. Proceedings of the Royal Society B 282: 20142934).

As we learn more about these and other seemingly drab insects and their intricate relations with plants, we may start showing them greater appreciation. Even to the humble drain flies.

Below: the Solomon’s lily (Arum palaestinum) has been used for millennia as food and medicine by Middle Eastern Arabs, Palestinians and Jews © Seán A. O’Hara. Its floral scent resembles that of fermenting fruit or wine and attracts fruit flies (Drosophila spp.) © Aka, Wikimedia Commons. 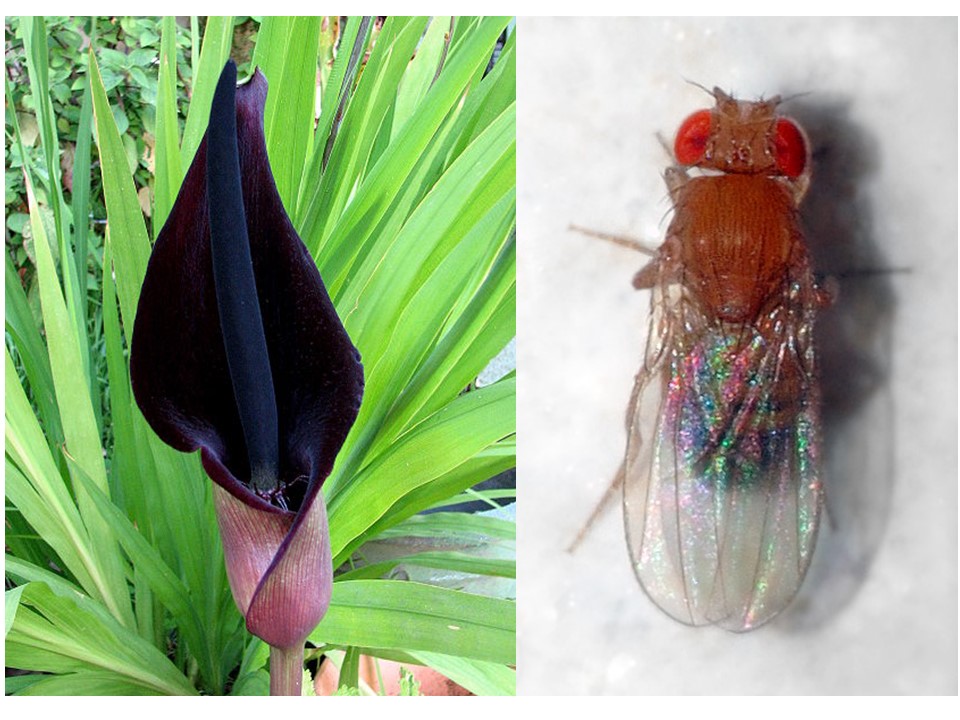