UPDATE:  CNN has just reported on the situation, with students reported being beaten, gassed, shot (with what, though?) and arrested. And why the students were in the parking garage is still unclear. But it does seem that they were driven back into the University by security forces. A quote from one student:

“It started with the students refusing to go to class. And then the (professor) of science came to talk to them because they were chanting stuff… the students were led out by the security forces of the university, and they were then stopped by Sepahs (IRGC forces), wearing normal people’s clothing,” Farid told CNN.

“They told them that ‘if you go near the subway station, we will start shooting, go back to the university.’ And then after half of the students got back into the university, they let the others into the parking lot. And after that, they started shooting them with paint balls and taking them into custody in a very, very savage way,” he added.

It’s true that the “MSM” (mainstream media) has been covering the trouble in Iran, which began when the “morality police” apparently beat 22-year-old Mahsa Amini to death after she was apprehended for having an incorrectly positioned hijab. This has touched off protests throughout the country as repressed anger at the theocracy finally reached the boiling point (I see Amini as the George Floyd of Iran).

But for the latest news you have to go to the overseas Anglophone sources, like the British media, or to Twitter, with the latter sometimes being hard to confirm—as in this case.

What I’m posting about now is a battle between students and government riot police at Sharif University of Technology, a high-class technical school nicknamed “the MIT of Iran” (it was formerly called Aryamehr University of Technology and then Tehran University of Technology.before it was renamed for a Mujahedin). It’s long been a center of protest, which has now erupted into outright battle, as recounted below by the Guardian, the BBC, and Sky News (click on screenshots). I received an email from a correspondent who argues that the University’s President lured the students into a parking garage so that they they could be rounded up by police and arrested—or even shot. (See below). 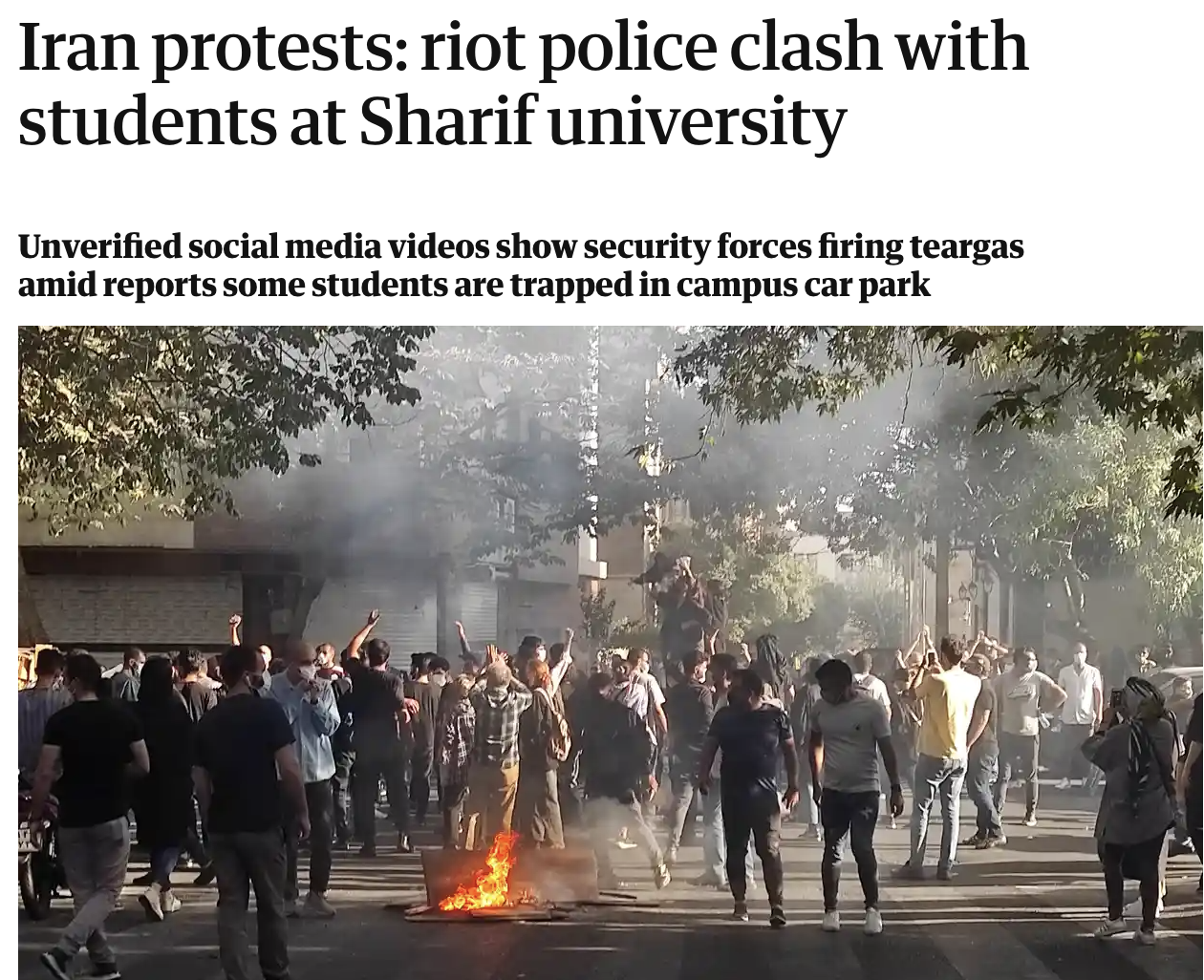 One of the videos showed security forces firing teargas to drive the students off the campus and the sound of what appeared to be shooting at a distance could be heard.

Iranian state media described “reports of clashes” at the university and said the country’s science minister visited the campus to check on the situation.

Reuters could not independently verify the events at the university.

Students had been protesting at numerous universities on Sunday and demonstrations were held in several cities such as Tehran, Yazd, Kermanshah, Sanandaj, Shiraz and Mashhad, with participants chanting “independence, freedom, death to Khamenei,” earlier social media posts 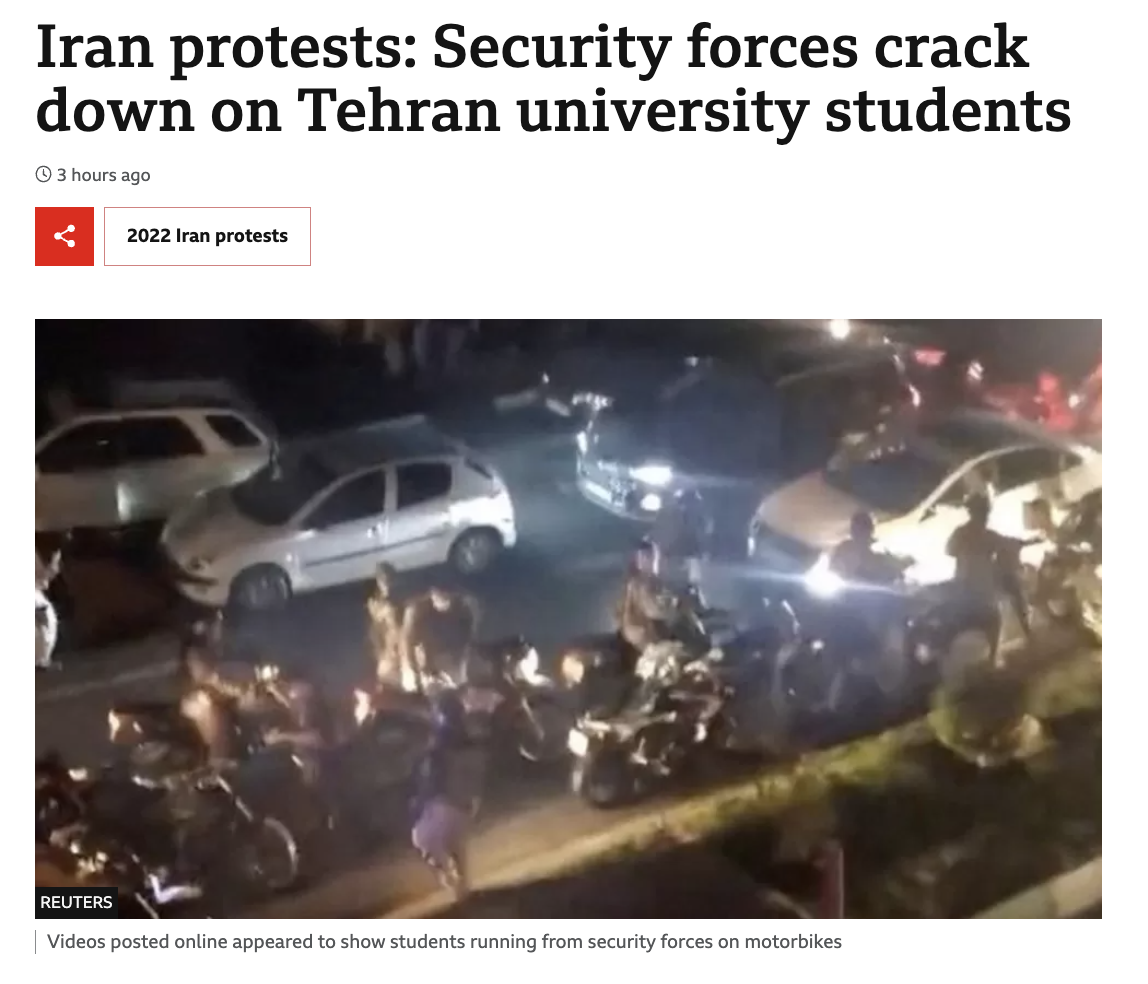 From the BBC Report:

Iranian police have cracked down on students at a prestigious university in Tehran, as anti-government protests continue to sweep the country.

Reports said a large number of students at Sharif University of Technology were trapped in a car park that had been surrounded by security personnel.

One video appeared to show students running away as gunshots ring out.

. . .Sunday was the first day of term for first-year students attending Sharif University of Technology.

The semi-official Mehr news agency reported that about 200 students gathered at the campus on Sunday afternoon and began chanting slogans including “woman, life, freedom” and “students prefer death to humiliation”. As the demonstration continued, the slogans became more radical and directed against the clerical establishment, it said.

The violence erupted in the late afternoon, when security forces arrived at the campus. Mehr reported that security personnel fired tear gas and paintballs, causing some of the students to flee to one of the university’s car parks.

Another appears to show people running as motorcyclists advance along a street. Gunshots can be heard, as well as chants of “death to Khamenei”.

The US-based Center for Human Rights in Iran said a third video showed a “detained protester being carted away with [their] entire head wrapped in clothing” by two security personnel on a motorbike, one of whom then opens fire at the woman filming.

Reports said a number of students were beaten or shot with pullet guns, and that 30 to 40 were arrested.

In one video posted on social media, a group of people are seen trying to escape through a car park while being pursued by security forces on motorbikes.

The fleeing from the car park, the firing of paintballs, and the detained protestor are all shown in the tweets at bottom, as well as in the Sky News video linked below:

I’ll ask you to judge these scenes for yourself, as there’s mass confusion. What’s clear is that the students are running away from something:

As Students of Sharif University in Tehran brave protest this regime, security forces are seen using guns directly aimed at killing them. The world needs to see these scenes. This is how Iranians are endangering their lives for freedom. #مهسا_امینی

Another scene from the parking garage:

The “shooting” in this video is said to be a paintball, not bullets. The detainee in the middle on the motorbike has his head wrapped.

World needs to wake up and see the true brutal nature of I.R. of Iran regime. NAJA shooting at the person who is sitting in her car and filming them while taking a protestor away by a bike (Univesity of Sharif)#MahsaAmini#OpIran
# IranRevolution@abcnews@cnnbrk @RadioFarda_ https://t.co/bvCzpjbLWO

If you're a professor or a student in STEM in a Western country, you probably know someone from the Sharif University of Technology in Iran. They might have be your students, peers, or friends.

That university is now under attack by the Islamic Republic.

Now it’s not clear what’s happening here. My correspondent, who must remain anonymous for obvious reasons, thinks the students were lured into the parking garage. His/her email:

Yesterday, the Iranian regime trapped students at Sharif University – often called the MIT of Iran – and started shooting at them and arresting them.

The head of the university was on a US Dept of State list of people responsible for human rights abuses in Iran:

If you look on that list, you’ll see this name:

It is believed [Jalili] collaborated with the regime to bring the students on campus under the guise of having a safe place to stay amidst the protests, then unleashing the regime’s forces on them.

Now of course I can’t verify the collaborationist claim adduced here, but Wikipedia says that Rasoul Jalili is the President of Sharif University. and the State Department list does give the names of people whose visas are restricted and “whose property and interests are blocked” by the U.S. because they’re accused of engaging in human rights abuses.

Did Jalili lure the students into the parking garage so they could be rounded up, or even shot? I have no idea, but there’s no evidence to contradict it, either. I suppose we’ll find out eventually. But what’s clear is that the Iranian government is at war with the students at Sharif University, and many have been arrested.

As of three days ago, the countrywise death toll from the Iranian protests was 83, and it’s surely higher now. Does this spell the end of the theocracy? I hope so, but they and not the students are the ones with the guns and the jails. And there have been sporadic protests against the regime, but it’s still here. And that’s a damn shame, for imagine where Iran would be if it had a more democratic government, one not infused with medieval theology.