Readers’ wildlife will be postponed until tomorrow so that we can see astronomical “wildlife.”

Once again our faithful space-exploration reporter, Jim “Bat” Batterson, found some new photos of the DART impact on the asteroid Dimorphos, an attempt to knock the small asteroid out of its normal orbit around its larger companion asteroid, Didymos. This was, of course, a practice to see if we could perturb the course of a future celestial body that actually might hit the Earth. The impact was on target, but we don’t yet know whether we perturbed its orbit in the expected way.

Here’s a photo from Wikipedia of Dimorphos taken from the DART spacecraft moments before impact. It’s a pile of rubble! The diameter is 170 meters, or 560 feet. 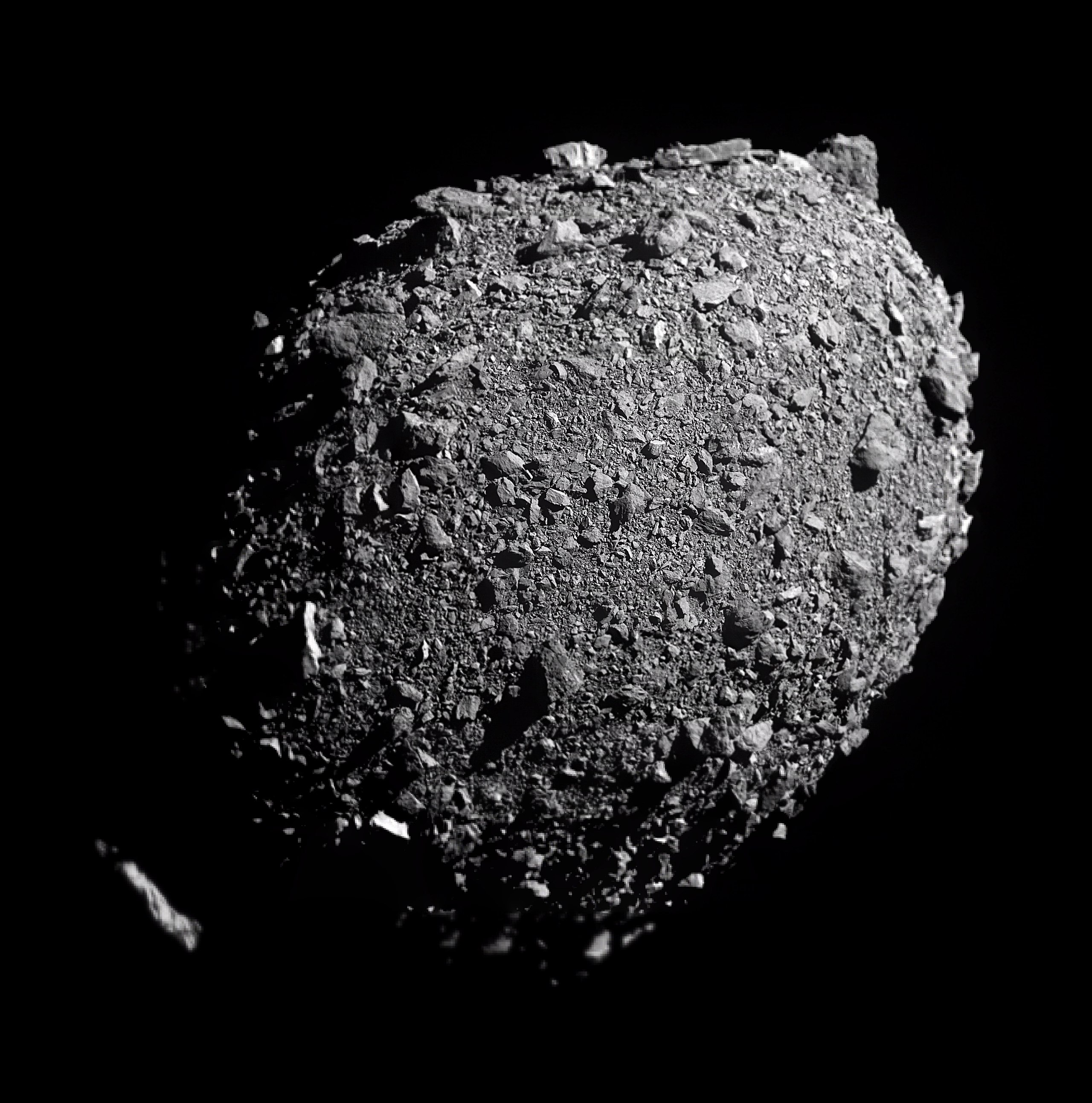 And Jim sent this:

The first NASA-released images from the small companion craft are at https://www.nasa.gov/feature/first-images-from-italian-space-agency-s-liciacube-satellite

The rubble really blasted out!  Because of small gravitational field of the impacted asteroid, I imagine that some of the debris may form a ring around the larger one, some might have escape velocity from the system itself and just continue in orbit around the sun, and of course some may slowly drift down back onto Dimorphos’ surface.  I hope that the engineers will hold a press conference about this and I hope that they got a picture of the impact point and crater.

But I’ll show you the NASA pictures below. They were taken by DART’s companion spacecraft, the LICIACube (from “Light Italian CubeSat for Imaging of Asteroids”), the first autonomous spacecraft developed by a wholly Italian team under the Italian space agency. It was a tiny minicraft affixed to DART with the express purpose of photographing the impact. As the Wikipedia note shows below, it separate from DART more than two weeks before impact:

After the launch, the Cubesat remained enclosed within a spring-loaded box and piggybacks with the DART spacecraft for almost the entire duration of DART’s mission. It separated on 11 September, 2022 from DART by being ejected at roughly 4 km/h (2.5 mph) relative to DART, 15 days before impact. After release, as part of the testing process to calibrate the miniature spacecraft and its cameras, LICIACube captured images of a crescent Earth and the Pleiades star cluster, also known as the Seven Sisters.

It conducted 3 orbital maneuvers for its final trajectory, which flew it past Dimorphos about 2 minutes 45 seconds after DART’s impact. That slight delay will allow LICIACube to confirm impact, observe the plume’s evolution, potentially capture images of the newly formed impact crater, and view the opposite hemisphere of Dimorphos that DART will never see, while drifting past the asteroid.

Here’s the LICIACube by itself and then affixed to the DART spacecraft (I’ve circled it in the second photo). Look how small they can make a satellite these days! 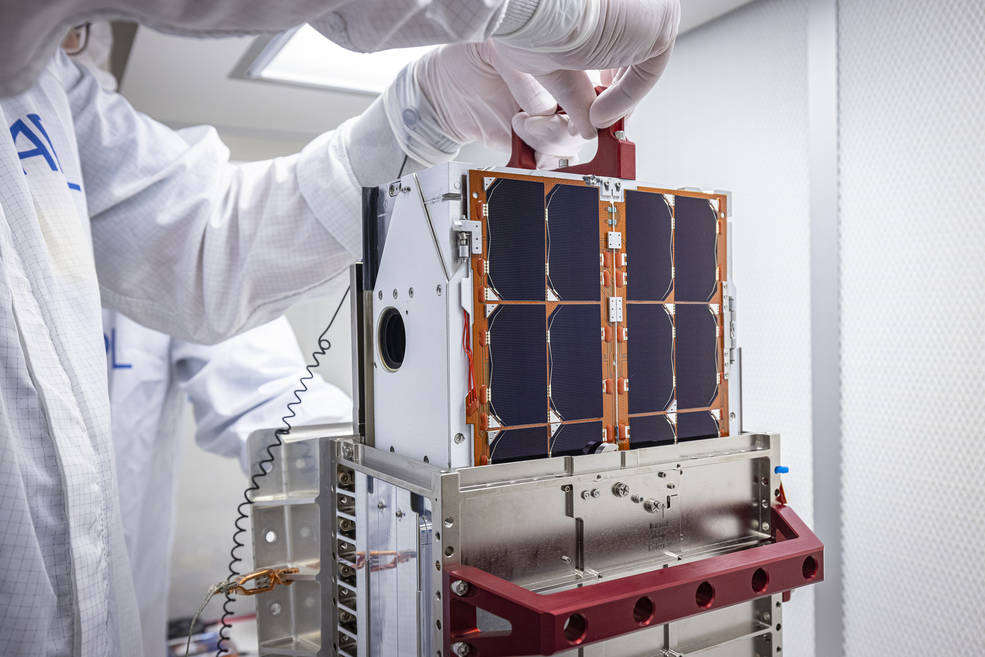 The LICACub is about 4x8x12 inches.  The cube class of vehicle (cheaper) was initiated by NASA in the 90’s, if I recall correctly, to give access to a broader class of potential users who wanted to conduct Their own space experiment.
The full DART mission itself is one of another class of “cheaper” at $300M or so compared with the more than $1B major mission to Pluto and beyond. 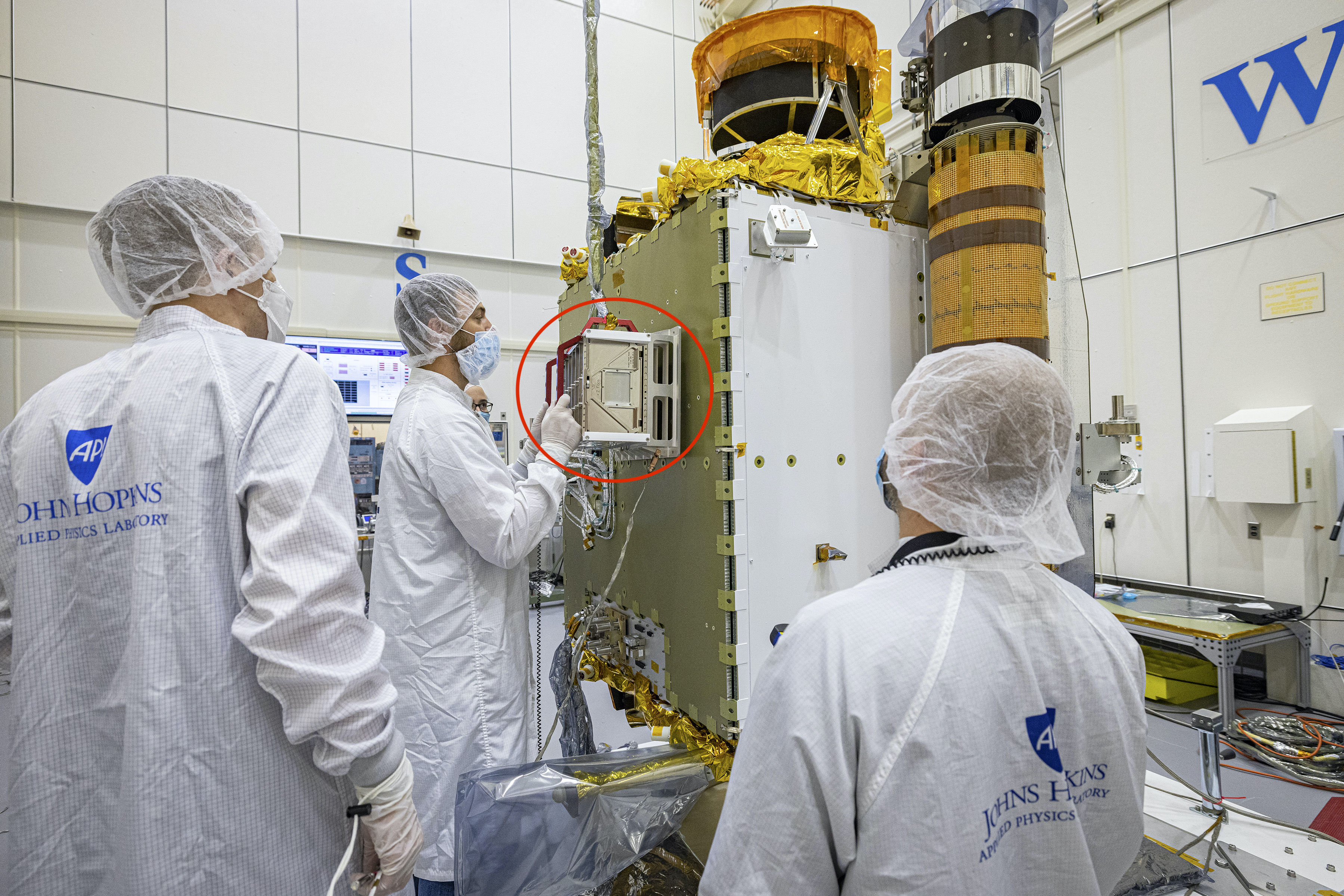 And the pictures that the cube took from NASA, with their captions (click to enlarge). They all show the dust cloud around Dimorphos after the impact:

Here, from Facebook, is a lovely video taken from a telescope on Earth showing the impact. The asteroid system, in the center of the screen is moving to the left relative to the stars in the background:

There are a few more videos and more information in this article from the NYT (click to read):

5 thoughts on “DART impact as photographed by companion craft”