In her latest sermon which the New York Times commissioned from Anglican priest Tish Harrison Warren for our edification, she describes the travails of living with a mother who has mid-stage Alzheimer’s.  I am very sad for both the Reverend and her mother: I can’t imagine watching someone you love gradually forget you, then everything else, and then slide slowly into the hinterlands of death. But then Warren manages to turn her grief into a lesson about God. (It’s assumed that we all think this god exists.) Click to read. (I have to say that the title makes me cringe.) 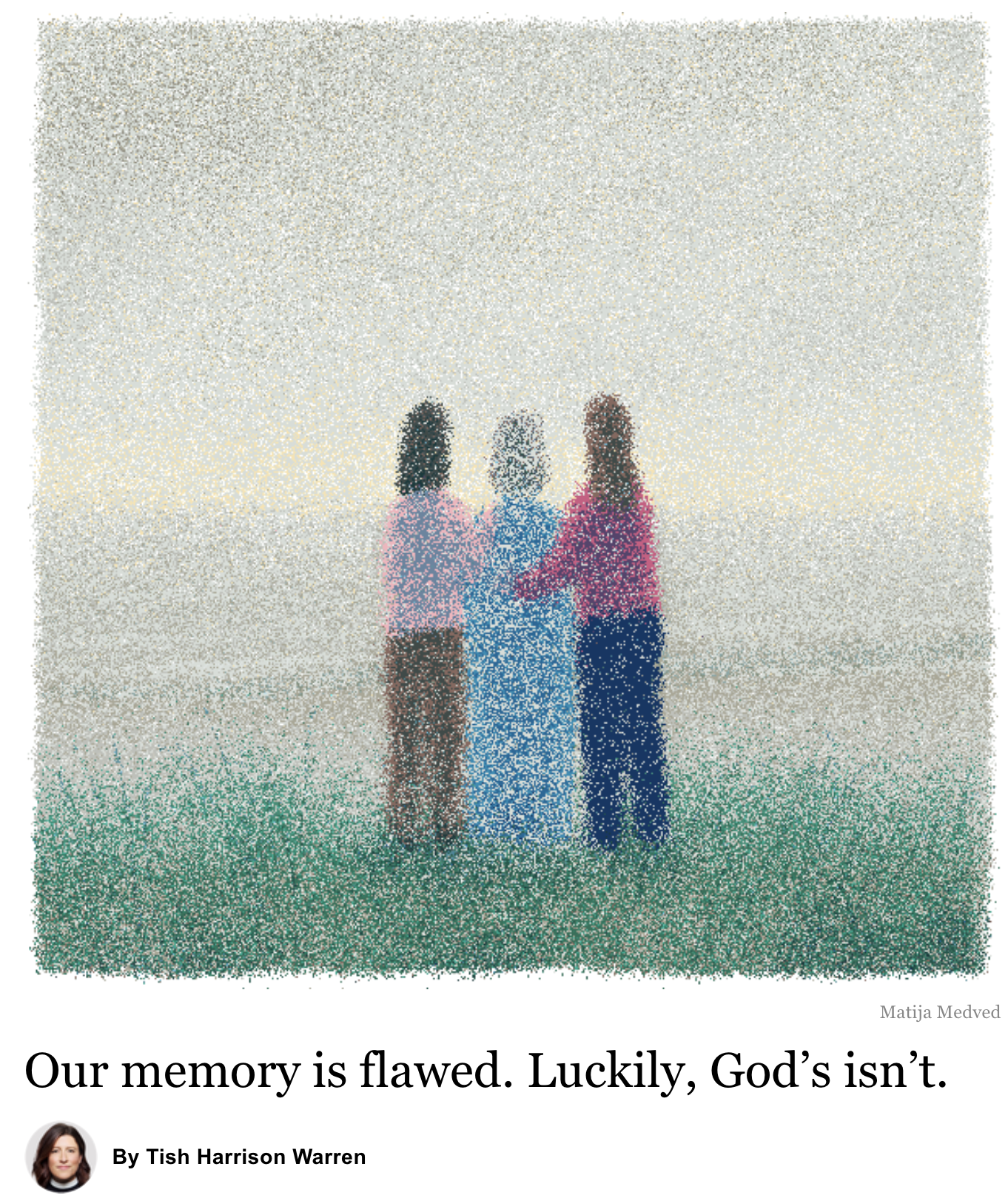 In his book on dementia, the Scottish pastor and theologian John Swinton wrote that we as a culture have a bias toward what he called “cortextualism”— a bias toward fusing our understanding of personhood with higher-order thinking and reasoning that leads us to depreciate the humanity of those not capable of typical cognition, including dementia patients.

But dementia cannot erase our inherent dignity or value. It does not erase the image of God in us. Cortextualism fails to see the intrinsic glory and beauty in each human life. It also strikes me as profoundly arrogant and self-deceived, rooted in the notion that with enough privilege, health and power, we can make ourselves strong; we can white-knuckle our way to the good life. But all of us, and every one of our strengths, are made of flimsy material.

Many of the biblical writers seem to understand that humans are innately forgetful creatures, so they constantly call us back to the hard work of recollection. In Deuteronomy, Moses urges his people, “Never forget the day when you stood before the Lord your God at Mount Sinai,” and later says, “Be careful not to forget the Lord, who rescued you from slavery in the land of Egypt.”

Even now, believers gather to worship and collectively remember the stories we live by. Each Sunday in my church, when I take the Eucharist, the priest repeats Jesus’ words: “Do this in remembrance of me.” Yet each week, through confession, we acknowledge that all of us, in the words of Isaiah, “have forgotten the God” of our salvation.

But Isaiah also tells us that while we may be forgetful, God is not. Isaiah 49 contains perhaps the most poignant statement about God’s memory. In it, God speaks: “Can a mother forget her nursing child?” The verse continues: “But even if that were possible, I would not forget you! See, I have written your name on the palms of my hands.”

My mother may eventually forget me, her daughter whom she deeply loves. But God will not forget my mother. “At the heart of God’s intimate knowing of human beings,” writes Swinton, “lies God’s remembering of us.” He explains that the scriptures suggest that all things are eternally present to God, who is outside of and unbeholden to time. For God to remember someone, then, means that they are present to God, and therefore their existence and worth are safe, fixed and undiminished.

What I find strange about this, beyond Warren’s unwavering assurance that God exists, is that she uses dementia as an example of normal forgetfulness as mentioned in the Bible. Like her her mom, we humans are both made in God’s image but also “forgetful creatures.” But her mom has a neurological illness, and what does that have to do with the Reverend’s musings on how faith constantly asks us to remember stuff? Moses’s call to the Jews to remember God has nothing—nothing—to do with her mother’s forgetfulness, and it seems to me even a bit tackhy to use a neurological illness to draw lessons about faith and about God.

At the end, Warren says that God won’t forget her mother. But what, exactly does this remembering mean?  Warren characterizes God’s remembrance as “someone being present to God,” assuring that “their existence and worth are safe, fixed, and undiminished”? Is Warren trying to say that in the afterlife her mother will be there with God? If so, why didn’t she say it.  I suspect that liberal Christians get uncomfortable being straightforward with their views on Heaven, the Resurrection, and other tenets of their faith.

Warrens train of theological reasoning seems to be this:

a. My mom has a disease that makes her forget (and will kill her eventually)

b. My mom is made in the image of God and so her worth is not diminished.

c. Even non-afflicted humans are forgetful, but the Bible reminds us not to be.

d. And even if her mom forgets, God does not, and when her mother dies, God will gather her up in the afterlife.

I suppose it’s some kind of extended simile, but it goes nowhere. The real message is this: “God exists and some day we will all be with him in heaven.” (I’d like to know if we Jews and apostates will get there, too.)

In her customary way, Reverend Warren ignores the existence of these physical evils. (She’s always shied away from the Problem of Physical Evil, the Achilles Heel of Abrahamic religion.) Why did God give her mother such a horrible disease in the first place? Now that’s something I’d like to see Warren tackle.

I suppose it’s customary for the faithful to use horrible happenings as a way to reaffirm their faith in God, but I find it sad. And I also find it incomprehensible that what is supposed to be the best newspaper in America deluges us with a Christian sermon every Sunday. Yes, my subscription dues go to pay for Ross Douthat, too, but at least I can argue about his views. Who but a petulant secular atheis would take issue with the weekly lucubrations of an Anglican priest?

14 thoughts on “Today’s sermon from Tish Harrison Warren: we may get dementia, but God always remembers us”