In this 17-minute video, physicist and science popularizer Sabine Hossenfelder discusses the concept of the multiverse, one that’s popular with many physicists (and laypeople)—but one, she says, for which there’s no evidence. (It’s also a topic of her latest book; see an excerpt here and get a link to the book below)

Reader Steve sent me the video link with the note (reproduced below with permission), referring to Sean Carroll, who’s an advocate of the multiverse.

The latest from our friend, Sabine. As much as I like and admire Sean Carroll, I am convinced by Sabine’s argument…for now.

I’m putting her new book on my reading list.

The video is pretty clear, so I’ll just give the take-home message briefly.

To Hossenfelder, the problem with mulitverse theories is that they all “Postulate the existence of unobservable entities”.  That is, although the multiverse is an outcome of some mathematical physics, there is no way physicists have found to test it—to make observations that would make its existence more or less likely.  If it ultimately can’t be tested, she says—and I agree—then it can’t be considered a scientific theory. (This is also true of string theory.)  Now we don’t know if somebody in the future will come up with a clever way to see that the universe keeps splitting into more and more universes every time something happens, but until they do, to quote Laplace, “we have no need of that hypothesis.” I’m glad, however, if some physicists are working on a way to test it. However, Hossenfelder says that there is no observation even in principle, that physicists can make to test the existence of the multiverse. That may change. And of course a failure to find ways to detect multiverses does not mean that they do not exist, of course. Like the idea of an unobservable God, we simply can have no confidence in their existence.

Hossenfelder then considers whether the multiverse theory is science, religion, or pseudoscience. She’s already dismissed science, but argues that the theory either pseudoscience or religion, depending on how you use it. One quote:

“If you assume that unobservable universes exist, and write papers about them, then that’s pseudoscience. Because this is exactly what we mean by “pseudoscience”—pretends to be science, but isn’t. If you accept that science doesn’t say anything about the existence of those universes, one way or another, and you just decide to believe in them, then that’s religion. Either way, multiverses are not science—they’re like Tinker Bell, basically: they exist if you believe in them.

Hossenfelder thinks that the fundamental error that physicists have made is thinking that multiverses exist because they’re an outcome of mathematical physics.  In other words, “The big problem with the multiverse idea is that physicists are confusing mathematics for reality.”

Finally, she takes on four objections to her own view, but dispels all of them.

Adjudicating this argument is above my pay grade, but I do know that no physicist has found a way to test the predictions of multiverse theory. It’s still a theory widely discussed (Sean Carroll talks about it quite often, and I believe it’s discussed with approbation in his 2017 book The Big Picture). But if scientists, after arduous effort, eventually can’t see a way to find evidence to test it, it will eventually disappear as a matter for serious discourse in physics.

Hossenfelder is an excellent presenter of physics, and passionate about her views. The only flaw in her presentation is that she seems a bit nervous—or perhaps she’s just being very serious and passionate.  A more relaxed presentation would be a better one, but not a lot better.

I also like her because, as I discussed exactly two years ago, she’s a hard determinist with respect to free will. She doesn’t seem to be a compatibilist, either, though she does agree with some compatibilists in thinking we shouldn’t worry about our lack of libertarian free will.  But I don’t think she’s dug deeply enough into the consequences of rejecting “naturalism” (my new word for “determinism”. There are serious social implications, notably in the judicial sphere, to rejecting libertarian free will. Below the fold you can see some of what I wrote about her video on free will.

Wouldn’t it be lovely to see a debate between Hossenfelder and Sean Carroll (who’s a bit of a compatibilist) on the multiverse, on free will, or both?  In such a debate both sides would be smart, rational, quick, and, of course, polite. It would be a delight to watch.

Here’s Sabine’s new book (click on the screenshot to go to the Amazon site), and you can get a peek inside at that site: 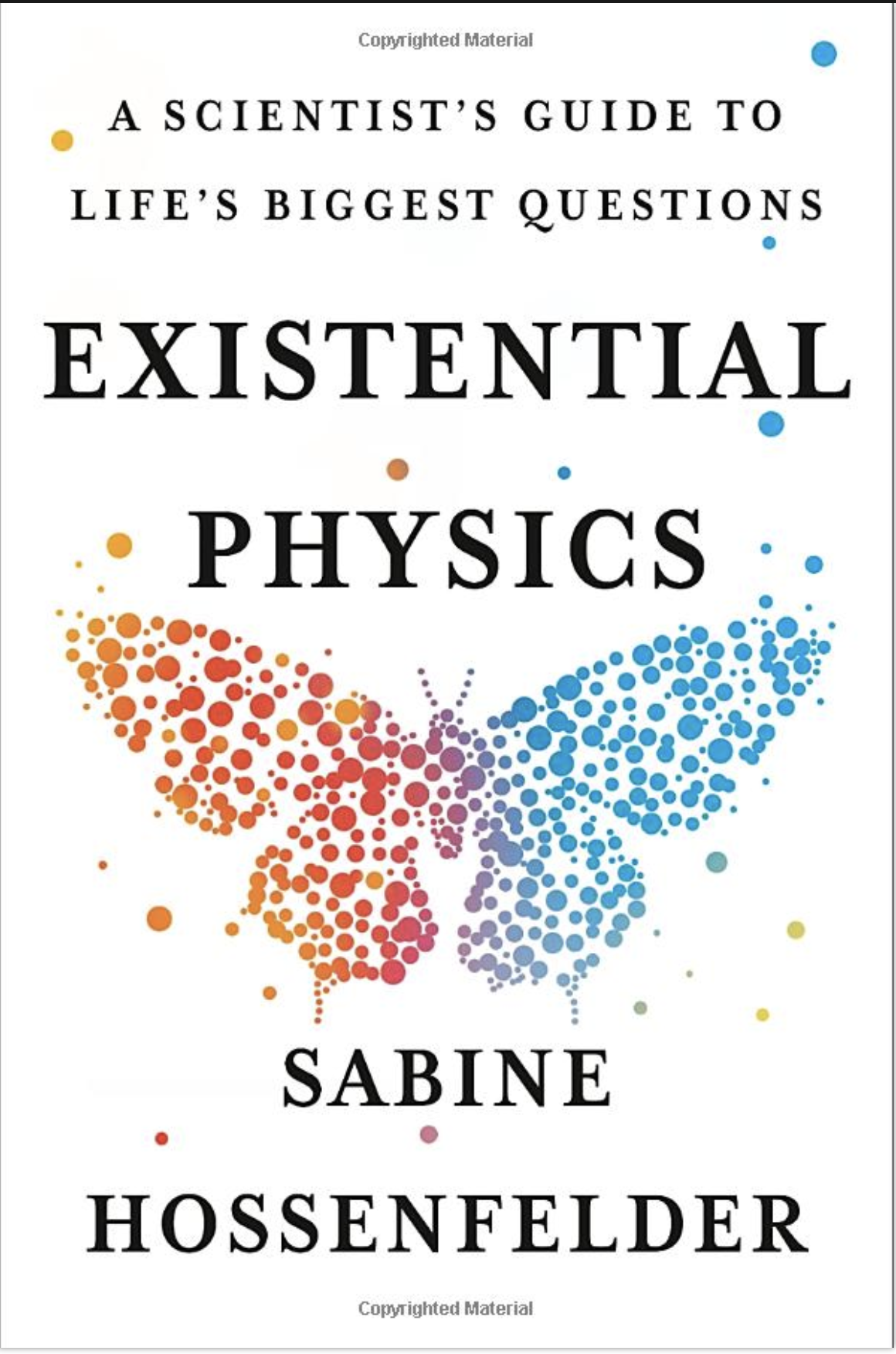 Click on “continue reading” to see some of my discussion of Hossenfelder’s take on free will.

You can go here to see her video affirming determinism, and here’s a bit of what I said about it:

Hossenfelder concludes by reiterating that free will is “nonsense” and that “the idea deserves going into the rubbish bin.”  True, that. But that doesn’t mean that we can’t be happy, for we have the illusion of free will, and we can use that as a crutch to go through life. She even suggest a psychological trick for being happy:

If it causes you cognitive dissonance to acknowledge you believe in something that doesn’t exist, I suggest that you think of your life as a story which has not yet been told. You are equipped with a thinking apparatus that you use to collect information and act on what you have learned from this. The result of that thinking is determined, but you still have to do the thinking. That’s your task. That’s why you are here. I am curious to see what will come out of your thinking, and you should be curious about it too.

Why am I telling you this? Because I think that people who do not understand that free will is an illusion underestimate how much their decisions are influenced by the information they are exposed to. After watching this video, I hope, some of you will realize that to make the best of your thinking apparatus, you need to understand how it works, and pay more attention to cognitive biases and logical fallacies.

I’m not sure how it helps to realize that “you have to still do the thinking”, when in reality the thinking is doing itself! Just because we don’t know what will happen—that our predictability is not so hot—doesn’t make us any less a bunch of meat robots who are slaves to the laws of physics. I know this, and yet I’m tolerably happy (for a lugubrious Jew). We know our “choices” are illusions, and my realization that these illusory choices come from a brain embedded in the skull of one Jerry A. Coyne does not give me the consolation Hossenfelder promises. But I still beat on, a boat against the current.

One more point: I’m not sure why compatibilists don’t just admit what Hossenfelder admits instead of trying to find a definition of free will that people do have. The physicist Sean Carroll and philosopher Dan Dennett have taken that route, which I call the “Definitional Escape” rather than Hossenfelder’s “There’s No Escape but Isn’t it Cool to Not Know what Comes Next”?

The one thing I think Hossenfelder neglects comes from her last paragraph. If we do understand that free will in the Hossenfeldian sense is illusory, that has enormous consequences for the judicial system and for how we think about people who are either more or less fortunate than we are. I won’t dilate on this as I’ve discussed it to death. But yes, realizing that our brains are particles and obey the laws of physics should cause us worry—worry about how we treat prisoners and those who are mentally ill, and worry about how some people hold others responsible for making the “wrong choices.”

That aside, I applaud Dr. Hossenfelder for realizing the truth, which, as she says, is the ineluctable outcome of science, and for saying it so straightforwardly. I’m a big fan of hers. And I applaud myself for agreeing with her.