Today’s piece comes from Athayde Tonhasca Júnior, whose captions and narrative are indented. Click on the photos to enlarge them.

Thrips, also called thunder flies or thunder bugs, are small (most species are 1-3 mm long), slender insects. Their wings are fringed, a characteristic used to name their order: Thysanoptera, from the ancient Greek thysanos (tassel or fringe) and pteron (wing) – although not all species are winged. There are around 6,000 known species, mostly from tropical and temperate regions of the world. 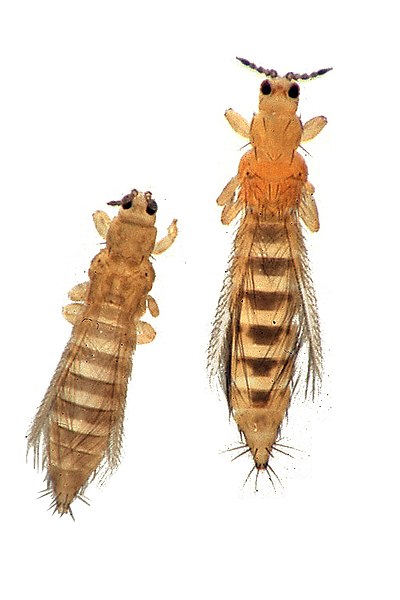 Thrips are not among the most cherished insects; if you search for them in the internet, the first pages are likely to include ‘how to get rid of’ in their titles. Indeed, many thrips species are pests of crops and vectors of plant viruses. They feed by puncturing tissue and sucking up plant juices, thus reducing yield, damaging commercial flowers and fruits, and often causing galls or leaf rolls. They are capable of parthenogenesis (reproducing without fertilisation), so in situations where natural enemies are scarce, such as in greenhouses, thrips populations may explode. Gardeners are familiar with flower thrips, which look like masses of dark specks scurrying over petals and buds. To add injury to insult, the little blighters can ‘bite’ (actually they jab with their mouthparts), causing mild skin irritation in some people.

A thrips on a finger © Daiju Azuma, Wikimedia Commons. 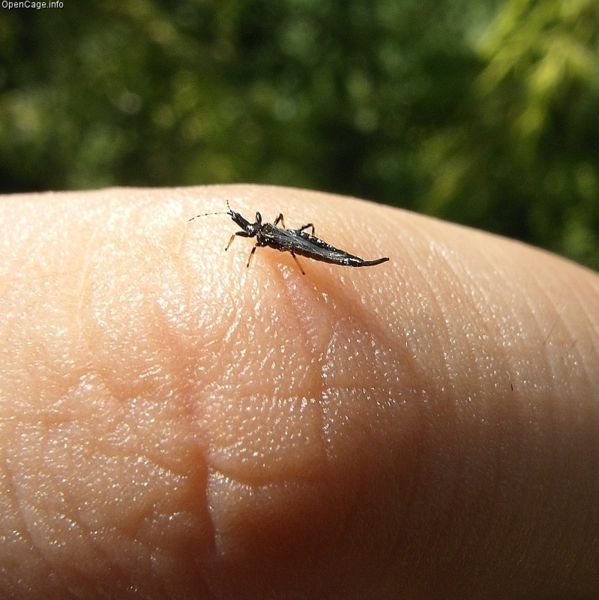 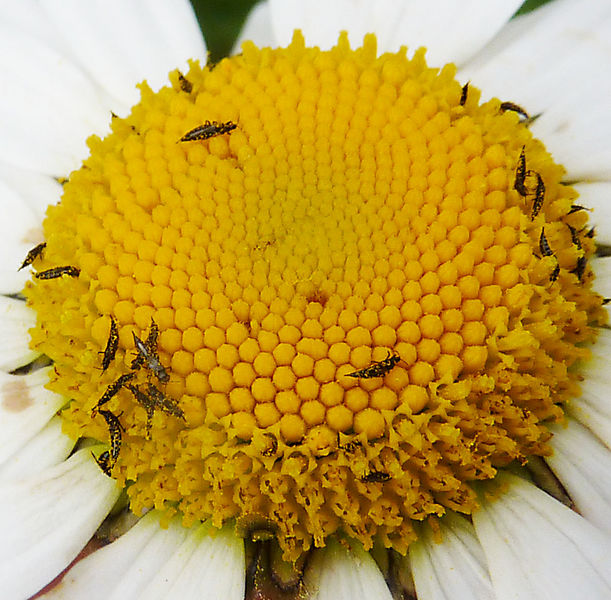 But not all thrips are bad for us. Some species are predators of other pests such as scale insects and plant mites. And because so many of them hang around flowers, it has been long thought that there’s more to their story than pollen munching. Traditionally, thrips have not been considered to be relevant pollinators because they are small, poor fliers, and have no structures adapted to carry pollen. On the other hand, they do move from flower to flower with pollen attached to them, and their large numbers may compensate for small pollen loads. When Charles Darwin was busy with his plant reproduction experiments, he noticed he couldn’t exclude thrips from his net-enclosed flowers. He pondered whether these gate crashers were cross-pollinating plants he intended to be self-fertilized (Darwin, C. 1892. The effects of cross and self- fertilization in the vegetable kingdom).

A: Pollen grains attached to a thrips’ bristles (setae); B: a closer view of the pollen clinging to the abdomen of the thrips © Eliyahu et al., 2015. Journal of Pollination Ecology 16: 64–71. 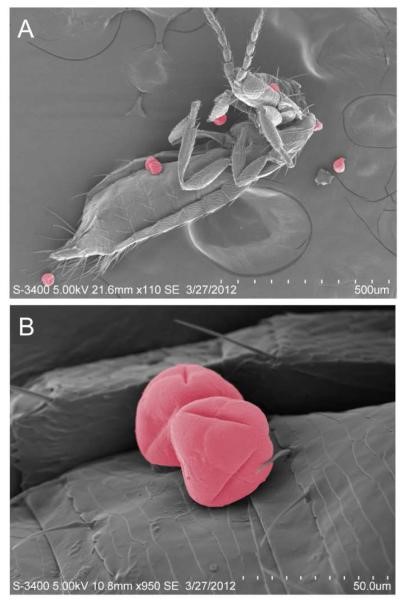 It turns out that the more researchers look into it, the more they find evidence of thrips pollination, especially for plants previously identified as wind-pollinated. Species such as the common wilkiea (Wilkiea huegeliana) and the Red List species Brazilian walnut (Ocotea porosa) from the Australian and Brazilian rainforests, respectively, are thrips-pollinated; and possibly coffee (Coffea spp.), cacao (Theobroma cacao) and chili peppers (Capsicum spp.) are too, at least partially. Bearberry (Arctostaphyllos uva-ursi) and other heath or heather species (family Ericaceae), long assumed to self-fertilize, are pollinated to some degree by thrips, especially in high latitudes where other insects become scarce.

Elder or elderberry (Sambucus nigra) is another strong candidate for thrips pollination. Evidence comes from exclusion experiments – where thrips are kept off flowers and plant fertilization is then assessed – and from floral characteristics suitable for thrips such as compact inflorescences and powdery pollen. Elder grows in woodland, grassland, scrub, hedgerows, roadsides, brown sites, or any habitat with disturbed soils across most of Europe. If thrips pollination is confirmed, it would set this plant apart from other common members of the European flora.

Elder in flower, a haven for thrips © Willow, Wikimedia Commons. 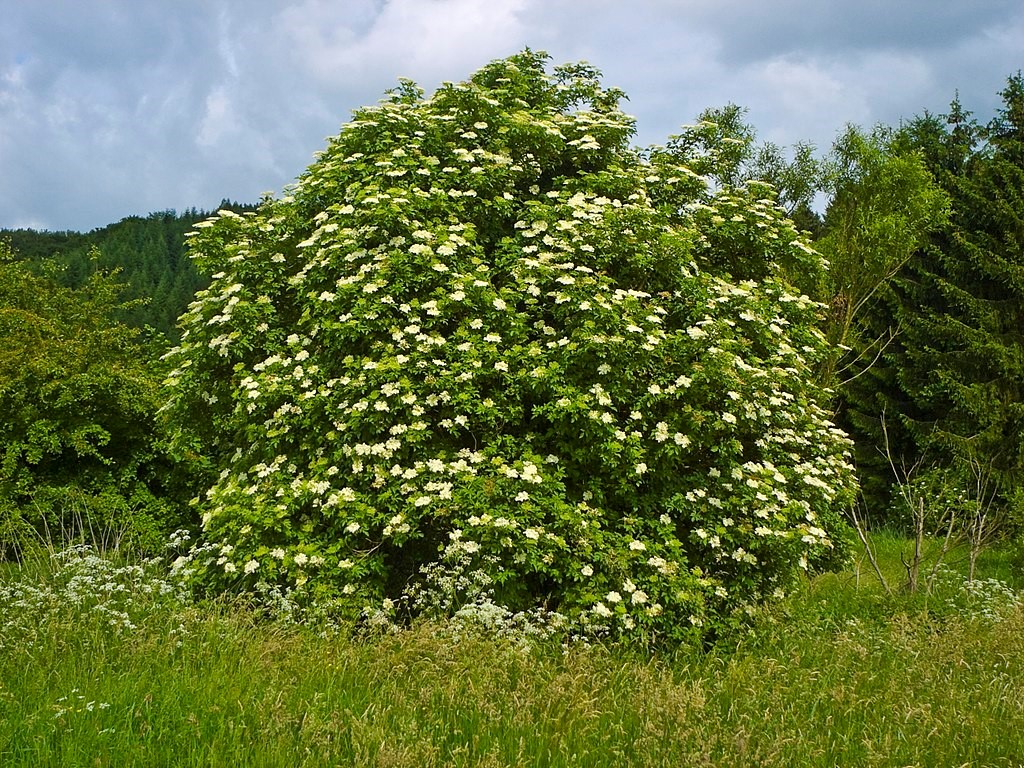 Thrips pollination is relatively rare and poorly understood, but it has been going on at least since the Early Cretaceous (145 million years ago, give or take a few months). And it reminds us of some important points. Bees and flies may have the spotlight as far as pollination services go, but there are other players out there, even though we know very little about them and how they interact with each other. They often have conflicting roles – as destructive pests, biological control agents or pollinators – so we must be cautious when considering intervening. Nature is complicated.

Thrips are not liked, but they could do much worse on the empathy scale.

When people are asked to list their most feared or reviled animals, sharks are almost invariably mentioned; snakes, wolves and crocodiles are other popular bogeys. These choices reveal a sharp dissonance with the real world, because sharks account for some 80 unprovoked bites per year, with about ten deaths: lightning is about 50 times more deadly. Wild reptiles and mammals are slightly more dangerous, dispatching an estimated 75,000 souls annually.

We may have nightmares about big wild beasts, but most of us are unaware they are small fry when compared to some of the Grim Reaper’s most efficient agents: mosquitoes.

According to the World Health Organization, mosquito-borne diseases kill around 725,000 people a year, some 600,000 of them from malaria. Dengue, West Nile virus, yellow fever, zika, and many other pathogens and parasites transmitted by mosquitoes add to the vast numbers of people killed or debilitated, mostly children and the elderly in developing countries. 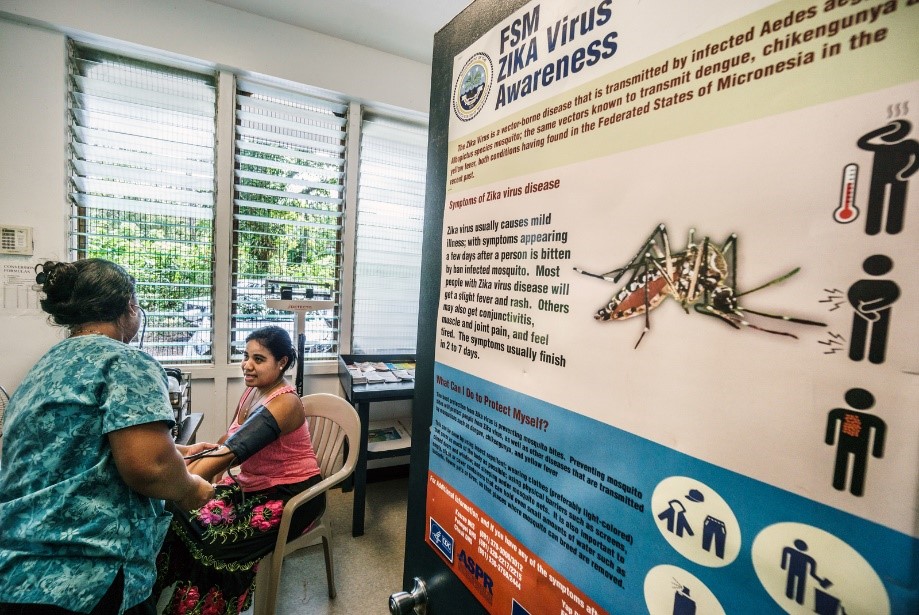 Considering the magnitude of suffering, let alone the economic impact of mosquito-borne diseases, nobody could be blamed for wishing mosquitoes to disappear from the face of the Earth. And with today’s knowledge and technology, a mosquito wipeout is not farfetched. Large-scale programs of genetic manipulation, male sterilization, bacterial infection or another technique could do the trick.

The question is, should we have a go at getting rid of mozzies?

There are more than 3,000 species of mosquitoes (family Culicidae), and most of them go about their lives feeding on nectar and other plant substances, never getting even close to humans or other animals. Only 200 or so feed on people, and a handful are responsible for the spread of diseases: mostly species from the genera Aedes, Anopheles and Culex.

So, eradication schemes would likely sweep away innocent bystanders, which comprise the majority of mosquitoes. And there could be consequences. Mosquito larvae and adults are food to dragonflies, tadpoles, some turtles and fish; adults are also eaten by bats and birds. In the Arctic tundra, the Biblical numbers of mosquitoes during summer are a significant menu item for migratory birds. But ecologists debate the importance of mosquitoes as a food source: some maintain that bats, fishes and birds would decline sharply, with reverberations along the food chain; others believe that mosquito eaters would adapt and switch easily to midges and other insects.

Mosquitoes are considered mostly nectar thieves, that is, they take nectar without transferring pollen between flowers. But as improbable as it sounds, some of the pesky creatures pollinate. The blunt-leaved orchid (Platanthera obtusata) and the Northern tubercled bog orchid (Platanthera flava) give off faint mixtures of scents that some Aedes mosquitoes find irresistible. When a mosquito sticks its head into these orchids’ flowers, it may come out with a pollinium (a bag of sticky pollen) glued to it. The pollinium can be almost as big as the mosquito’s head, and it’s surprising the reluctant pollinator is able to fly away. Both orchids are pollinated by moths as well, but mosquitoes seem to be their main pollinator.

Left and bottom right: male and female Aedes aegypti probing the flowers of a blunt-leaved orchid. Top right: A pollinium attached to the eye of a mosquito © Lahondère et al., 2019. bioRxiv, now published in PNAS 117: 708-716. 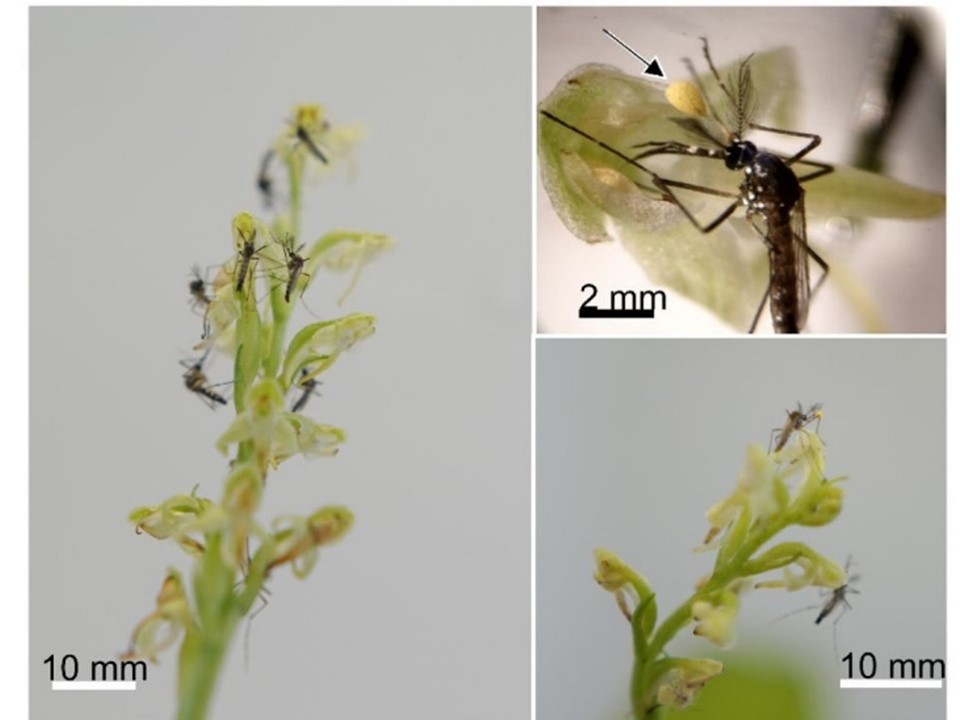 Other orchids are mosquito-pollinated, and probably several other plant types are too. Culex pipiens and related species contribute to pollen transfers for tansy (Tanacetum vulgare) and other members of the Asteraceae, and for the aptly named mosquito flower (Lopezia racemosa) and Spanish catchfly (Silene otites). Aedes spp. help pollinate the white mountain-avens (Dryas integrifolia). 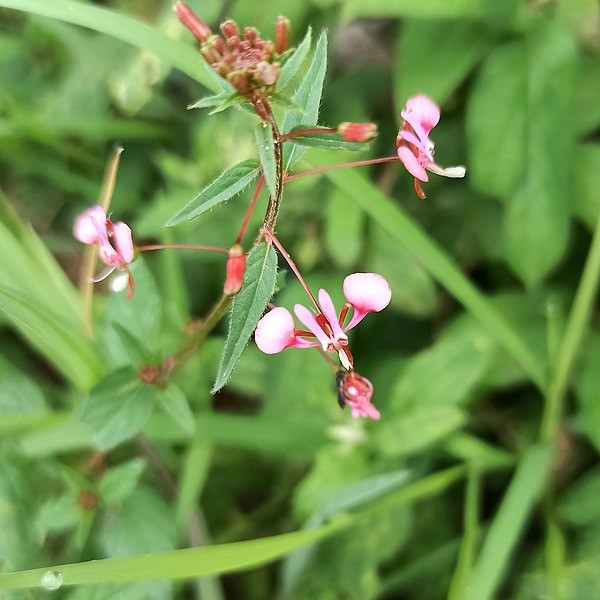 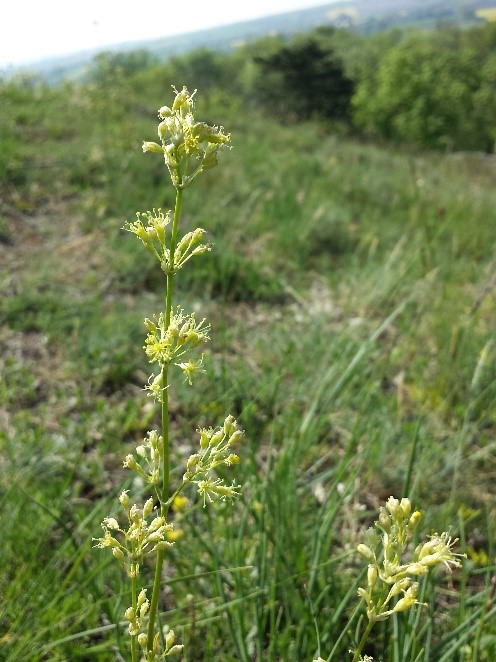 Evidence for mosquito pollination is often circumstantial but credible. Field collected specimens can be loaded with pollen grains, at levels comparable with moths and butterflies.

What would happen to those plants in a world without mosquitoes? It’s impossible to say. They could get by with the help of alternative pollinators or by self-pollinating, or they may go extinct. If we ever have the wherewithal to eliminate mosquitoes, we will need to ponder the balance between deliberate species extinctions and sparing millions of human beings and animals from death and sickness. The dilemma will keep many a moral philosopher awake at night.