Here’s a medical paper reported on the NBC News site as showing that the “social contagion” hypothesis for the increase in transgender adolescents (i.e., young people acquire gender dysphoria because of social pressure) has been refuted.  In fact, I’ve read the paper and don’t know what to make of it, since the data are at odds with other data, and some claims don’t seem to support the authors’ hypothesis.  The author’s claims clearly need further testing.

“Social contagion” is not driving an increasing number of adolescents to come out as transgender, according to a new study published Wednesday in the journal Pediatrics.

The study also found that the proportion of adolescents who were assigned female at birth and have come out as transgender also has not increased, which contradicts claims that adolescents whose birth sex is female are more susceptible to this so-called external influence.

“The hypothesis that transgender and gender diverse youth assigned female at birth identify as transgender due to social contagion does not hold up to scrutiny and should not be used to argue against the provision of gender-affirming medical care for adolescents,” study senior author Dr. Alex S. Keuroghlian, director of the National LGBTQIA+ Health Education Center at the Fenway Institute and the Massachusetts General Hospital Psychiatry Gender Identity Program, said in a statement.

You can see the short paper in Pediatrics below for free; the pdf is here (you may have to revisit the page below if you want to go back to the pdf), and the reference is at the bottom.

Psychiatrist Jack Turban is known as a big advocate of “affirmative care,” which assumes that an adolescent’s self-identification is correct, and then affirms it both through therapy and eventually through puberty blocking (if needed) and surgical and other medical interventions. And indeed, as I’ll show below, this paper seems a wee bit tendentious, pushing hard to refute the “social contagion” hypothesis. But it may be justified if social contagion is used as a way to block any kind of affirmative therap—which sometimes is the appropriate therapy.

I’ve thought (based largely on anecdotes) that social contagion may be one cause of the increase in gender dysphoria that may lead to transsexuality, but there are of course other causes, like a lessening of the stigma of being transgender, so I don’t have much of a dog in this fight. But there is other evidence for social contagion in the literature, including that cited in Abigail Shrier’s book Irreversible Damage as well as the video at the bottom, which is being shown in some elementary schools.

a.) If the social contagion hypothesis is correct, the number of gender dysphoric adolescents should be increasing.

b.) Further, most of the adolescents who become dysphoric would be female rather than male (I’m not sure where that came from a priori, as it’s not necessary for a “social contagion” hypothesis.)

The authors then used data taken from 91,937 adolescents surveyed in two years: 2017 and 2019. They determined if they were biologically male or female, giving them the acronyms AMAB (“assigned male at birth”) and AFAB (“assigned female at birth”) respectively. One problem is that these designations came from asking the adolescents “What is your sex?”  That is not the same as asking “What sex were you assigned at birth?”, especially for young people who feel that they are members of the other sex.  But we’ll let that slide.

They then decided whether or not a child was transgender using this method:

This sounds fine, and note that it’s based on self report. Note as well that there’s no way of knowing whether any gender dysphoria was of the “rapid onset” or “non-rapid-onset” form.

I’ll give the three results of Turban et al.’s analysis:

2).  There was no increase in the number of transgender adolescents between 2017 and 2019.

Here are the data from which these conclusions are drawn.(“YRBS” is the “Youth Risk Behavior Survey” used to collect the data). 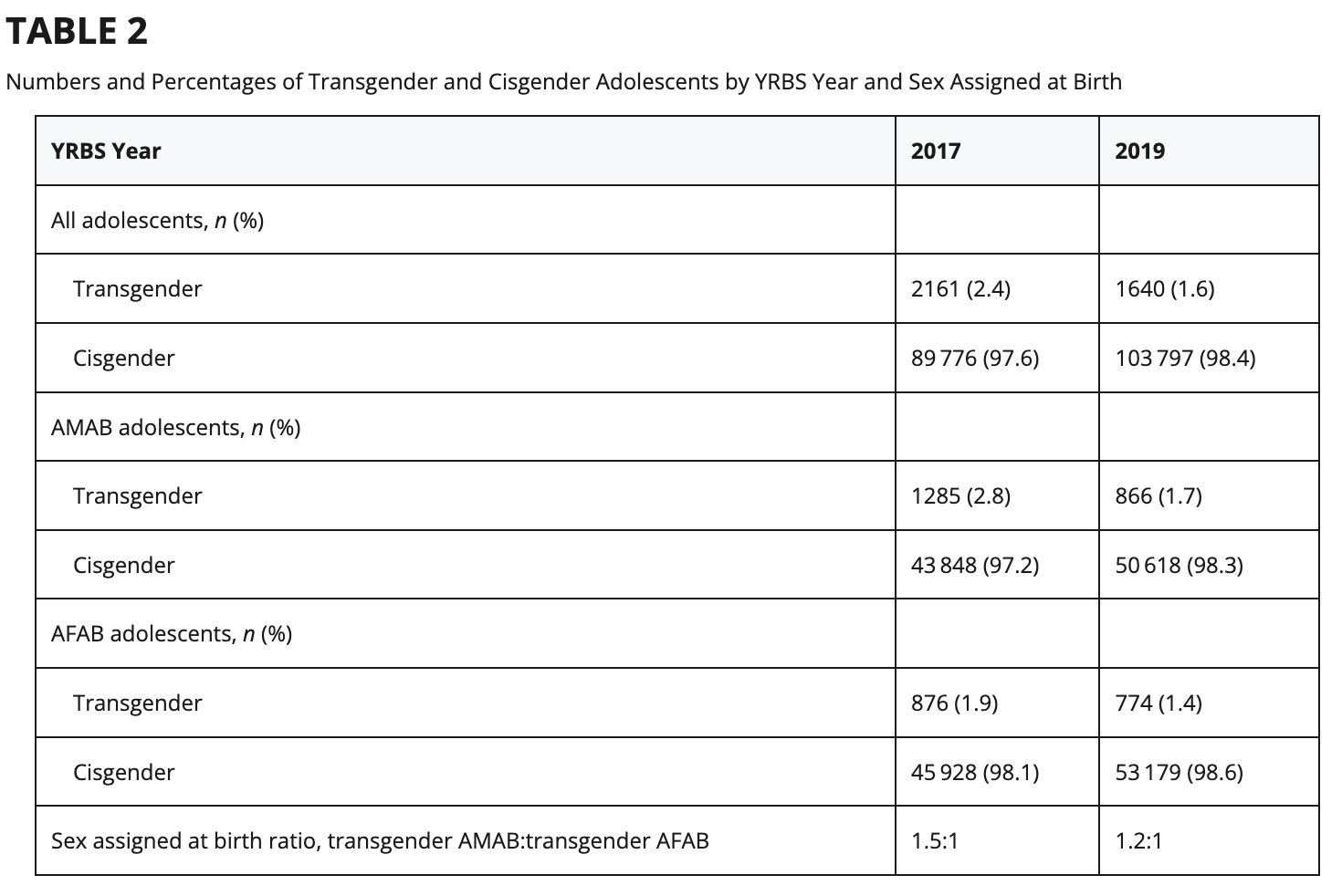 This is in stark contrast to the data from the UK, which was gathered by looking at adolescents referred for gender treatment to the Tavistock Clinic in London (soon to be dismantled). That data (and other data cited below) show not only a stark increase in numbers over 8 years, but a stark increase in the proportion of biological females with gender dysphoria compared to males.

Here are those data, which I’ve shown before:

Why the disparity? One obvious clue is that Turban et al.’s data are self reports for surveys, while the data just above are individuals referred to a clinic for treatment. One hypothesis for this is that females suffer from gender dysphoria more than males, and thus are driven to seek treatment more often. In other words, biological females suffer more seriously from the dysphoria. And that neither supports nor contradicts the “social contagion hypothesis”. As for the rise over time, it could be explained either by the social contagion hypothesis or a rapid de-stigmatization of transgender people.

Remember that, besides the very different way adolescents were identified, the Turban et al. data are from the U.S., while the data above are from the U.K.  Given this disparity, and other reports of disproportionate increases in AFAB vs AMAB dysphoric patients (references 9 and 10 in the Turban et al. paper), what we have here is a mass of conflicting data. My own view is that AFAB adolescents experience the dysphoria more strongly than AMAB, and thus seek out treatment, as the Tavistock data and the two references just mentioned all come from clinics. Sex differences in the seriousness of dysphoria could explain these disparities, which aren’t mentioned by Turban et al.; they dismiss references 9 and 10 because their data came from smaller and less representative populations than other studies, though Turban et al.’s studies are not from adolescents reporting to clinics, but surveys of high school students.

Indeed, if you’re concerned about causes of transitioning, the clinical data might be more relevant than the self-report data, for it is those adolescents who go to clinics who are the ones that actually transition. People are worried not about “feelings of being transgender,” but actually changing your gender in an irreversible way.

One person I sent this draft to suggested I add this:

“This study was conducted when the trans numbers at school were already quite widespread and reaching a plateau.  At this stationary period it won’t be as evident that there is a social spread, since all schools already have the “contagion” and you won’t see local increases in numbers.  To see the contagion more clearly they would have to follow cohorts of children from 4th to 7th grade, when most of the gender identification happens.  Does it happen in groups of friends?  In schools that are emphasizing gender identify?  In schools that have extensive pride celebrations and secret LGBTA clubs?”

I’ll leave you to judge that for yourself.

Here are the data from Turban et al.’s paper (click on screenshots if you can’t read this).  The take-home lesson is that there’s substantially more bullying (both at school and electronically) in children self-identifying as transgender than cisgender, as well as a higher suicide rate. To the authors, this confirms that social contagion cannot be a factor, for transgender people face more bullying than cisgender children. 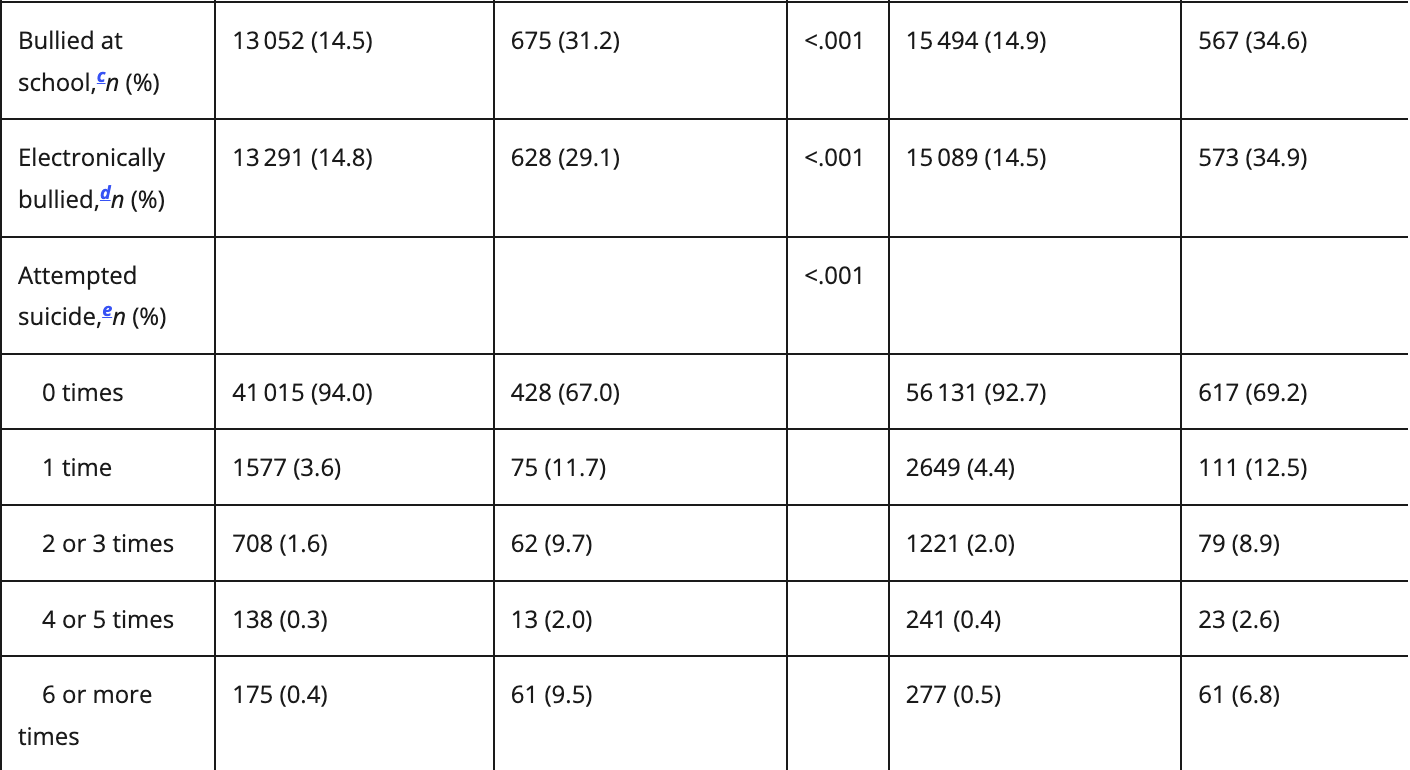 Although I’m not wedded to a social-contagion hypothesis, I don’t think these data rebut it very strongly. In terms of bullying, being bullied more does not automatically mean that you also don’t get more approbation, particularly on social media. There is no affirmation from peers examined; the question wasn’t asked. Further, many children with gender dysphoria may act differently from others because they’re mentally distressed, going through a period of turmoil as they figure out who they are; and that would explain the bullying as well as the suicide.  While the bullying statistics suggest that there may be some disapprobation connected with feeling transgender, the authors really need to see as well how much affirmation these adolescents got, particularly online, which is where it usually happens. (There is no doubt about that kind of affirmation; it’s been reported widely.)

All in all, the sex disparity between clinical and self-report data gives rise to a hypothesis that women experience dysphoria more strongly than men, which can’t be seen as a refutation of the “social contagion” hypothesis. The bullying data may have some relevance, but I’d like it leavened with data on affirmation—the other side of the coin. How often did these dysphoric adolescents receive support online?  Finally, the suicidal data seems irrelevant to me, as it may be connected with feelings of dysphoria themselves, regardless of its cause. It may have absolutely nothing to do with the bullying.  We know that mental illness or mental distress often accompanies gender dysphoria.

One thing that bothered me was how readily Turban et al. as well as NBC News saw this study as dispositive (he is an “affirmation guy”), and didn’t mention the Tavistock data. And of course we have only two years’ worth of data here, which is a limited time span to make such broad generalizations. To Turban’s credit, though, he’s trying do correct legislatures overstepping by trying to eliminating any form of “affirmation” in treating dysphoric adolescents.

The deleterious effect of unfounded hypotheses stigmatizing TGD youth, particularly the ROGD hypothesis, cannot be overstated, especially in current and longstanding public policy debates. Indeed, the notion of ROGD has been used by legislators to prohibit TGD youth from accessing gender-affirming medical care, despite the considerable methodological limitations underlying the generation of this hypothesis, as well as the unequivocal support for gender-affirming medical care by multiple major medical organizations, including the American Medical Association, the American Academy of Pediatrics, the American Academy of Child & Adolescent Psychiatry, and the American Psychiatric Association. Multiple studies have revealed that prohibiting TGD adolescents from accessing gender-affirming medical care would be expected to have detrimental impacts on TGD youth wellbeing. The current study adds to the extant research arguing against the ROGD hypothesis by providing evidence inconsistent with the theories that (1) social contagion drives TGD identities, with unique susceptibility among AFAB youth, and (2) that youth identify as TGD due to such identities being less stigmatized than cisgender sexual minority identities.

In the end, whether the social contagion hypothesis is true should have nothing to do with how gender dysphoric youth should be treated. What causes dysphoria tells us very little about what form of therapy is needed. Although politicians may prohibit affirmative care, they shouldn’t, but neither should care be envisioned as completely affirmative at the outset. Given the consequences of premature transitioning, the care should be empathic but not tendentious, not trying to push children to change their gender.

NBC News bought this study whole hog, and doesn’t mention any potential problems or the three sets of contradictory data.  That’s because they don’t have reporters who are familiar with this controversy, and certainly can’t adjudicate science.

As for affirmation, here’s a video a reader sent me which was shown at his/her children’s elementary school. I see this as affirmation, and I’m not that bothered by it. (Here’s an article about this kind of affirmation in other schools).  But if there’s bullying, at least we must admit that there’s also constant affirmation in the classroom and, as this video shows, on social media (look at all the social-media “likes” for coming out as you feel).

By the way, this comes from the AMAZE outfit, devoted to wokeist indoctrination of children. Check out this series of videos, for example.