I’m feeling drained and a bit low (I awoke at 2 a.m. and couldn’t get back to sleep), and really have nothing to say. So I thought I’d start a discussion thread. A suggested topic is this: “What was the best, or worst, or most memorable day of your life?”

I was led to this by an old memory that popped up for no apparent reason, a moment that was way back in 1971, the year I graduated from college. It wasn’t the best or worst day of my life, and maybe not even the most emotional or memorable, but somehow it sticks in my mind. I’ll recount it—not as a way of bragging—but to show how overwork in college nearly ruined me.

I entered William and Mary in 1967, and had some really stimulating courses. Those included biology (8 a.m. on the first day of school), and, being in the Honors Program, I got to take the equivalent of small seminars on Greek plays, as well as calculus, American literature, and other courses I can’t recall.

I don’t remember working especially hard, but I did do well, getting straight A’s.  And yet I ha a normal social life: going out to parties, drinking (we had to get upperclassmen to buy booze for us), and schmoozing a lot on the weekends.  But somehow that perfect academic record got its hooks into me. The next semester I worked a bit harder, and got straight A’s again.

By sophomore year, when I started taking advanced biology courses, as well as fine arts and chemistry, I was working even harder. I worked mainly because I loved the courses, but also because I needed to be the best—not just in every class, but on every test. (I got only one “B” on a test in my entire college career.) I loved the courses: philosophy, Old English, Beowulf, Ethics, Honors English, and Organic Chemistry, but I also killed myself trying to master the material.

By junior year it was well known that just two students in my class of 969 had maintained straight As; I was one and a sorority girl (a friend and a cheerleader) was another. But then I heard that she got a “B” in one course. That put me on top.  And that’s where I stayed, working 7 days a week, and from after breakfast (with meal breaks) to 11 pm. I did some socializing (I have a lot of anecdotes from my college years, including run-ins with cops, peace demonstrations, and the like), but if you looked up the definition of “grind” in the dictionary then, you’d find my picture.

By the second semester of senior year, my record was still perfect, both on tests and course grades, and I managed to take courses in which success was almost guaranteed: independent research and the like.  Finally, in June, I had my last final exam, and I knew I aced it.  I was going to be valedictorian, and had killed myself for four years to accomplish that. My overwork was unhealthy, of course: though I wasn’t really working for grades, I lost a girlfriend because of my obsessive work ethic, and didn’t have as much fun as other people. I remember my dad telling me, “Would it kill you to get a ‘B’ once in a while?” (Imagine a parent saying that!)

My last final exam ended in on a sunny spring afternoon, and all at once a huge weight dropped from me. It was over, and I knew that I never wanted to go through that again. I went to the Sunken Garden, a “sunken” meadow that’s the epicenter of the College, and lay down on the grass. All of a sudden I started sobbing, and I couldn’t stop. It was the sudden lifting of all the anxiety that had plagued me for four years. I’ll never forget that moment.

Here’s what the Sunken Garden look like: the campus of William and Mary is beautiful. I still remember where I lay down, and I’ve put an arrow there: on the inclined slope on the east side. 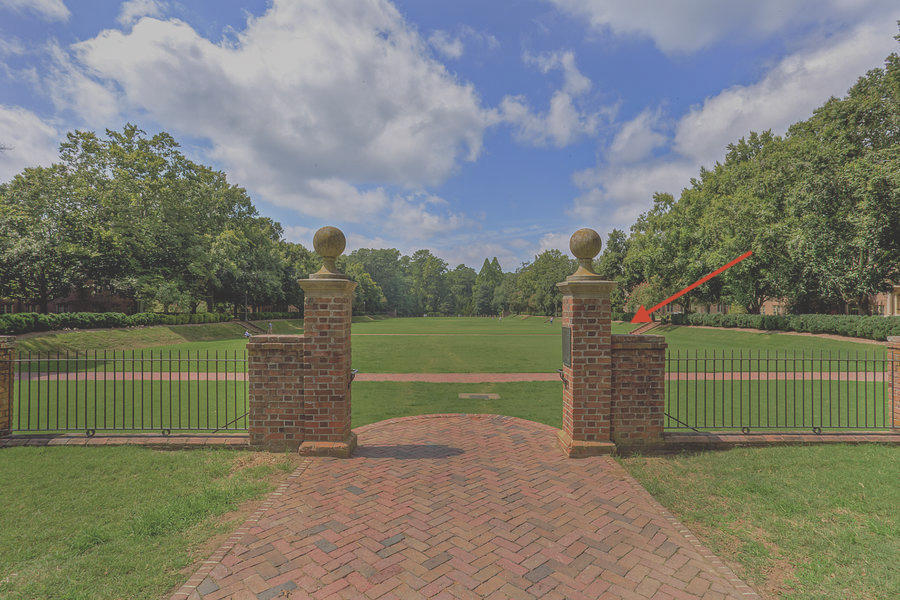 I’m not sure why I’m writing this, as it’s autobiographical and may not stimulate any discussion, but I’m hoping readers can highlight a memorable moment of their lives—perhaps the most memorable. Lying in the Sunken Garden, sobbing with relief, is something I’ll never forget. And yes, being #1 in my class was the hardest thing I’ve ever done, though if you asked me what I see as the academic thing I’m proudest of, it would be having written Speciation with Allen Orr. I was not proud of being a workaholic.

So, it’s your turn. I’m curious if people will comment (I hope so) and what they will say if they do.