Today’s photos come from a new contributor: Kevin Krebs of Vancouver, who gives a bit of backstory:

I’m currently helping out a researcher at the University of British Columbia who’s studying the reproductive ecology of urban-nesting Glaucous-winged Gulls (a bird so many people love to hate).
I’ve been able to find quite a few nests and get some fairly good photographs of the gull chicks.  Baby animals tend to endear people a little more to the species, and I hope these photographs help someone out there see the complex story of these unfairly derided birds.

Kevin’s captions and introduction are indented, and you can enlarge the photos by clicking on them.

Glaucous-winged Gulls nest in large colonies on offshore islands, but increasingly some pairs are breeding on rooftops in the city.  Research suggests these urban-nesting birds have increased success in fledging chicks, most likely due to reduced predation and territorial conflicts.  Spend some time walking across our downtown bridges between late June through early August looking closely at rooftops, and you’ll spy a nest or three.

Like most gulls, Glaucous-winged Gull nests are sparse, often only dried grasses piled in a corner or other area that offers some degree of shade. 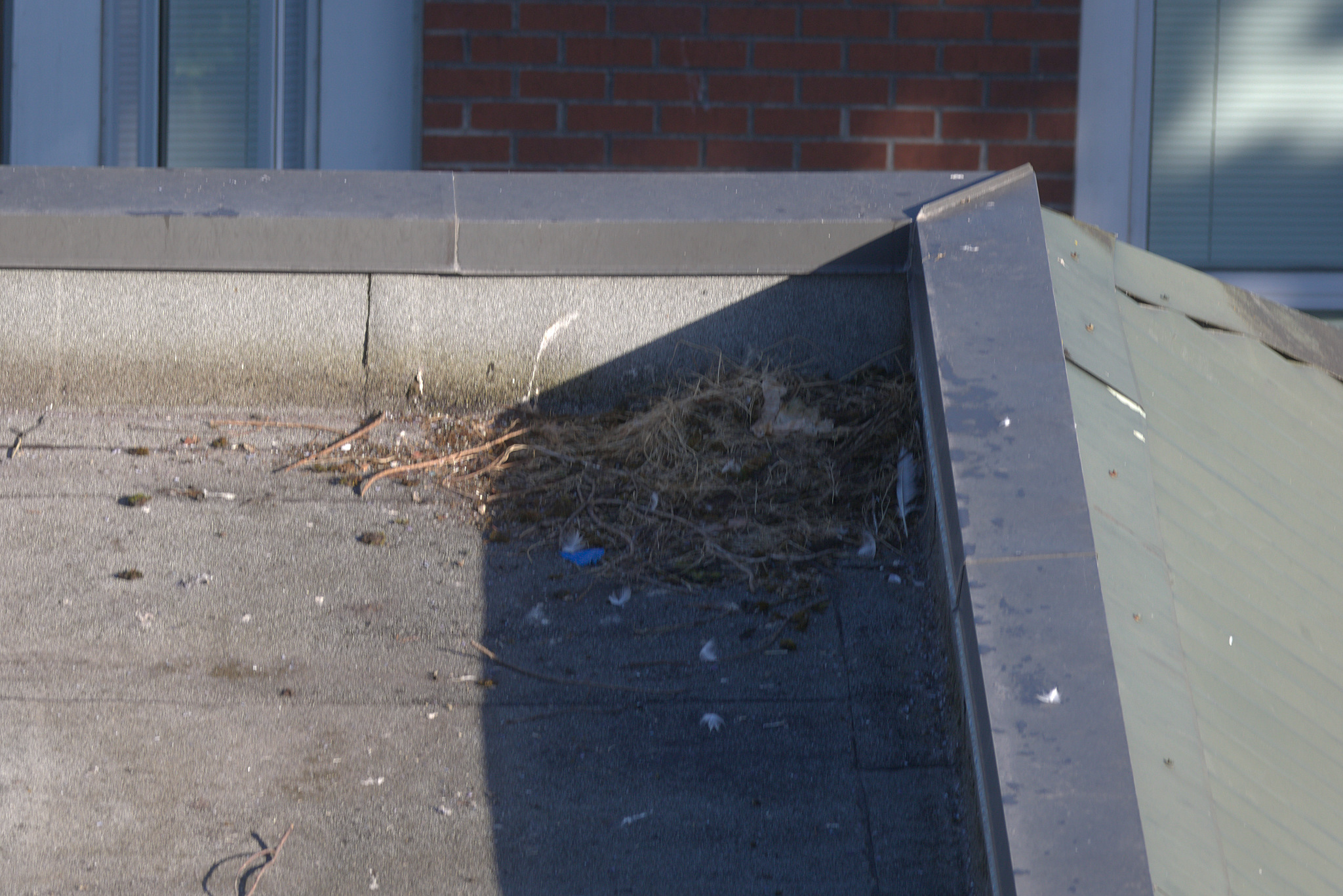 Three chicks with their parents on a spacious grassy rooftop. 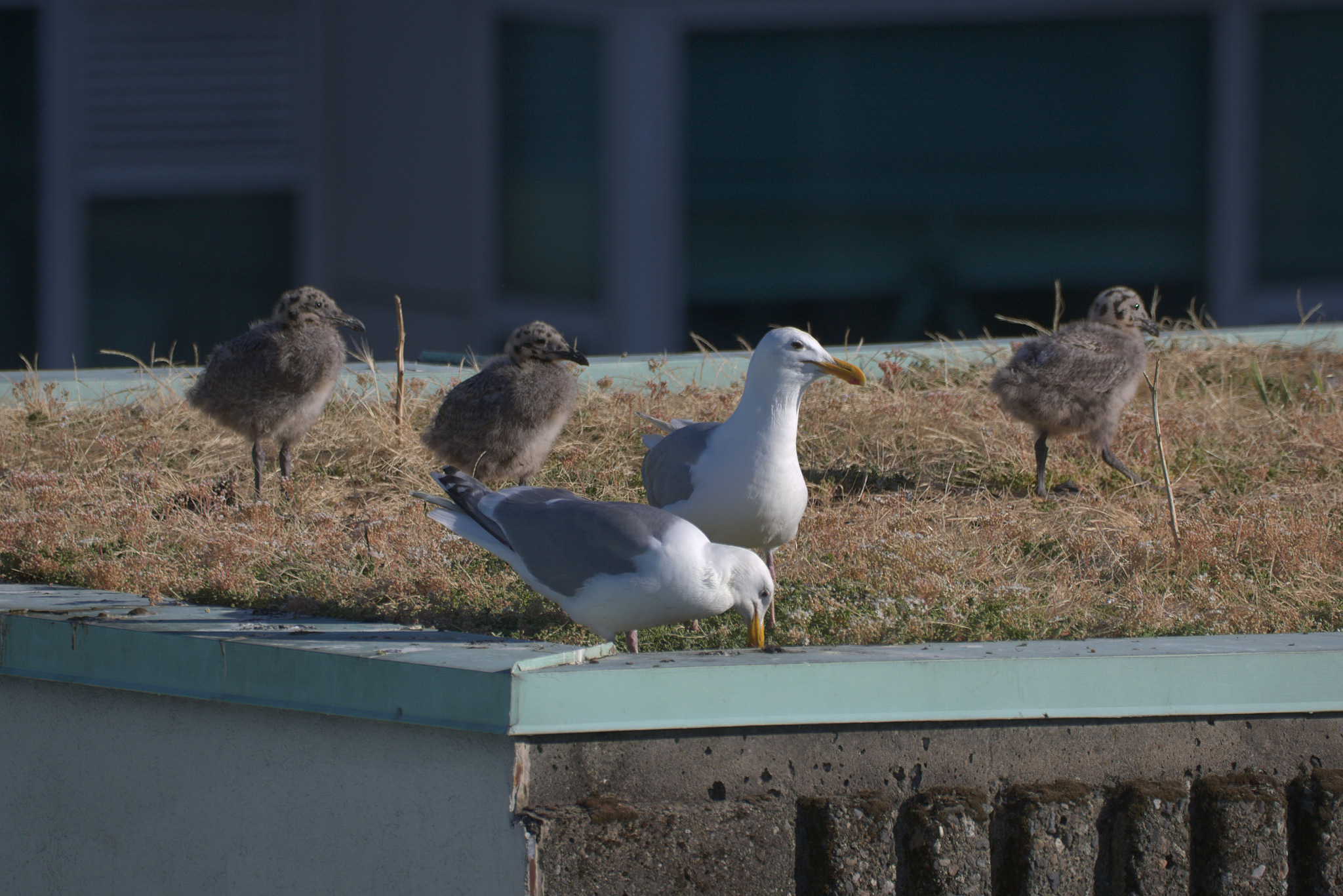 A closer photo of the three chicks from the photo above. Gull chicks can be particularly difficult to spot with their tan, spotted plumage, effectively camouflaging them in the habitat where they nest. 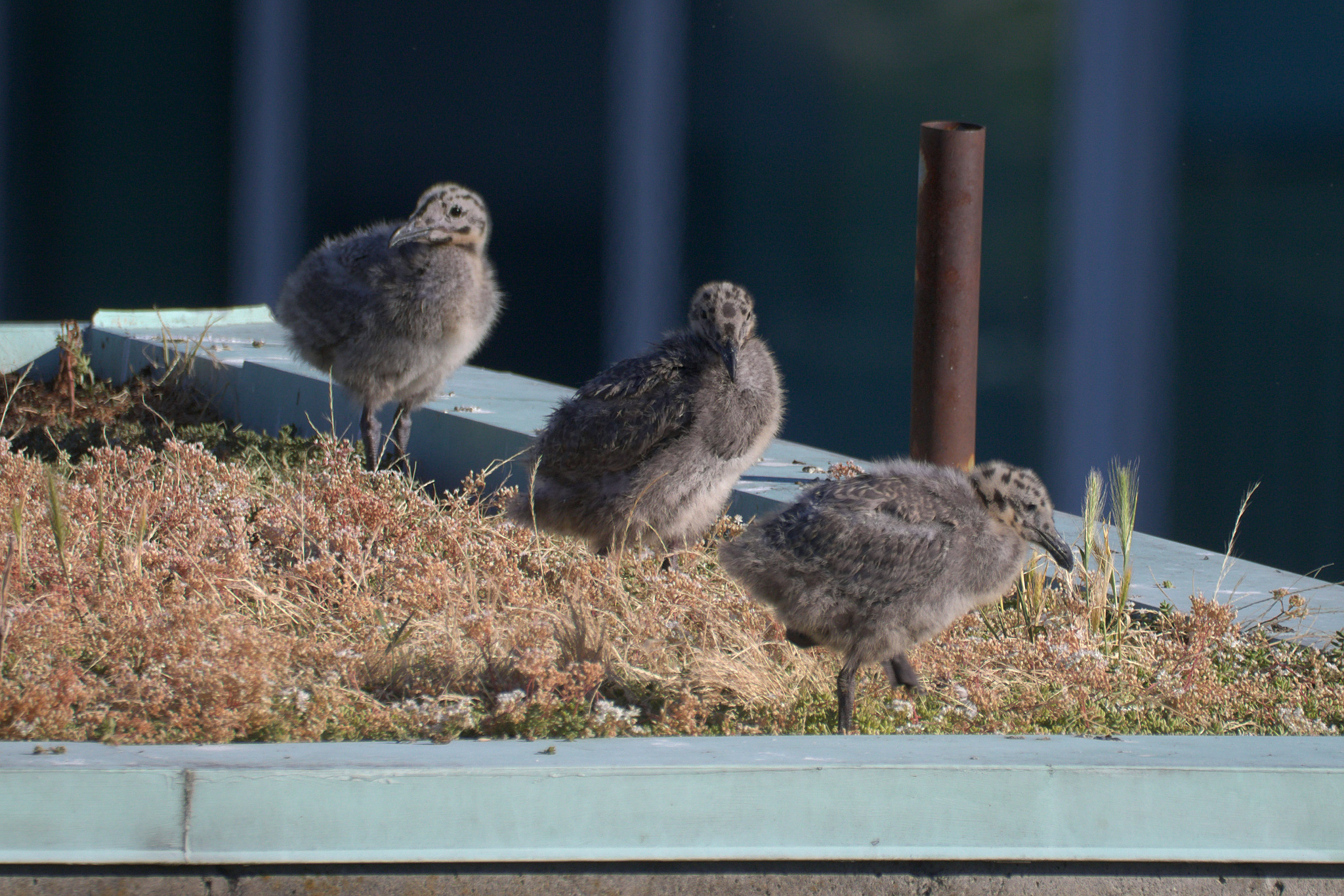 Three chicks and a parent nesting on a significantly smaller space. 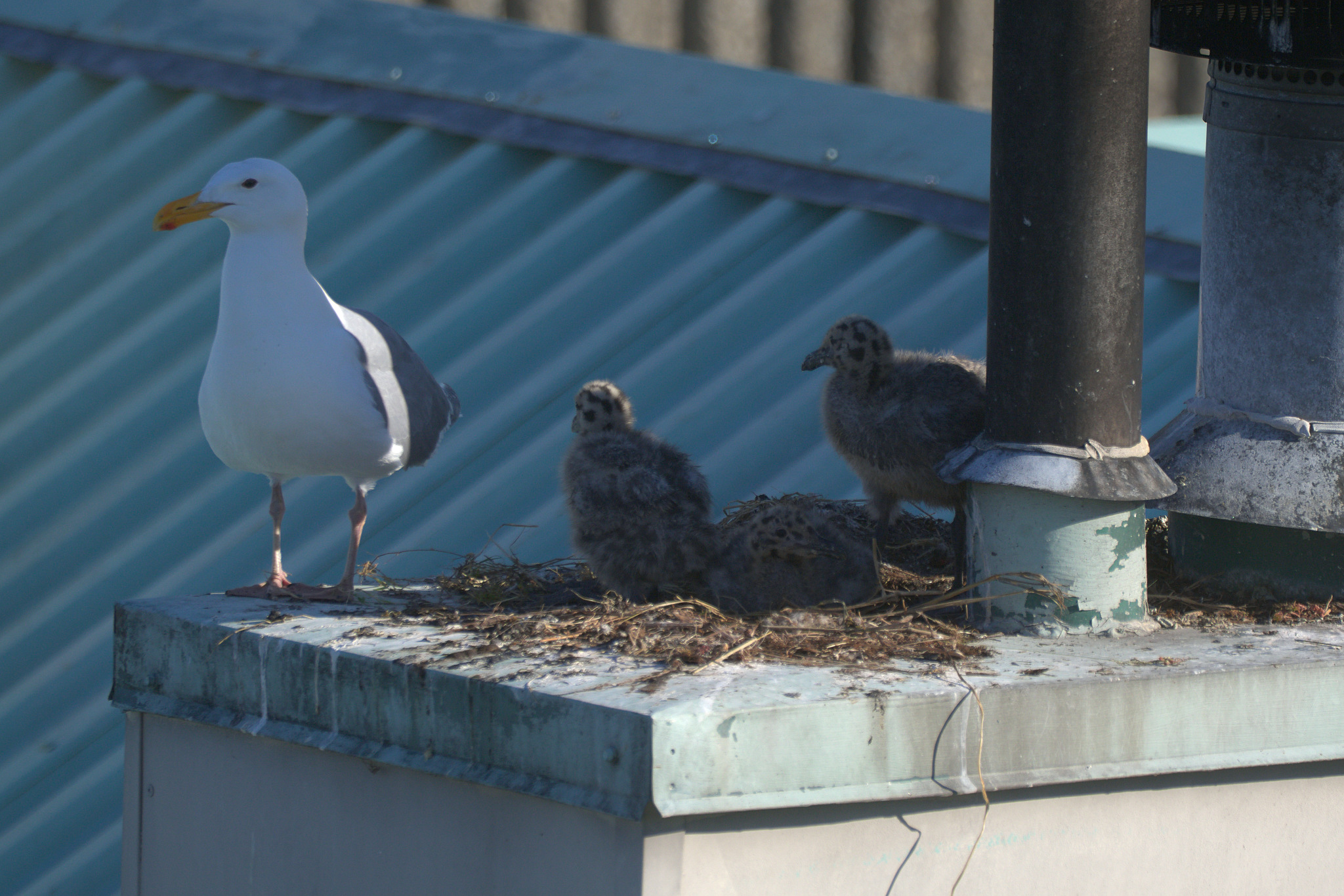 A close up of two gull chick siblings. 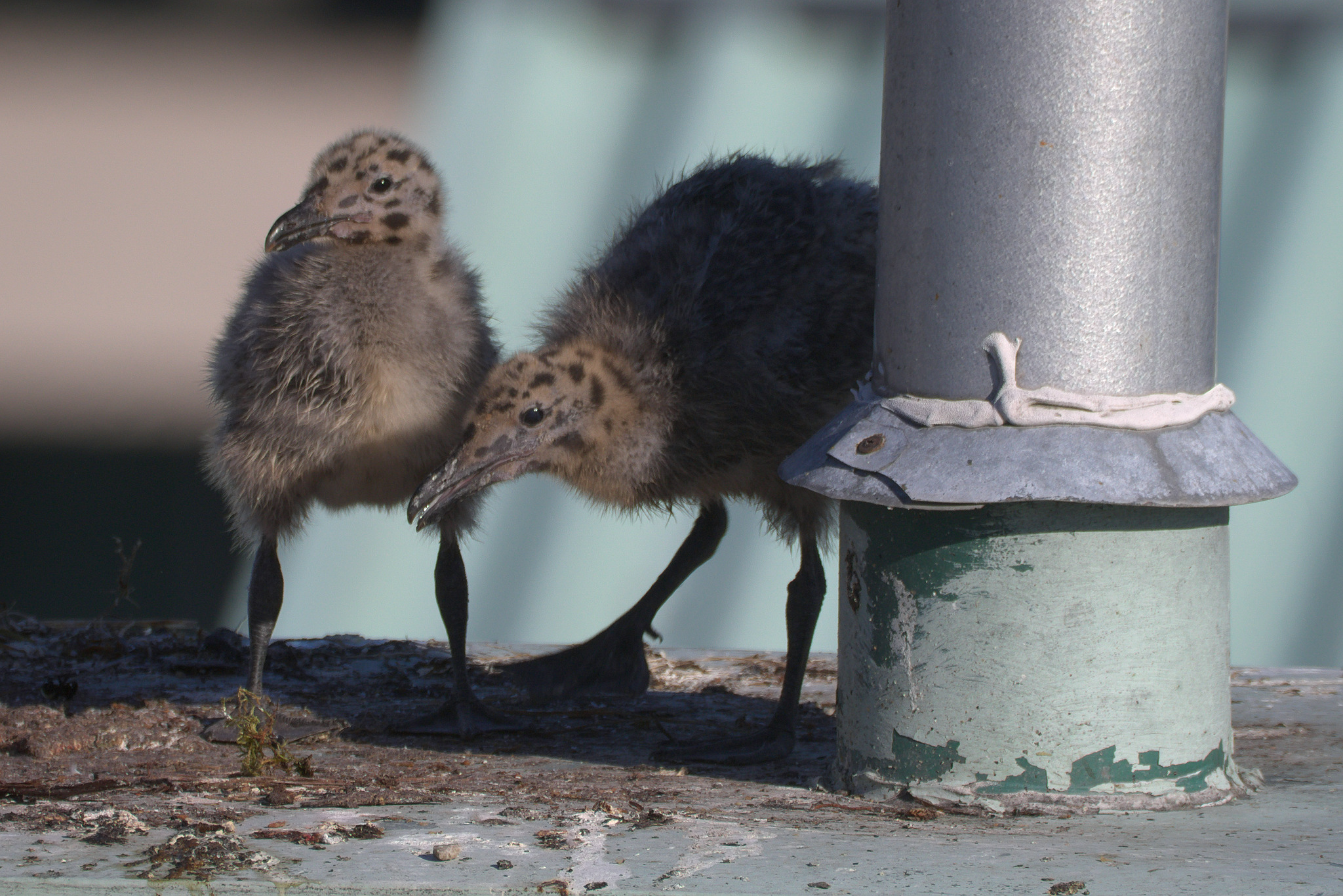 A chick stretches out its wing, giving us a good view of the pin feathers and development of juvenile plumage. 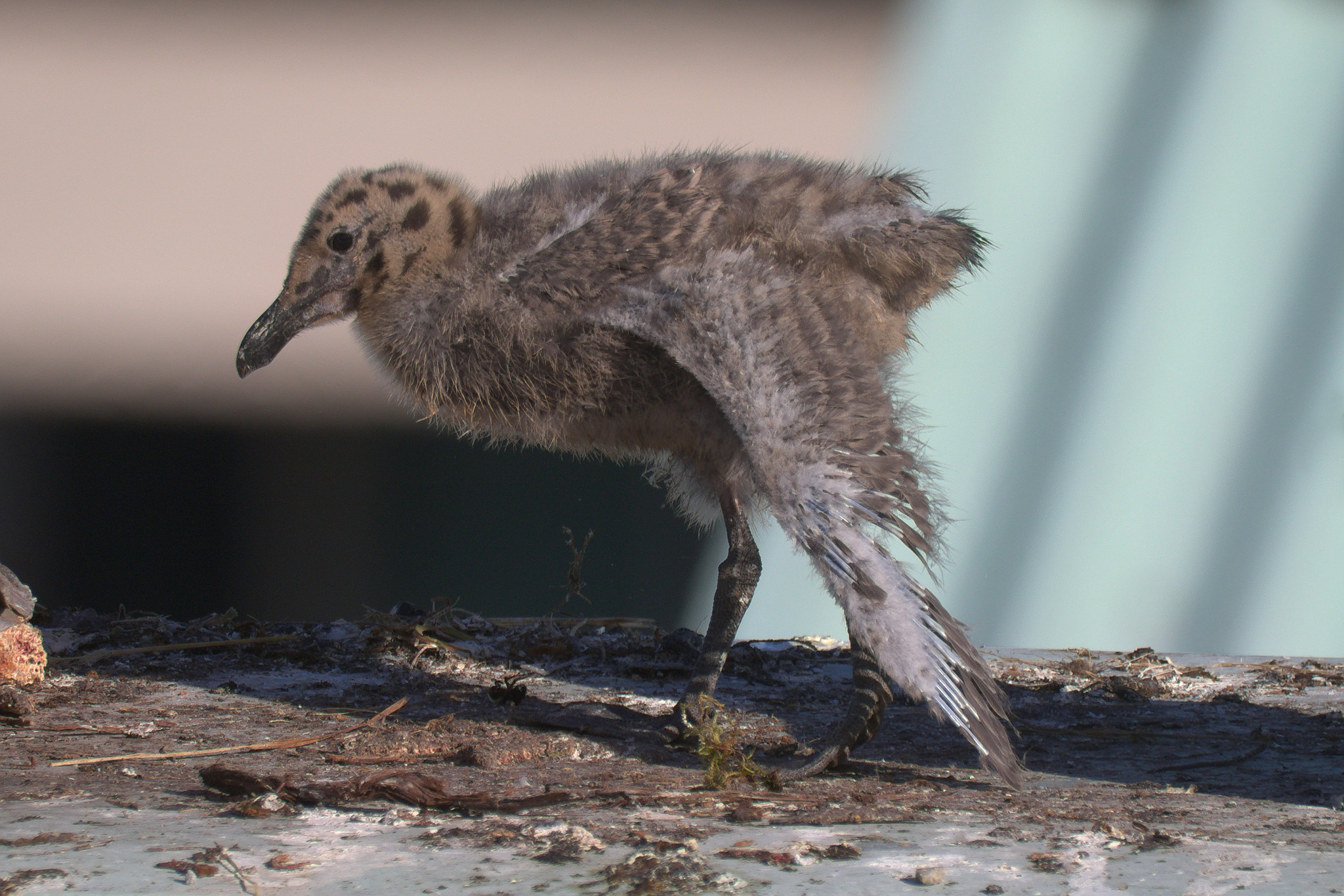 A parent regurgitates a meal for its chicks. 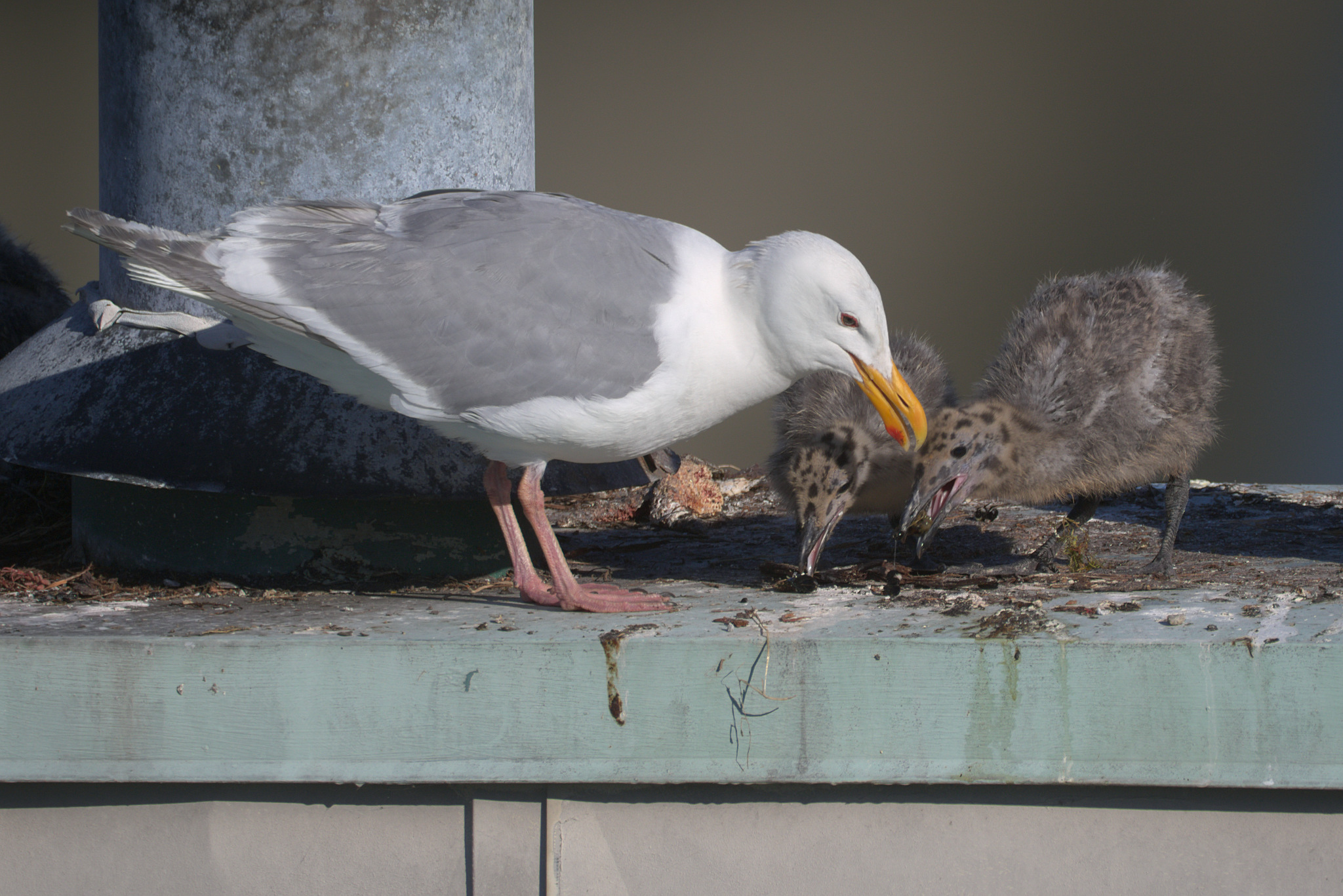 Two young gulls who’ve molted most of their down now look a little like grumpy old men. 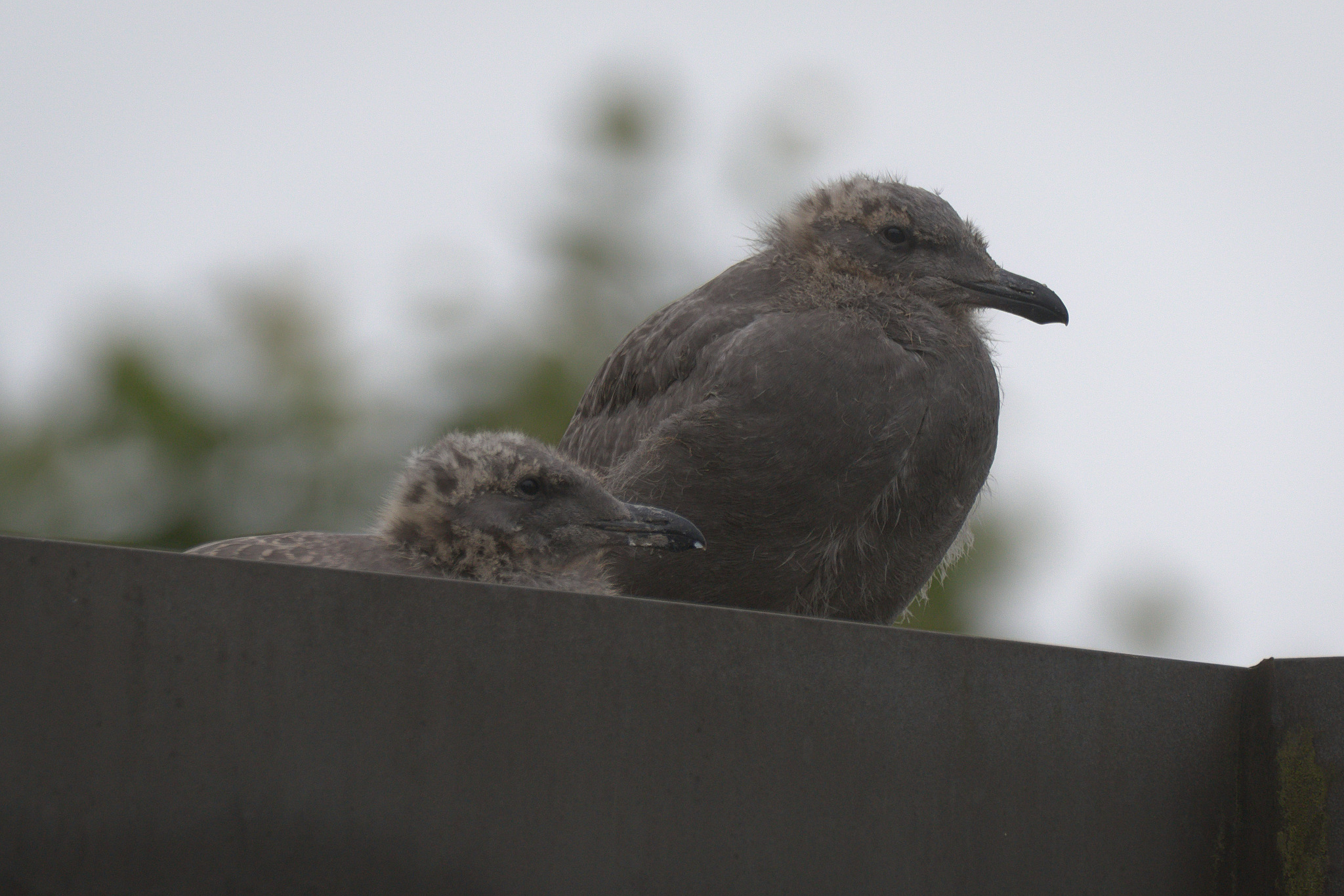 A young gull who’s almost fully molted into juvenile plumage. This gull still can’t fly, but it was running back and forth testing out its wings while I watched. 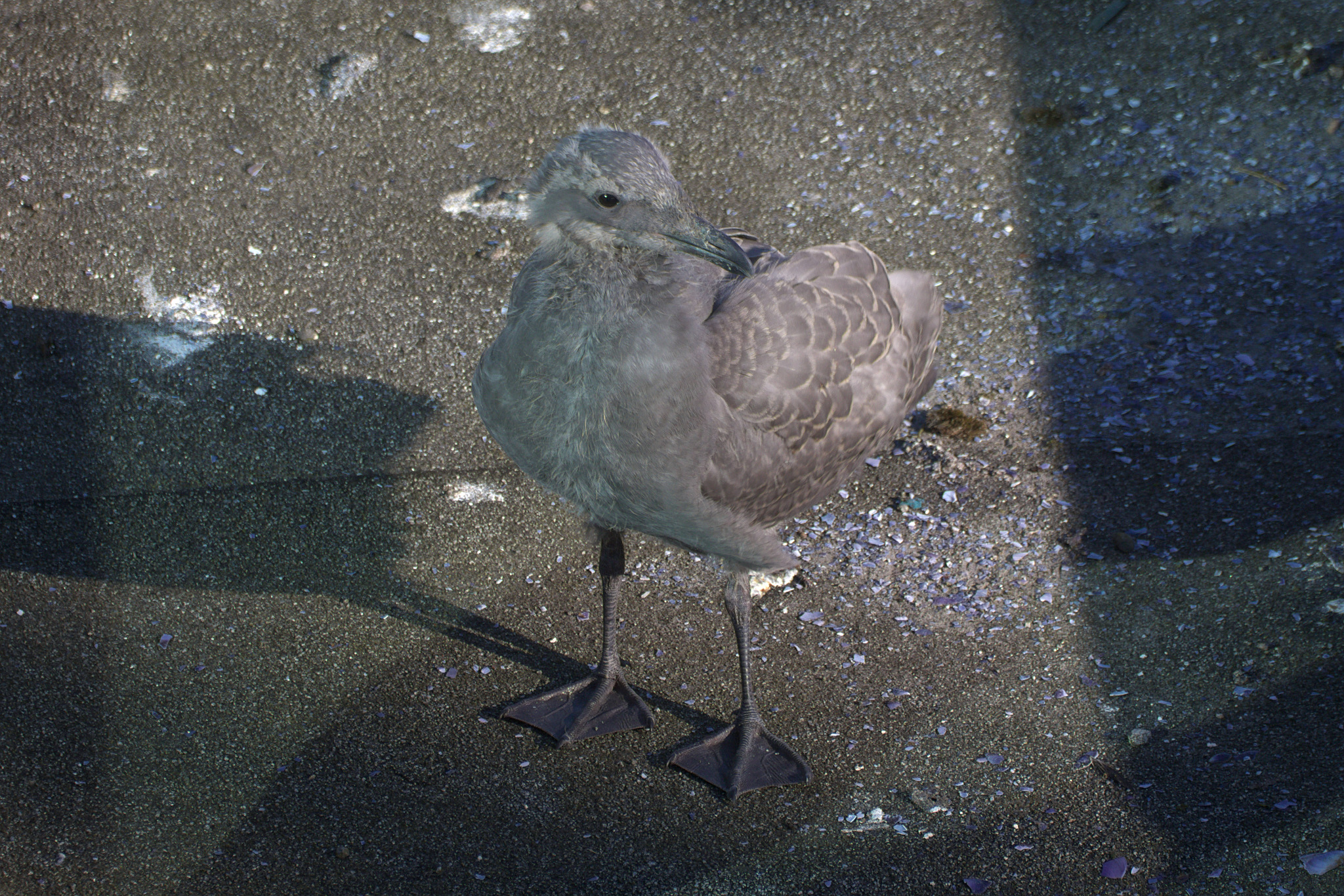 A parent keeps watch over a young chick on a foliage-covered rooftop. 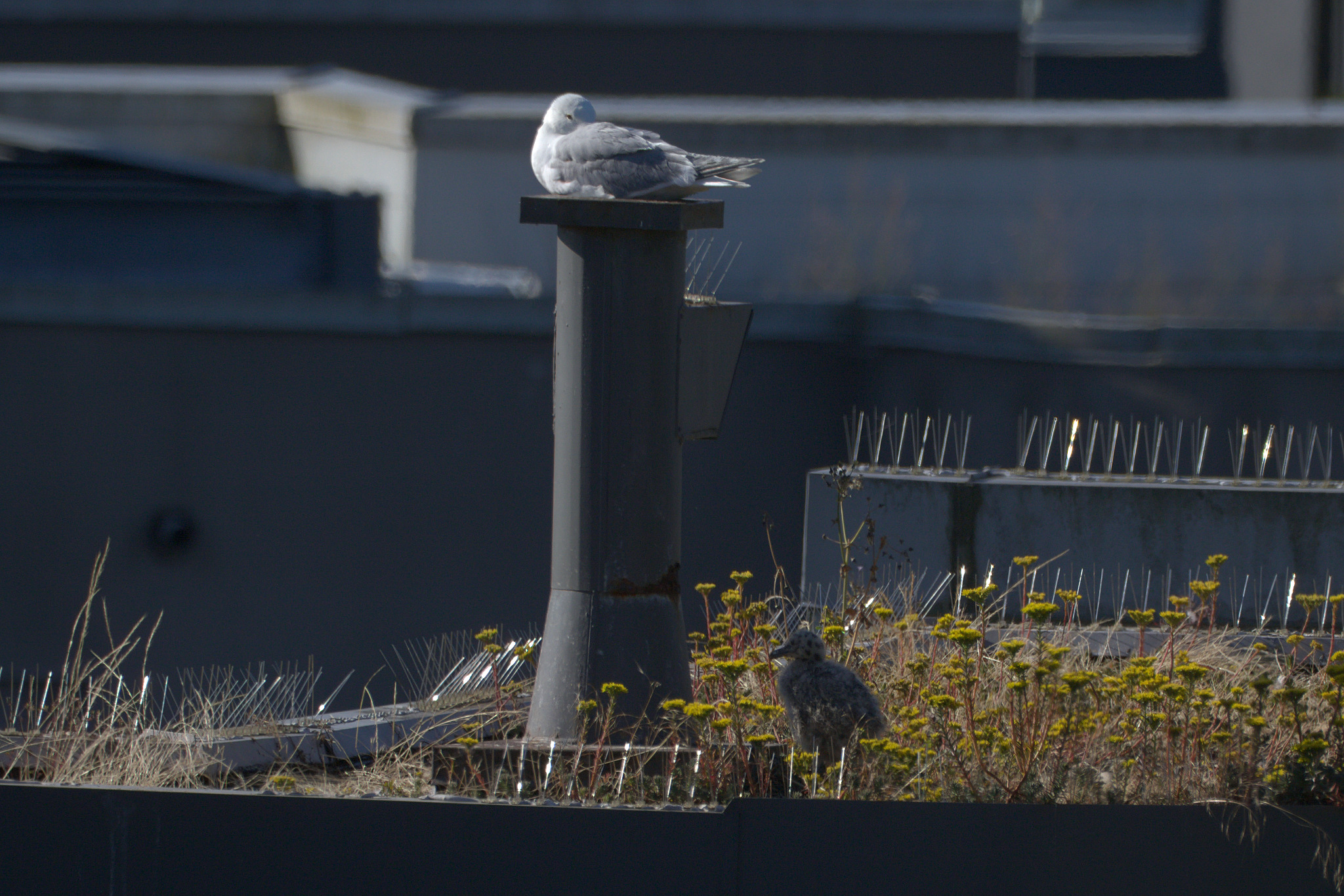 A lone chick hiding in the shade on a rooftop. 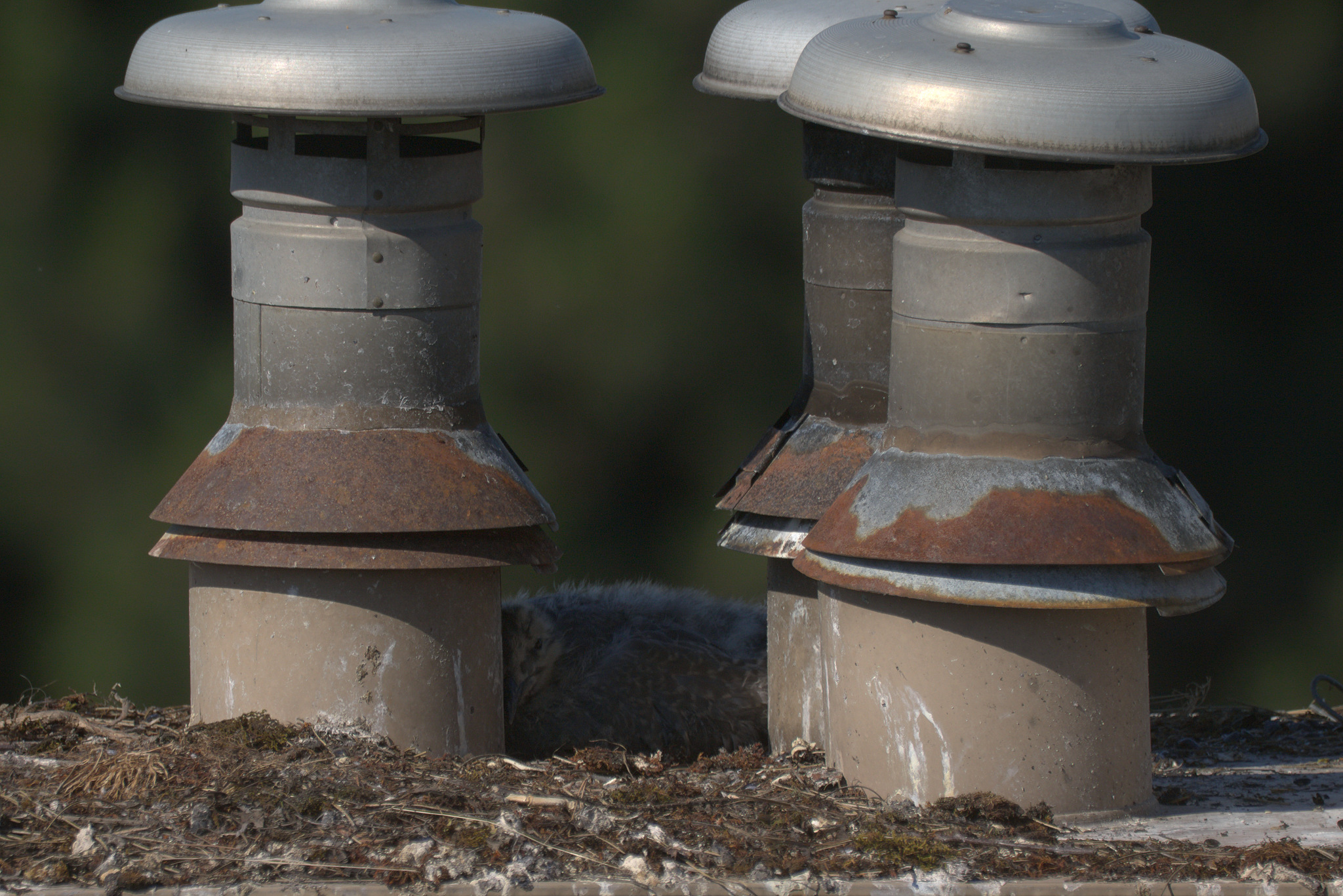 A parent with its two chicks. The size difference between these chicks is surprising, indicating one hatched some time after the other. 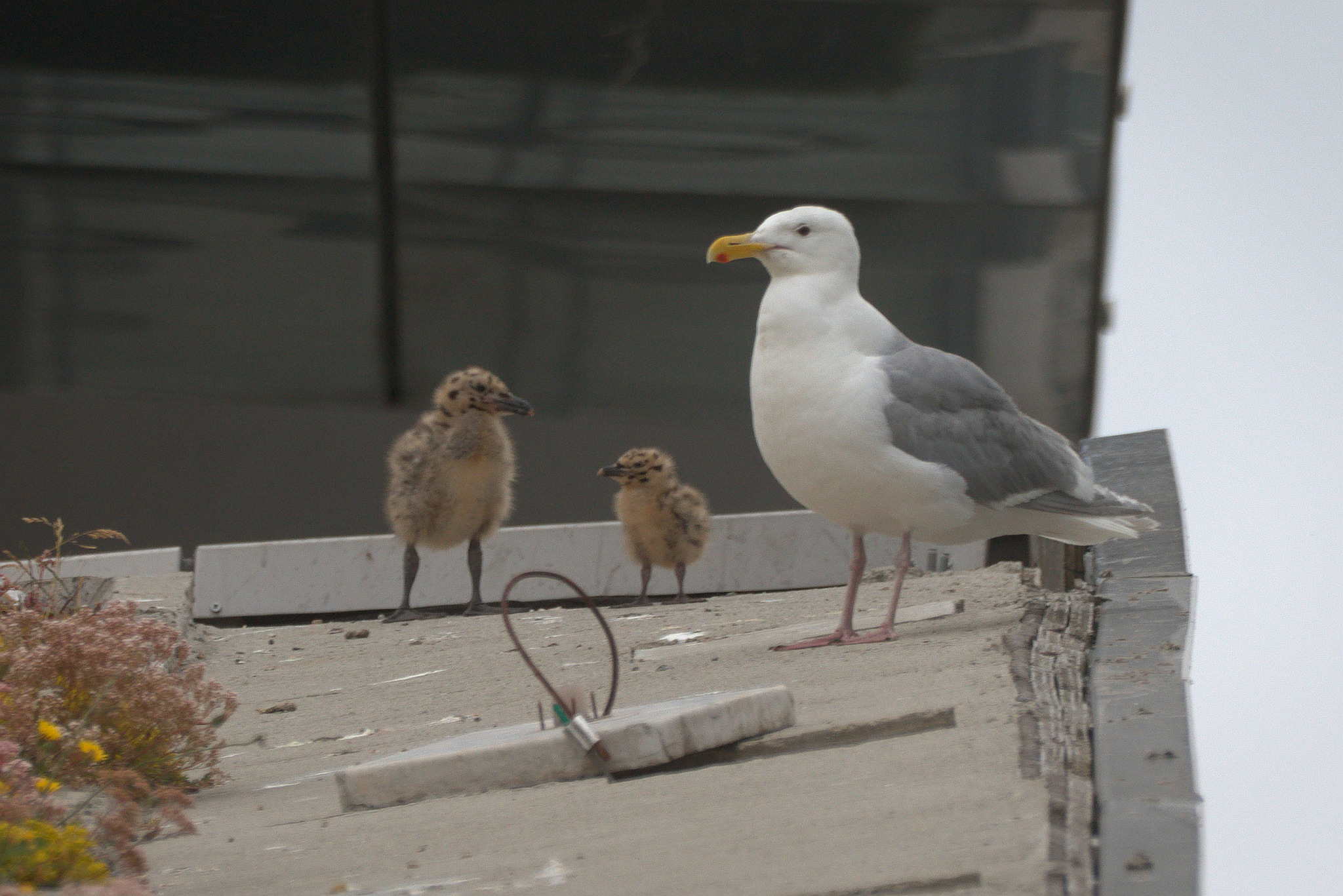