I’ll make this short and sweet.  A team of biologists from China have found, examining a fine-grained layer of fossils dated about 164 million years ago, a species of water boatman (“true bugs” in the order Hemiptera) that provide the oldest evidence for parental care in insects. The care is given by females, who attach their eggs to their second pair of legs. The curious thing is that in all the specimens examined, females attach the eggs to only their left middle leg: a rare example of “directional asymmetry”.

You can read about it by clicking below or downloading the pdf here.  The reference is at the bottom of the post.

Parental care is not that rare in today’s insects and other arthropods; you can see some examples in modern insects here. It’s also been seen in fossil insects, with the earliest cases described in the paper:

Among Mesozoic insects, the only two direct fossil evidence cases of brooding ethology are provided by the Early Cretaceous cockroach Piniblattella yixianensis with its oothecae enclosing eggs for protection and brood care; and the mid-Cretaceous scale insect Wathondara kotejai, which preserves eggs within a wax ovisac attached to the body of an adult female.

An ootheca is an egg mass, usually enclosed in a hardened shell, as in this modern cockroach (photo below). I assume the mother in the fossil species would stay with the mass, otherwise I can’t see this as an example of “brood care”: 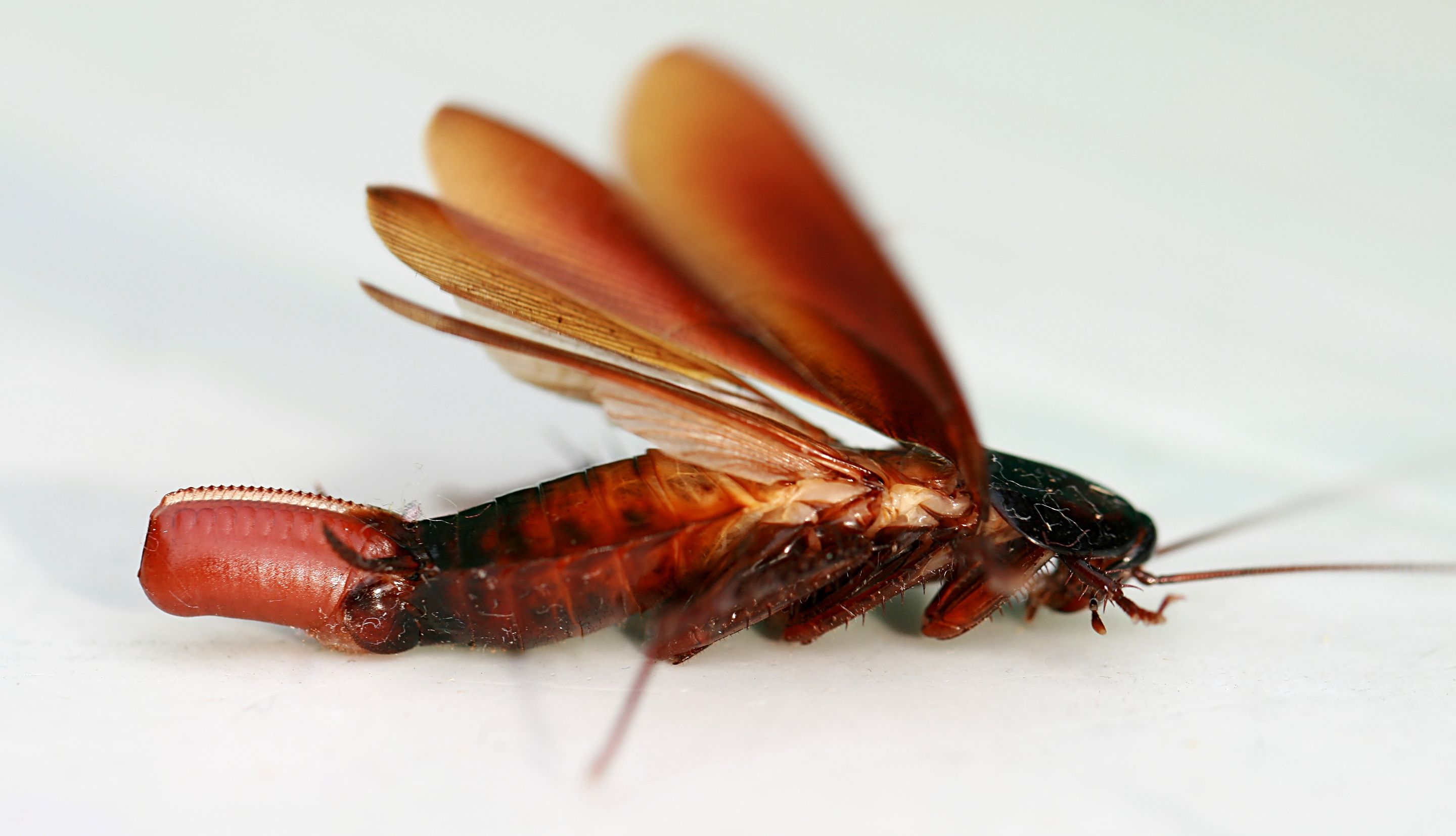 An “ovisac” is similar: a capsule containing eggs. In the case of the scale insect above, that’s clearly brood care because the ovisac was attached to the body. The Cretaceous period lasted from 145 to 66 million years ago; and oldest of these two insects having brood care dates to about 126 million years ago.

Now, from the Haiffanggou Formation at the Xiayingzi quarry, a formation in NE China with lots of ancient mammals, dinosaurs, and insects, they’ve discovered the water boatman Krataviella popovi. Fu et al examined 157 specimens, 30 of which were females carrying eggs on the middle segment of their LEFT foreleg. Note the directionality of this asymmetry. If it were random, the chance that 30 specimens would all have eggs on the left side would be 9.3 X 10-10.

The age of this formation is 163.5 million years, so the brood care in these boatmen precedes the previous ‘record’ by about 38 million years. It’s not a unique phenomenon in insects, but it’s the earliest example of that phenomenon.

Here are two photos of females carrying eggs (red arrows), both from the paper and both on their left side. The preservation is remarkable, with some of the specimens prepared using only a sharp knife:

Females and males can be identified independently of egg-carrying, so this is clearly a female trait.  Modern water boatmen often attach their eggs directly to the substrate with a kind of biological glue, and then leave, so there is no brood care. The authors hypothesize that the females in these fossil specimens were still using some kind of adhesive, but that it was used this way:

Since water boatmen eggs cannot adhere to new surfaces after being detached from their original place of deposition, this suggests that the females first secreted mucous substance and then laid eggs onto their own left mesotibia by specific bending movements of the abdomen, and then carried the brood until hatching. The unoccupied right mesotibia might have been used to maintain balance when swimming and feeding.

What seems unusual to me is the directionality of the trait: it’s only found on the left middle leg, never the right one.  This is called “directional asymmetry”. (If eggs were laid randomly on the left or right legs, it would be called “fluctuating asymmetry”.)

Directional asymmetry has fascinated me because, if it’s an evolved trait, it means that genes producing the directional trait “know” which side of the body they’re on. How can that be? If an ancestor already had biological or genetic gradients from top to bottom and front to back, it still means that a point on the right and left side with equal positions on these other two gradients would experience the same environment. So how do genes determine which side their cells are on so those genes can be activated differentially?  I’ve talked about this before, and you can read about it here, here, and here.  It’s a fascinating issue that’s not fully resolved. (Of course, once a genetic directional asymmetry is in place, it can be used as a developmental key for the evolution of further asymmetries. We ourselves have a fair number of such asymmetries.)

One solution, which just pushes the question back a bit, is to posit that the females have directionally asymmetrical ovipositors, and it’s simply easier to lay eggs on your left leg than on your right. But if the ovipositors and genitals are symmetrical (the authors don’t say), then it would probably be a directional behavioral asymmetry, with females behaviorally evolved to lay eggs on only one side. I don’t see the advantage of that, but of course behaviors can be directionally asymmetrical and conditioned by genes, like handedness in humans.  It’s still interesting to me that one of the earliest cases of directional asymmetry known isn’t discussed by the authors except to mention it. Their own big message is that this is the earliest case of brood care seen in insects, not that it’s directional.

Finally, what is the advantage of evolving this kind of brood care? I’m sure you can think of answers: having your eggs with you protects them from predators, and also aerates the eggs as the beetle moves through the water.  Or, as the authors note:

Karataviella adopted a strikingly similar brooding (egg-carrying) strategy to most marine and freshwater shrimps, lobsters and kin (Pleocyemata), where the females attach eggs to their pleopods using a sticky substance, allowing them to actively and intermittently adjust the position of the eggs in water or air, together with the movement during swimming that generates currents, to ensure ventilation and moistening of the eggs. Moreover, in K. popovi and some pleocyematans, a firm but elastic egg stalk is present and may contribute to the aeration of the eggs by facilitating regular shaking motion. Therefore, we speculate that the particular brooding behaviour of K. popovi effectively addresses the problems that large eggs experience relating to hypoxia, drowning and desiccation, resulting in enhanced offspring survival.

To close, here’s a drawing from the paper labeled “Ecological reconstruction of Karataviella popovi and anostracans in the Middle–Late Jurassic Daohugou biota.” What’s weird here is that all the egg masses are shown on the RIGHT mesotibia, and water boatmen do not swim upside down.  Go figure. 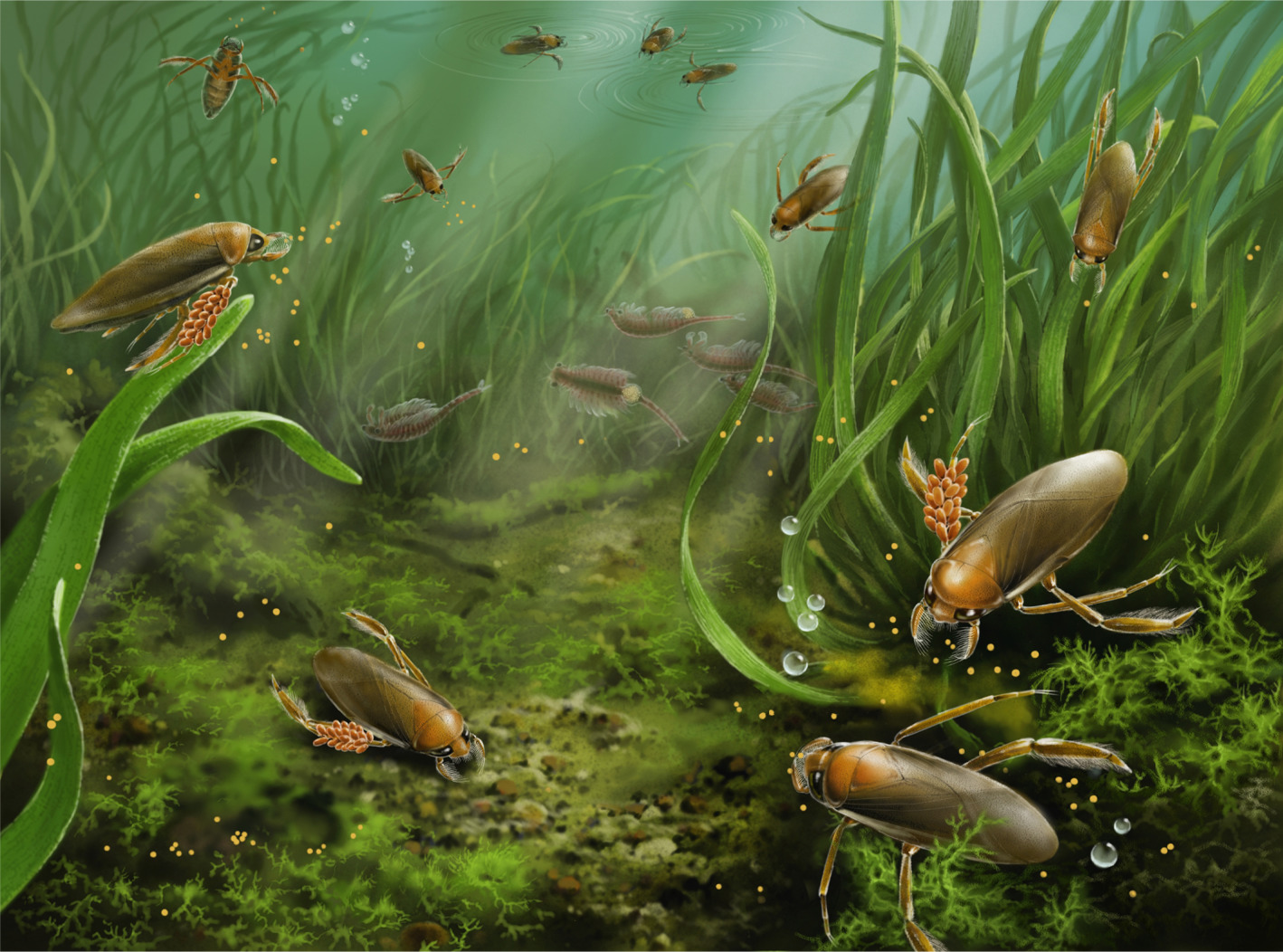 11 thoughts on “First fossil evidence for brood care in insects, and a remarkable case of directional asymmetry”