Look it up and learn some Yiddish!  I decided to go grocery shopping on Saturday instead of Sunday, as it was raining and the ducks were in hiding, so NO BREAKFAST FOR THEM.

The good bit was that because of the fairly heavy thunderstorms, the grocery store, which opens at 6 a.m., was almost empty at 7. Further, I did all my shopping in record time and got bargains on yogurt, bread, tuna, grapes, my weekly t-bone (a porterhouse, actually, since they were on sale), and chicken thighs. Total bill: $23 and change.  I breezed on through the store, and when I got to the checkout counter, I saw that there was only one guy ahead of me in the express lane, and he had only one item.

Then the bad news. Here’s how he paid: 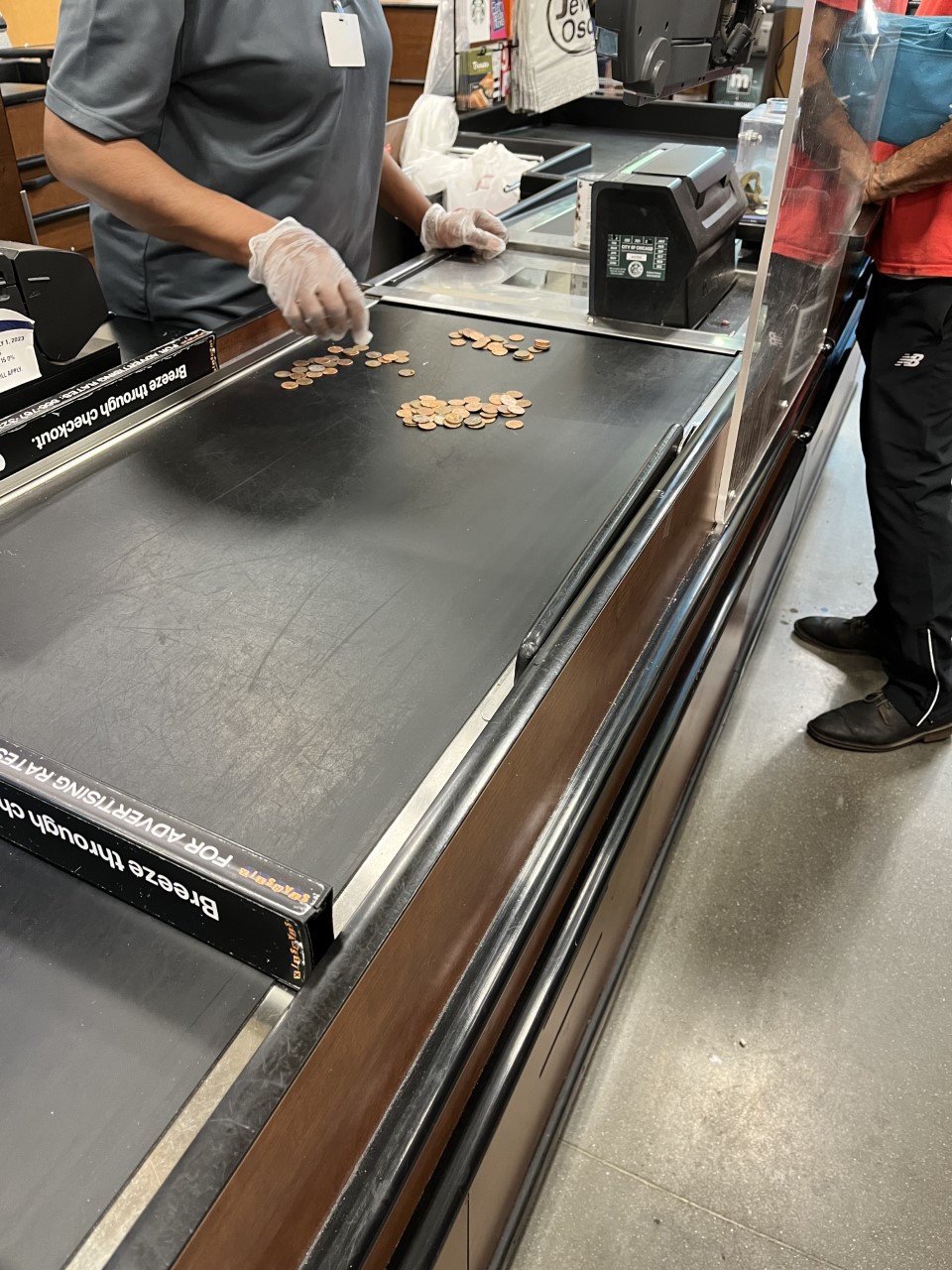 Yep, IN PILES OF PENNIES, which all had to be counted out and put into the till one by one. (It’s hard to pick them off the slippery grocery belt, too.) It took forever. Why didn’t the guy put them in rolls? (That’s what the cashier asked me when we chatted.) He must have been saving up for months.

I’m sure you know the feeling: it’s always the person just ahead of you whose debit card doesn’t work, and has to go rummaging through wallet or purse to get one. Or writes out an entire check (not pre-filled-out), with the checkbook first fished with difficulty out of a purse. Or doesn’t have enough money to pay, and has to decide which items to leave unbought at the counter.  Or has 30 items in a 15-item express line. If I were paranoid, I’d say that this guy knew I was coming, emptied his penny jar, and then found a way to get right ahead of me in line.

But of course that’s dumb. But it does seem that the slow people are always ahead of me. I think everyone must feel like that sometimes.

One more bit of tsouris. (I get to gripe because this is my site.) Above the first floor mailboxes in my department a pipe in the ceiling is dripping condensate, which fall into the office as well as the mailboxes, are set into the wall outside the office. (It can’t be fixed without removing the wall, so they’ve set drip pans inside the office. GUESS WHOSE MAILBOX IS DIRECTLY UNDER THE DRIP?  You got i!! Mine!  There’s nothing like reaching into your mailbox and grabbing a handful of soggy envelopes and magazines. No other mailbox has this problem. Fortunately, the lovely office staff moved my mailbox, so that one’s solved. But I’ll never get the time back that I waited watching the cashier count those pennies.

Oh, one more: it’s always when you’re in a hurry when your shirt catches on the door handle—and sometimes rips.

As my father used to say to me in (bad) Yiidish when I was a kid: “Tsouris mit mon”: “Troubles as numerous as poppy seeds”.

Feel free to have a Saturday vent below. Tsouris mit mon!