This is the fifth book I’ve read by Kazuo Ishiguro, who in my view has a strong claim to be the finest novelist writing in English. That’s unusual because his first language is Japanese, yet, like Joseph Conrad or Isak Dinesen, he’s overcome whatever strictures his first language imposed to become not only unrecognizable as a non-native speaker of English, but to excel even among writers. In Ishiguro’s case, this may come in pat from his moving to England when he was about five, and he’s visited Japan only sporadically since then.

Ishiguro was awarded a Nobel Prize for literature in 2017—before this book come out. (I recommend listening to Ishiguro’s wonderful 45-minute Nobel Prize lecture here.)

I was, as you know, trying to read all the Booker Prize novels I haven’t read, which are many, but I took a break, on a friend’s advice, to read Klara and the Sun (2021), Ishiguro’s latest novel.

At any rate, of the five Ishiguro books I’ve read, two are great masterpieces (The Remains of the Day and Never Let Me Go), and this book, which was nominated for a Booker Prize but didn’t win, is very great but not a masterpiece of world literature. It comes close, though, and I recommend it very, very highly. (By the way, if you haven’t read the two I recommended above, do so immediately, and then go watch the movies made of both. The movies are fantastic; I actually saw both before reading the books, and the disquieting film Never Let Me Go is what got me onto Ishiguro.

In the short video on the Amazon Page, Ishiguro touts his book almost reluctantly, but does say this:

It’s probably not inaccurate to say that Klara and the Sun is positioned in terms of its imaginary world and its approach somewhere midway between Never Let Me Go and Remains of the Day.

You can (and should) order the book; the screenshot below goes to the Amazon page: 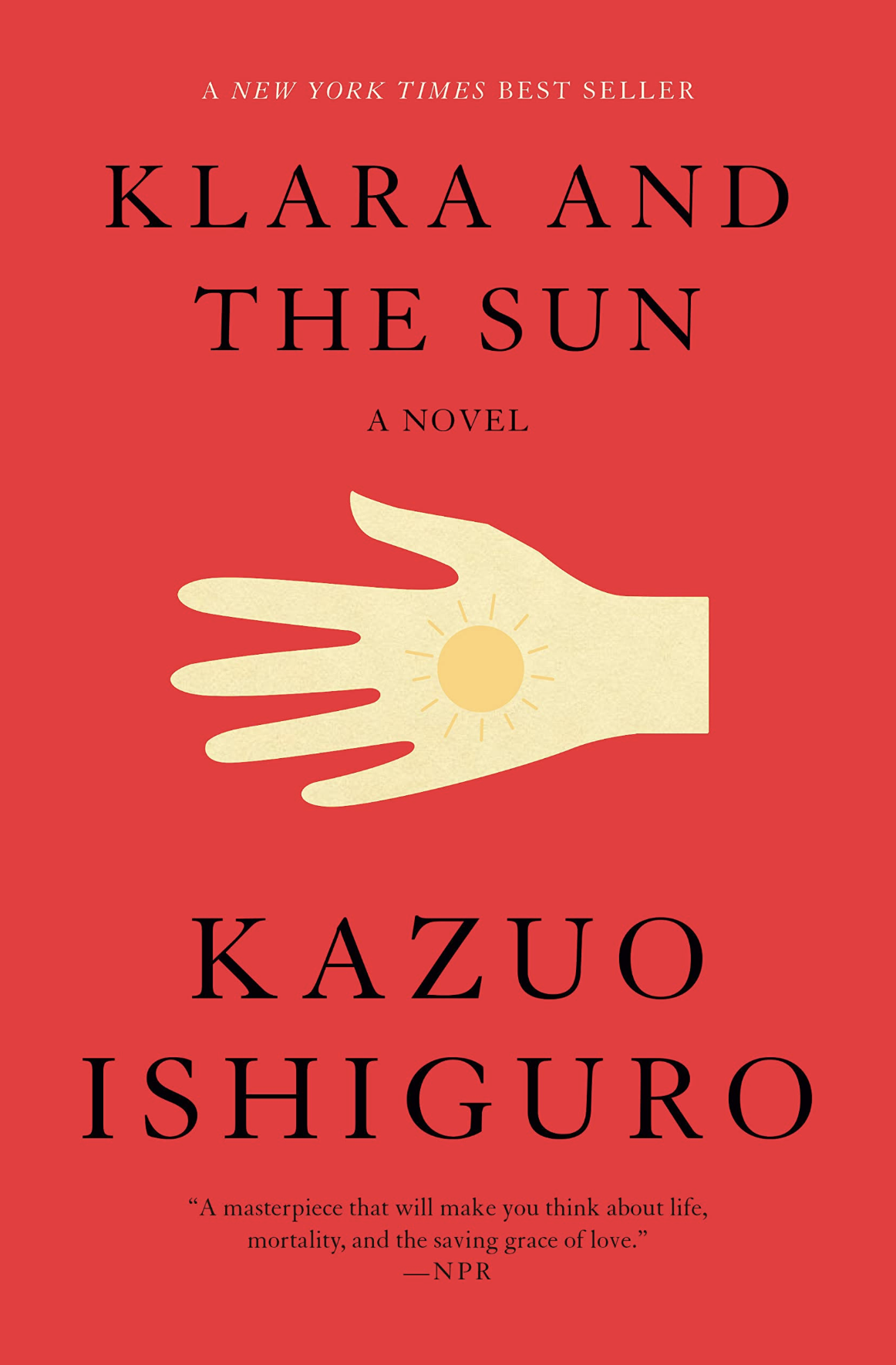 I don’t want to recount the entire plot, which would reveal many spoilers (you can see it on the Wikipedia page), but I do want to say a few things. Why is it positioned between those two books?  The subject and narrator of the book is a “robot”, an “AF” (artificial friend) named Klara. She is purchased by the mother of Josie, a chronically ill teenage child, to be Josie’s friend and prepare her for college. (AFs were made in this tale to relieve loneliness.) The story, like that of Never Let Me Go, takes place in a not-too-distant dystopian future, and the first-person narration, as in The Remains of the Day, is also presented by a servant (in this case the AF, in the other book the head butler), both of whom come to realizations about life and humanity during the story.

Because the narrator of this book is an AI in a presumably humanoid body (Klara has hair, legs, and other organs, but they’re never explicitly described), the language used is simple, the way a newly made and naive robot entering the world would have written. Moreover, Klara doesn’t perceive her surroundings the way humans do: she is so constructed that most of the time she sees the world as a series of boxes in which separate images appear.  As the book progresses, you learn more and more about what’s going on, just as you do in Never Let Me Go. There is, for example, the practice of being “lifted”, which you must undergo to go to college, but only halfway through the book do you learn what that means. And Klara learns more and more about humans and her environment; before being purchased, she’d been awaiting a customer in an AF shop.

There are many themes of this book, the main one being Klara’s attempt to understand what it is to be human, and especially to be Josie. Klara obviously was instilled with some “feelings”—or simulacra of feelings like empathy (don’t ask me how) in the factory, but the subtleties of human emotion have to be learned over time. Fortunately, Klara is a keen observer, and at the end of the book reviews her experiences and what she’s learned. It’s not clear that she has real inner experiences—though it seems she does—or whether her AI program is just being updated.

The main emotion she can’t master is love, and she’s always inquiring of Josie and her paramour, Rick, if they are in love. I’ll leave the resolution to you except to say that the book, although it could be considered science fiction, is an absolutely serious novel that inquires “What does it mean to be human?”  Klara is also religious in her own way, worshiping the Sun as a god because she herself apparently runs on solar power. She thus attributes the healing power of the Sun to everything, and has her own form of paying homage to it, and even some prayers to the Sun. This plays a crucial role in the book.

The rest I leave to you so you can have the great pleasure of reading this short book (about 310 small page). I give it two thumbs and two big toes up. Of all the dreck on the market today, this stands out. As I said, it’s not a classic novel, but it comes damn close.

Here’s an 8½-minute video of Ishiguro talking about this book, noting that it started as a children’s book (and was inspired by picture books for children), but quickly expanded into a novel dealing with artificial intelligence.

24 thoughts on “Books: “Klara and the Sun” by Kazuo Ishiguro”