As you know, we have a spate of new words for “woman” or “women”, all devised to either efface the distinction between biological women and transwomen, or to include transmen (many of whom still have male genitals, have periods and can bear children) together in a group with biological women.

If you say, “trans women are women”, then you are forced to make up new words to refer to biological women who are physiologically and reproductively different from tranwomen. So far these words have included “people who menstruate”, “chestfeeder”, “womxn” and others I can’t recall.  Yet the activists haven’t seemed to settle on one word that fits all.

Lately they’ve added a new one as a euphemism for “biological women + transmen who can have children”. This was brought to my attention by Nellie Bowles, whose Friday weekly summaries on Bari Weiss’s Substack site are both informative and snarky.

Here’s from her latest summary (her emphasis):

New slur for women arrives: “Womb carriers.” You have to hate women a lot to refer to Native American women who suffered horrific abuse as “womb carriers.” Verso Books, the ultra-trendy Brooklyn publisher and cultural hub, brings us the latest slur for females.

Because nothing really disappears on the Internet, I found the Verso tweet, which they’ve apparently removed because so many people mocked or criticized the usage. Yes, the sterilization and forced adoption (as well as forced away-from-home schooling) of Native Americans in Canada and America are well known, and are reprehensible and immoral. The problem is with how “women” are semantically described. I’m wondering what J. K. Rowling will have to say about this. What you can’t deny is that “womb carriers” is simply a synonym for “biological women”. 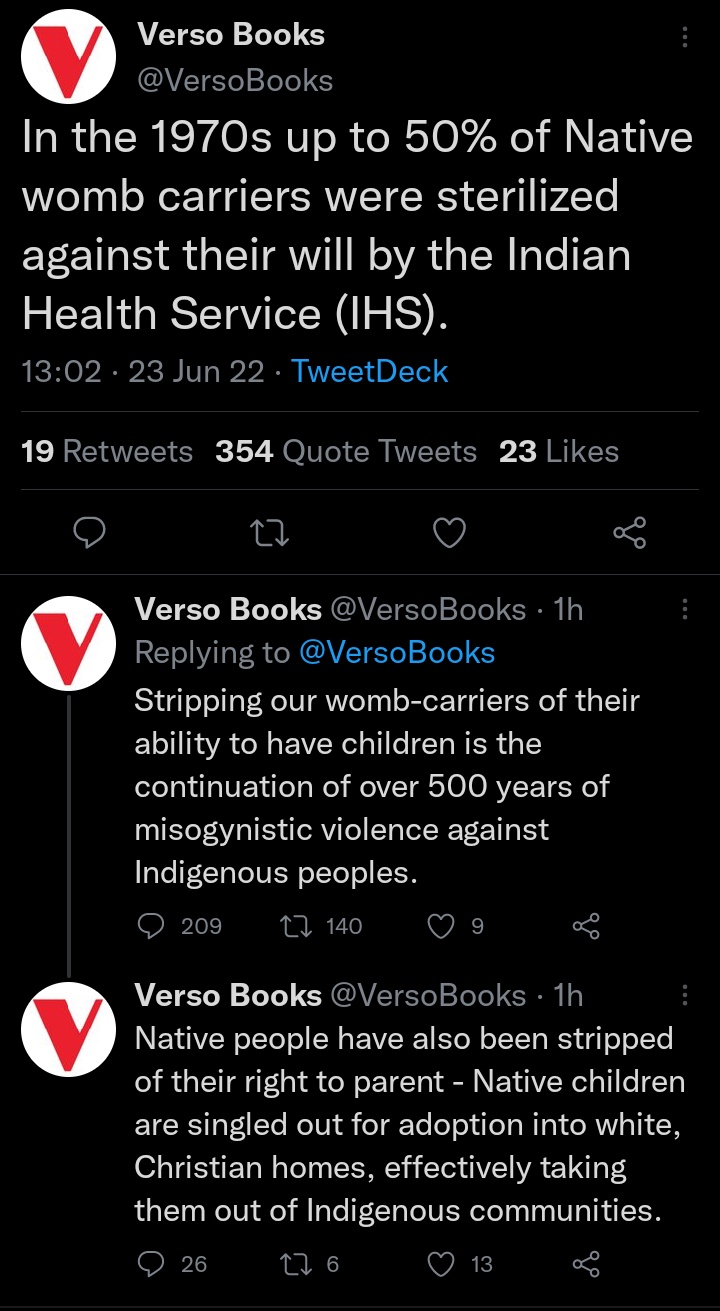 Speaking of “womxn“, Bowles also reports there’s a controversy about how to pronounce it (I had the same issue with “Latinx”.) The word was, I believe, introduced by feminists to take the word “men” out of “women” or “man” out of “woman”, but now is also being used to include transwomen.

For some dark humor, take a look at University of California, Irvine’s Womxn’s Center, a publicly funded institution now debating how to pronounce womxn. So as not to leave out the blind community who can’t see the X, the new thinking is: “say it as wom-inx or woma/en-x, or wom-ux.” Wominx. Womux. (h/t Aaron Sibarium)

I never say either word, preferring “Hispanic” to “Latinx”, and I don’t think it’s in me to say “womb-carriers.”

Some humor brought to our attention by reader Jez:

A real gentleman offers to carry a lady’s womb for her. He at least opens the door for her if she’s struggling with it.

59 thoughts on “Yet another word for “women””