Yesterday I mentioned that a mother mallard and her new brood were spotted in the bushes across the sidewalk from the Oriental Institute—several blocks from the pond. Later I was told they had crossed University Avenue heading east, and my heart sank. As Greg mentioned yesterday, and is well known to duck experts, mothers have a very good sense of direction to the nearest pond or lake, and the ducklings can walk long distances. I hoped against hope that the brood was not making their way to Botany Pond, where Audrey and her brood would surely kill them. My idea was to catch the babies before they got to the Pond and get them rehabbed, for the pond is a site of death given Audrey and her Murderous Ducklings.

On my way home I looked for the ducks, but couldn’t find them. It turned out that they were already making their way to the pond, undoubtedly following the mother. For as soon as I got home and started making dinner, I got an email from a student that some kind of kerfuffle, including duckling carnage, was going on in Botany Pond. I immediately knew what happened.

The mother had led her brood along this path from the Oriental Institute, crossing University Avenue, and walked along the buildings on the north side of the Quad, making a hard right and heading to the pond. Here’s a crude map of their route as best I can judge. The Oriental Institute is across the street at the extreme right, so the mom and babies would have had a walk of between 2 and 3 city blocks. 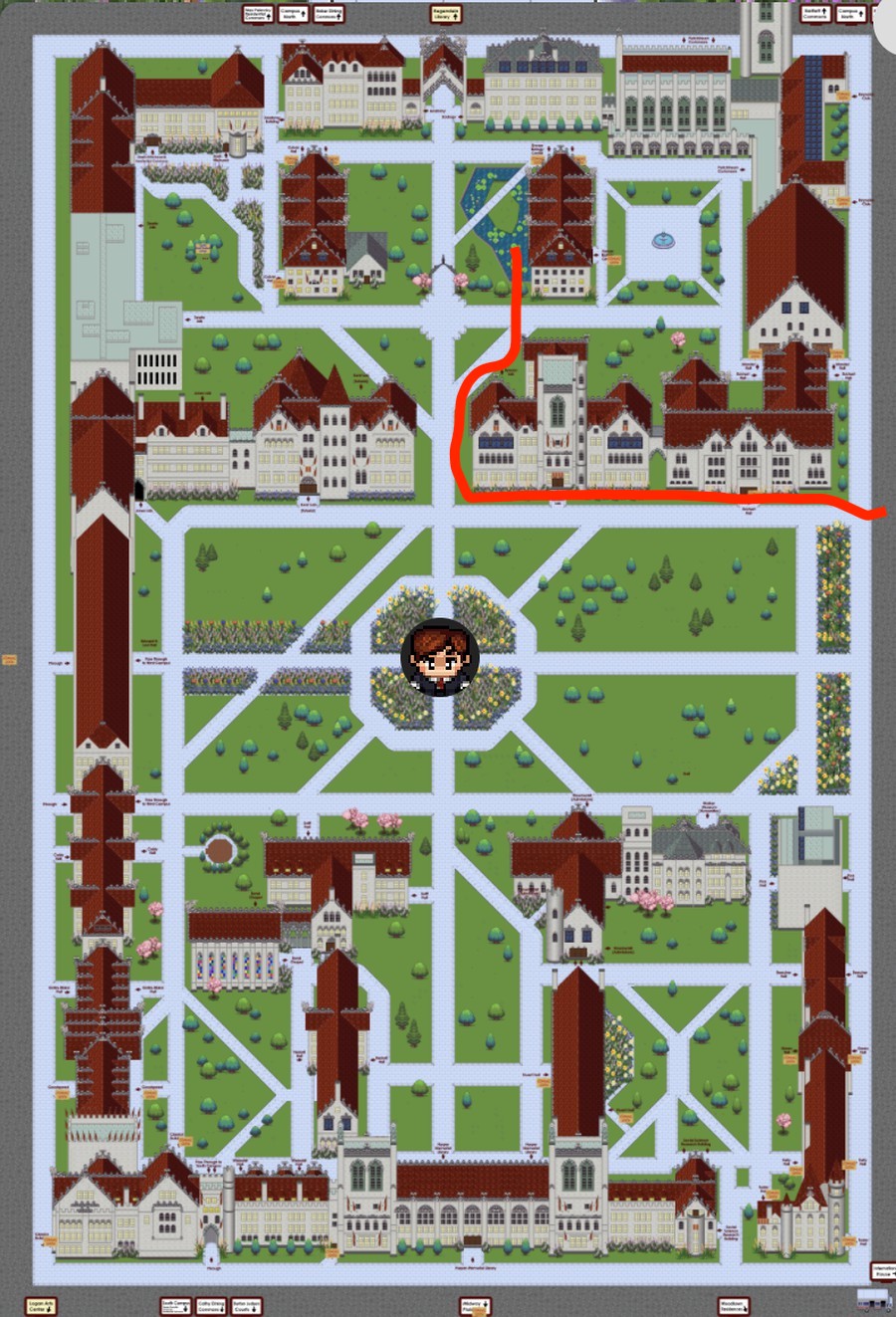 I immediately grabbed my net and duckling rescue box (cardboard, lined with paper towels, and in the 100° F (38°C) heat ran back to the pond, normally a 10-minute walk. On the way back I ran into a woman walking the other way, who asked me, “Are you going to rescue the ducks?”  She was very worried, having seen the carnage in the pond. (I was told that Audrey had grabbed one of the new ducklings by the neck and flung it ashore, and other babies were getting attacked.) I responded “I’m sure going to try.” She came with me to the pond and turned out to be one of the several rescuers who pitched in to help.

When I got to the pond, there were people everywhere, all horrified by what was going on. Several asked if they could help, and I said “sure”. I went upstairs and got three nets, including a large butterfly net (h/t Marcus Kronforst) and two Drosophila nets, as well as an extra box and a roll of paper towels to dry any rescued ducklings.

It turned out there were ten babies, and Audrey and her own ducklings were going after them like gangbusters. The new ones would surely all suffer a horrible death, and I didn’t hesitate: I decided to rescue them if I could (removing them from mother), and take them to rehab.

A guy and a girl both volunteered to go into the pond to get them, and, as I now am recovering from three successive cases of swimmer’s itch from three rescues (one nearly gone, one in full bloom, and one just starting), I told them. “You can go in only if you know the possible consequences.” And I told them about swimmer’s itch and the muddy pond bottom.

They didn’t hesitate a minute. While I rescued the injured duck, floating on the water but still alive (I don’t think he’ll make it), the pair of volunteers grabbed a net and went into the pond. The guy stripped to his skivvies and I carried his clothes back to safety on the plaza, while the woman, wearing shorts, just waded in with a fly net.

And one by one, we set up a Duck Rescue Team. The two in the water went for the other 9 ducklings, one at a time.  Three women on the bank set up two boxes for the ducklings, both lined with paper towels. And I gave them another roll to dry off the caught babies.

And so, over about a half hour, the two in the water managed to collect every one of the other nine.  The babies were hot, wet, and exhausted, and some, caught against the bottom, were covered with mud (I rinsed them clean). As each duckling was caught, I ran around the pond to retrieve it from the net and run it over to the Duck Dryers and Duck Boxers. This is one time I didn’t have to go into the water, which was fine as I was about 4-5 decades older than the two volunteers!

I have to say that everyone was extremely helpful, taking care of the babies, pointing out loose ones, and gently drying the caught ducklings as per my instructions and placing them in the boxes. The group of onlookers around the pond, once informed about why we were doing this, were elated at every capture, and so was our team.

In the end, we got all ten, though the injured one looked to be in bad shape.  I took a quick picture and then, with the help of one of the Duck Dryers, I immediately drove them the few blocks to the Chicago Bird Collision Monitor (CBCM) lady, who agreed to take them in and get them rehabbed at Willowbrook Wildlife Sanctuary.

As you can imagine, I had no time for videos or movies; getting those babies before they were killed was priority #1.  They were put in one box, and appeared to be in good shape but were exhausted after their long walk in the head, the attacks they suffered, and then being chased (during which they dive underwater). But here they are below, all in a huddle.

Everybody on the impromptu team—a mixture of students, instructors and a poet (the guy who went into the pond)—was delighted. We had captured every baby, though the mother flew away. But they knew, having seen the carnage, that we were doing the right thing.  Only I felt a bit low, for I HATE splitting up broods and going through the trauma of attacked babies and freaked-out mothers. I wouldn’t do this if the broods could coexist, so I watched the pond for a short while before we did any rescuing, just to see if it were possible Audrey’s brood could get along with the new one. No dice: she kept attacking the new brood, and so did Audrey’s own ducklings, who have obviously been trained to go after strangers.  We had to do a rescue.

I suspect that nearly all of these will live, though I’ll never know. All I know is that Willowbrook and its rehabbers do a terrific job getting a newborn ducklings through to becoming mighty mallards, and I thank the volunteers and the hospitable Dorothy from CBCM, who takes in our rescues.

I wish I could be happier, knowing that a team of strangers came together to save lives, but I’m still freaked out by this. And there may be one more brood to come, as a nest was spotted on a nearby building.

By the way, I did not get the name of the woman who went into the water. If you are her, or know her, please have her contact me so I can thank her properly and send her a photo of the lives she helped save: 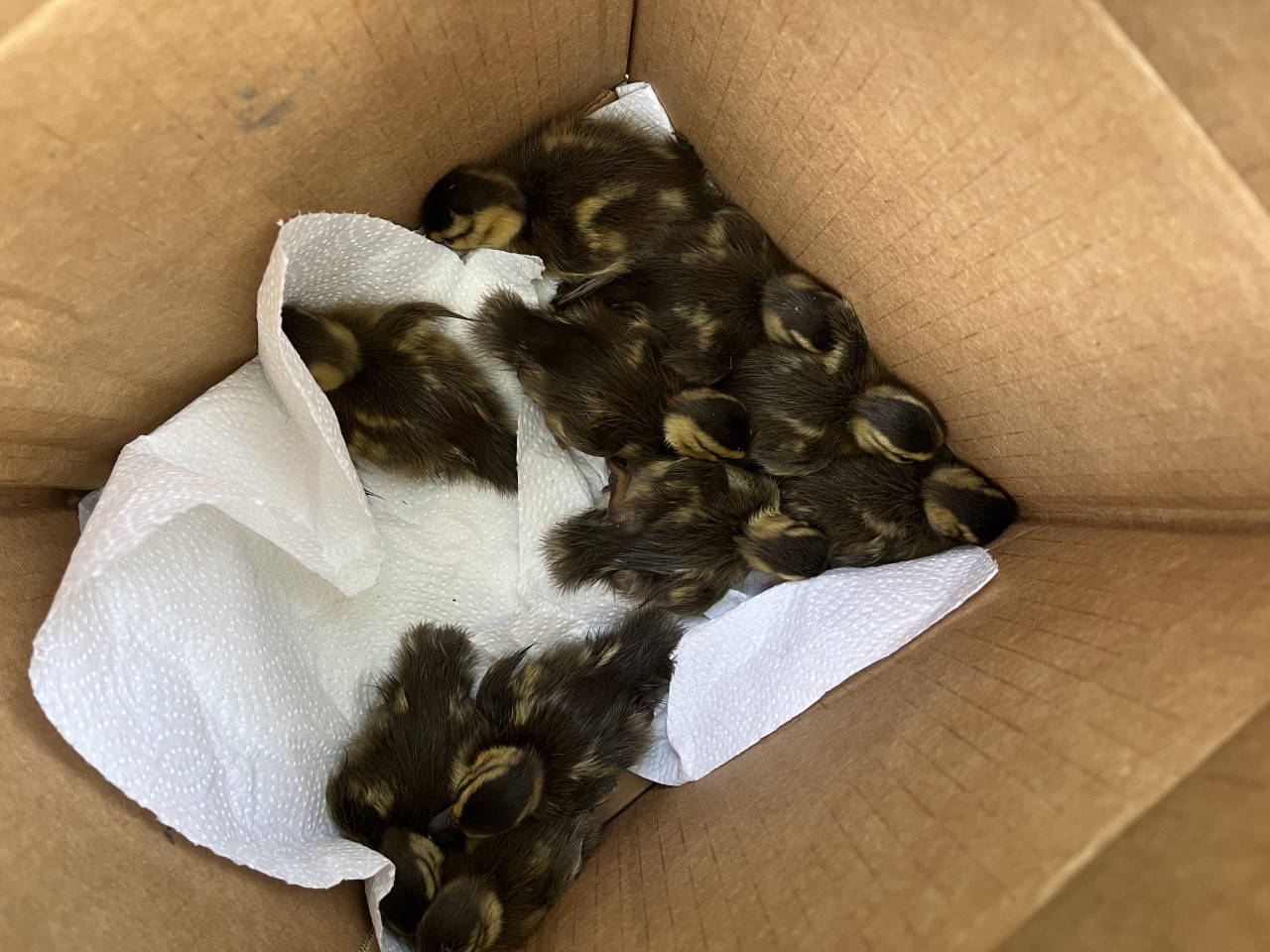 h/t: Maxine, Justin, Alia, and several other people whose names I didn’t get.

15 thoughts on “A duckling rescue in the heat”