This is the subway equivalent of blaming a woman for getting raped because she wore “provocative” clothing. According to VICE and The Toronto Star, a young woman named Shamsa Al-Balishi was waiting for the subway at the Yonge-Bloor stop in Toronto when she was pushed onto the tracks by another woman, identified as 45-year-old Edith Frayne.

According to court documents, Al-Balushi fell several feet off the platform and onto the tracks, before she rolled over until she wasn’t on the tracks themselves. She screamed, as did onlookers, while they could hear the subway travelling in the distance, the documents say, and the train slowly pulled into the station and Al-Balushi was stuck beside the train as it rolled in. According to the documents, she had to wait 30 minutes before she received help.

Al-Balushi suffered multiple injuries from the incident, including a broken rib, neck and back pain, bruising and contusions throughout her body, and trauma, anxiety, and depression. She’s currently unable to work.

Frayne was arrested for attempted murder. Al-Balishi, however, is suing the Toronto Transportation Commission (TTC) for $1 million for multiple cases of negligence, “including the failure to implement adequate safety measures, respond to the emergency promptly,  stop the subway train from driving onto the platform, and give emergency services access to the tracks to save her.”

Now I don’t know if Al-Balishi has a case here. You can’t stop a subway train on a dime, very few subways have any barriers beyond the yellow line, and I’m not sure what “emergency services access” means.  And surely the TTC has a right to defend itself, as it did against some of the charges above.

Unfortunately, it chose another way to defend itself, involving, shall we say, “bad optics”:

In its statement of defence, the TTC maintains that Al-Balushi is herself responsible, at least in part, in addition to the assailant.

According to the TTC’s statement, Al-Balushi “failed to take reasonable steps and precautions for her own safety and protection.” The statement says “she chose to stand close to the edge of the platform,” “failed to pay due care and attention to her surroundings,” and “was travelling alone and unassisted on public transit when she knew or ought to have known that it was unsafe for her to do so.”

WHAT?  Traveling alone and unassisted? A young vigorous woman should know that that was “unsafe”? At 9 p.m., when the accident occurred? Is the TTC suggesting that, as in some Muslim countries, women can go out only when accompanied by a male relative?

The Star adds this:

In its defence, the TTC says Al-Balushi failed to take reasonable steps and precautions for her own safety, including by standing on the yellow tiles at the edge of the platform and failing to pay attention to her surroundings.

Here’s a screenshot; Al-Balushi is clearly not standing on the yellow tiles the attack begins, but is shoved onto the yellow area and then down onto the tracks. 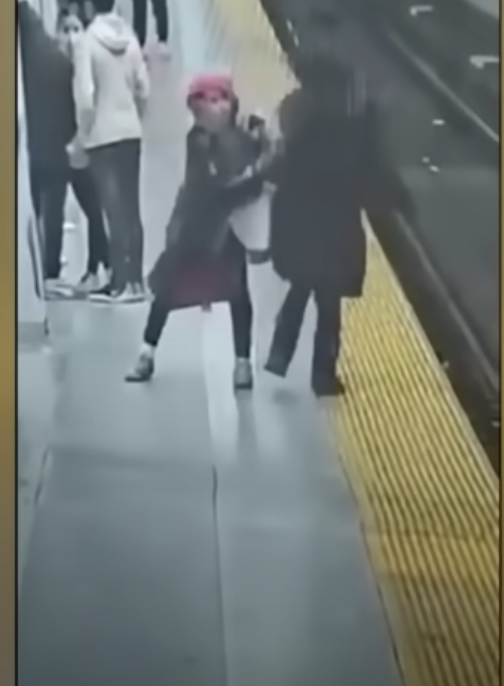 If I were a Canadian judge or jury, I’d have to go by Canadian law, but I have to say that blaming the victim for traveling alone and not taking proper precautions would anger me.  Is there a way to get damages simply because the prosecution makes stupid statements? I don’t think so.

For some reason this bothered me more than the usual blame-the-victim scenario because of its arrant stupidity and, indeed, lies, so I tweeted at the TTC (below). I doubt I’ll get a reply.  If you want to, the handle for TTC customer service is @TTChelps. 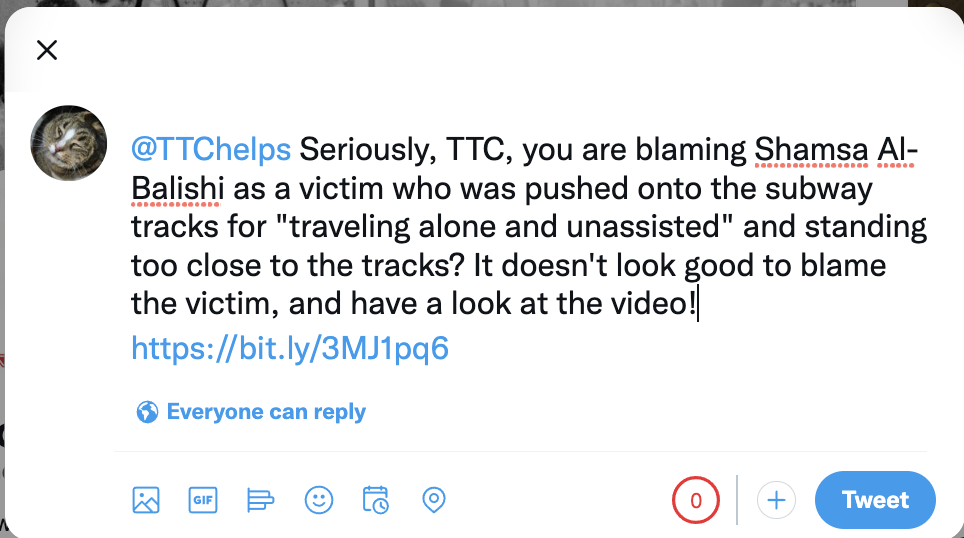