Today we have a batch of lovely butterfly photos from reader Ruth Berger. Her notes and IDs are indented, and you can enlarge the photos by clicking on them.

I am sending an unspectacular collection of Palearctic butterflies today. All photos taken in Frankfurt, Germany, in the vicinity of the mostly defunct chemical industry near the Main river, with a small 28mm automatic camera. I’ll start out with the one butterfly every European knows, almost the only local species that comes close to tropical butterflies in flashy beauty, Aglais io, the peacock: 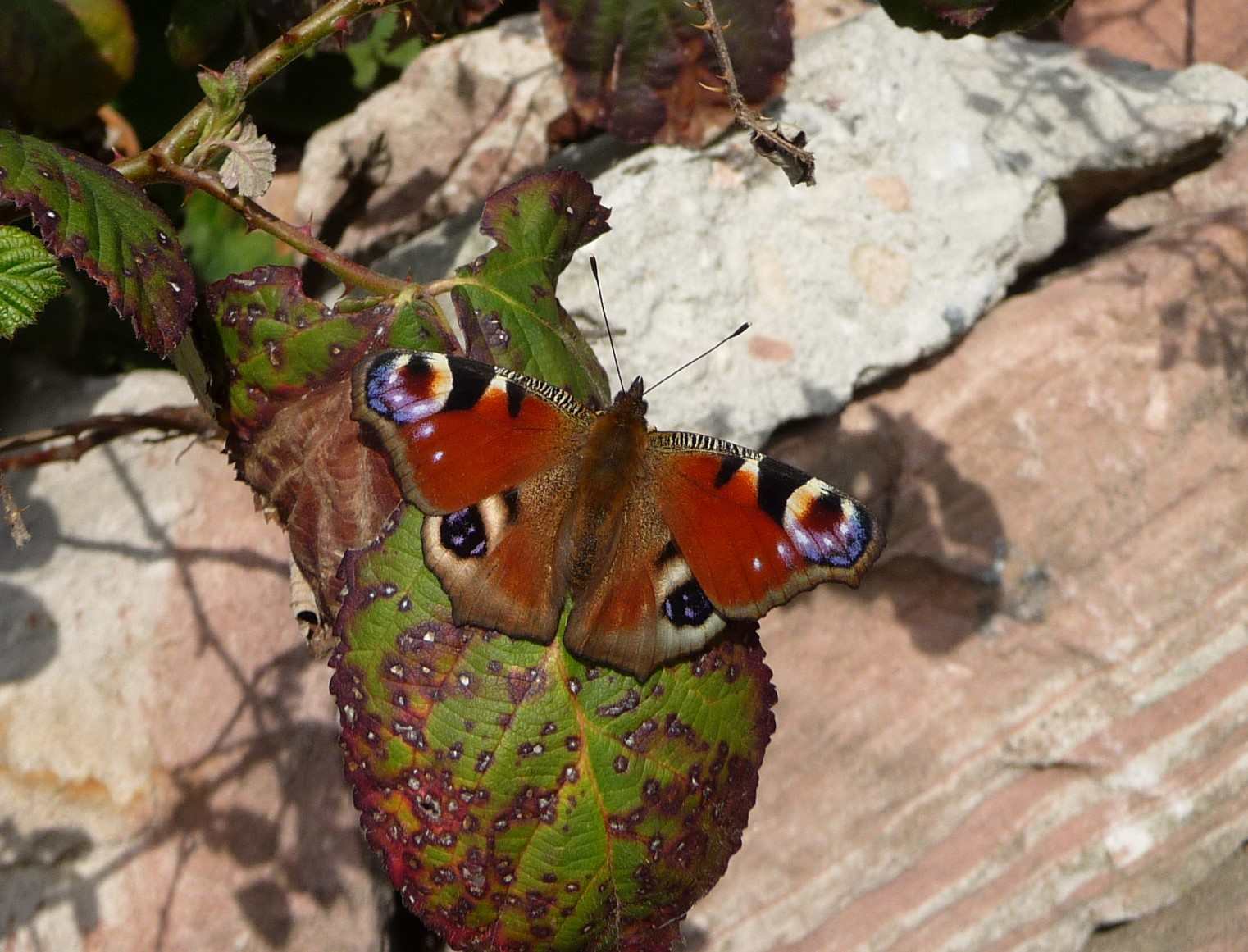 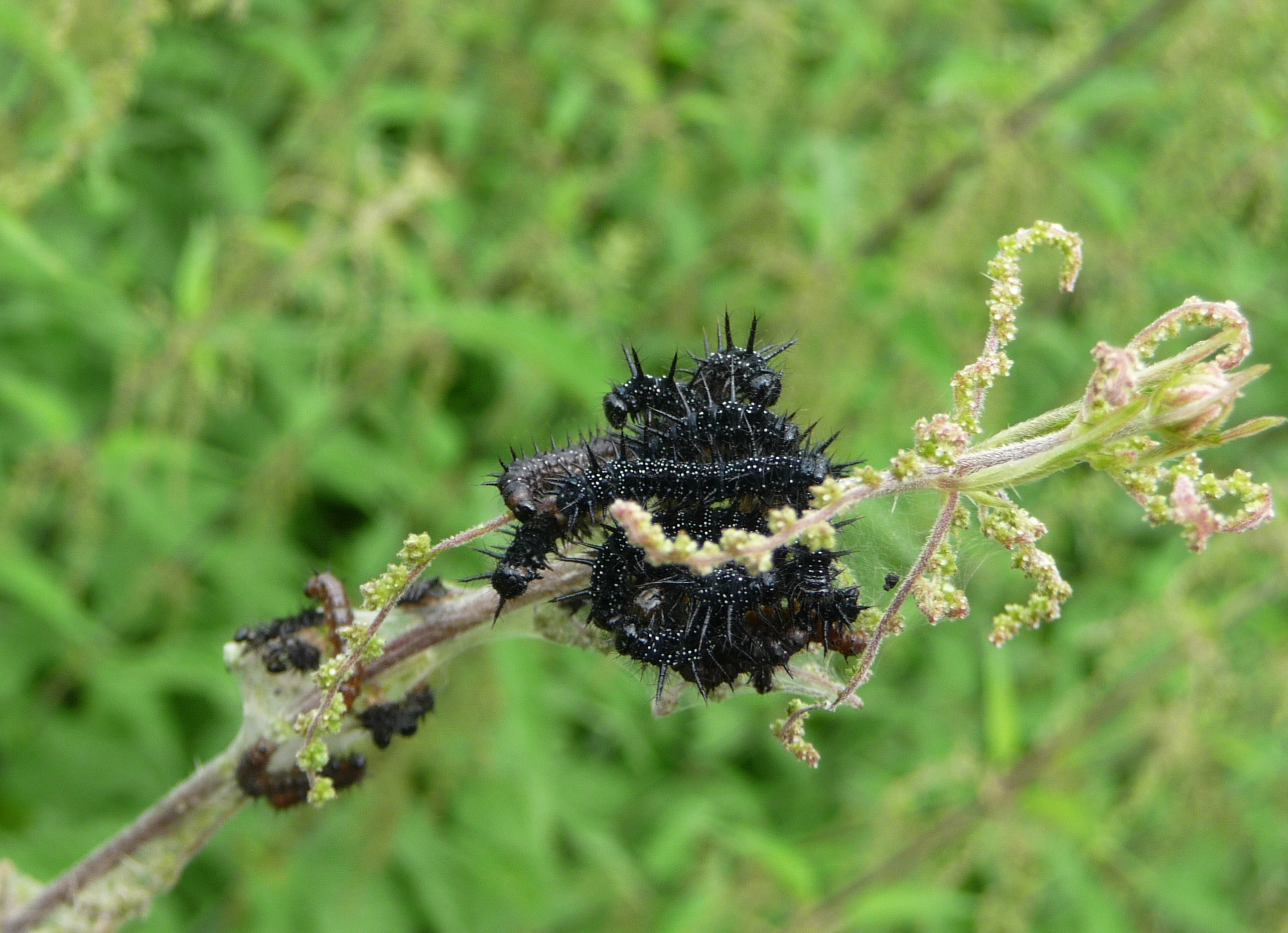 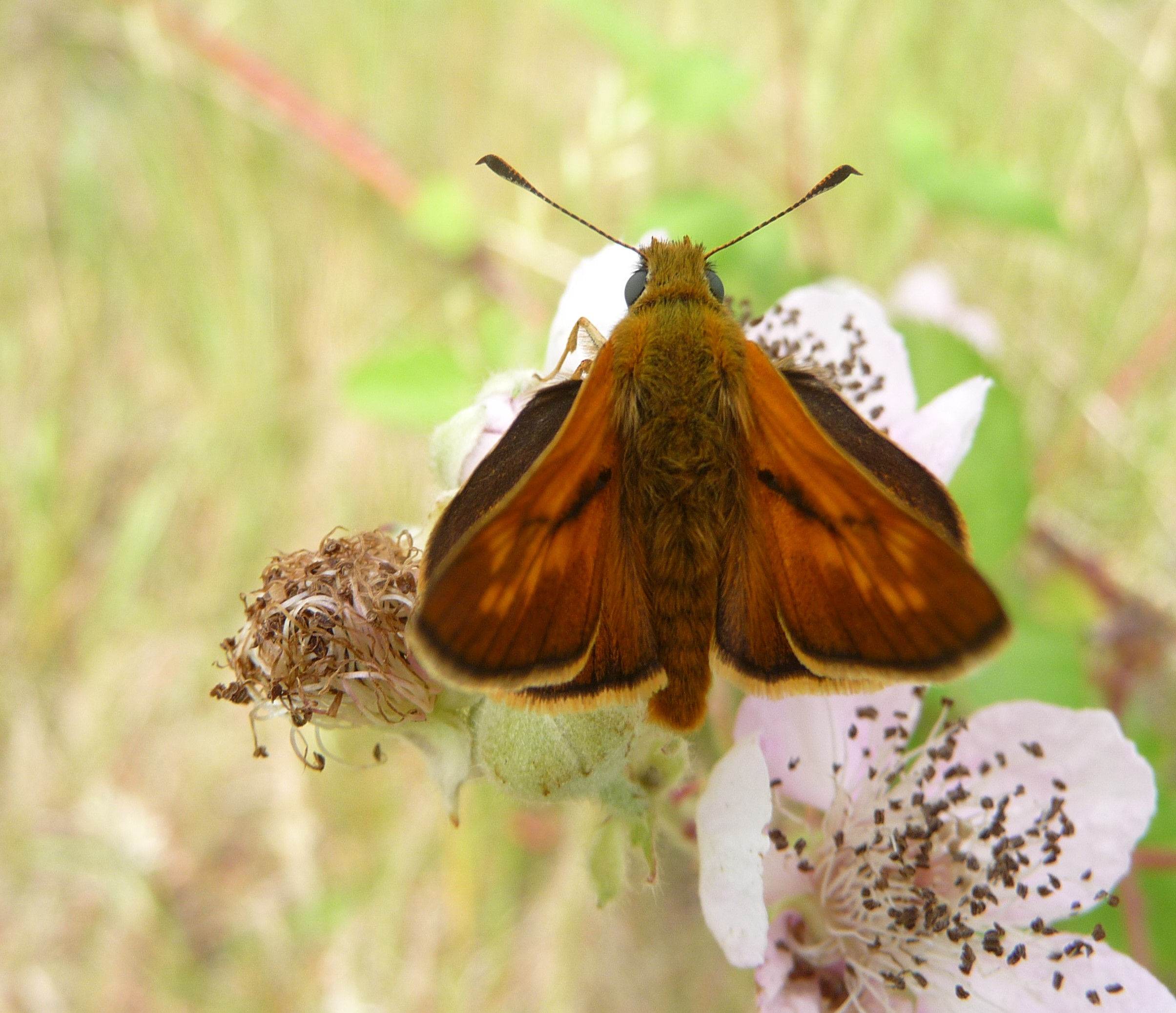 Two paces further along the clearing, I saw this one. It’s Melanargia galathea, fittingly called chessboard butterfly in German [JAC: “Marbled white” in English], but seems to have no common name in English. Like Ochlodes sylvanus, it needs unmowed grassland to thrive. 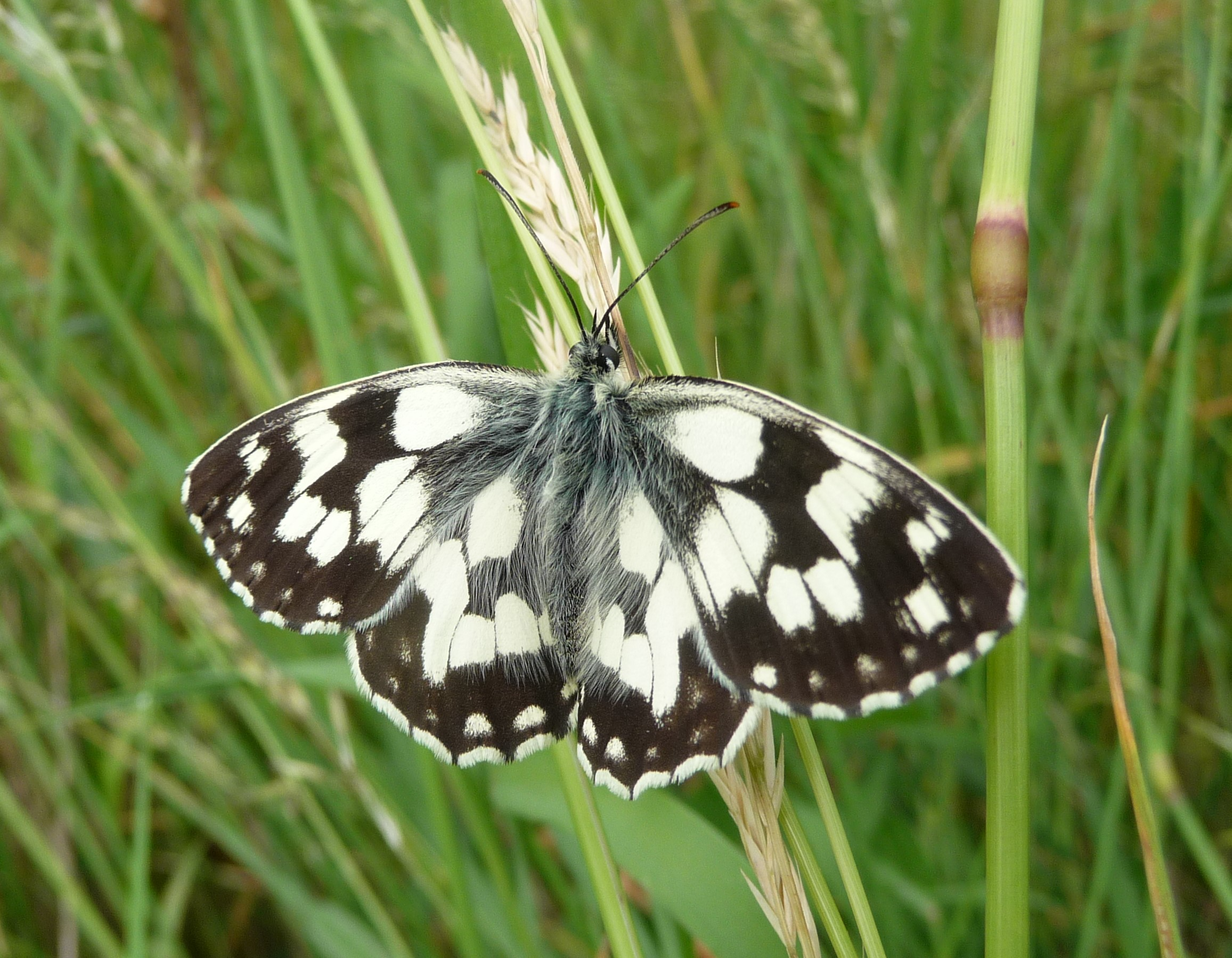 Its less pretty woodland “sister species”, metaphorically speaking, is Palarge aergeria, the speckled wood, “wood boardgame” in German. I have only a smartphone picture of that one, even though it’s more frequent here than the grassland Chessboard: 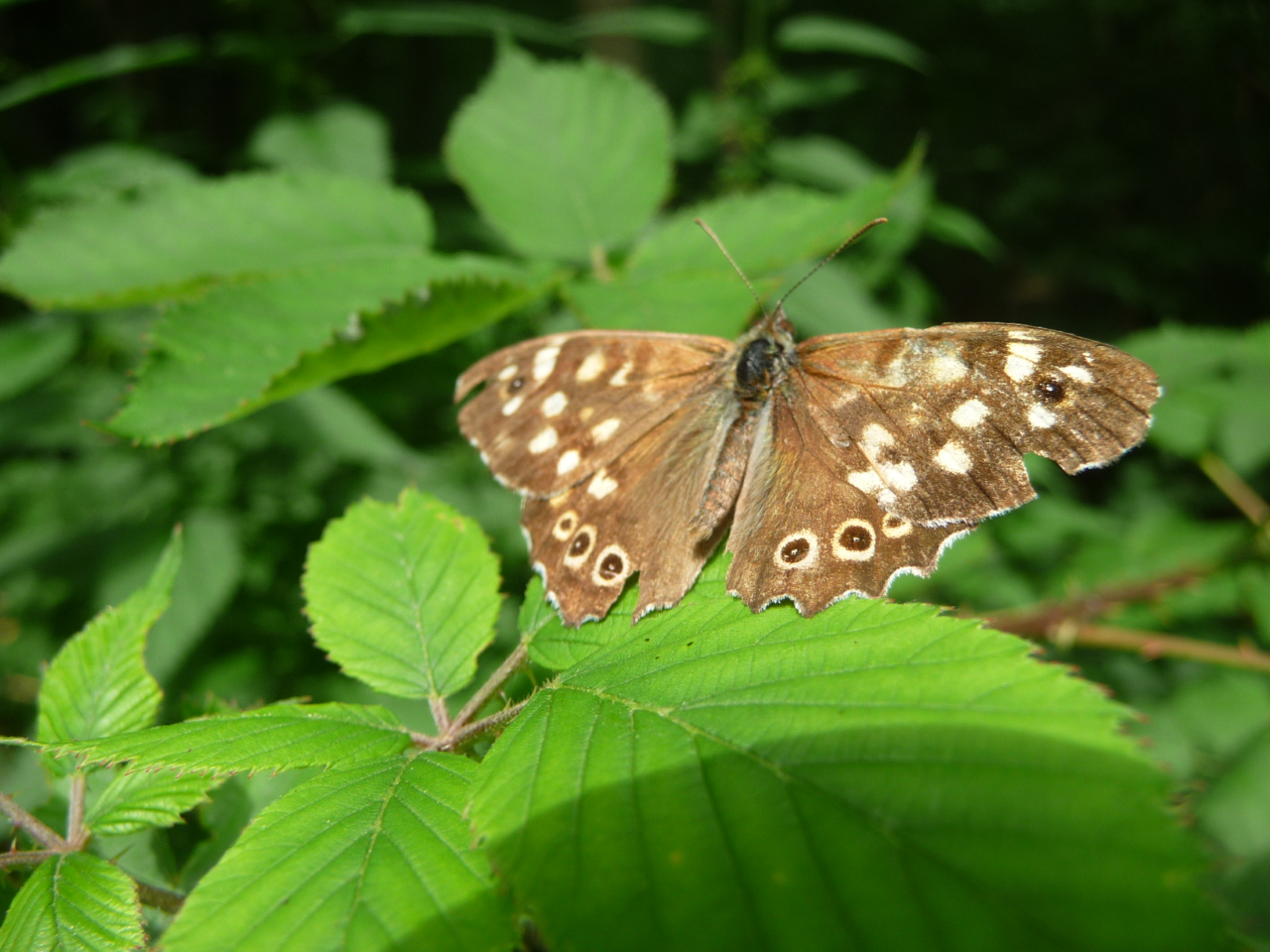 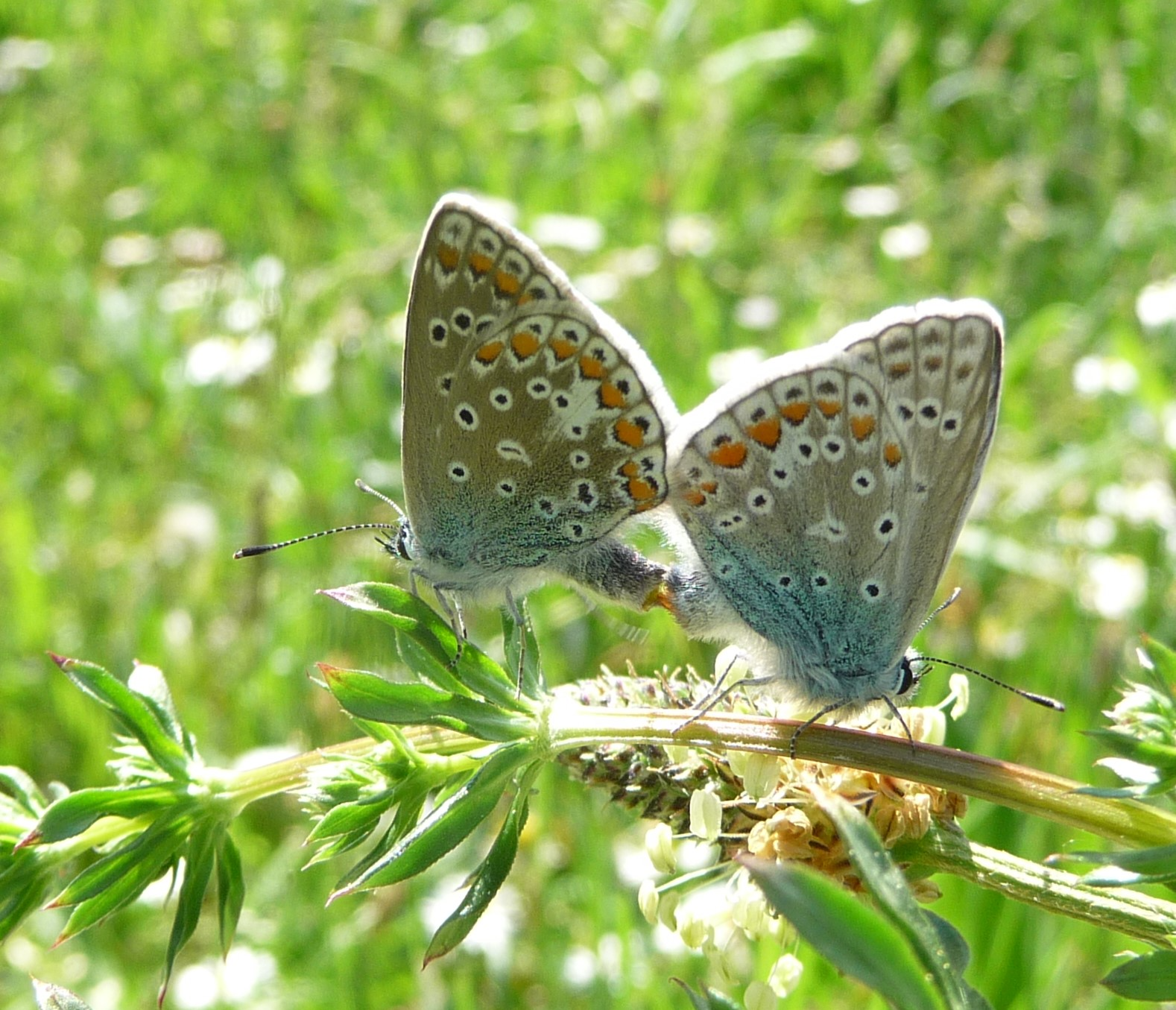 They were at it a long time. Here is one of them resting afterwards, showing its blue upper side (must be the male, I guess): 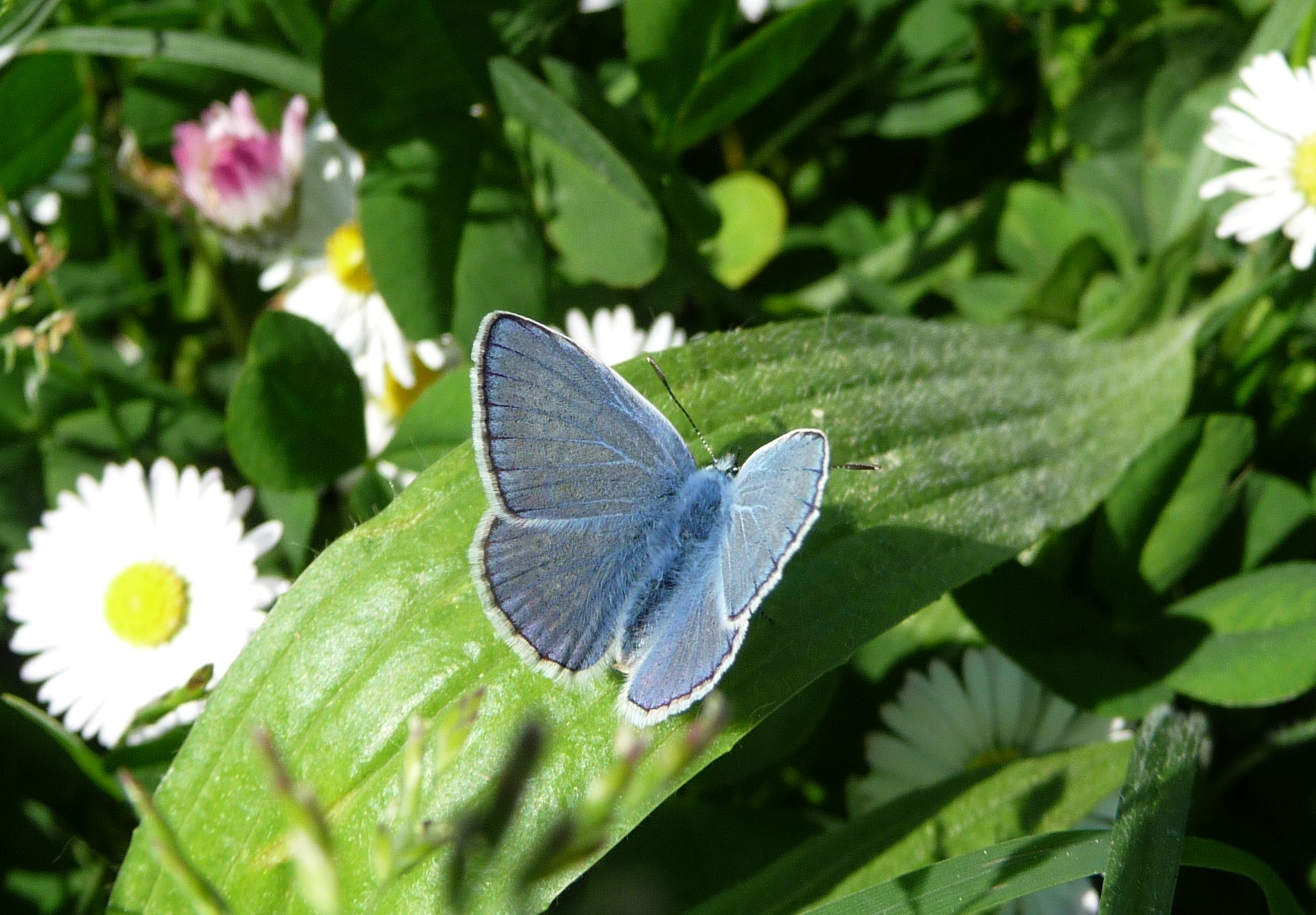 The next one was sitting on the sandy riverbank, licking minerals. It’s Apatura ilia, the lesser purple emperor, looking somewhat the worse for wear probably from a bird encounter (a small piece of wing is missing). The brightness and hue of the color change massively with the angle of the light source in this species. Its caterpillars love willow, which grows nearby. I am told this used to be common, but I rarely see it. 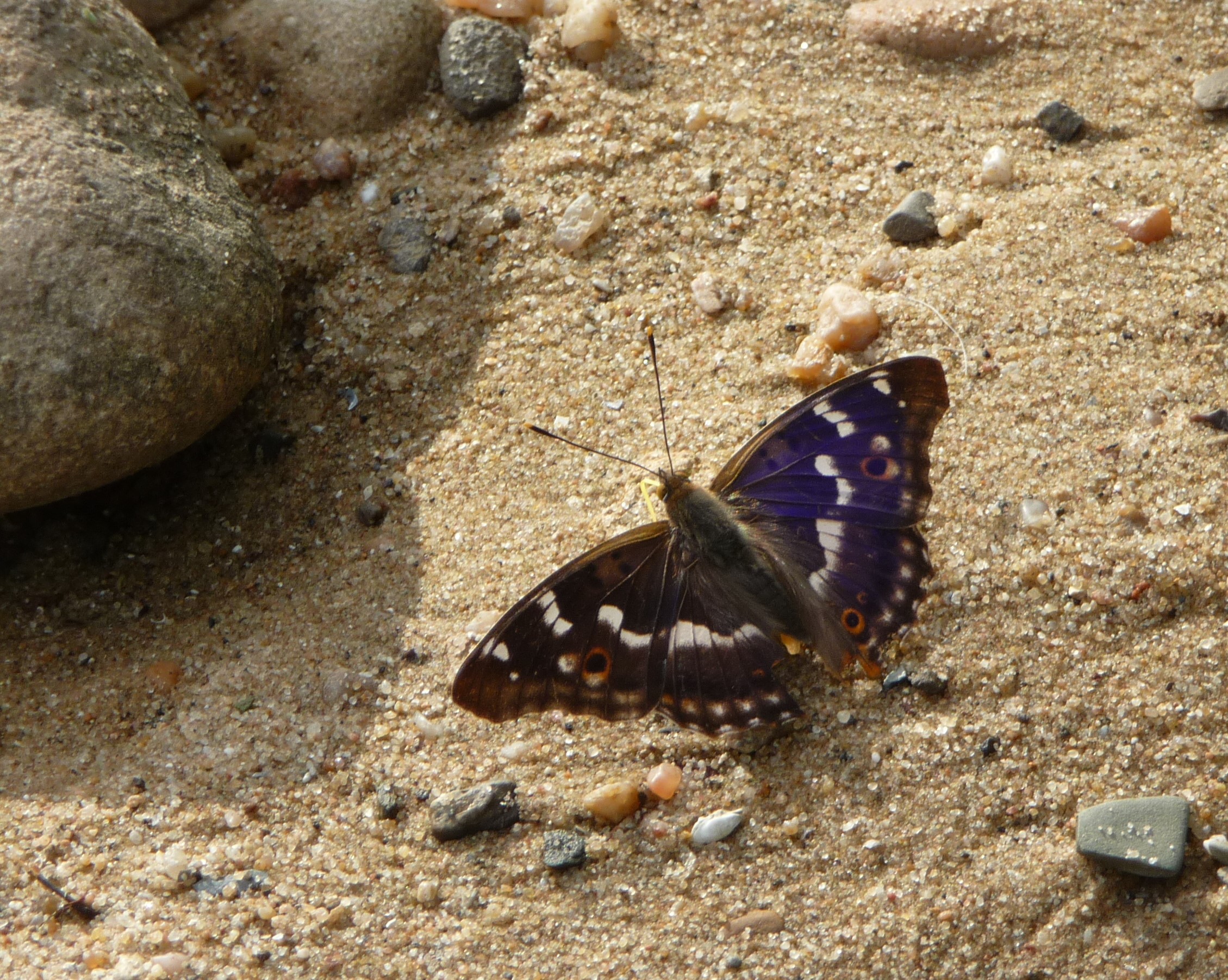 Now to the other side of the color spectrum: 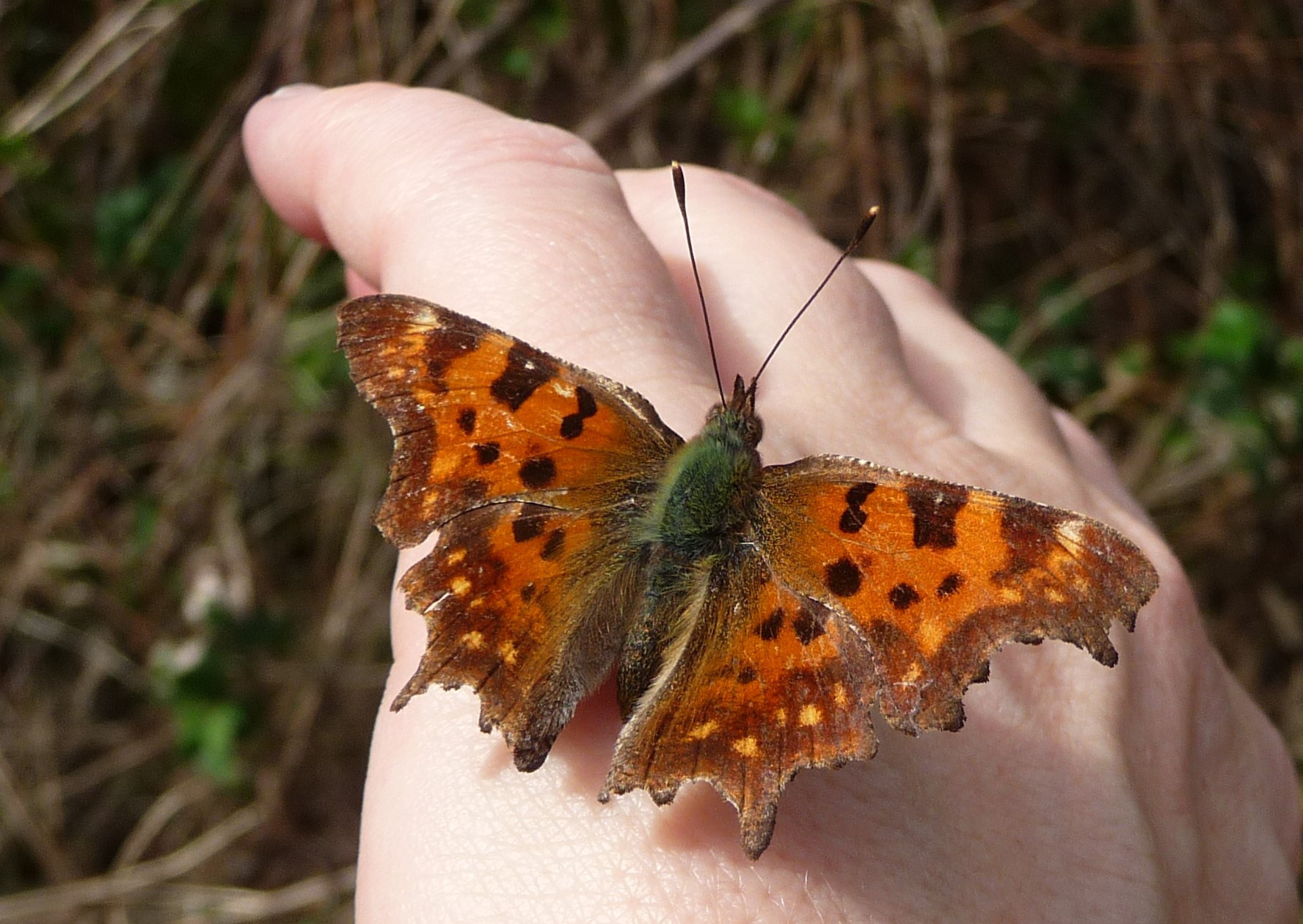 This is a species regularly found in and on the edges of woodland, Polygonia c-album or the comma, called simply c in German, because of the white comma or c on the underside of the wings. The arrow shows the name-giving c/comma. As you can also see here, the comma is camouflaged as a dry leaf when its wings are folded. 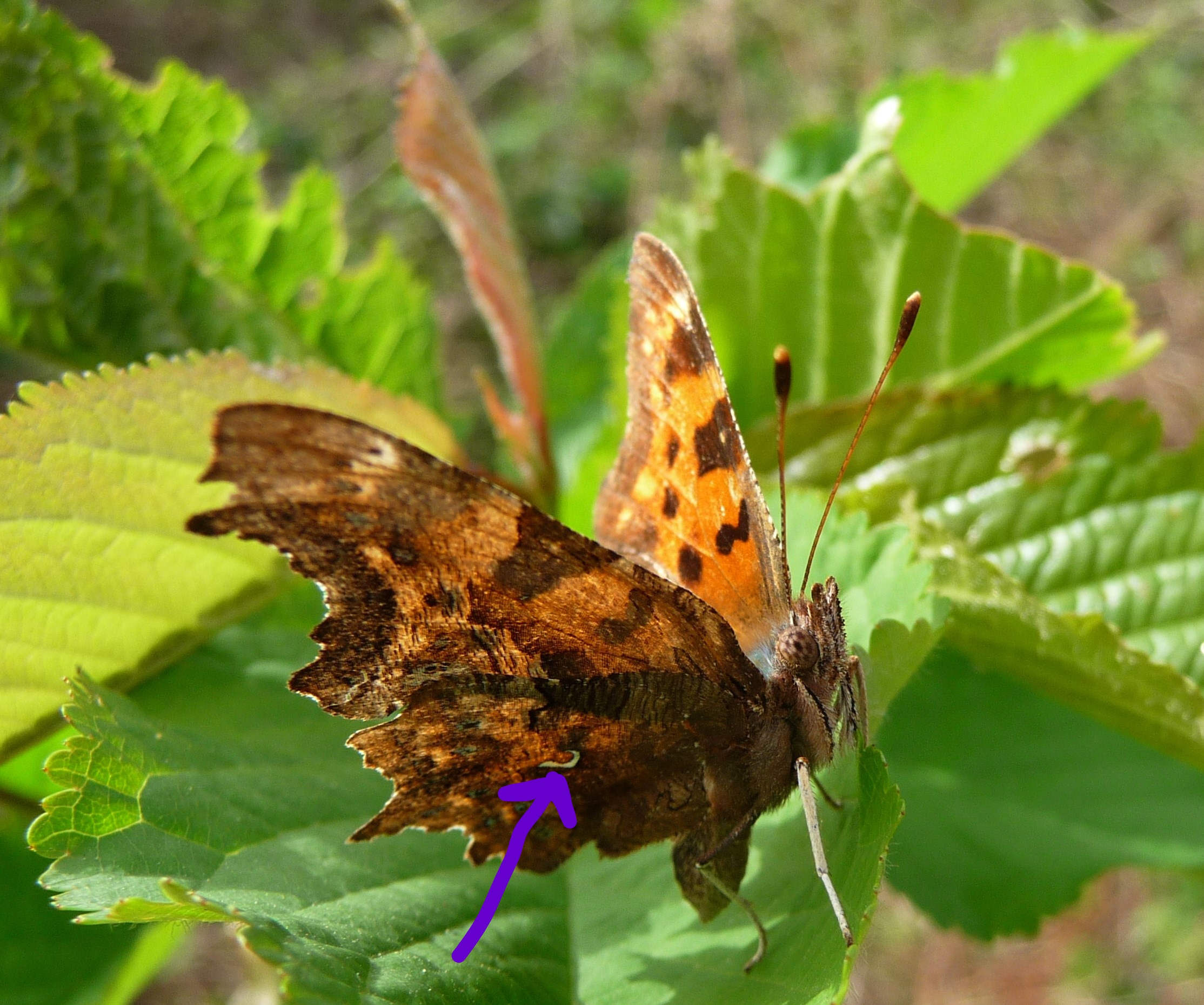 Fresh green leaf mimesis here, most closely resembling young leaves in Spring as well as the leaf undersides of the evergreen bushes this  species likes to hibernate in. It is, of course, Gonepteryx rhamni, the common brimstone. They hardly ever deign to sit with wings spread, so I don’t have a picture of the yellow (in males) upper side. 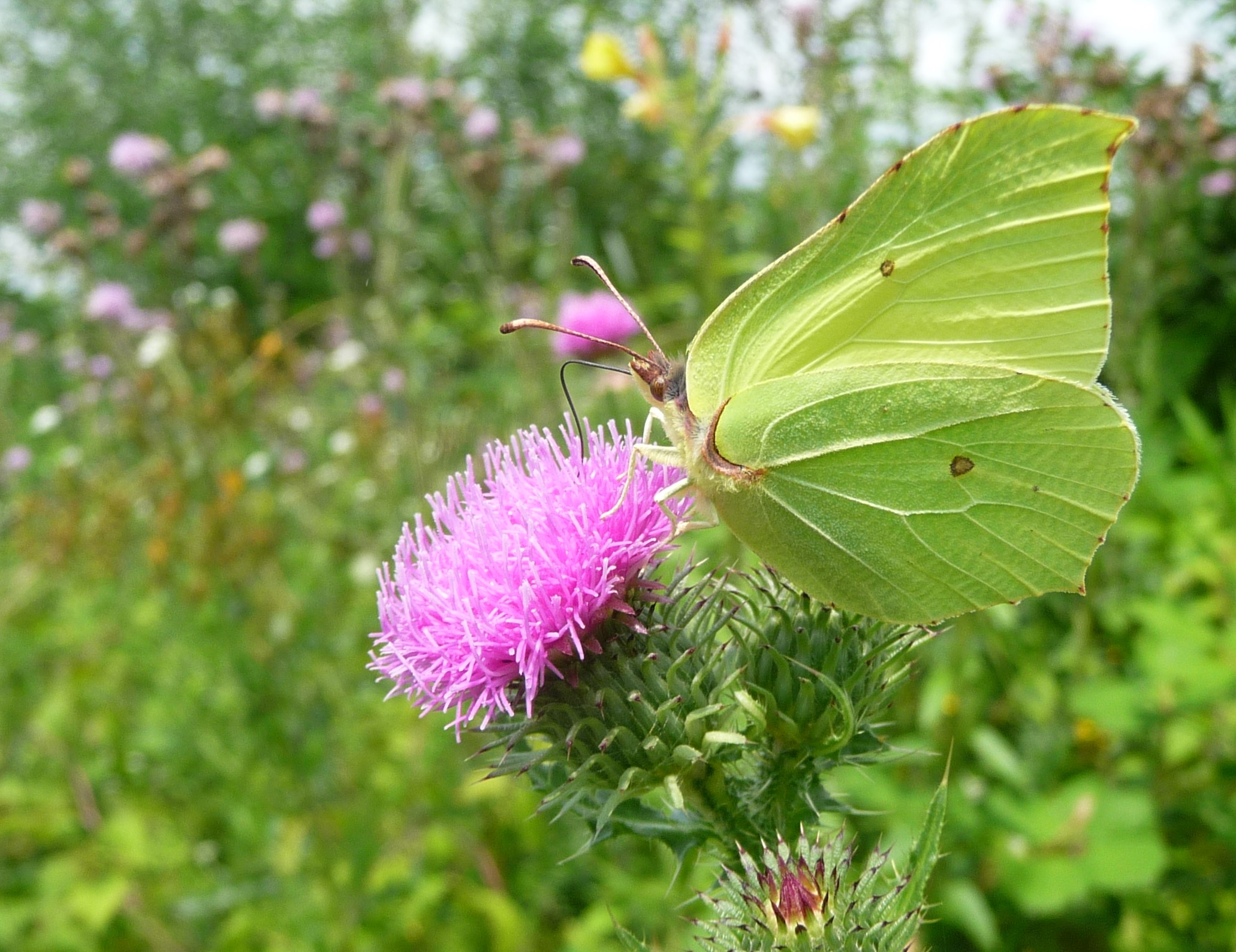 Another well-loved staple of temperate palearctic lepidofauna. — the small tortoiseshell, Aglais urticae (yes, there are nettles galore a few meters further on). This was taken on a mowed lawn that had been grassland full of diverse blossoms and wild bees two days earlier, mowed by the municipality out of pure spite against bees to keep things orderly. 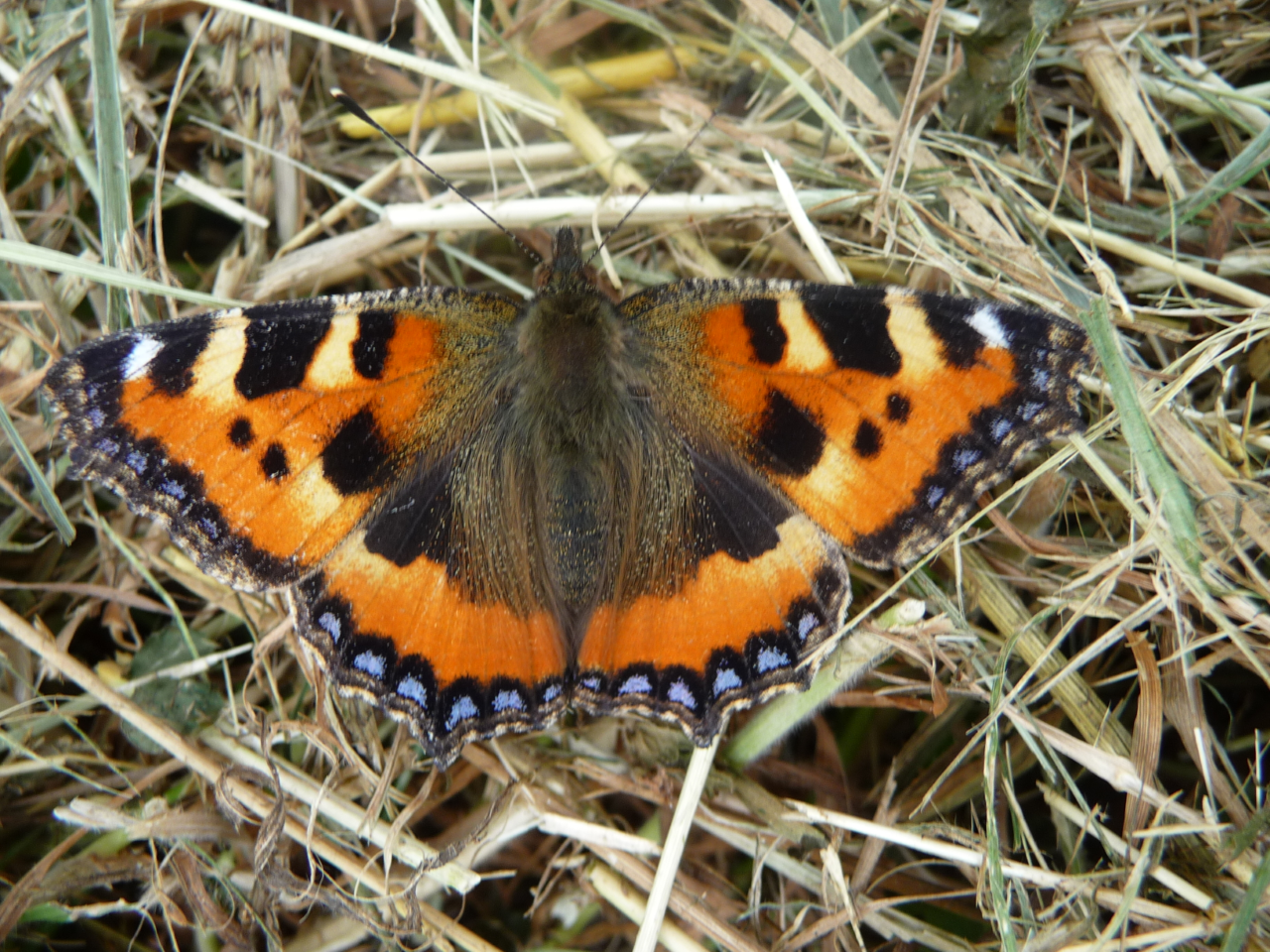 Finally, from the Pieris genus (“whites”), whose caterpillars like brassica vegetables and have followed the food and European Homo sapiens to North America, I’ll show you a species that I think is less frequent in North America and prefers wild crucifers to cabbage, Pieris napi.

The light pink flower is (I think) Armeria maritima ssp. elongata, the tall thrift, a bit of a rarity in Germany. Here, it grows on a large early Holocene deposit of river sand officially designated as a nature reserve, which keeps the municipality from mowing as soon as flowers other than daisies dare to raise their heads. 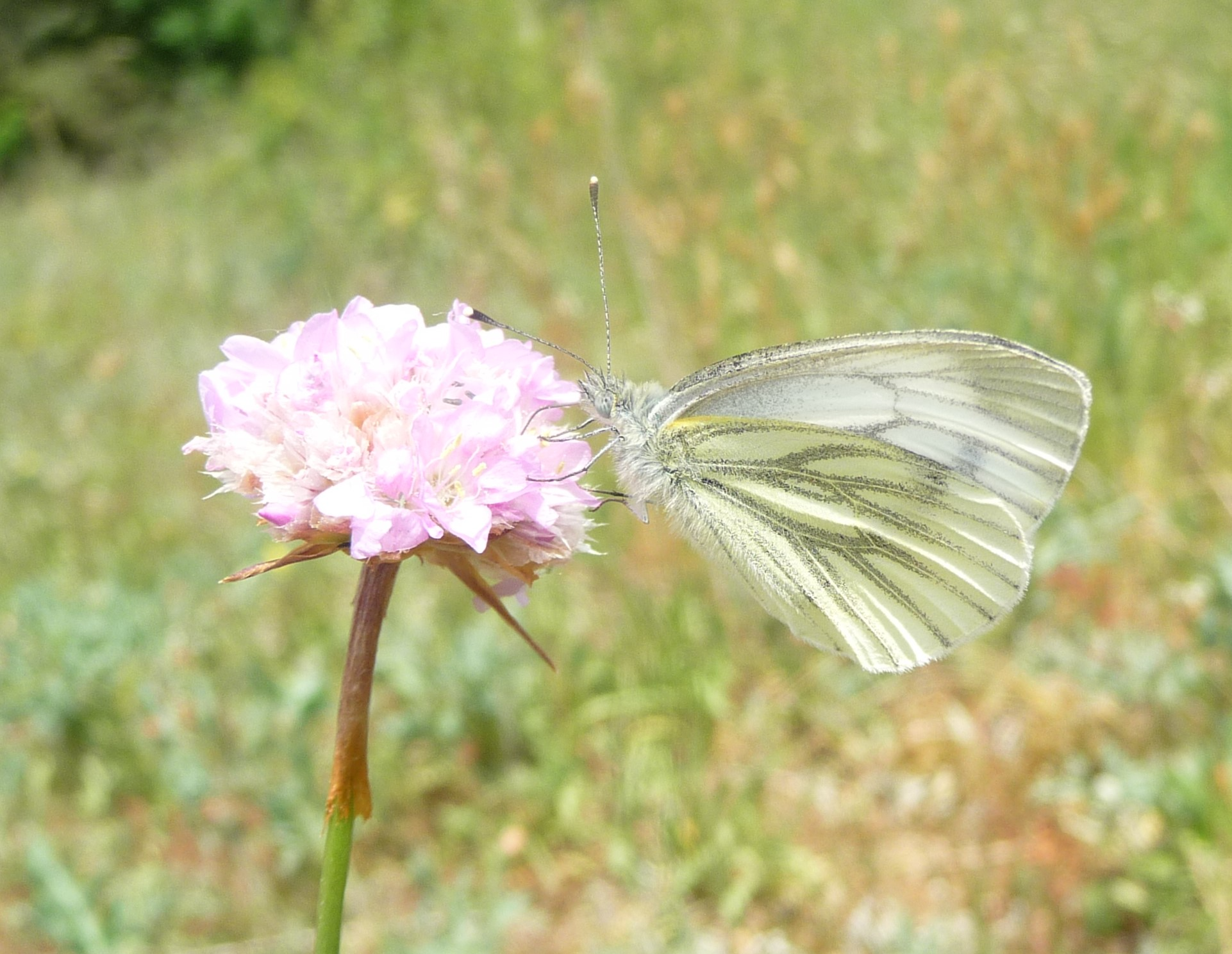 Maybe you have noticed the absence of possibly the most beautiful European (circumboreal, really!) butterfly, the Old world swallowtail, Papilio machaon. Although officially widespread in central Europe, I haven’t seen a single one since early childhood.
That’s all for today!