UPDATE: Somehow I missed that Jason has a new book that expands on this problem (I didn’t see it on the Amazon site). Here’s the cover, and click on it to go to the site: 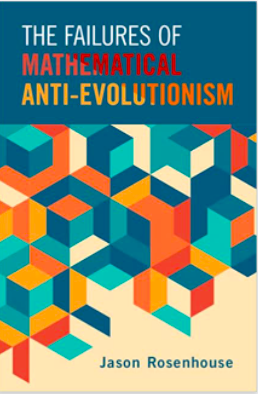 Jason Rosenhouse is a professor of math at James Madison University in Virginia and also a friend. Besides teaching and researching in his field, he’s also written a lot about applying math to popular culture, including books on Sudoku and the perplexing Monty Hall Problem. But to me his biggest contribution has been his series of books and writings about creationism. Jason has not only immersed himself in creationist culture, attending lots of meetings to suss out the psyche of anti-evolutionists, but also written about it in both books and articles (see his 2012 book Among the Creationists: Dispatches from the Anti-Evolutionist Front Line).

He’s just come out with an article in the Skeptical Inquirer (see below) in which he summarizes how Intelligent Design creationists use mathematical arguments to show that evolution is impossible, and then Rosenhouse debunks the tactics they use. Jason writes very well and very clearly, so this article is accessible to the layperson. It’ll give you a strarter background on the creationists’ arguments (yes, IDers are creationists), and why those arguments re misguided.

Jason explicates and then demolishes two ID arguments against evolution. Quotes from Jason are indented, my own prose is flush left.

1.) The probability of evolution producing complex features, like bacterial flagella, is almost nil.

The ID argument rests on the idea that if the probability of an amino acid in a protein, say tyrosine, being in a specific position is small, then the probability of getting a protein of 100 amino acids with tyrosine in the right position and the other 19 amino acids in the other right positions is effectively zero. (They simply multiply probabilities for each site together.) But, as Jason shows, that’s not the way that evolution works. Proteins are built up step by step, with each step adopted only if it incrementally improves fitness. The probability-multiplying argument is so transparently false that I’m surprised people believe it, but of course most people don’t have a decent understanding of probability.

However, this argument is premised on the notion that genes and proteins evolve through a process analogous to tossing a coin multiple times. This is untrue because there is nothing analogous to natural selection when you are tossing coins. Natural selection is a non-random process, and this fundamentally affects the probability of evolving a particular gene.

To see why, suppose we toss 100 coins in the hopes of obtaining 100 heads. One approach is to throw all 100 coins at once, repeatedly, until all 100 happen to land heads at the same time. Of course, this is exceedingly unlikely to occur. An alternative approach is to flip all 100 coins, leave the ones that landed heads as they are, and then toss again only those that landed tails. We continue in this manner until all 100 coins show heads, which, under this procedure, will happen before too long. The creationist argument assumes that evolution must proceed in a manner comparable to the first approach, when really it has far more in common with the second.

IDers, however, have made the argument a bit more sophisticated:

Let us return to coin-tossing. Suppose we toss a coin 100 times, thereby producing a chaotic jumble of heads and tails. It was very unlikely that just that sequence would appear, but we do not suspect trickery. After all, something had to happen. But now suppose we obtained 100 Hs or a perfect alternation of Hs and Ts. Now we probably would suspect trickery of some kind. Such sequences are not only improbable but also match a recognizable pattern. ID proponents argue that it is the combination of improbability and matching a pattern that makes them suspect that something other than chance or purely natural processes are at work. They use the phrase “complex, specified information” to capture this idea. In this context, “complex” just means “improbable,” and “specified” means “matches a pattern.”

As applied to biology, the argument goes like this: Consider a complex, biological adaptation such as the flagellum used by some bacteria to propel themselves through liquid. The flagellum is a machine constructed from numerous individual proteins working in concert. Finding this exact functional arrangement of proteins is extremely unlikely to happen by chance. Moreover, they continue, the structure of the flagellum is strongly analogous to the sort of outboard motor we might use to propel a boat. Therefore, the flagellum exhibits both complexity and specificity, and it therefore must be the product of intelligent design.

That is, natural selection, say critics like William Dembski, can’t create “complex specified design”. But we have no idea what organismal features would imply intelligent design (“specificity”) rather than selection. Further, as for “complexity”, Jason says this:

The argument likewise founders on the question of complexity. According to ID proponents, establishing complexity requires carrying out a probability calculation, but we have no means for carrying out such a computation in this context. The evolutionary process is affected by so many variables that there is no hope of quantifying them for the purposes of evaluating such a probability.

In summary, any anti-evolutionist argument based on probability theory can simply be dismissed out of hand. There is no way to carry out a meaningful calculation, and adding “specificity” to the mix does nothing to improve the argument.

2.) Because mutations are degrading processes, much more likely to make DNA coding for a protein less adapted to the environment than more adaptive, there is no way that new genetic information can be created. Ergo, complexity, much less adaptation, can’t increase. rgo God—the Creator of Complexity. In some ways this resembles the old Second Law of Thermodynamics argument against evolution: entropy must increase, and evolution appears to violate entropy by making matter less random.  Thus we need God to get the entropy down.

The problem with that is, of course, the Second Law holds only in a closed system, but evolution occurs in an open system: the Earth in its surrounding universe. Evolution is fueled by radiation from the Sun, which involves an increase in entropy, and any decrease in entropy produced by evolution is more than compensated for by the increased entropy produced by generating evolution’s fuel: solar energy.  Ergo, in the whole system, the Second Law is obeyed.

There’s already one way known whereby new genetic “information” can increase: gene duplication.  Sometimes due to errors in replication, a gene is duplicated, and we have two copies instead of one (there are always two copies in a diploid genome, but I’m talking about what happens when a gene on one chromosome duplicates in addition. When this happens, there is an opportunity for that new copy of the gene to diverge in function from the old one, for the old one’s still around doing its thing. The new copy can do a new thing. Ergo, new information.  This in fact has happened a gazillion times in evolution: all of our globins, for instance (alpha, beta, fetal hemoglobin, and myoglobin) were produced by gene duplication and subsequent divergence. In Antarctic fish, an enzyme used to digest food has, after duplication, evolved into a blood antifreeze protein to allow them to inhabit waters below the freezing point.

Jason mentions gene duplication (I’m just giving examples), and then goes into the “No Free Lunch” ideas of Dembski and others, showing that these ideas irrelevant to the possibility of evolution.  I’ll let you read that part for yourself (read the whole thing!), and will just give two more quotes from Jason:

Even if we accept everything Dembski and his coauthors are saying about these theorems, this whole line of attack simply amounts to nothing. Most of us did not need difficult mathematical theorems to understand that Darwinian evolution can work only if nature has certain properties. The search problem confronted by evolution arises ultimately from the laws of physics, but it is well outside biology’s domain to wonder why those laws are as they are. Dembski and his cohorts argue that the fundamental constants of the universe encode information of a sort that can arise only from an intelligent source, but they have no more basis for this claim than they did for the comparable claim about genetic sequences.

Everyone agrees that complex adaptations require a special sort of explanation. Scientists argue that actual biological systems show copious evidence of having resulted through evolution by natural selection. Anti-evolutionists reject this claim, but the ensuing debate, such as it is, has nothing to do with mathematics. This makes you wonder why anti-evolutionists insist on padding their work with so much irrelevant and erroneous mathematical formalism. The answer is that their literature has far more to do with propaganda than it does with serious argument. Mathematics is unique in its ability to bamboozle a lay audience, making it well suited to their purposes. But for all its superficial sophistication, anti-evolutionary mathematics is not even successful at raising interesting questions about evolution.

Jason knows whereof he speaks, as he knows both math and evolution.

56 thoughts on “The intellectual vacuity of mathematical arguments against evolution”