Today’s bit of enlightenment comes from Athayde Tonhasca Júnior, and is on a subject that makes some people squeamish. But read on!

‘Thick-headed undertakers in the night of the living dead’

If you watched Alien, you may have jumped out of your seat when the baby monster burst from the astronaut’s chest. But an entomologist may have nodded knowingly: ‘Ah, a human parasitoid!’ Indeed, the screenwriters acknowledged entomological inspirations for coming up with the alien’s life cycle.

Here on Earth, a parasitoid is an insect whose larva develops inside the body of a host (usually another insect), eventually killing it. This type of life history lies between a predator’s and a parasite’s: a predator such as a dragonfly takes several prey and kills them outright, while parasites such as lice, fleas and ticks live off hosts without killing them.

Wasps account for most parasitoid species, but quite a few of them are flies. These include the 800 or so species of thick-headed flies (family Conopidae). A look at one of them explains their common name, although some species look more like wasps or bees than flies. They are also known as bee-grabbers or conopids. 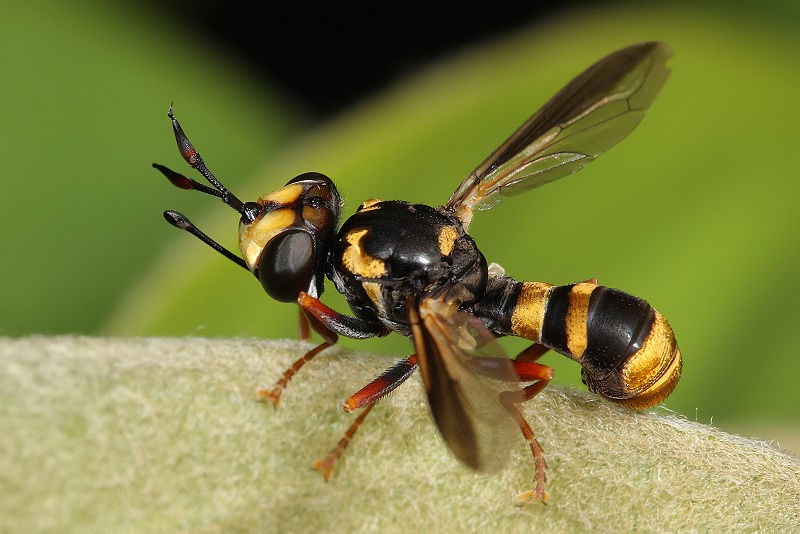 Thick-headed flies hang around flowers looking for a sip of nectar. But a female may have other ideas: she may be waiting for an opportunity to lay her eggs, which is bad news for a bee or wasp.

It goes like this: an unsuspecting bumble bee worker approaches a flower. A female conopid closes in and grabs the bee in mid-air. Still afloat, she pries open the bumble bee’s abdominal segments with her theca, which is a pad-like, hardened structure at the end of her abdomen. Sometimes attacker and victim fall to the ground, but the outcome is the same; the female fly lays a single egg inside the bumble bee and lets it go. 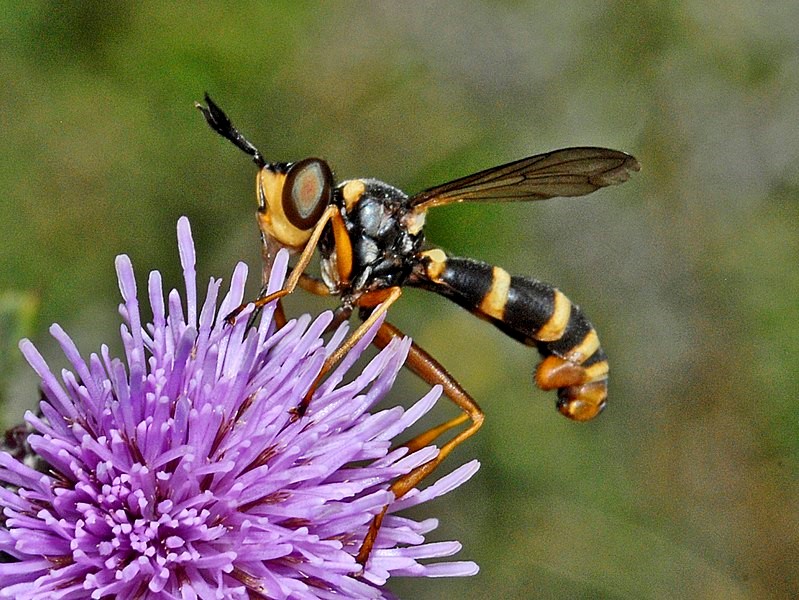 The drama is over within seconds, and both insects fly away. The fly will stalk another quarry. But the bumble bee is done for.

The egg hatches and the conopid larva develops inside the bumble bee, consuming her innards. But the larva does not penetrate the host’s thorax, thus leaving her flight muscles intact. The bee carries on with her life, feeding and taking nectar back to her nest, although less and less efficiently as the parasitoid grows. Within 10 to 12 days her abdomen is completely taken up by the larva, which has nothing more to eat. The bee dies and falls to the ground (if you find a dead bumble bee with a swollen abdomen, conopid parasitism could be the causa mortis). The larva pupates and overwinters inside the bee’s body, and the adult emerges in the following year. 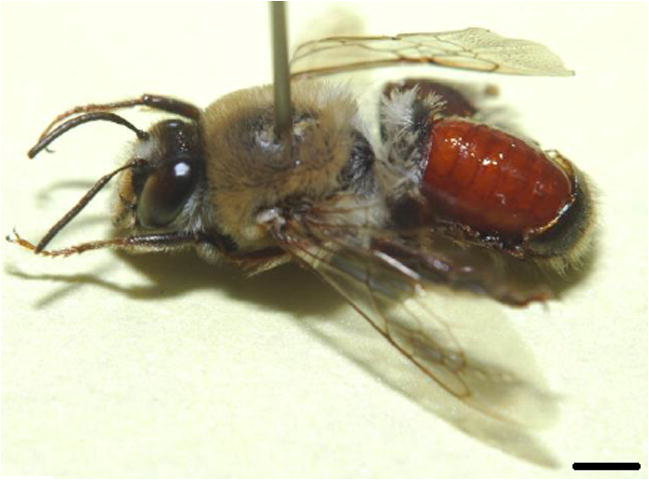 Some conopids increase the chances of their pupae making it through the winter with a trick that may seem macabre to human eyes: they induce their bumblebee hosts to dig their own graves. In North America, bumblebees parasitized by the conopid Physocephala tibialis bury themselves in the ground just before popping the clogs. This grave-digging behaviour does not make a difference for the bee, but the parasitoid pupa is sheltered from cold and dehydration during winter months, and less exposed to pathogens and its own parasites. Hibernation in the soil also promotes larger and healthier adult flies. 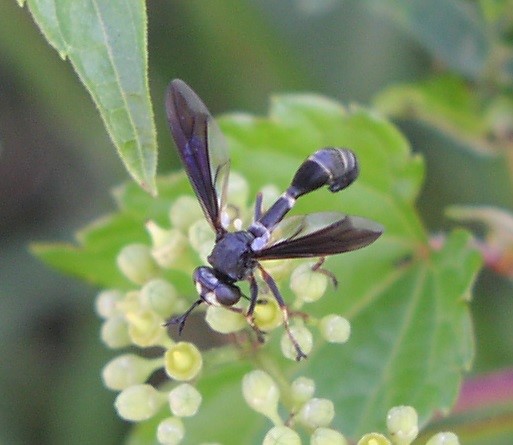 But bees don’t take it lying down. When parasitism pressure becomes too high, some species reproduce later in the year to avoid peaks of conopid populations. And some bumblebees – like many other insects – secrete melanin, which encapsulates and suffocates internal parasites. It is estimated that melanisation kills up to 30% of conopid larvae.

After a parasitized bumblebee has dug its burial pit somewhere in America, a cold, drizzly night falls over the land. All is quiet. Until in an apiary nearby, one of the resident honey bees (Apis mellifera) does something odd: she emerges from the hive and flies towards a streetlight glowing faintly in the distance. A few of her sisters follow suit, although some of them fall to the ground and begin walking around in circles, apparently confused. None of these night wanderers will ever return to the hive; soon they will all be dead. They have been victims of a parasitoid ominously named the zombie fly (Apocephalus borealis). 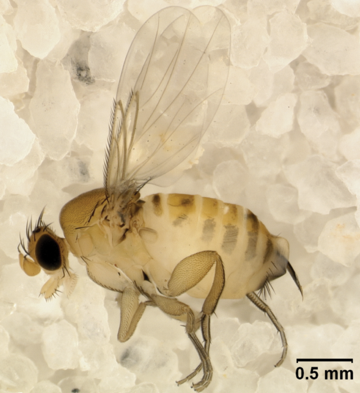 This fly belongs to one of the largest insect groups, the family Phoridae. They comprise about 4,000 described species, but specialists believe this number represents a fraction of the total. Phorids look like fruit flies with arched backs, and when spooked they run away before taking flight. Such behaviours explain their common names: hump-backed flies or scuttle flies. They are everywhere, and have a variety of feeding habits such as saprophagy (they eat decaying organic matter), predation, and herbivory. One species is a serious pest of cultivated mushrooms.

Two groups of Phorid flies, the genera Pseudacteon and Apocephalus, are found mostly in South America and are charmingly known as ant-decapitating flies. A typical species approaches an ant from behind and uses its powerful, hooked ovipositor to inject an egg in the victim’s head or thorax. 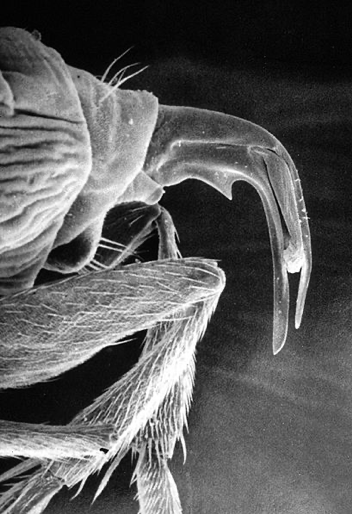 The resulting larva moves to the ant’s head, where it feeds on hemolymph (‘blood’) and tissues. Eventually, the larva consumes all the head’s contents, causing the ant to wander around erratically. In two to four weeks, the larva is ready to pupate. It releases enzymes that dissolve the tissues attaching the ant’s head to its body. The head falls off, and the fly pupates inside it before emerging as an adult. These flies are efficient ant killers, and therefore are promising biological control agents against invasive species such as fire ants (Solenopsis spp.).

Fig. 8. A) An ant-decapitating fly (Pseudacteon sp.) preparing to inject an egg into the thorax of a fire ant. B) A decapitated ant with a fly maggot consuming the contents of its head © Porter & Gilbert, 2005. International Symposium on Biological Control of Arthropods.

The zombie fly does not decapitate honey bees, but much of its life history is similar to those of its tropical relatives. It lays its eggs in the abdomen of the bee. The larvae feed on hemolymph and flight muscles, and when they are done, they leave the host to pupate outside. Up to 13 larvae have been observed coming out of a dead honey bee. 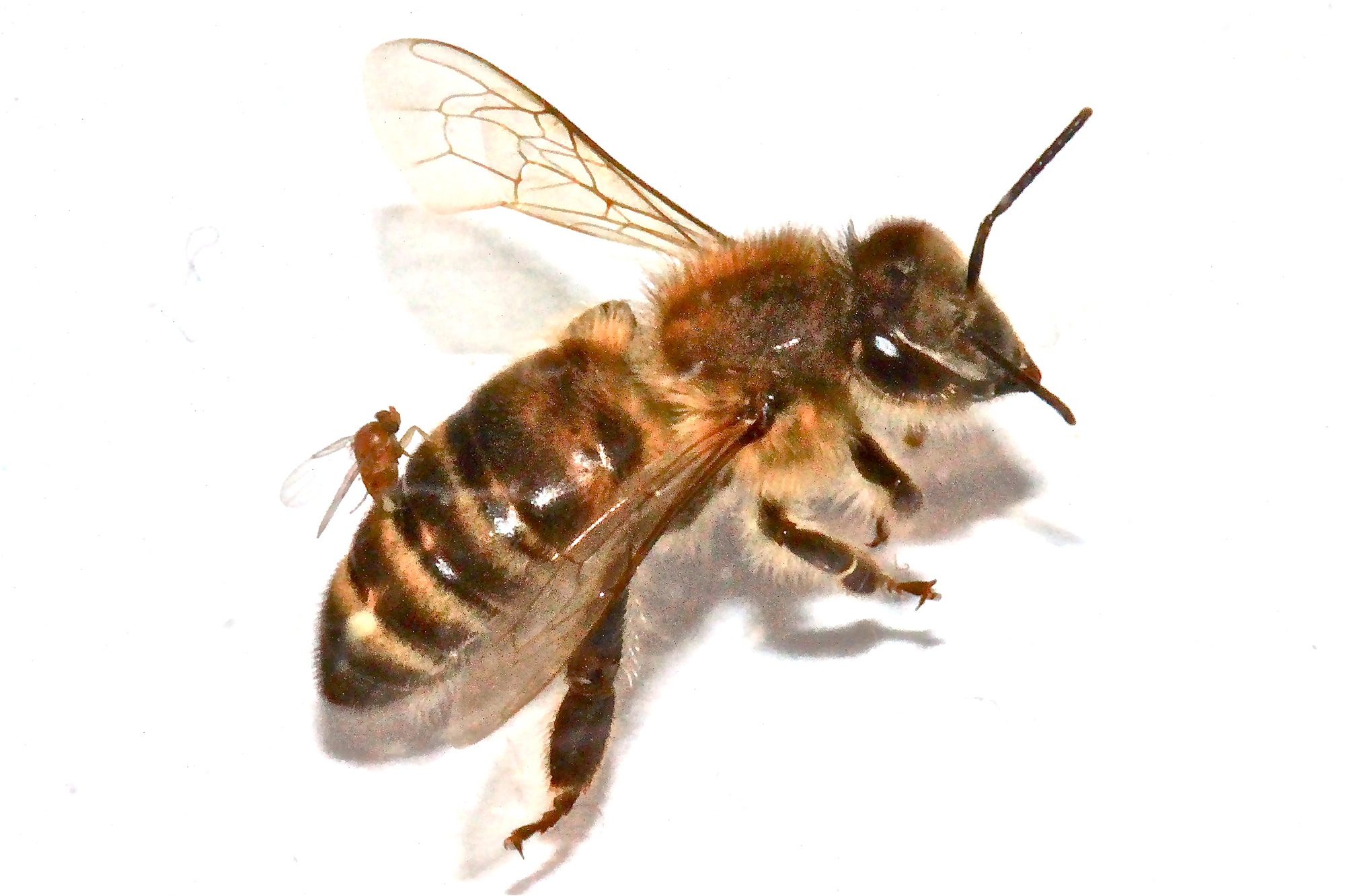 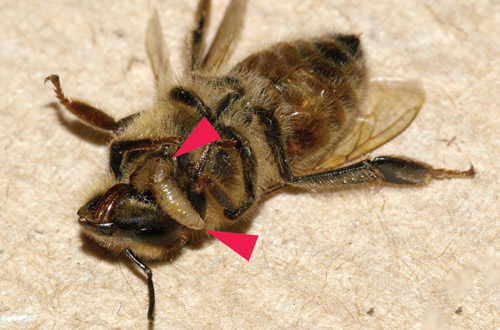 We don’t know why a parasitized honey bee abandons her nest, especially at night, to wander on a suicidal excursion. Her neurological wiring may have been highjacked by the fly, inducing the bee to seek a safer place for the development of the parasitoid’s eggs and larvae. The bee may have been forced out by her healthy sisters; or she left the colony on her own, acting on an altruistic instinct to avoid an epidemic. 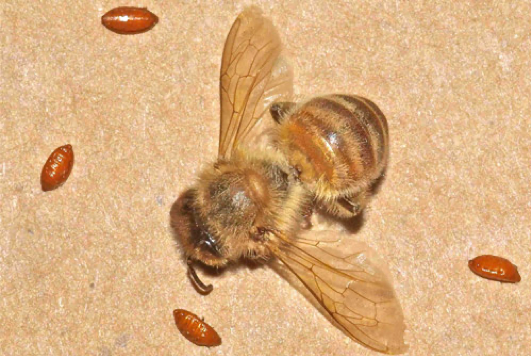 The zombie fly is native to North America, where it has long been known to parasitize bumble bees and wasps. Then in 2009, there was an alarming discovery: the fly was also attacking honey bees in parts of the country. And there was more bad news to come. The zombie fly harbours the fungus Nosema ceranae and the Deformed Wing Virus, which are serious threats to honey bees. Researchers don’t know yet whether the zombie fly plays a role in the transmission of those pathogens to bees, but the possibility is worrying.

Conopids and zombie flies are some of the many parasites and parasitoids capable of changing hosts’ behaviour for their own benefit. Some wasps turn ladybirds into paralysed living shields over their eggs, and some fungi make ants climb up plants so they can release spores into the air. Perhaps the most notorious case is the effect of toxoplasmosis cells on rats and mice. Infected rodents become attracted to cat’s urine and are less likely to hide. This altered behaviour is a death wish: they became easy prey for cats, in which toxoplasmosis cells complete their development. Carl Zimmer discussed many other examples in his excellent Parasite Rex; you can read about some of them here.

Parasitism seems gruesome and cruel. Even Darwin was dismayed by it, as he expressed in one of his letters: ‘I cannot persuade myself that a beneficent & omnipotent God would have designedly created the Ichneumonidæ [ a group of parasitic wasps] with the express intention of their feeding within the living bodies of caterpillars.’* But such anthropomorphism is misguided and biased. Parasitoids, predators and parasites are regulators of the natural world: about 10% of all known insect species are parasitoids, although specialists believe this figure is a huge underestimation. They prevent excessive population growth, including of agricultural pests and disease vectors. Parasitism helps shape biodiversity and ecosystems, so it is not intrinsically bad or good. It is a characteristic of life on our planet.

* This famous quotation inspired a team of ichneumonid specialists to propose in 2019 ‘Darwin wasps’ as a vernacular name for this group of insects, so that they may become better known and appreciated. 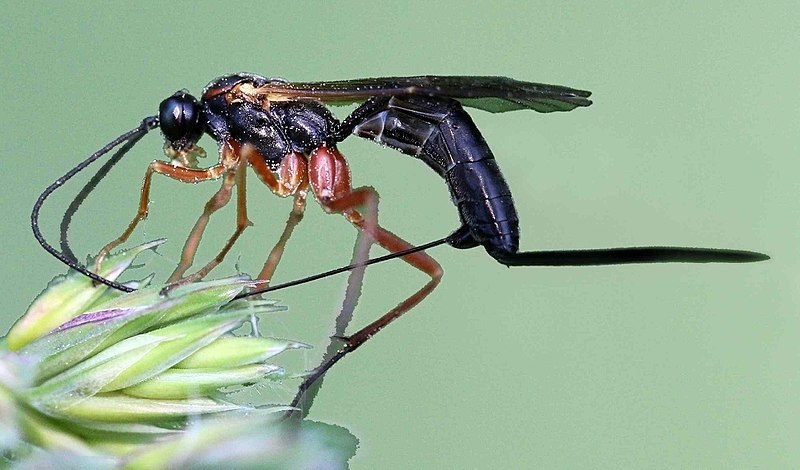