This article was in the April 22 issue of the New York Times, but has languished among my 1,737 draft posts. And compared to the toll of human lives following the Russian invasion, this can only be a footnote. But it’s an intriguing footnote, for it describes how a Russian hit on Antonov airport near Kyiv, in Ukraine, destroyed the world’s largest aircraft. That would be a plane manufactured in the Ukraine when it was part of Russia and flown (as a cargo plane) by Ukrainian pilots.

That plane would be the  Antonov An-225 Mriya. How big was it? Let Wikipedia give the stats:

With a maximum takeoff weight of 640 tonnes (705 short tons), the An-225 held several records, including heaviest aircraft ever built and largest wingspan of any aircraft in operational service. The Mriya attracted a high degree of public interest, attaining a global following due to its size and its uniqueness. People frequently visited airports to see its scheduled arrivals and departures.

Both the earlier and later takeoff weights establish the An-225 as the world’s heaviest aircraft, being heavier than the double-deck Airbus A380. It is surpassed in other size-related categories, but Airbus claims to have improved upon the An-225’s maximum landing weight by landing an A380 at 591.7 tonnes (1,304,000 lb) during tests, and the Hughes H-4 Hercules, known as the Spruce Goose, has a greater wingspan and a greater overall height, but the Spruce Goose is 20% shorter and overall lighter, due to the materials used in its construction. In addition, the H-4 only flew once and for less than a minute, making the An-225 the largest aircraft in the world to fly multiple times.

And from the NYT:

At 276 feet long and six stories high, the plane, designated AN-225, was bigger than any other in the sky. It boasted 32 landing wheels and a wingspan of 290 feet. Its maximum takeoff weight stood at a staggering 1.4 million pounds, far more than a fully loaded 747. Its nose cone flipped up so that big objects, like turbine blades or even smaller jets, could be slid into its cavernous belly.

Here’s why people would watch it take off:

And look at its main landing gear! 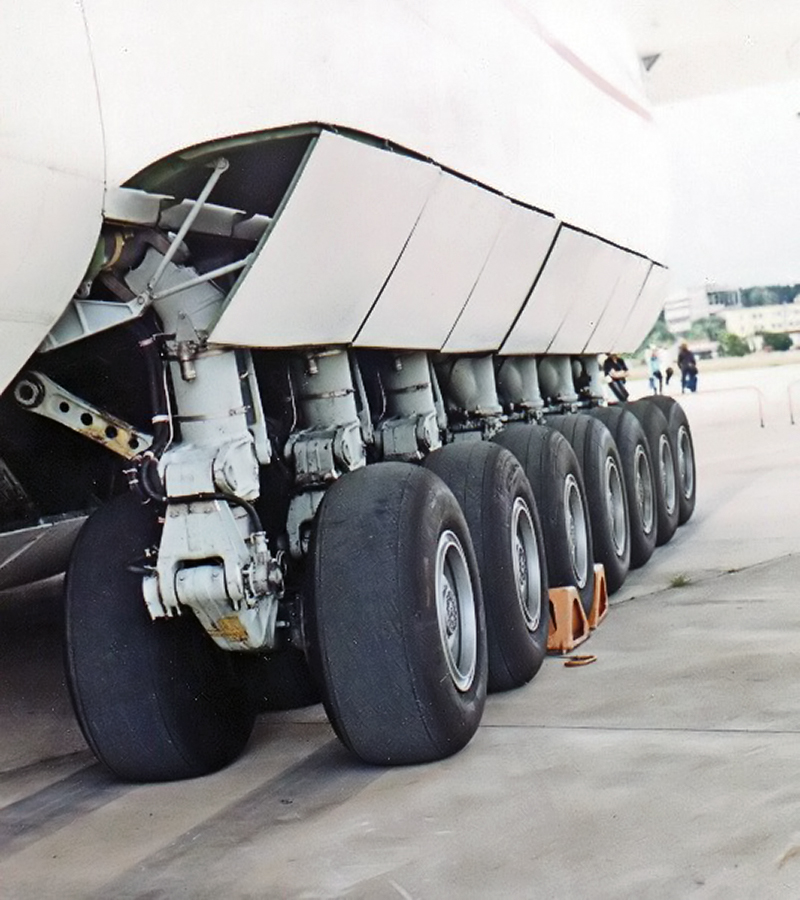 A Russian missile scored a direct hit on Mriya’s hanger, turning it to fragments. Here’s a video about that:

The NYT describes the sorrow attending the destruction of this one-of-a-kind plane, especially from its pilot:

In the case of Mriya, which took a direct hit during the pivotal battle at that airport, the damage to the aircraft has stirred an incredible outpouring of what can only be described as grief. Heartbroken airplane buffs around the world are getting Mriya tattoos. A sad cartoon has been circulating, with tears streaming out of Mriya’s eyes.

But there may be no one as broken up as Mr. [Oleksandr] Halunenko, who comes from a generation where emotions are not so easily shared.

The plane after it was hit.  The NYT says that “All might not be lost, though. The Ukrainian government, knowing the power of Mriya’s symbolism, has vowed to rebuild her with war reparations it hopes to squeeze from Russia.”  I wouldn’t hold my breath.

From the NYT: Haluneko finally worked up the courage to visit the plane to see the damage to the plane he flew many times: 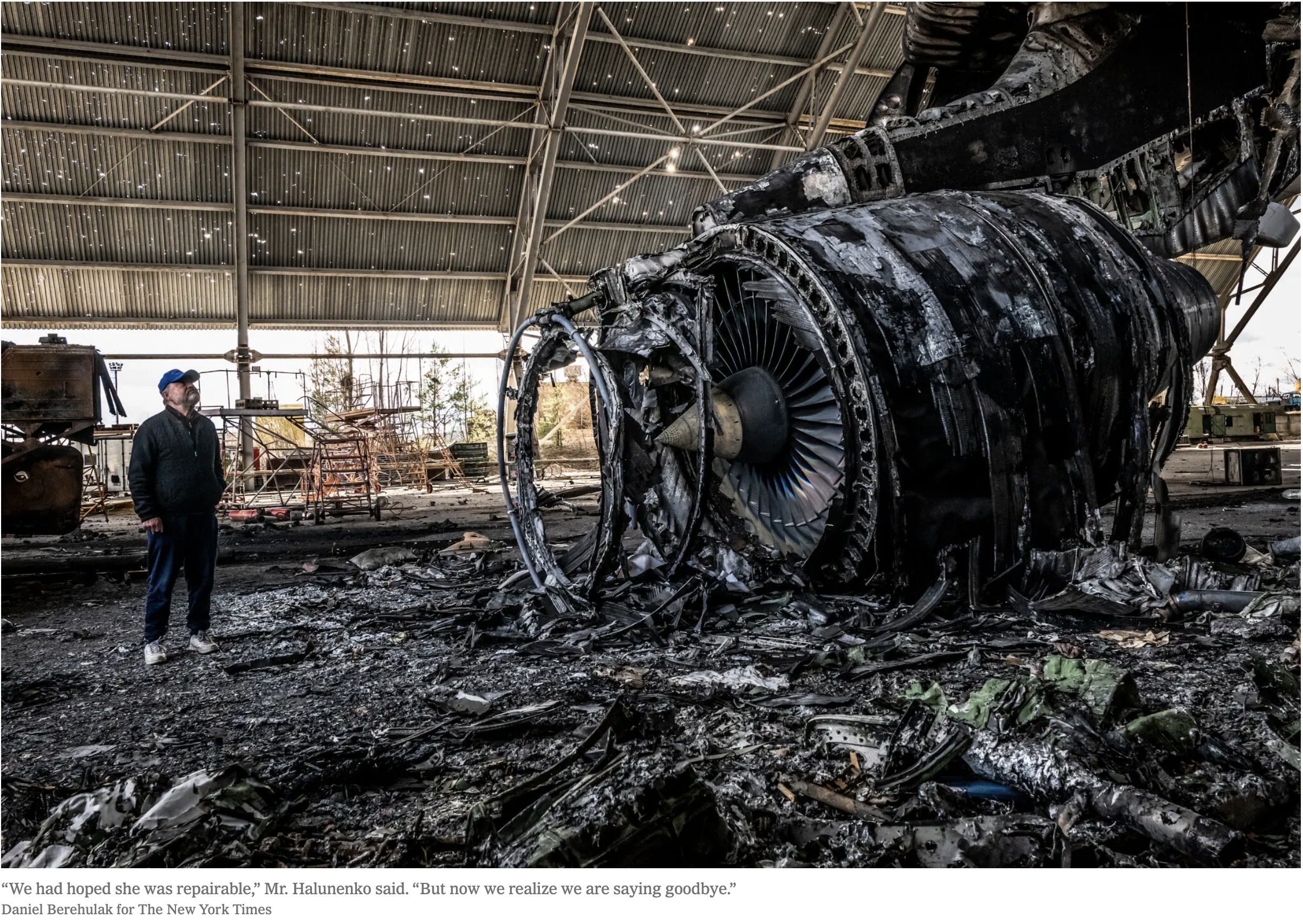 And another photo from the NYT: of Halunenko with his beloved plane: 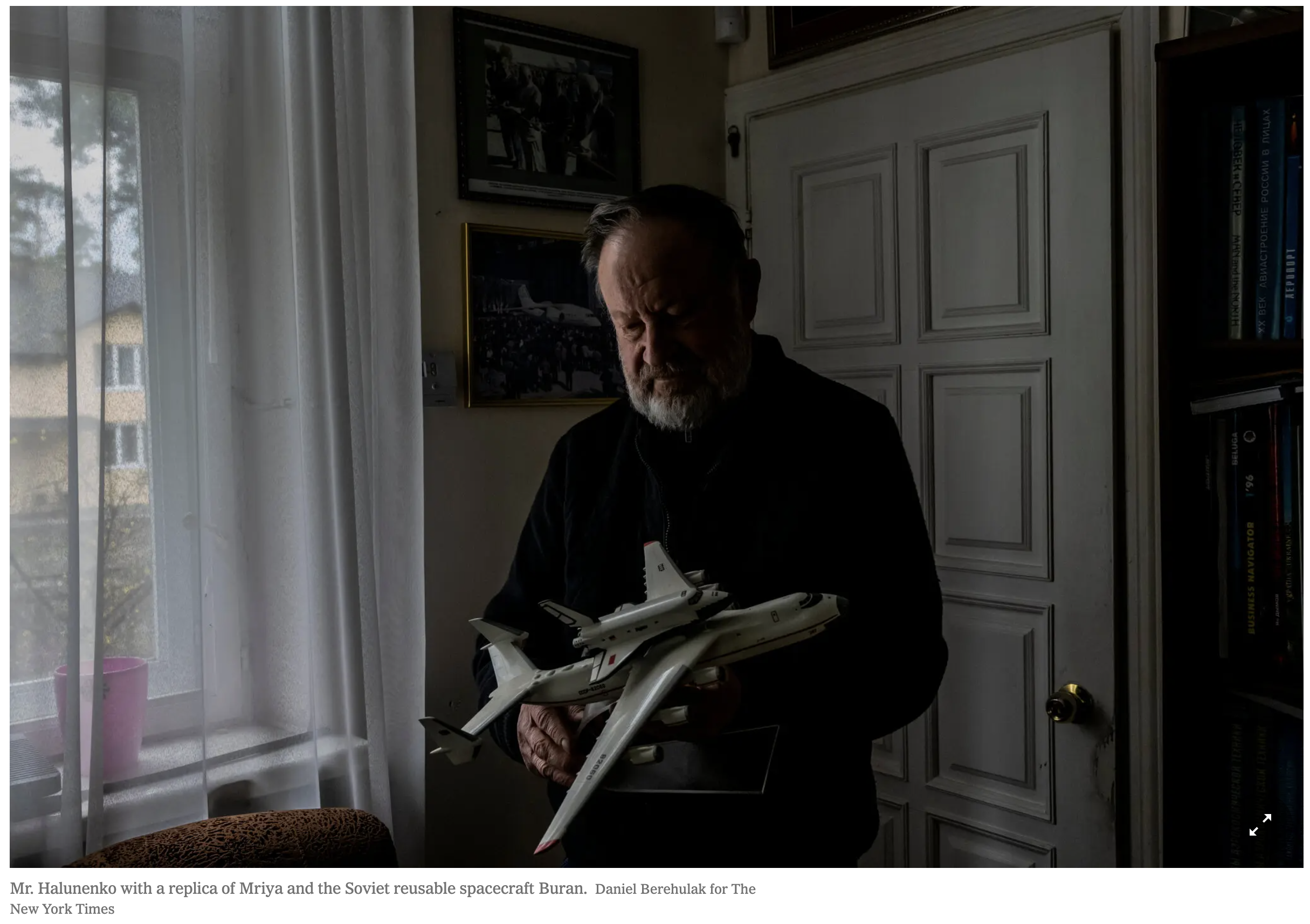 And another epic takeoff for you plane buffs: