Well I’ll be blowed, as a sailor might say: the New York Times has published a full-on article calling for atheism—the rejection of God. The author, brought up as an orthodox Jew, says we should simply give up the idea of God because the Biblical God, at least as portrayed in the Passover/Exodus story, was “hateful”.

It’s an old and classic argument, but not one you expect to see in the New York Times. Click on the screenshots to read: 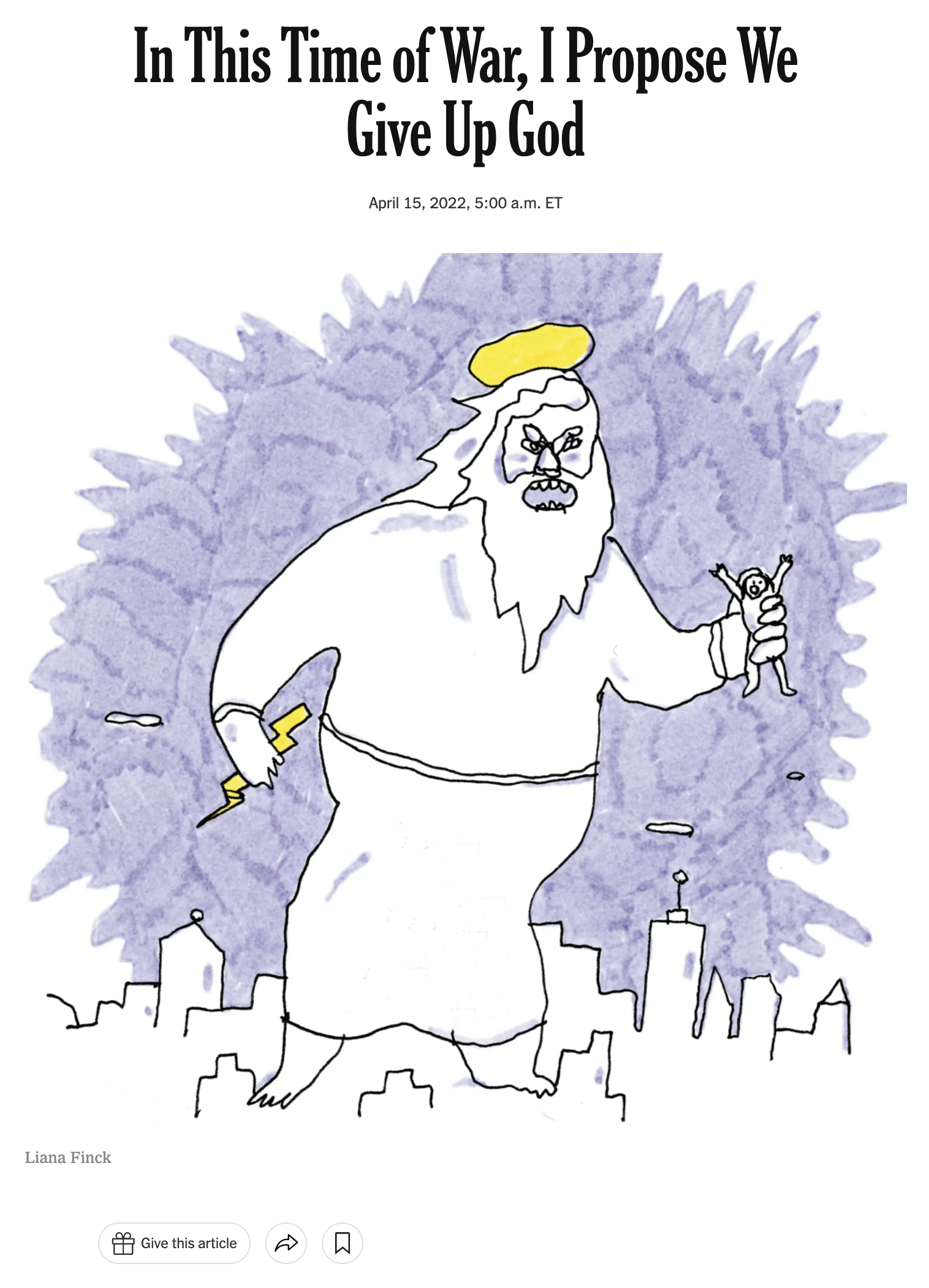 You surely know the Jews-in-Egypt story and the Passover tale. Here’s the Wikipedia summary:

In the Book of Exodus, the Israelites are enslaved in ancient Egypt. Yahweh, the god of the Israelites, appears to Moses in a burning bush and commands Moses to confront Pharaoh. To show his power, Yahweh inflicts a series of 10 plagues on the Egyptians, culminating in the 10th plague, the death of the first-born.

Before this final plague Yahweh commands Moses to tell the Israelites to mark a lamb‘s blood above their doors in order that Yahweh will pass over them (i.e., that they will not be touched by the death of the firstborn).

Those were some formidable plagues on the Egyptians, including frogs, boils, hail, locusts, pestilence, and so on. And each time Pharaoh was on the verge of giving in and releasing the Jews, God would “harden Pharoah’s heart”, so he wouldn’t let those Israelites go.  Finally, after the “passover” incident, in which God killed every first-born Egyptian (Jews were “passed over” by marking their doors with lamb’s blood), Pharoah’s heart softened, and he let the Jews go. It is this incident that’s celebrated by Passover.  This year Passover begins this evening and lasts until the evening of April 23.

(We’ll ignore the four decades of wandering in the Sinai, which is inexplicable.)

The thing is—and I believe I mention this in Faith Versus Fact—all those deaths and plagues and boils were God’s fault! It was God Hmself who hardened Pharoah’s heart. He didn’t have to do that–he could have made Pharoah let the Jews go after the first plague. But he didn’t! God kept hardening his heart, over and over again.

And this is what bothers Auslander (as well as another perfidy):

Two aspects of the Passover story have troubled me since I was first taught them long ago in an Orthodox yeshiva in Monsey, N.Y. I was 8 years old, and as the holiday approached, our rabbi commanded us to open our chumashim, or Old Testaments, to the Book of Exodus. To get us in the holiday spirit, he told us gruesome tales of torture and persecution.

“The Egyptians,” he told us, “used the corpses of Jewish slaves in their buildings.”

“You mean they used slaves to build their buildings,” I asked, “and the slaves died from work?”

“No,” said the rabbi. “They put the Jewish bodies into the walls and used them as bricks.”

This is the part that should make a rational person give up God:

. . .God, it seems, paints with a wide brush. He paints with a roller. In Egypt, said our rabbi, he even killed first-born cattle. He killed cows. If he were mortal, the God of Jews, Christians and Muslims would be dragged to The Hague. And yet we praise him. We emulate him. We implore our children to be like him.

Perhaps now, as missiles rain down and the dead are discovered in mass graves, is a good time to stop emulating this hateful God. Perhaps we can stop extolling his brutality. Perhaps now is a good time to teach our children to pass over God — to be as unlike him as possible.

“And so God killed them all,” the rabbis and priests and imams can preach to their classrooms. “That was wrong, children.”

“God threw Adam out of Eden for eating an apple,” they can caution their students. “That’s called being heavy-handed, children.”

Cursing all women for eternity because of Eve’s choices?

“That’s called collective punishment, children,” they can warn the young. “Don’t do that.”

“Boo!” the children will jeer.

This is a simple argument. If God is benevolent and omnipotent, He could have prevented this misery and death.  That means that if he exists, he’s either cruel or relatively powerless, and that’s not the conception of God held by any in the Abrahamic faith.

The existence of moral evil, like one human killing another, has been excused by various theologians as an unavoidable consequence of the free will vouchsafed to us by God, or by other sneaky and ludicrous devices of theodicy. But none of them explain physical evil—deaths by tsunamis, earthquakes, childhood cancer, and so on. And in this case, it’s not moral evil unless you conceive of God Himself as immoral—for it was God himself who caused all this suffering and death.  Again we run into a problem.

So it’s not just physical evil that is a death blow to the Abrahamic conception of God, but also God’s own maliciousness as described in scripture, Jewish, Christian, and Islamic alike. Who wants to believe in a God who lets innocent people suffer and die? “God’s ways are mysterious,” answer the theologians, but yet they seem to know everything else about God. It’s just the hard-to-understand stuff that they fob off as “mystery.”

Auslander’s ultimate lesson is to be kind and try to mend the divisions between humans:

This year, at the end of the Seder, let’s indeed throw our doors open — to strangers. To people who aren’t our own. To the terrifying them, to the evil others, those people who seem so different from us, those we think are our enemies or who think us theirs, but who, if they sat down around the table with us, we’d no doubt find despise the pharaohs of this world as much as we do, and who dream of the same damned thing as us all:

Well, though Auslander’s  intentions are good, he’s wrong here. Not everybody dreams of peace. I know of certain Russians, for example, who dream of war.  So I’ll let Auslander have his “Imagine” moment here, but what I’d like NYT readers to take on board is Auslander’s argument against God from evil. It’s a syllogism:

a. God is omniscient, omnipotent and benevolent (assumption)
b. But the world isn’t organized as if it’s run by an omniscient and benevolent God (observation)
c. Therefore we must either conceive of a God who is malicious, weak, or sadistic, or else deny the existence of God.

I vote for the “no god” part of “c”. It’s more parsimonious.

I also vote for more such atheism in the NYT. After all Tish Harrison Warren spews her Anglican palaver in the op-ed section once a week. How often do we see an article like this? Shouldn’t atheism at least get equal time, especially given the absence of evidence for god?