We’re going to ease back into the Reader’s Wildlife Photos feature, though it might not be daily—at least for a while.  But it’s appropriate that our first contributor in a month is one of our most diligent regulars, Mark Sturtevant. Mark’s captions are indented (links are also his), and be sure to click on the photos to enlarge them.

Here are caterpillars that were photographed during July last summer.

First up are inchworms from the family Geometridae. Most are twig mimics as larvae, and that can make them hard to identify. I have no idea what the little green one is in the first picture, and not even BugGuide could identify it. 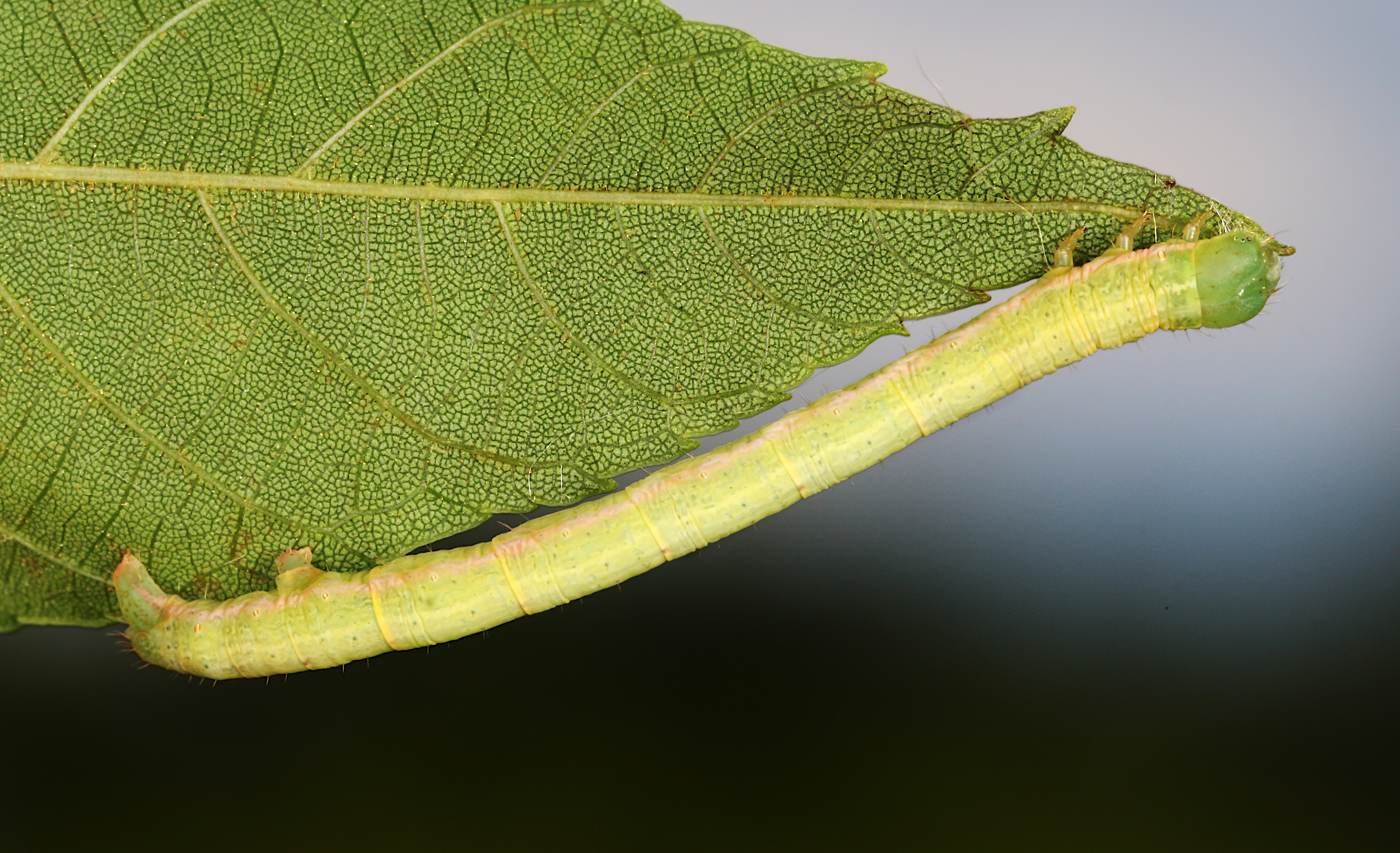 The next one should be pretty easy. This remarkable twig mimic is the larva of the oak beauty (Phaeoura quernaria). I find several of these each summer around our crabapple tree, which is one of its many host plants. 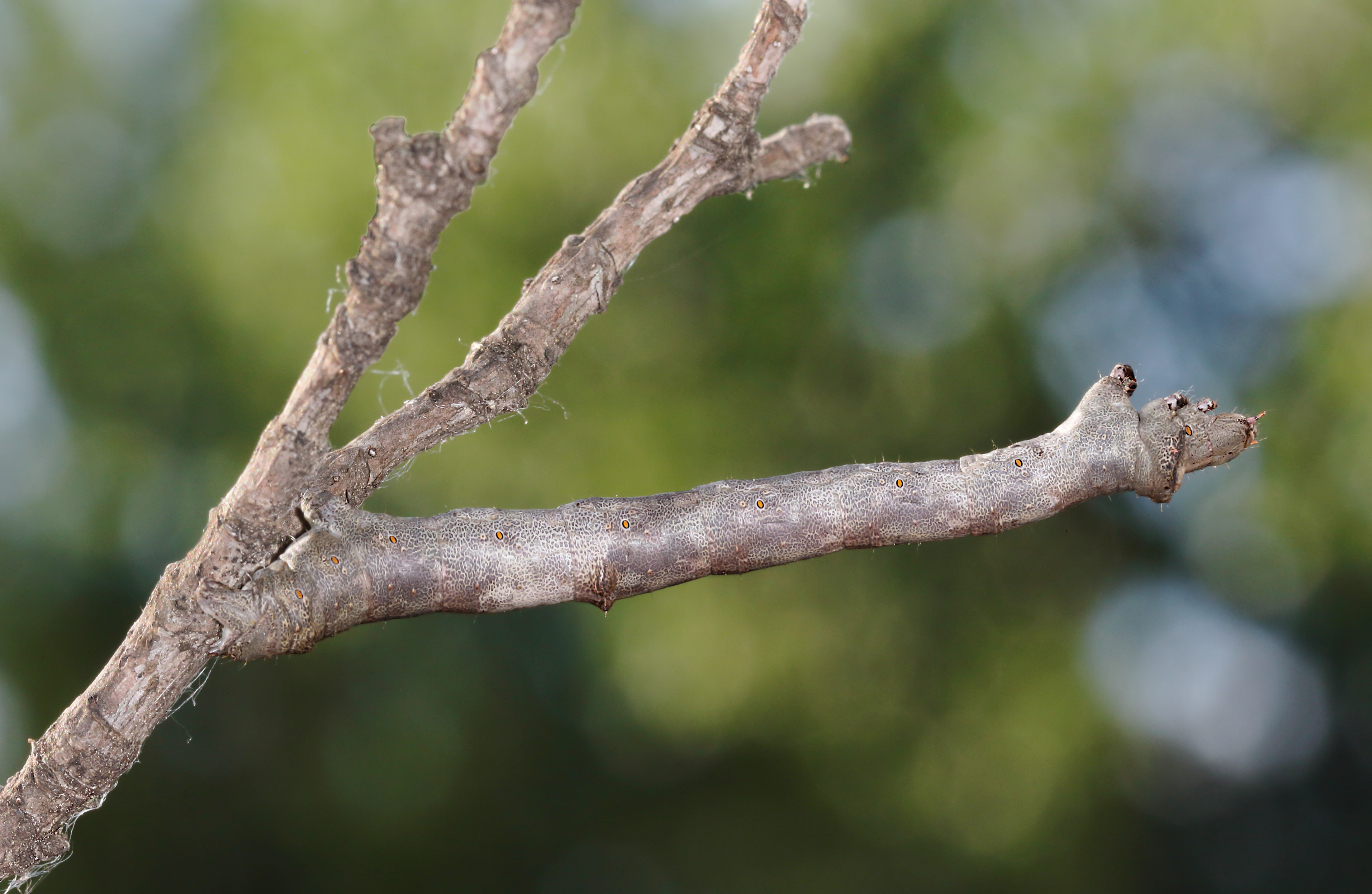 Another one that I see a lot is found on goldenrod. This is the larva of the common grey (Anavitrinella pampinaria). 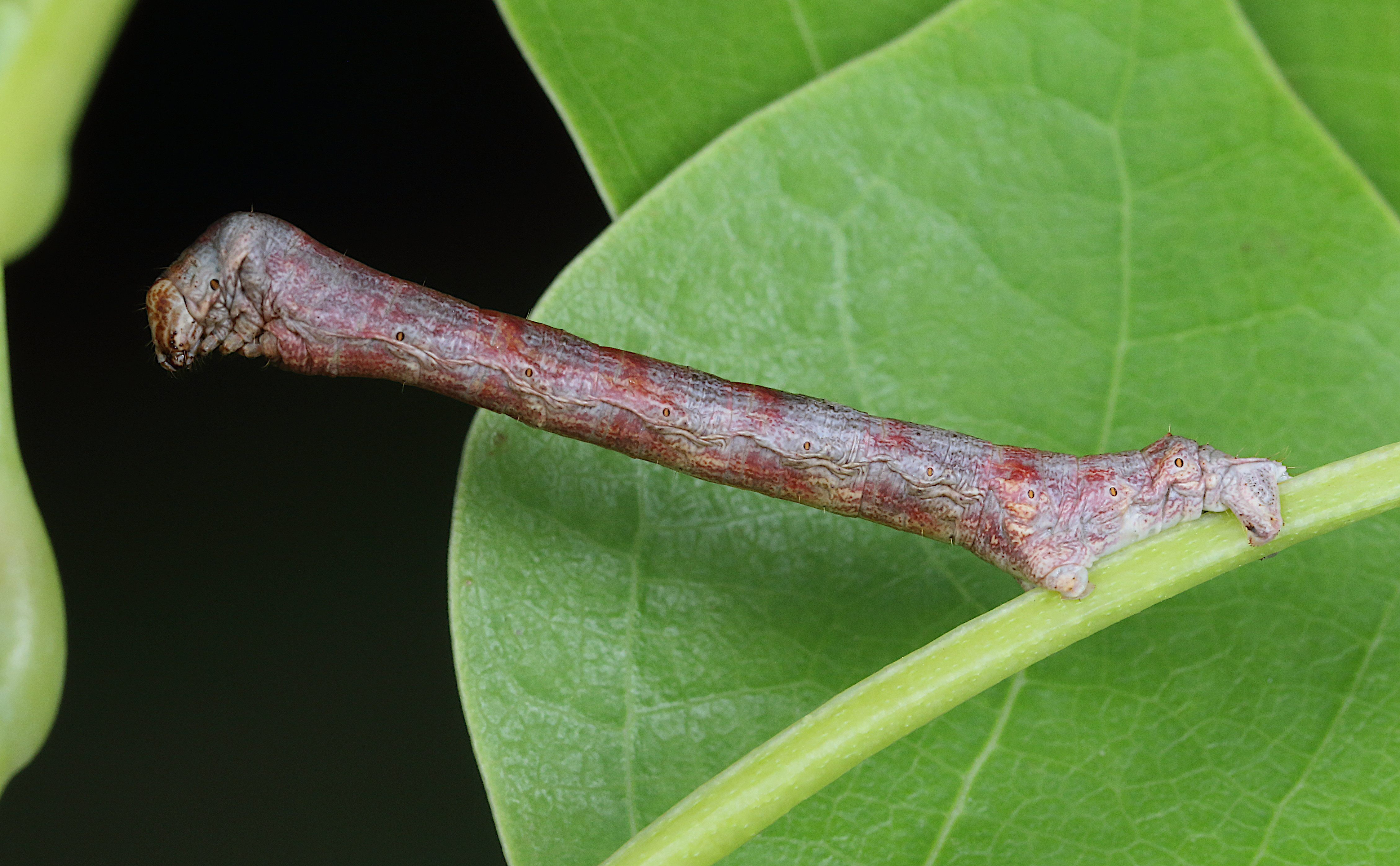 The very colorful inchworm shown next was definitely new to me. The kind folks at BugGuide were able to identify it, though. This is Lycia ursaria, aka the stout spanworm moth. The adults of this species are pretty robust in form. 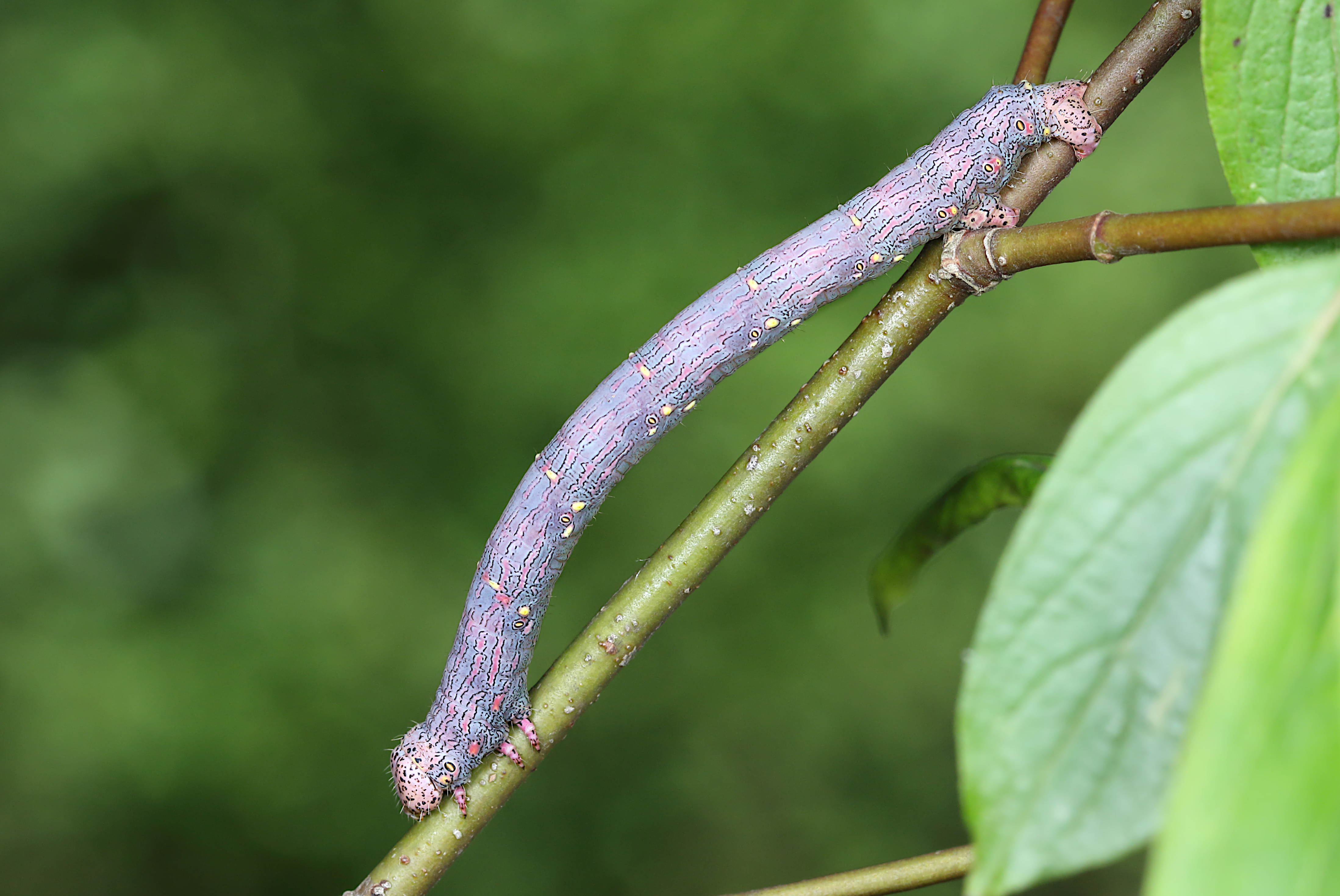 Next is the odd but rather beautiful funerary dagger moth caterpillar (Acronicta funeralis). They are described as being seldom seen, although I did find one last season too. Youngsters are bird dropping mimics, and they often sit in this curled up position to enhance that special look of a glob of bird poo. But mature ones like this continue the pose even though the effect is now quite lost. 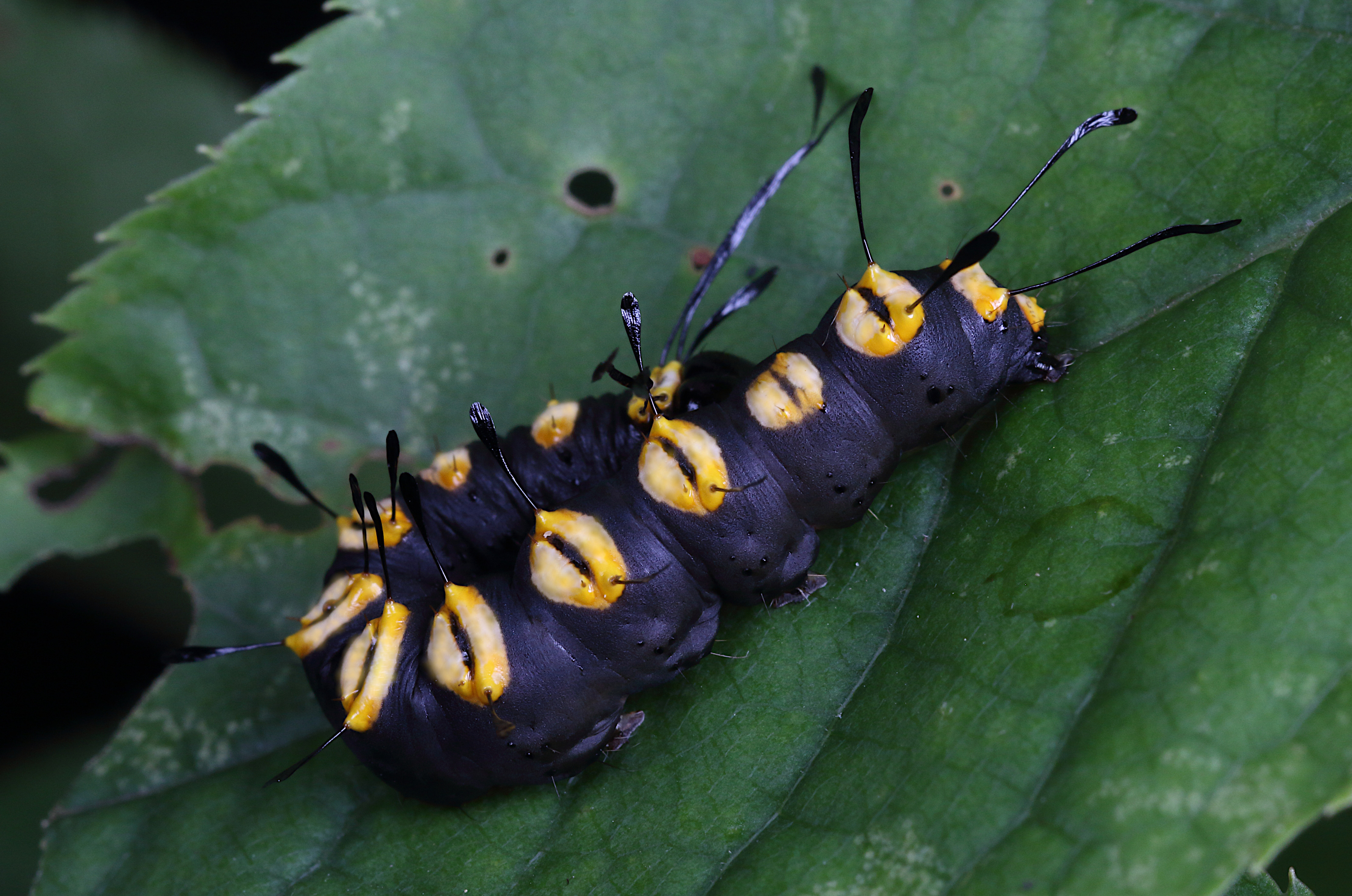 Here is a cluster of very young promethea moth caterpillars (Callosamia promethea). There were an equal number of empty eggshells nearby on the same leaf, so these had only recently emerged. They stick together like this while young, but as they mature they will gradually disperse. Promethea moths are in the giant silk moth family Saturniidae. If these caterpillars survive, they will steadily transform into lovely blue-green caterpillars the size of your thumb, and the adult moths will look like smaller versions of our giant cecropia moth. You can see all of this in the link above. 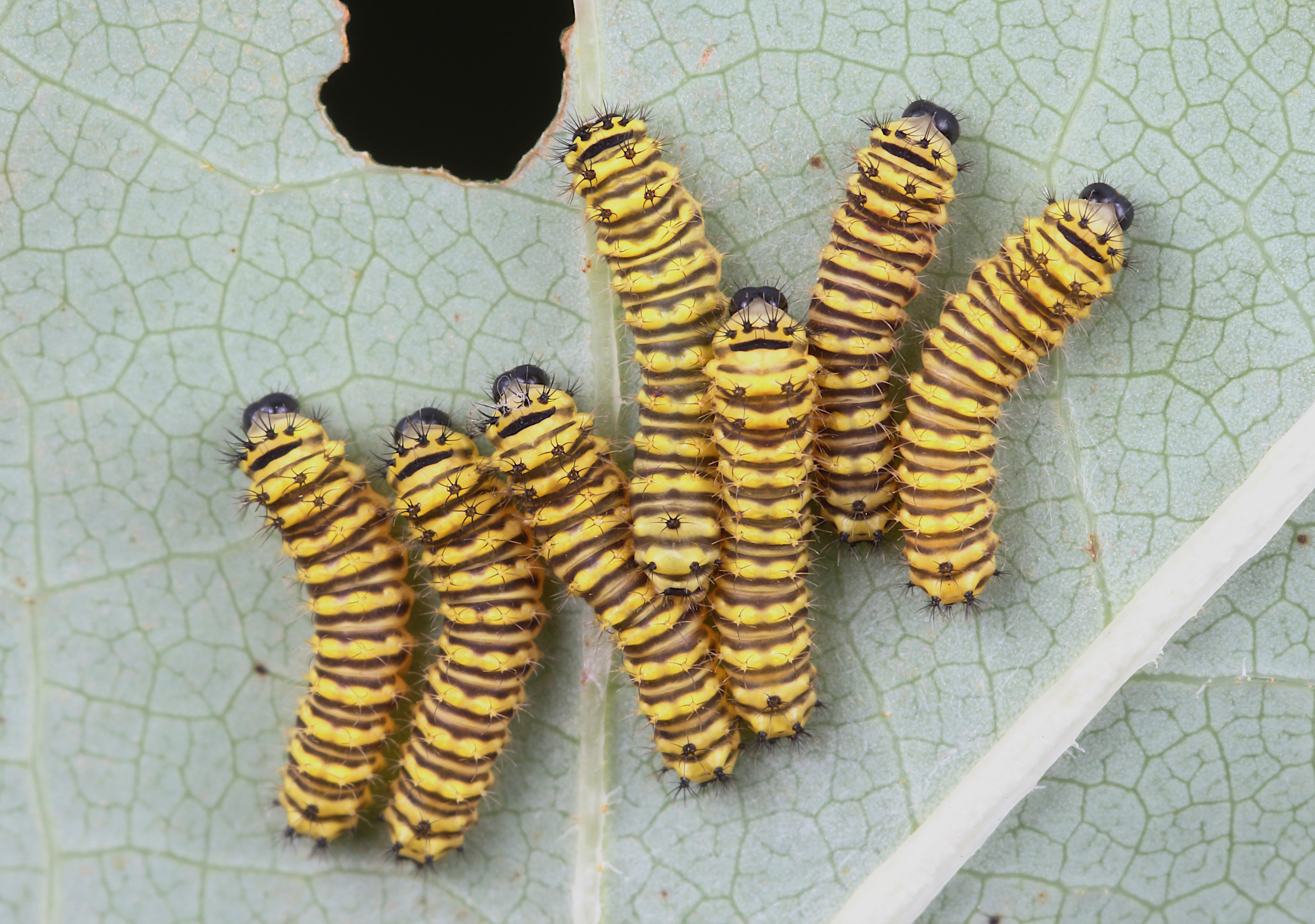 Next are two examples of a caterpillar that is a dead leaf mimic. They are the larvae of black-blotched schizura, Oedemasia leptinoides. That second one looks like it’s about ready to pupate. 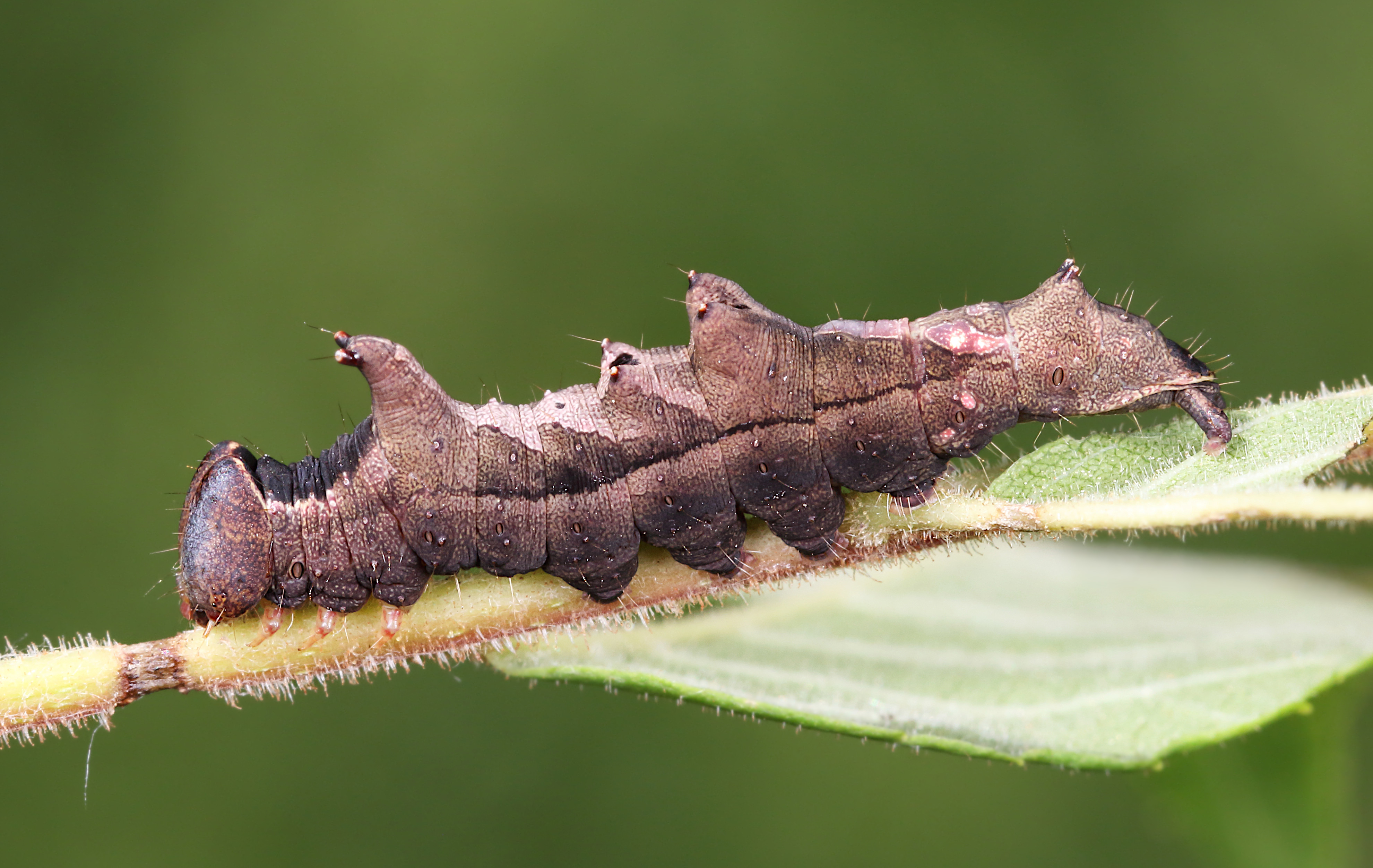 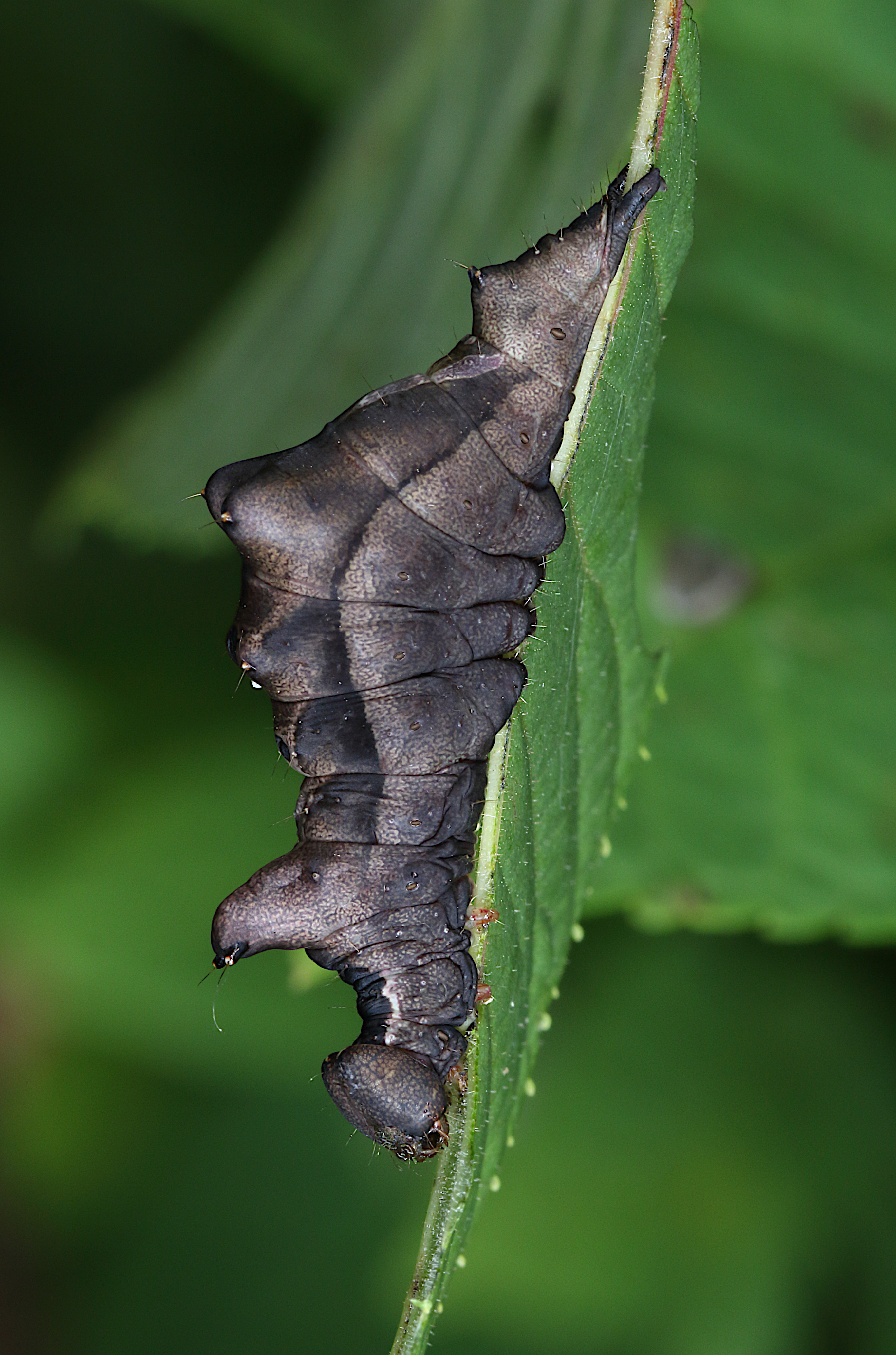 Caterpillars of the Eastern tiger swallowtail (Papilio glaucus) are shown next. When at rest, they commonly fashion a silk pad to sit on. Their false eye spots are thought to make them resemble the head of a green tree snake. When disturbed, they will evert a forked osmeterium, which both resembles a forked tongue but it also produces a repellant aromatic smell. 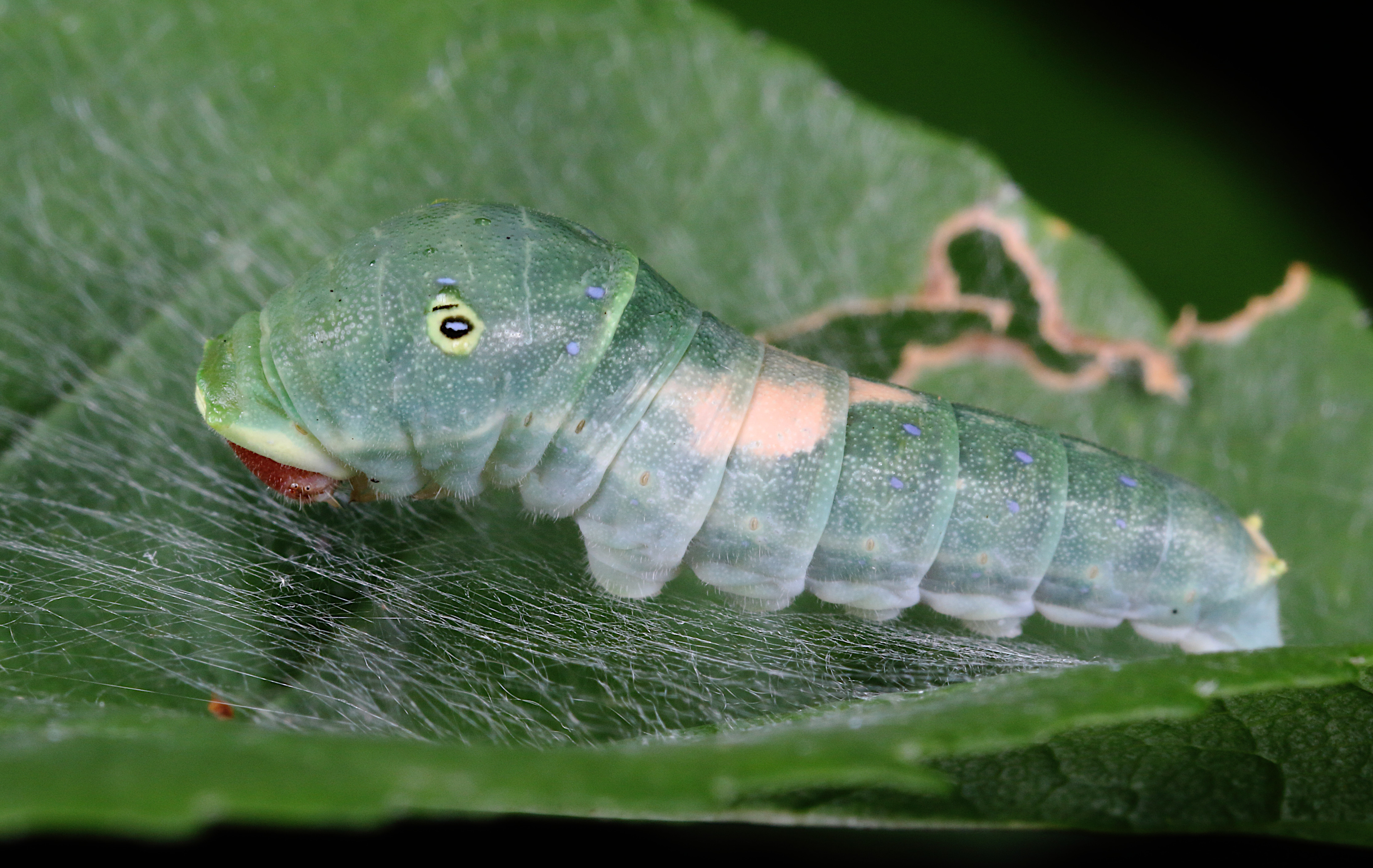 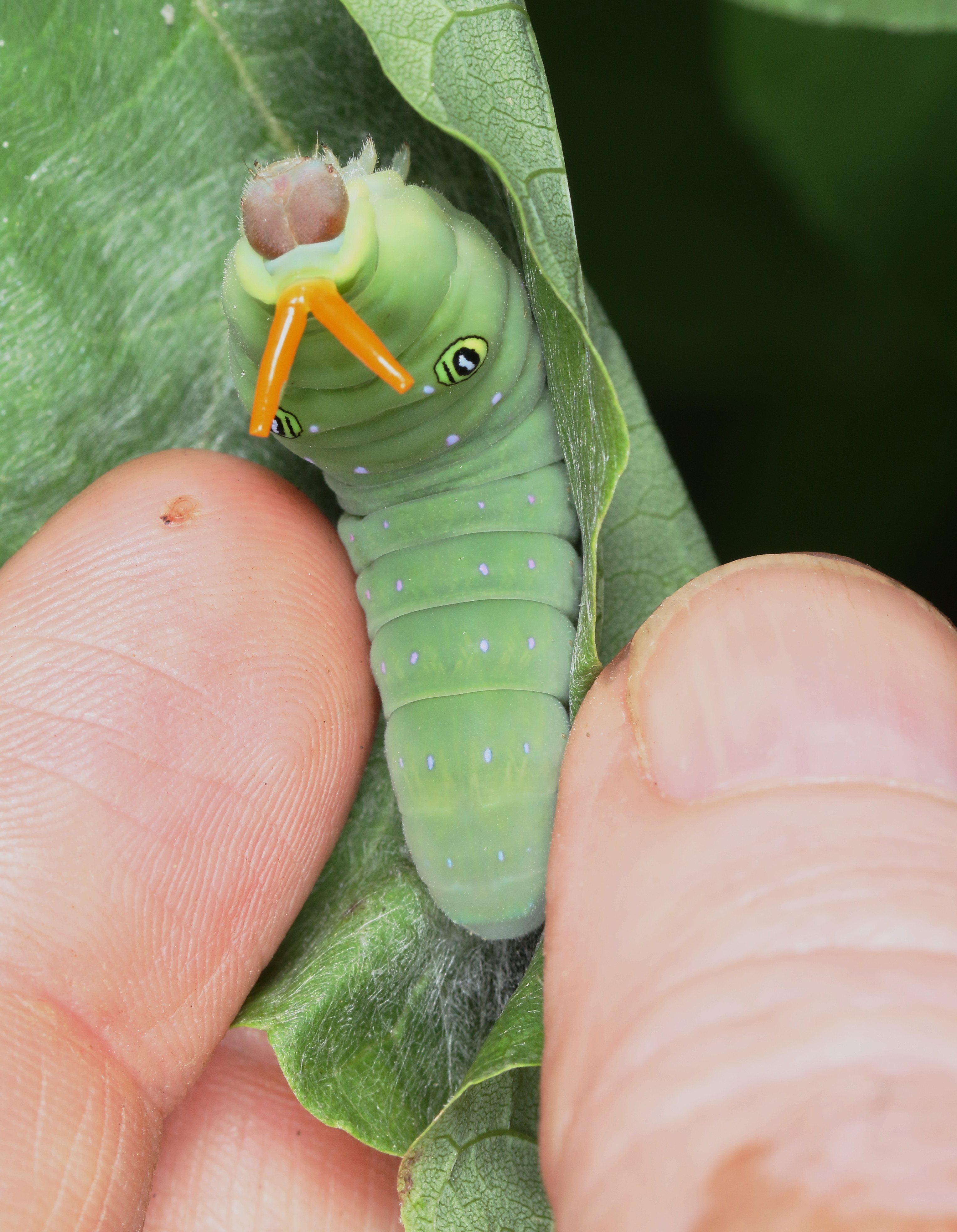 Finally, the insects shown in the last two pictures are yellow-necked caterpillars (Datana ministra). In certain parks, the young are commonly seen in hefty masses like this on walnut trees. This mass, which was equally distributed on both sides of the leaves, must have weighed about a pound. As they mature, they will disperse a bit more in the trees, but they remain quite gregarious so if one is seen, there will be several more nearby. The last picture is showing a mature caterpillar in its defensive posture, and it’s one of my favorite caterpillar pictures. 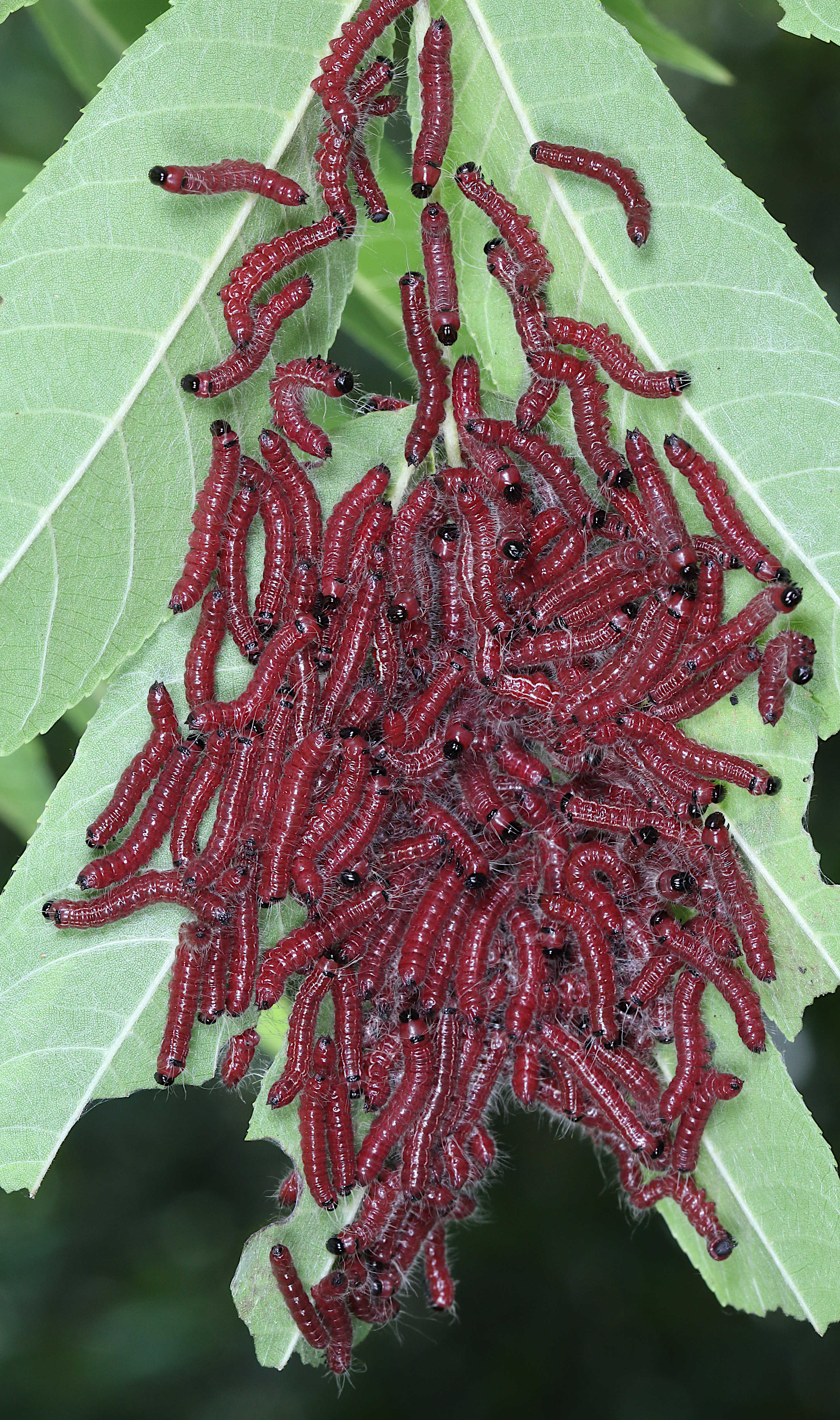 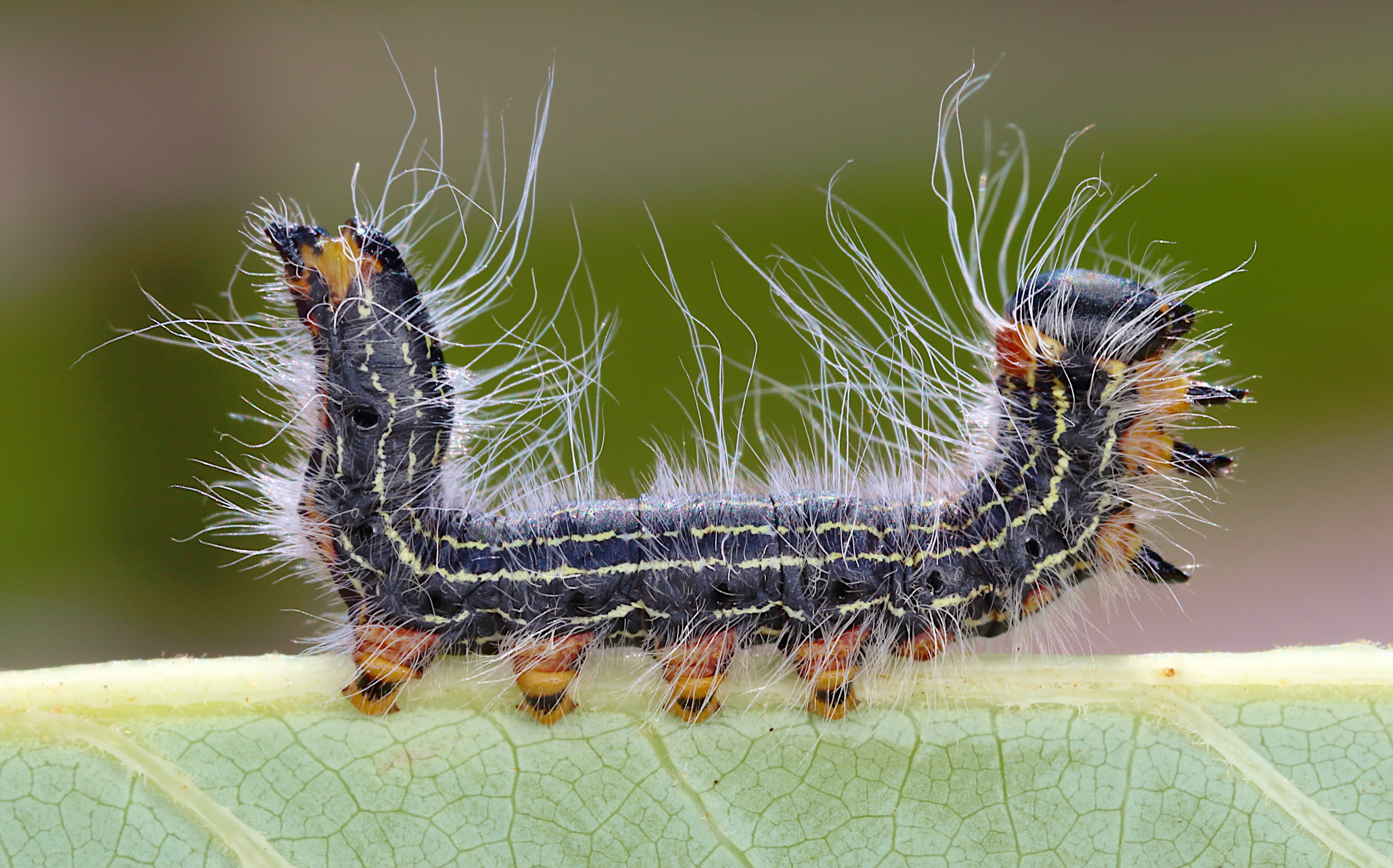