The University of Chicago offers a BA degree in Critical Race and Ethnic Studies, but it’s offered inter-departmentally, with faculty from the Center for the Study of Race, Politics, and Culture (CSRPC), which is not a department but a “research institute“. For several years, though, a group of faculty and students have been calling for their own department to support those studies. And now they’ve got one.  Until yesterday, I heard that the proposed new department, “The Department of Race, Diaspora, and Indigeneity,” was under discussion, and all I could find about it on the Internet was this (reproduced below):

CSRPC STATEMENT OF SUPPORT FOR THE DEPARTMENT OF RACE, DIASPORA, AND INDIGENEITY

On November 17, 2021, the Division of the Social Sciences is convening all social science faculty for an advisory discussion and vote regarding the proposal for a Department of Race, Diaspora, and Indigeneity. In solidarity with years of student advocacy and in acknowledgment of the work of our dedicated colleagues, the CSRPC is excited to witness this historic vote on the department of Race, Diaspora and Indigeneity in the Social Science Division and look forward to its presence at the University of Chicago. We believe that departmentalization is a crucial and momentous step in supporting scholarship and training on race, politics, and culture at the University. The innovative design of juxtaposing race, diaspora, and indigeneity–concepts and practices that have evolved in tandem with the modern world—has the potential to offer new paradigms for thinking across a constellation of conversant fields, including disciplines that have been established according to area, racial identity, or ethnicity.

The CSRPC envisions a strong relationship with the proposed department, as the Center continues to serve as a research and programmatic meeting ground for faculty, staff and students across the University and partners with community leaders and civic organizations in Chicago’s southside and beyond. We look forward to welcoming the Race, Diaspora, and Indigeneity department as an exciting strategic and collaborative partner that will strengthen and enhance our work as related yet distinct entities.

The need for a separate department is justified as “supporting scholarship and training on race, politics, and culture”.  Now, as of yesterday, the department has become a reality after an overwhelmingly positive vote of the Faculty Council. This morning the new President of the University, Paul Alivisatos, as well as Provost Ka Yee C. Lee, issued this announcement: 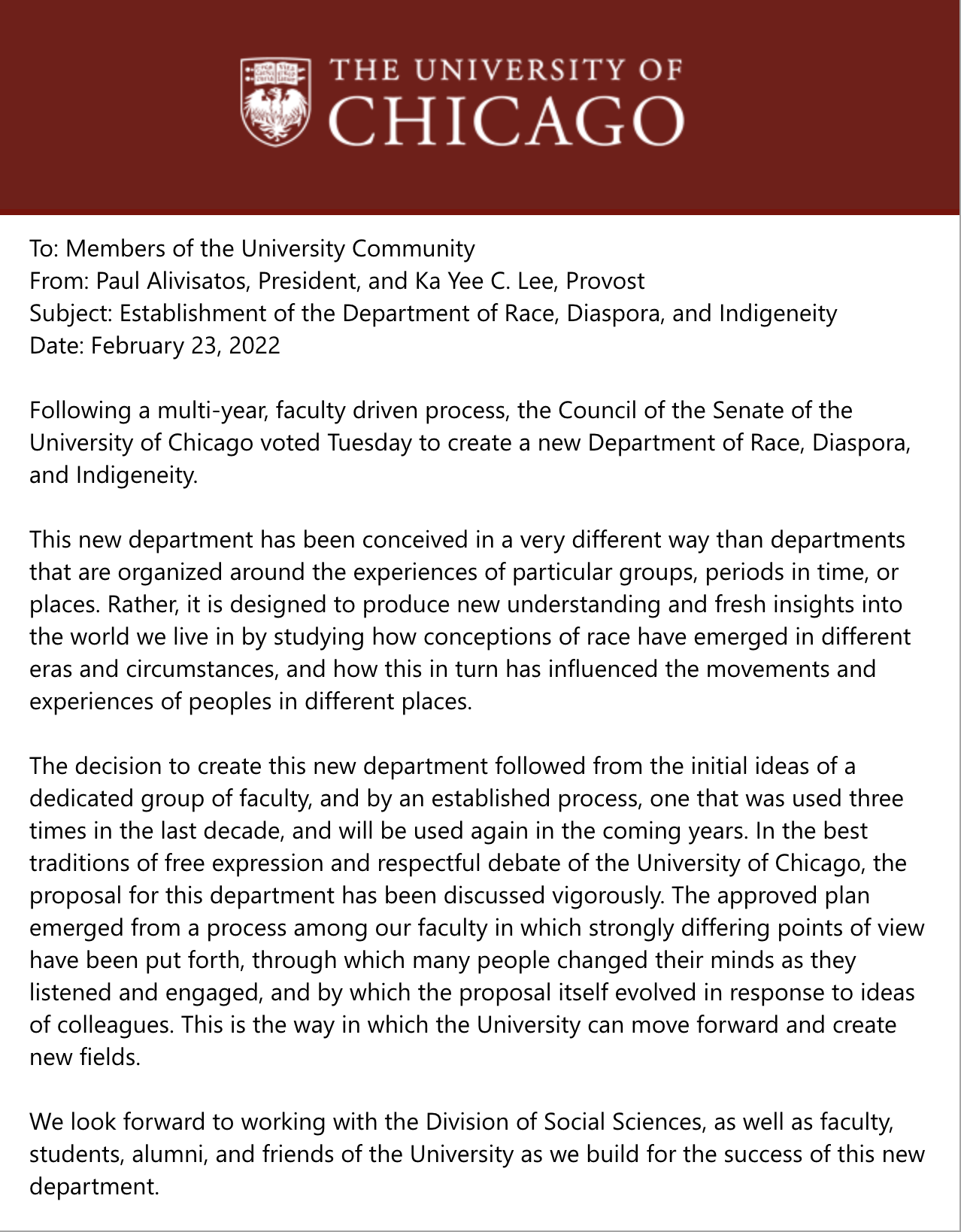 I don’t know much about this department, and there’s surely no course list, but of course I have concerns. Since the department hasn’t yet taken shape, and I haven’t seen a rationale beyond what’s above, I’ll wait for a bit and see how things shake out. [UPDATE: Somehow I missed the rationale behind the proposal, which is here, and so I’ll report back after reading it carefuly.)

But I’ll confess that it’s worrying. One thing that concerns me is that the creation of this department seems motivated more by ideological currents than by scholarly need. What was the need? What is the intellectual rationale that wasn’t met by the present degree-granting program? Further, I am unsure what the announcement means by saying the department was “conceived in a different way from [sic] other departments that are organized around the experiences of particular groups, periods in time, or places.”  I presume that this means the department will not concentrate on individual identities, but will take an “intersectional” approach incorporating various groups.

And I’m concerned above all—yes, I’m a worrier—that this will begin an unstoppable erosion of the features made Chicago unique among American universities: a freedom from political and academic trends, at least in principle, and an emphasis on rigor and free expression. The school had no “dogma”, no “approved way of thinking,” a principle embodied in our Kalven Report.  We were a school that differed from, say Harvard, because we had very little social prestige, but on the other hand enjoyed a worldwide  reputation for research and academic rigor. I am worried that this department will, as similar departments in other places have, promote an accepted “way of thinking” that brooks no dissent.

I came here because of the academic rigor, giving up a comfortable and easier life, and a big house in the Maryland suburbs, so I could rub elbows with the members of the best ecology and evolution department in the country. It was hard, but immensely stimulating. Best colleagues around, and fiercely motivated students.

It’s that rigor, and complete intellectual independence, that lured lots of other faculty and students to the school. Many of our faculty could have gone to the “prestige schools” like the Ivies, but repeatedly turned down outside offers because of our unique intellectual climate.

Will we still have that climate, or are we being buffeted by the winds of fashion? If it’s the latter, I’d become deeply pessimistic, even though I’m retired. I still retain a substantial pride at even being associated with this place. It seems to be changing so fast!

As I said, I’ll see what the new department has on offer before I weigh in, and that might be a while! But I encourage readers to offer their own takes below. 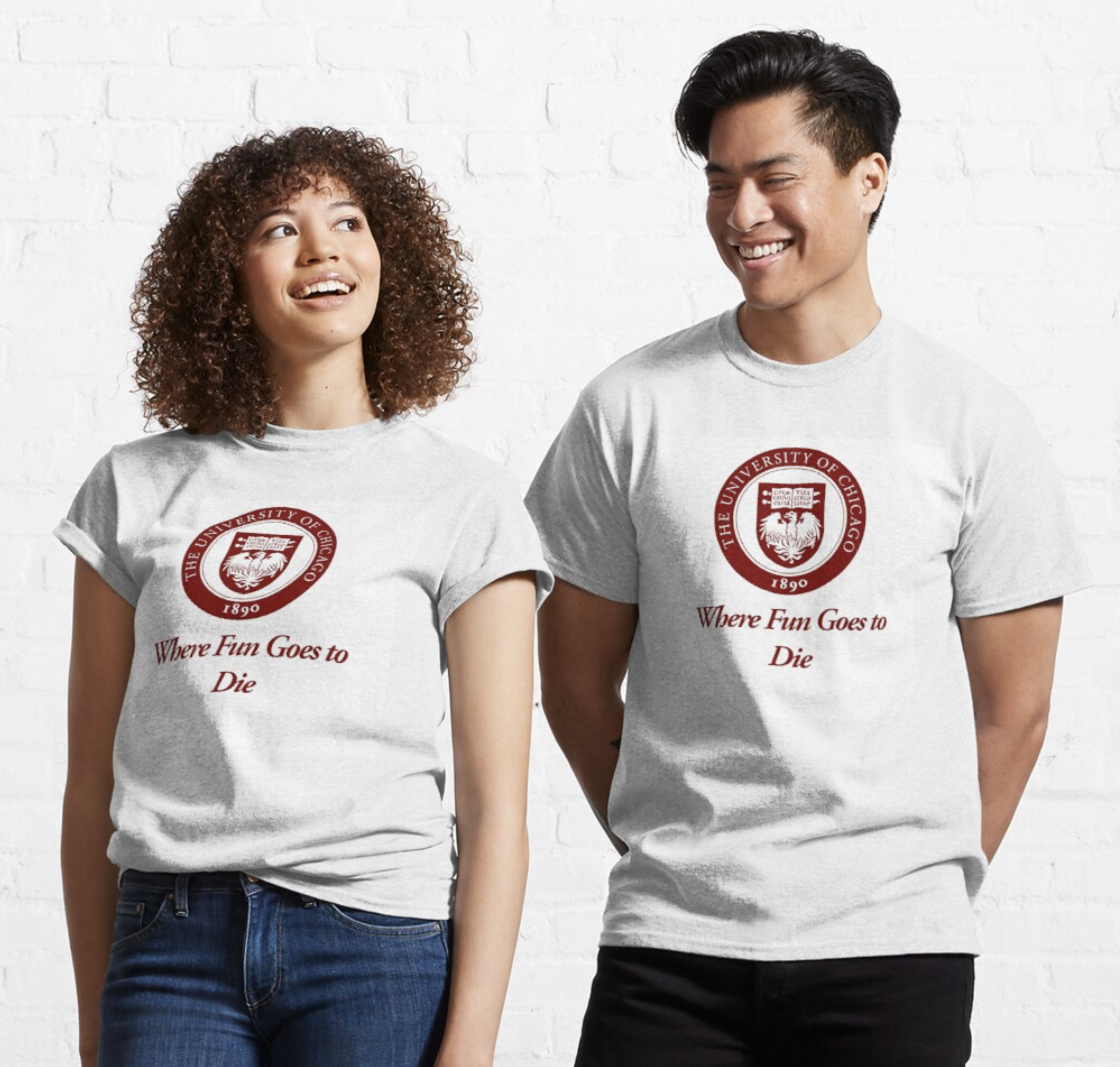 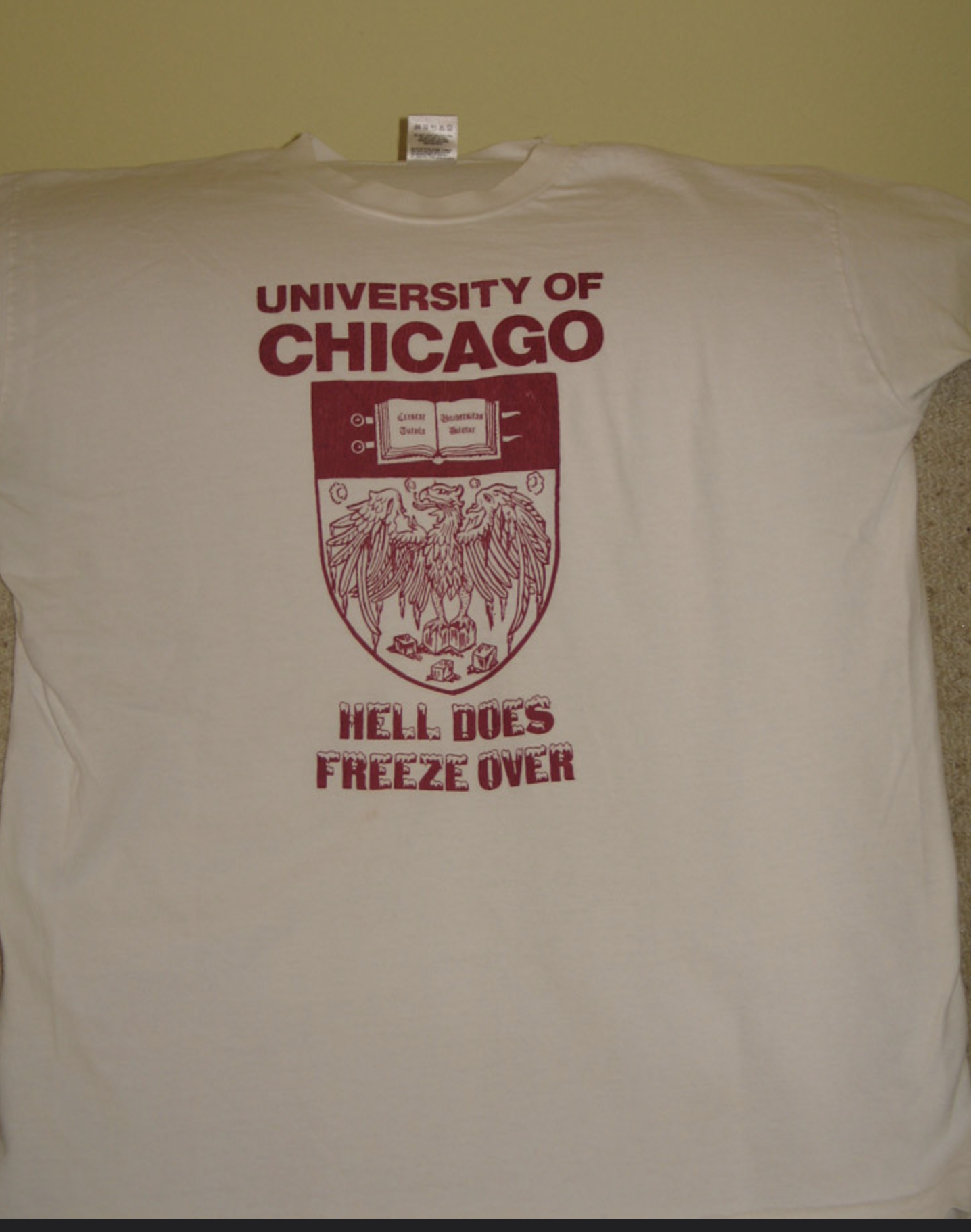 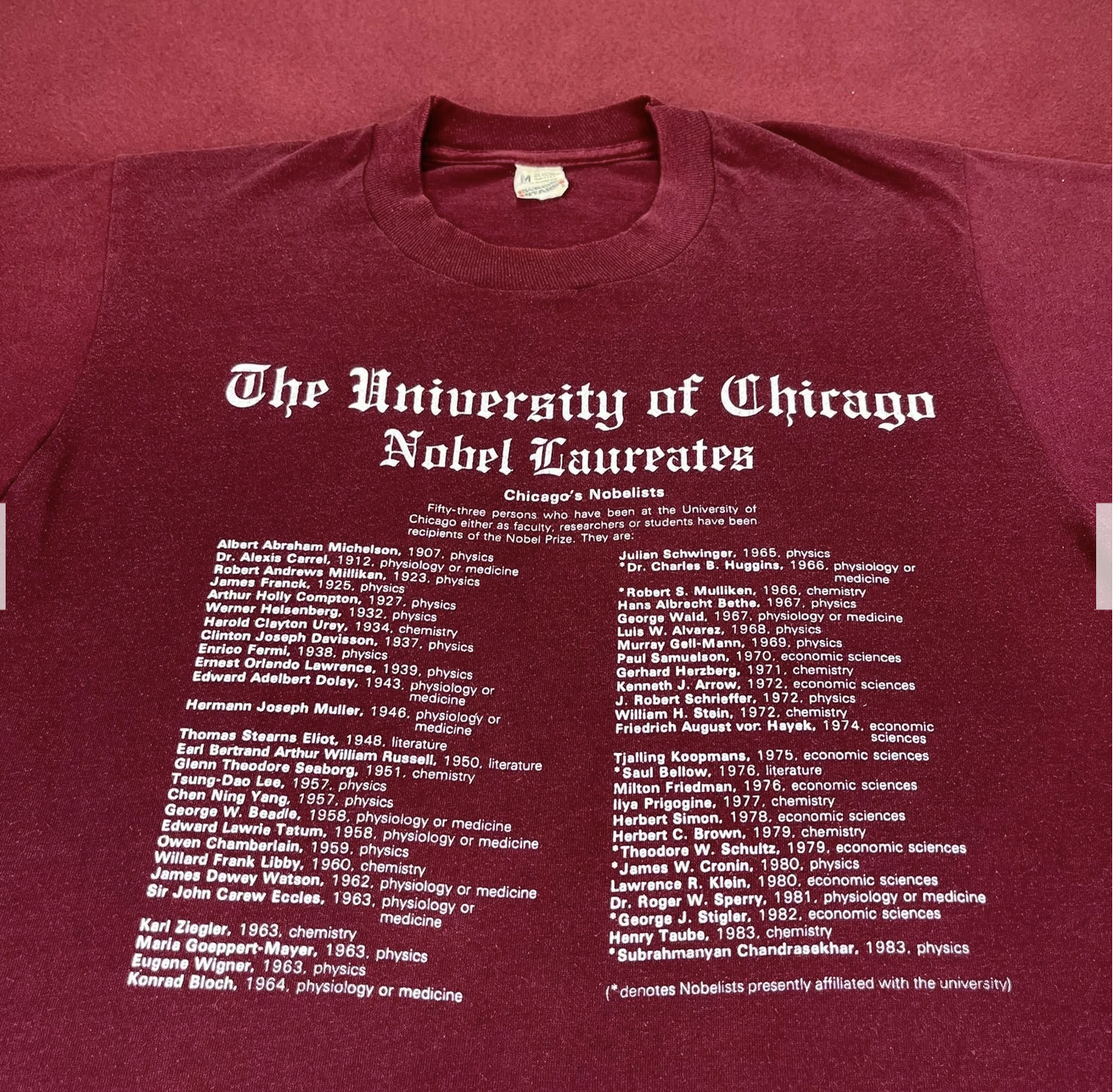 38 thoughts on “We have a new department”