I’m not sure exactly who N. S. Lyons is, but I presume some of our readers know and can enlighten me.  I don’t even know whether Lyons is a he, a she, or something else, as all the Substack Column (“The Upheaval”) says about Lyons is this:

An analyst and writer working in Washington, D.C.

Lyons is also a pessimist, because he/she/whatever has penned one of the most depressing articles I’ve seen in months.  It’s about how Wokeness (or what some people call “the successor ideology”) will be with us for a very long time, for the forces that created it and are sustaining it are hard to dislodge.

I’ve gone back and forth on this issue, but as time passes, and I’ve lost a few battles against Wokeness (mostly about re-naming or erasing historical figures), I’ve come to realize that those who maintain it are not only acolytes of a religion, as John McWhorter asserts, but are also loud, entrenched, close-minded, and, as time passes, slowly seeping into the organs of power in America—and the UK and Canada as well.  If you read Lyons’s long essay, below (click on screenshot, but subscribe if you like the site), you will be depressed.

Very depressed. I read this January essay two nights ago, and again last night. I thought I could extricate some hope from the second reading, but it wasn’t possible. It just got me more depressed.

Originally I thought that science, at least, would be immune to the phenomenon, as science is evidence-based and Wokeness mostly a faith, but that isn’t happening. Science departments came late to the party, but now they’re busy purging the Impure at dizzying speeds. Even at Chicago, science departments are posting—in violation of University policy—political and ideological manifestos. And even in my own department the hundred-odd photos of tenured faculty over the last hundreds years, including conservatives like Dick Levins, Dick Lewontin, and Monty Lloyd, (LOL)., have been removed from our seminar room because, being mostly white males (but with an increasing number of women as time goes on), the pictures made some people uncomfortable and were said to be discouraging people from coming here. We (including me) have been purged from departmental history solely on the grounds of sex and pigmentation. More on that another time.

Lyons first gives a list of all the articles predicting the end of Wokeness (that’s what we’ll call it), and then takes them apart. The idea that Wokeness will soon vanish is a phantasms, and of wish-thinking contradicted by empirical observation, and Lyons gives twenty reasons why it’s here to stay. 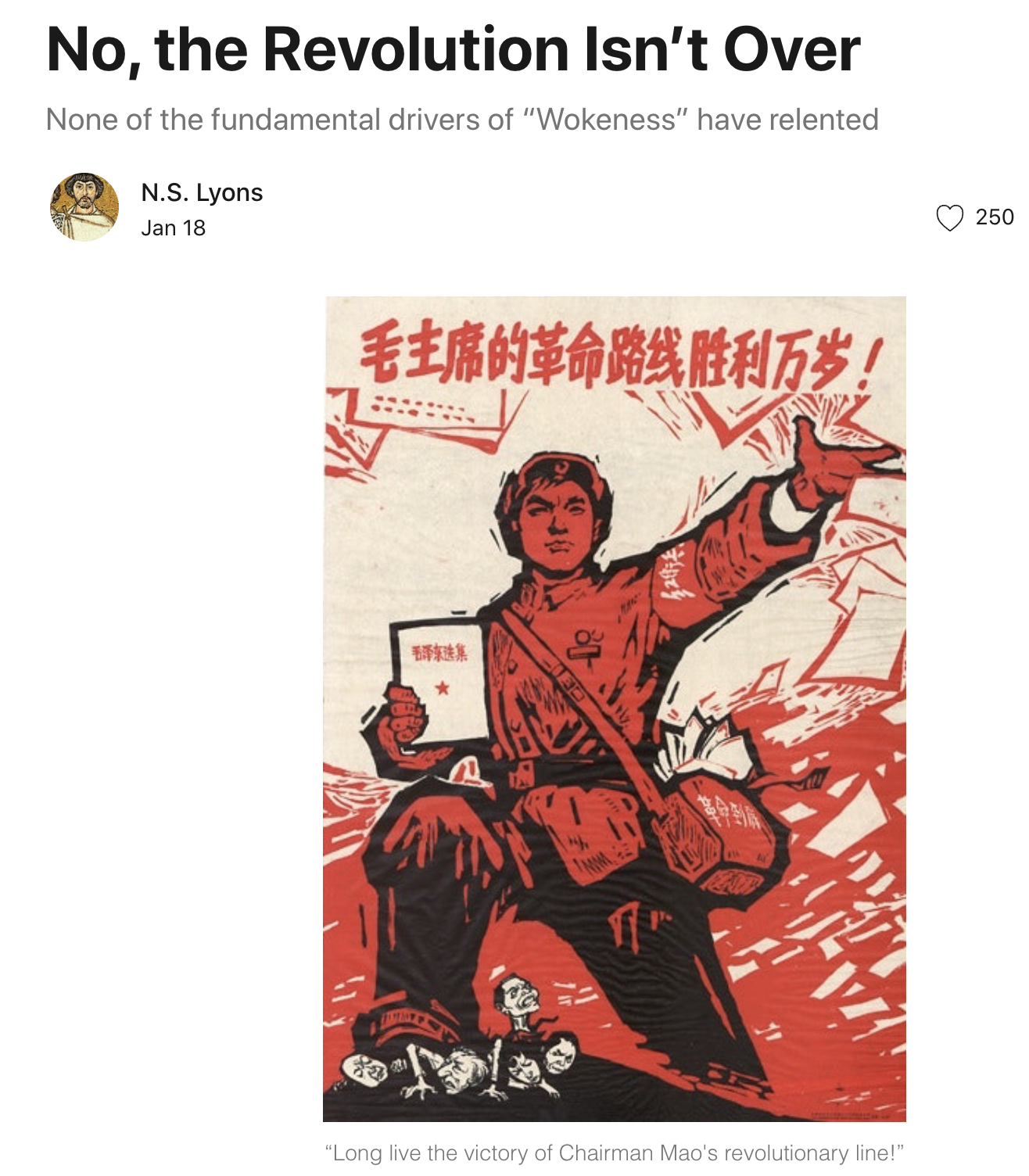 There’s simply too much here to quote and discuss, but let me give just three of the 20 reasons that Lyons thinks the “revolution” will continue. Get ready to be sent to the country! Lyons’s words are indented.

These are what I see as the most important reason why Wokeness is lodged in America (and especially American academics) as firmly as a raspberry seed is between your teeth. (I just ate raspberries). The argument “that one does not simply walk away from religious beliefs” is important, but McWhorter has dealt with that, and I have other fish to fry. The numbering is are Lyons’s own from his list of 20 reasons, and excerpts are indented:

8. Majorities don’t matter. Unfortunately for those dreaming of harnessing a majority anti-woke popular will, the truth is that, as statistician and philosopher Nassim Taleb has explained in detail, it’s typically not the majority that sets new societal rules, but the most intolerant minority. If the vast majority generally prefers to eat Food A instead of Food B, but a small minority is absolutely insistent on eating Food B and is willing to start chopping the heads off of anyone who disagrees and serves Food A – and the majority doesn’t care enough to get all bloody dying on this particular culinary hill – all restaurants will soon be serving only Food B, the new national cuisine. This is especially true if the intolerant minority already holds a disproportionate position of influence within the system, given that…

I haven’t read Taleb, but this rings true. Those who are taking over science departments are a minority, and most people aren’t on board with them, but it’s simply too much trouble to oppose them, on top of the possibility you’ll be called a racist (another reason).

This is one of the most depressing claims, but it’s true:

10. All the institutional high ground is still occupied. Have the top universities already been retaken from the woke, or replaced? (No, one still imaginary university in Austin doesn’t count.) What about the elite finishing schools? The accreditation companies? Most mainstream news media? The social media companies? The publishing houses? Hollywood? The major foundations? The non-profits and the think tanks? The consulting and accounting companies? The investment banks? The NASDAQ? The digital service providers? The HR departments of the Fortune 500, and most of their boards? The law schools? The Bar Association? The permanent federal bureaucratic state? Heck, even Halliburton? No, at such a ludicrous suggestion the Cathedral merely echoes with the mocking laughter of the new woke high clerisy. They know from experience that…

But wait! There are twenty of these. One more:

15. “Wokeness” is still required by law. Why are America’s university presidents and CEOs so terrified of their Gen Z students and employees, capitulating immediately to their every demand? Is it because Twitter has become basically their entire world? Do they, as Theodore Roosevelt once said of William McKinley, just have “the backbone of a chocolate eclair”? Probably a bit of both. But likely much more important is that they are terrified of the law.

The scope of U.S. federal antidiscrimination statutes that grew out of the Civil Rights Act of 1964 have already made the core facts of what people think of as “Wokeness” the law of the land. This includes the concept that all disparities are due to discrimination (“disparate impact”), the requirement that employers relentlessly police private speech that could be in any way offensive to any “protected class” (to prevent a “hostile work environment”), and “affirmative action” in hiring. Moreover, the law as written is so deliberately vague in its language that any new claims to rights raised by any protected identity group can be seamlessly slipped into the body of harms that any company or organization must legally prevent. So, for example, if any employee refuses for whatever reason to refer to another employee by their chosen gender pronouns, the entire company is in real danger of being held liable for violation of Title IX and Title VII by permitting discrimination on the basis of sex (as affirmed by the Supreme Court in its Bostock decision). Or at least so the company must assume, because the potential financial penalties are far too high to risk it. The nonconforming employee is getting the boot – unless they themselves are of a protected class that could conceivably sue for being fired due to their identity…

The safest path through this regulatory mess is simply to hire a very large HR department staffed with “experts” in all these rules and let them handle it, including by subjecting employees to a vast numbers of “training sessions” run by DEI consultants, all of which can if necessary then be pointed to in court as evidence that the company was definitely doing everything it could to prevent any discrimination from occurring.

Each of these is depressing in itself, and when you get twenty, it’s like a psychological death from a thousand cuts. If you want to be conversant about “The Successor Ideology”, this is a must read. Yes, it’s long, but I trust that readers her can deal with about nine single-spaced pages of reading in 9-point type. 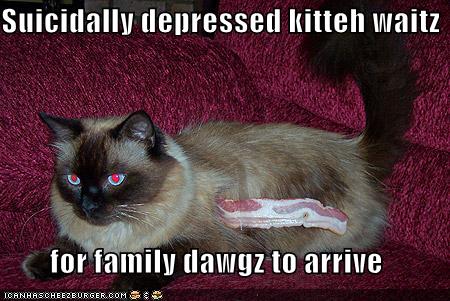