Today we’re featuring pictures of fungi by reader David Jorling. His notes and IDs are indented, and you can enlarge the photos by clicking on them. The identifications of many of the mushrooms are unknown or ambiguous, so fungus-friendly readers can help. Thanks!

At last, here are some photos I took of mushrooms while taking a walk through Tryon Creek State Park in Oregon last fall.  This park is located on the northern border of Lake Oswego, and there is a trailhead about 200 yards from my house.  The identifications I have listed below are from one of those fold-out laminated plant and wildlife guides that are purchased at the visitor center.  But my identifications should be taken with a grain of salt, as I cannot claim to have any expertise with respect to mushroom identification.

An Overhead shot of what I suspect are “Cluster Coincaps” which grow “In dense clumps on decaying conifer wood”. 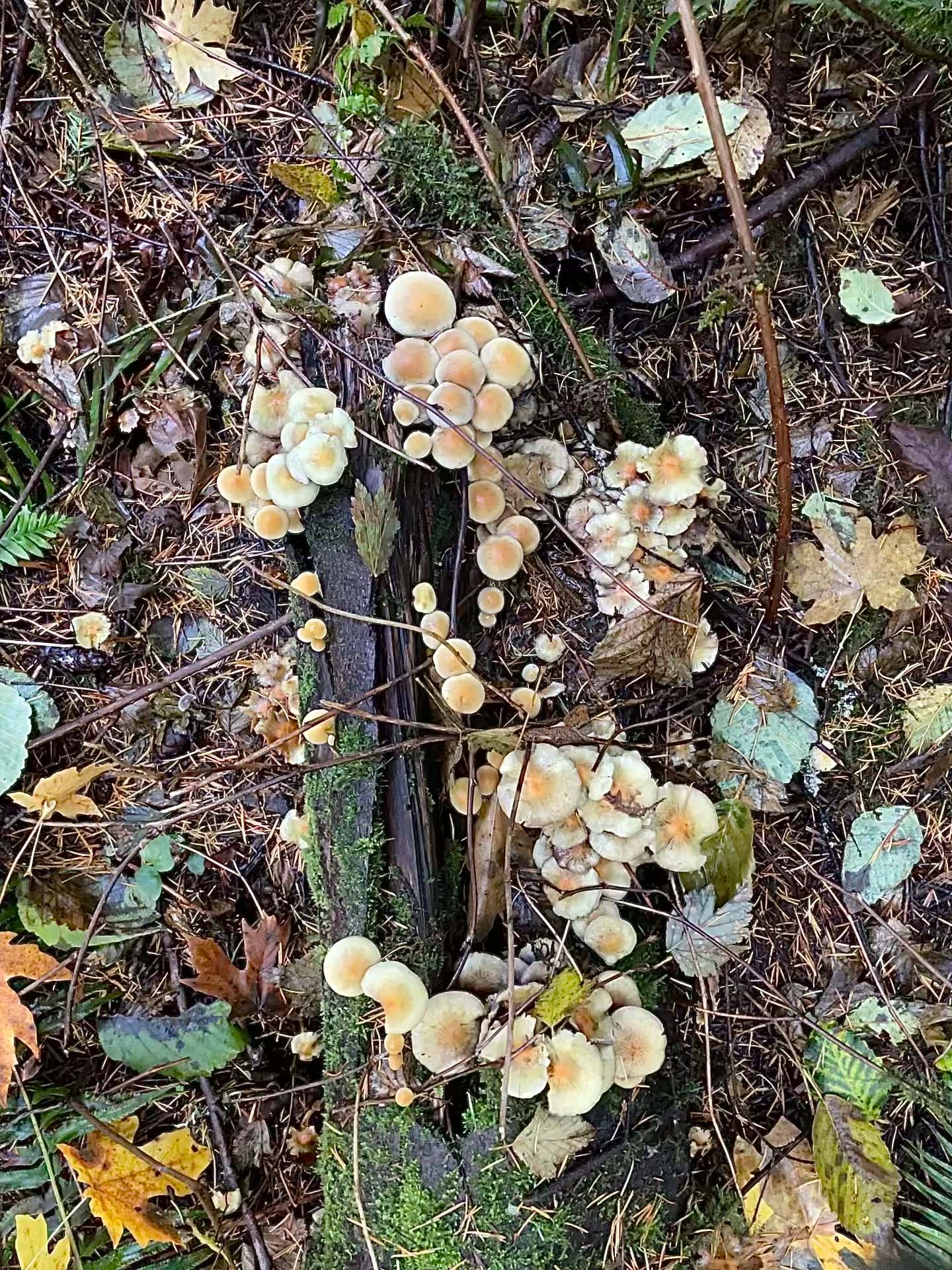 I suspect these are “Cat’s Tongues“. (The foldout’s apostrophe, not mine.  I suspect all cats have only one).  The card said, “One surface has short teeth”.  I did not know that when I took the picture so I did not get close enough to inspect. The card also says it grows “On well-rotted wood” which is not the case here, but it is the whitest mushroom on the card and best matches the shape. 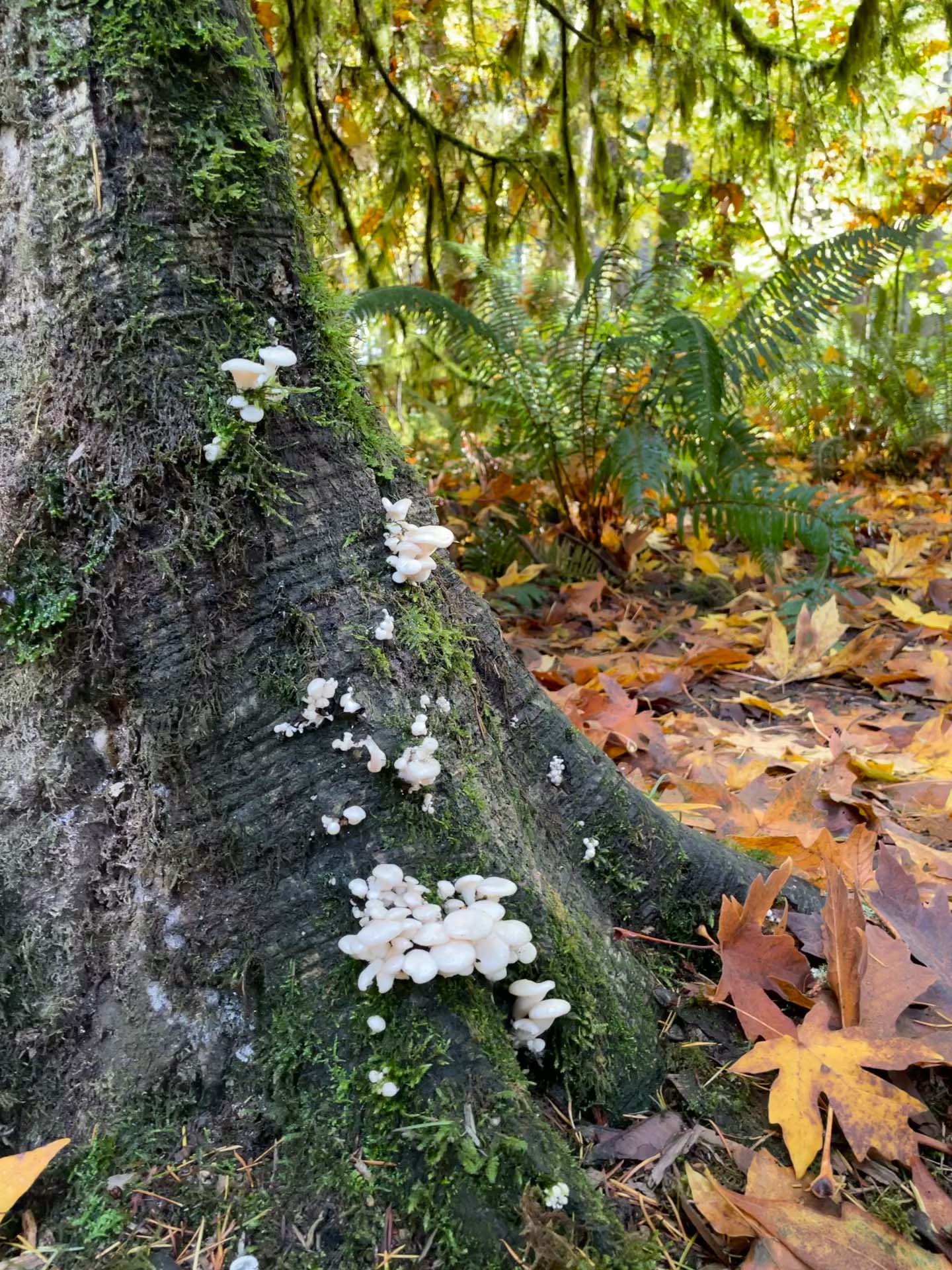 I think these are “Deadly Skullcaps” which grow “On wood, often in clusters”.  The card says they are “lethal little brown mushrooms”. 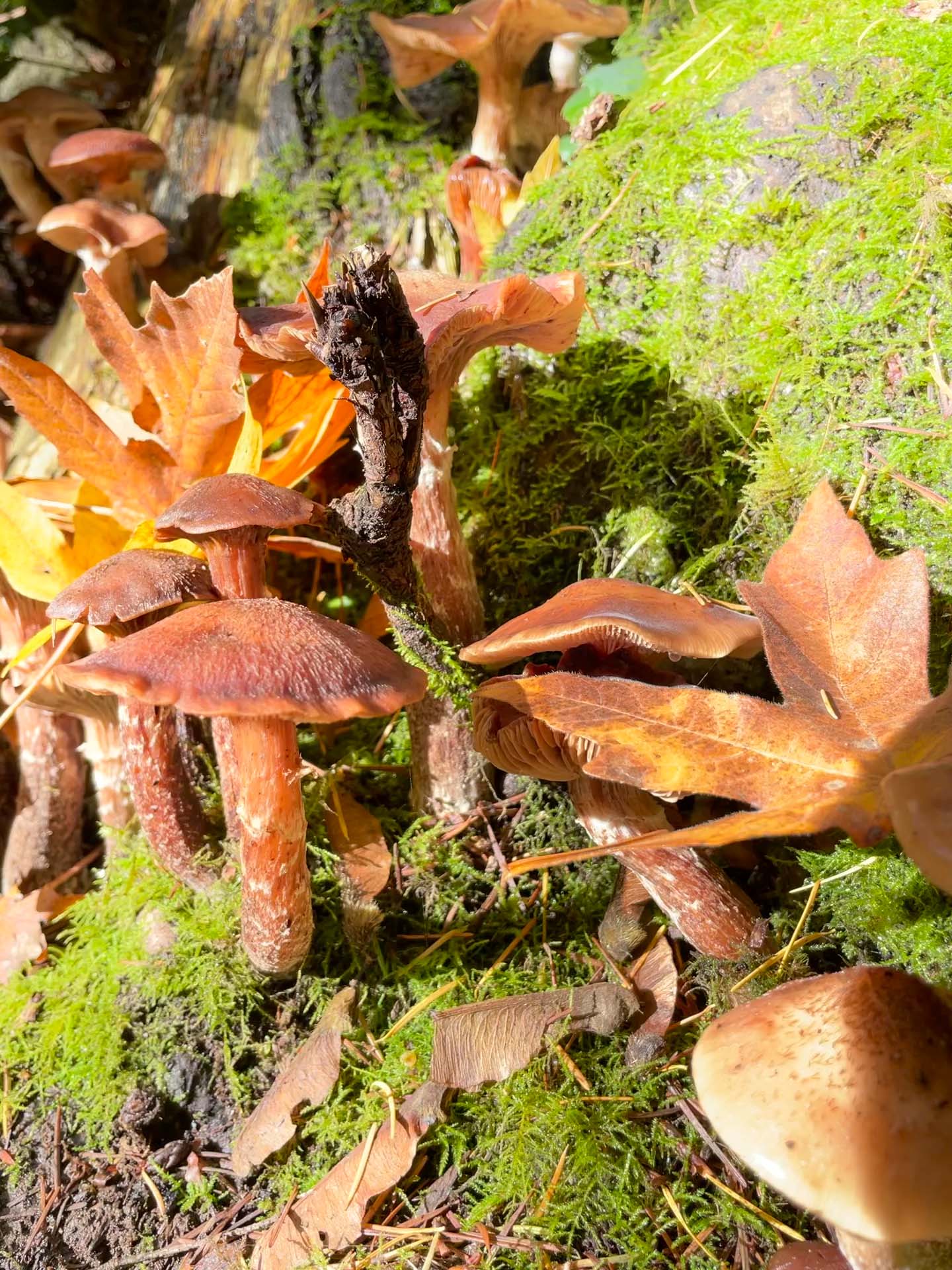 I think this is a “Turkeytail“, which grows “On decaying Hardwood” which appears to be the case here. Look closely and you can see raindrops on the undersides of the edges. 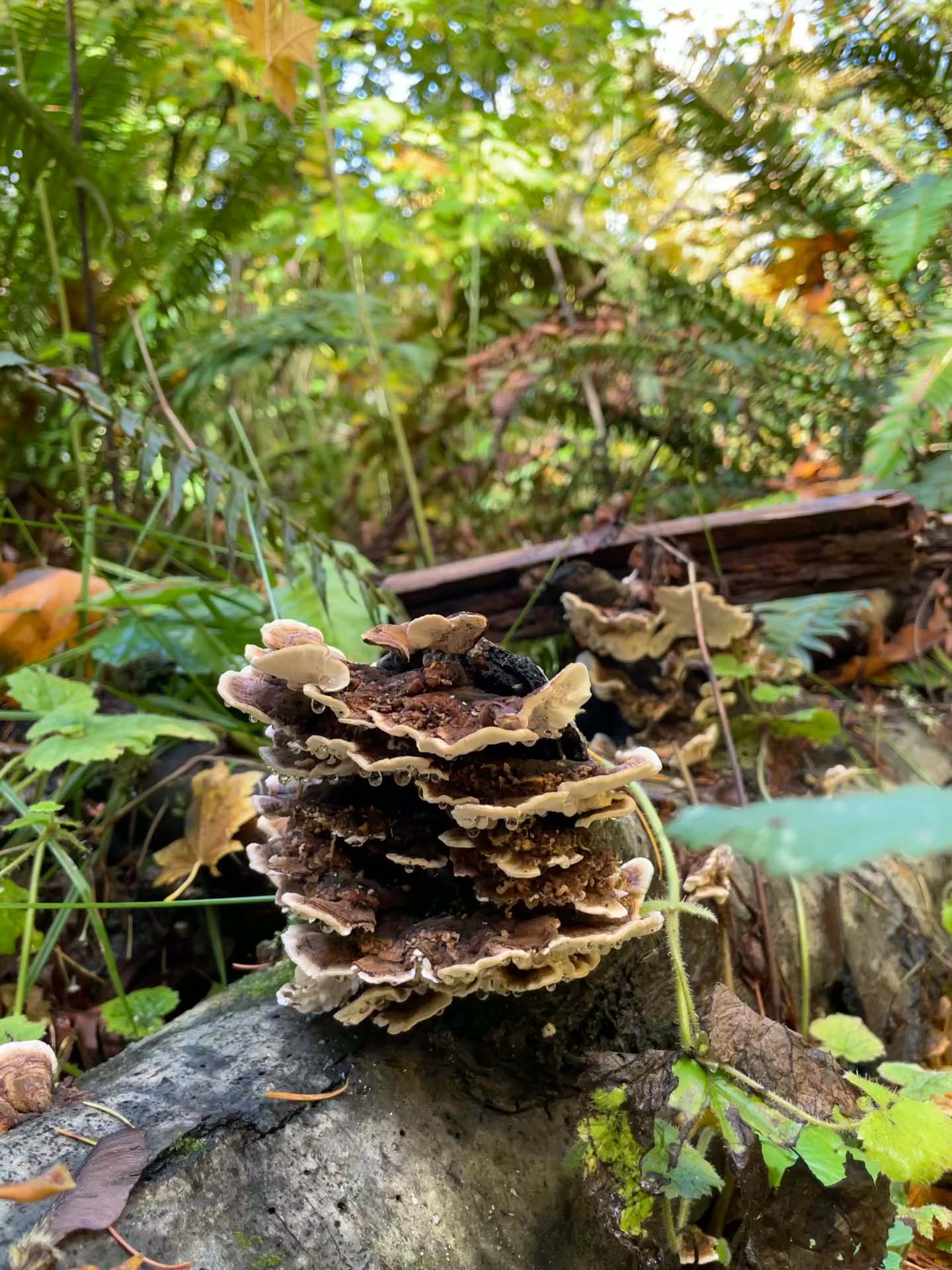 I am really not sure of the identity of the mushrooms in the next four photos, although “sex toys” come to mind for the first two.  These may be “Wine Slimecaps” but the caps don’t match the guide. The other possibility is “Matte Stickycaps”  which the guide says “grow under Douglas Firs”.  In this case, they are growing on one.  The caps match the texture of the caps in the photo, but the guide says they can be up to 51/2″ wide.  None of these came close. 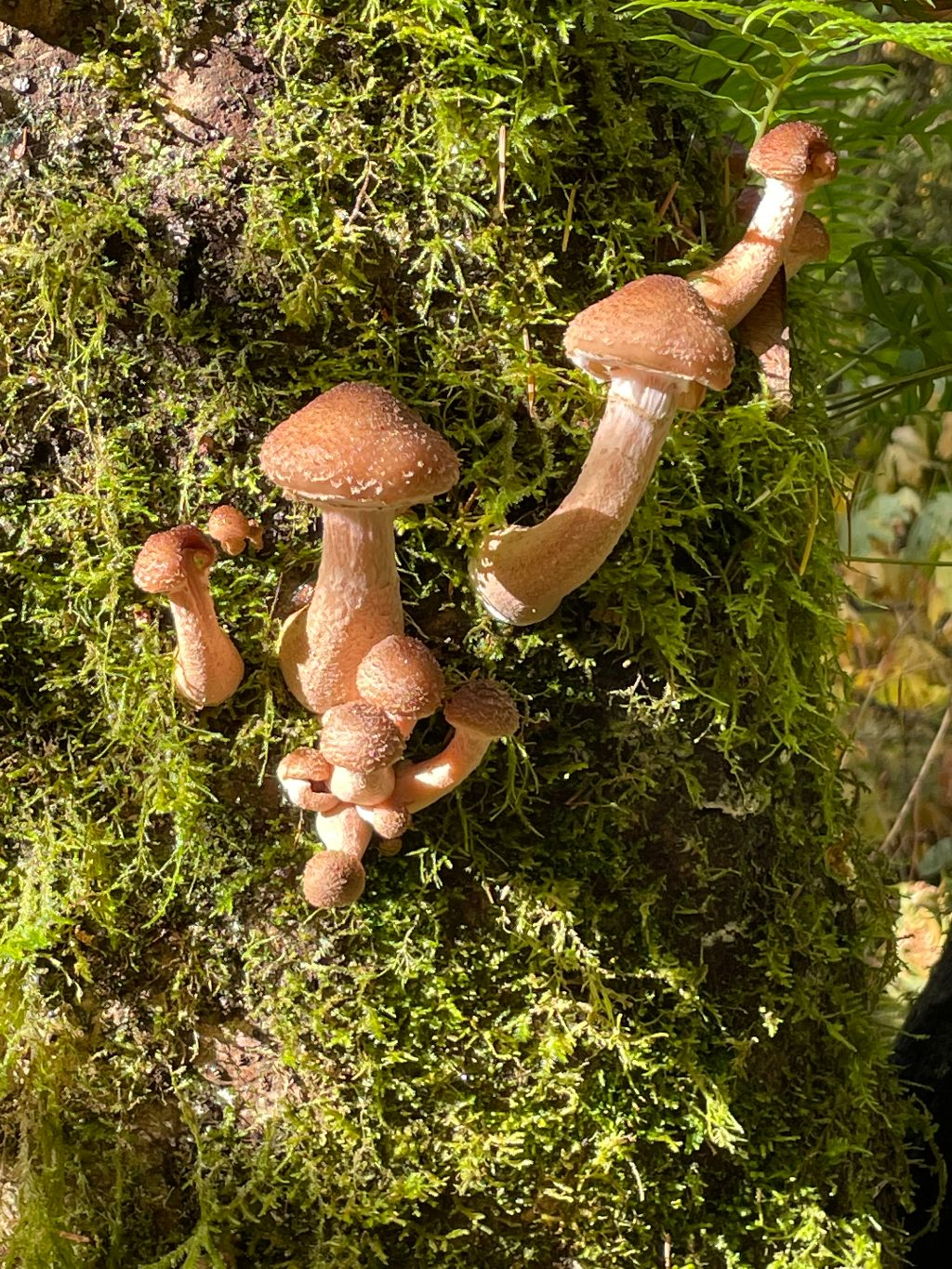 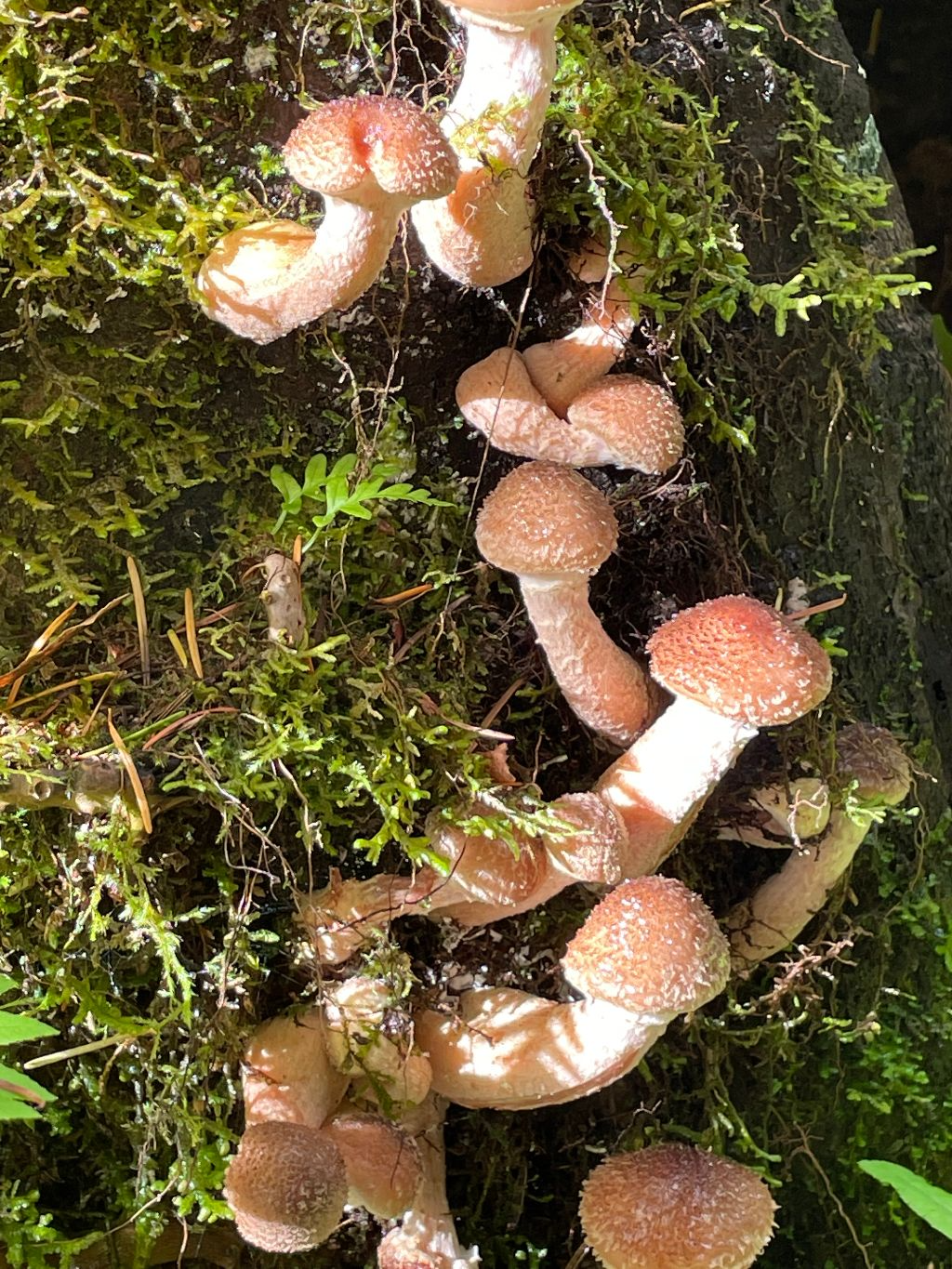 This photo caused some delay in getting these to you.  I tried to magnify it but the result was always a bit out of focus.  Tough call on these.  Possibly “Fairy-ring  Mushroom” (which grows in grass” – but not here), or perhaps “Mower’s Mottlegill”, but the guide says they “grow in grassy areas like lawns”.   Does moss count? 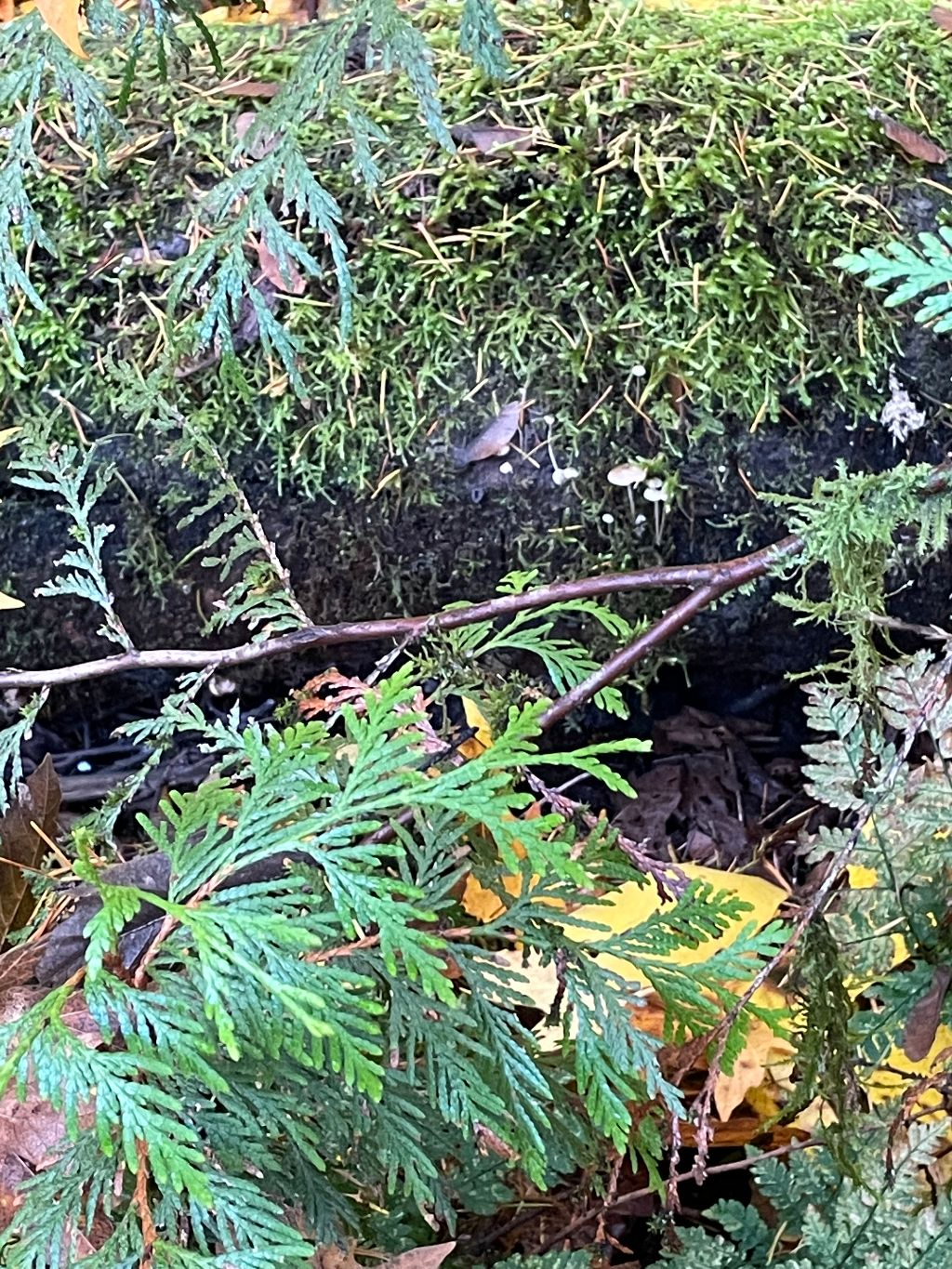 I think this is a “Woodland Lepidella” although the texture of the cap doesn’t quite match.  The guide says it grows “on soil in conifer forests, clearings, and roadsides”, which was the case here. 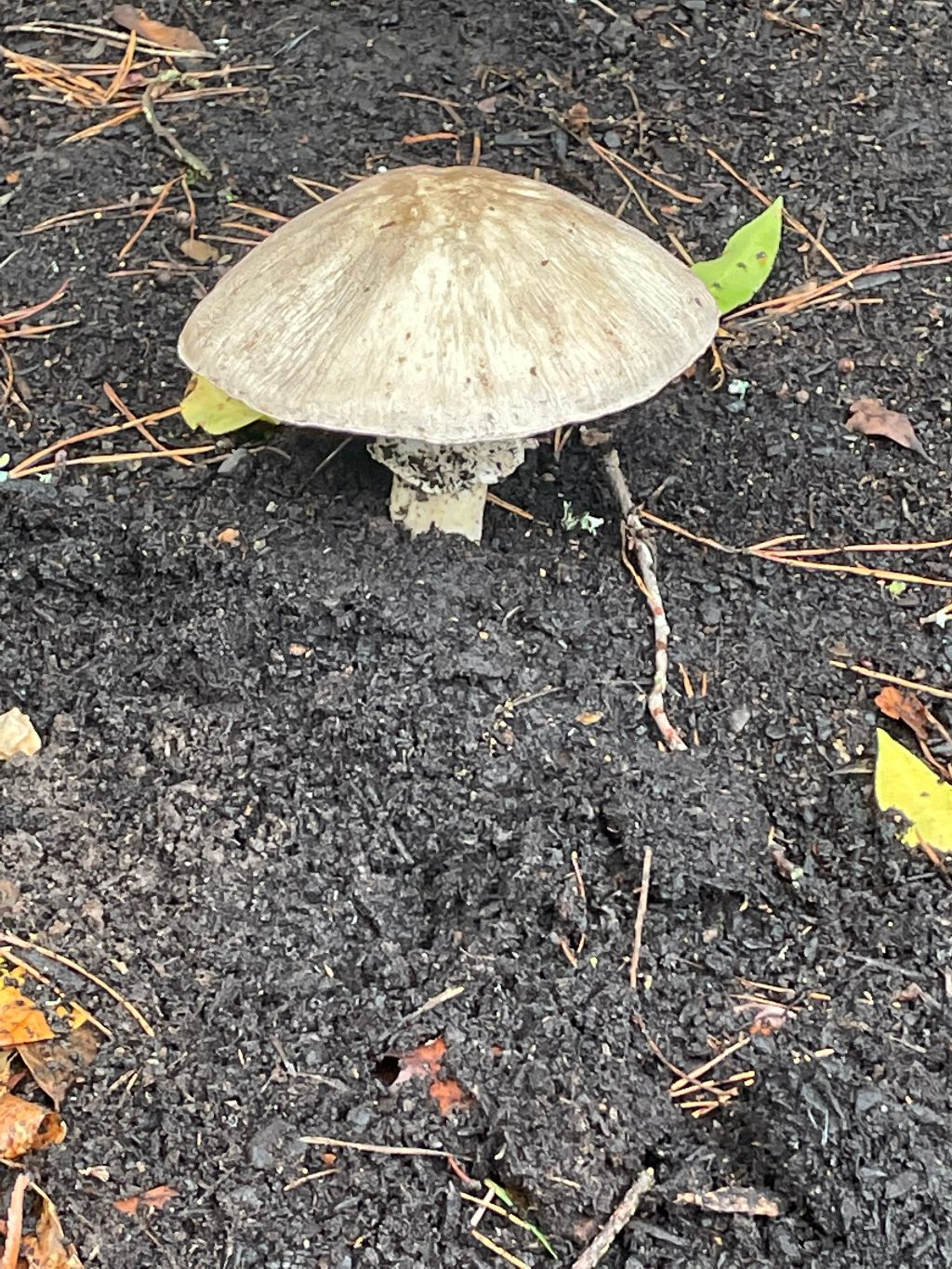