Every day I get six or seven links from readers about the infestation of society by performative brands of DEI (i.e., “wokeness”). The links are often distressing and depressing, but I have to tell readers “I’m sorry, but I can’t write about everything!”

But when I am compelled by the laws of physics to write about something is when people try to bend biology to fit their ideological narrative. The most egregious example of this is the claim that there is no such thing as a sexual binary in humans and other animals, which is just wrong. Males have small mobile gametes (that’s the definition), and females big and immobile ones. Just like my Drosophila, about 99.99% of humans are either male or female by this definition. Hermaphrodites or other intermediates are not “other sexes”; they are developmental anomalies. (That’s not a slur on human intermediates; it’s a statement that you get the very rare intermediates only when development slips off the rails that have evolved to ensure a sexual binary.)

These attempts to refer to nature as a way of validating human behavior, morality, or ideology is, of course, an example of the “naturalistic fallacy,” usually described as the fallacy of saying “what’s seen in nature is good in humans.” And it’s a dumb fallacy, because a lot of animals behave in nature in ways that we would consider immoral in our own species. (Chimps, for example, attack other bands of chimps and rip individuals apart while they’re still alive. Some spider females kill and eat males after mating.) We can’t look to nature for morality, because, at bottom, nature is amoral, for animals don’t have the capacity to argue and make considered judgments about how to behave. Often “considerate” behavior towards others is the evolutionary product of reciprocal altruism or kin selection.

So when the Sussex Wildlife Trust tries to use the pregnancy of male seahorses as a justification for “queerness”, as they do below, they’re committing the naturalistic fallacy. The reason we shouldn’t discriminate against non-cis people is because discrimination is wrong and hurtful, not because male seahorses (and, by the way, male pipefish and sea dragons, contra the tweet below) get pregnant. Mallard drakes sometimes kill females during forced copulation, which in humans is the equivalent of rape. Does that make rape okay? You get my point.

Here’s the tweet. The original has been deleted (I wonder why?) but here’s a screenshot of the original:

Part of theme of inclusion this week & #QueerEcology – the incredible seahorse species has the only true, reversed pregnancy. Males get pregnant & give birth. This is the Short Snouted Seahorse found in Sussex 🌈#ThursdayThoughts 📷 Paul Naylor pic.twitter.com/igdm5ef2wo

Now a bit of biology before we go on to the associated article.  Seahorses have a fascinating mating and breeding system. They’ve evolved so that the males largely take care of the eggs. (In many species, males do at least half the tending and rearing). In seahorses, pipefish, and sea dragons, this occurs by males sequestering the eggs in their kangeroo-like pouches, fertilizing them there, and sequestering them until hatching.  (This may be a way to increase offspring number by favoring those individuals who protect their reproductive investment by protecting fertilized eggs.)

The important thing is that, in seahorses, sea dragons, and pipefish, the females produce eggs faster than the males can put them in their pouches, so females are always looking around for an “empty” male. Because—unlike in most animals—females are thus competing for males’ attention, and sexual selection is reversed. It’s the opposite of what happens in most other species, in which males compete to fertilize females. This is why, if there is sexual dimorphism in seahorses, it’s the females who are more elaborately decorated and with more secondary sexual characteristics. (See also here.)

Note that the males, while they take care of fertilized eggs and in that sense are pregnant, are still males, as they produce sperm rather than eggs. So you could say that “males get pregnant”, but that’s not the same thing as transsexual men who can sometimes get pregnant, nor does seahorse pregnancy somehow show that transmale pregnancy is “okay” or “moral”. It IS perfectly okay, but not because you find it in some marine species.

I like to show students the video below of a male seahorse giving birth, which looks almost as laborious and painful as labor in human females. This form of reproduction, given the female’s rapid rate of producing eggs, may have evolved to protect eggs and embryos from predation. We just don’t know.

What we do know is that males have a form of pregnancy, but this says nothing one way or the other about transsexual pregnancy in humans. The pregnant seahorses are neither queer nor transsexual, but males, and there’s no morality in the fishes (yes, seahorses, sea dragons, and pipefish are “fish”).

I wouldn’t have written all this if reader Al, who was steamed, sent me this associated link from the Sussex Wildlife Trust news (click on screenshot to read).  Now I’m not going to go after this very hard, as I want to just reiterate the naturalistic fallacy and how it’s used as a justification or valorization of human behavior. And yes, pregnant seahorses do show that animal behavior is diverse and unexpected.  But pregnant male seahorses remain males, and they’re not “queer,” either, as the author seems to imply in her piece.

But the seahorses are used to somehow buttress the insecurity of a woman trying to come out as queer. 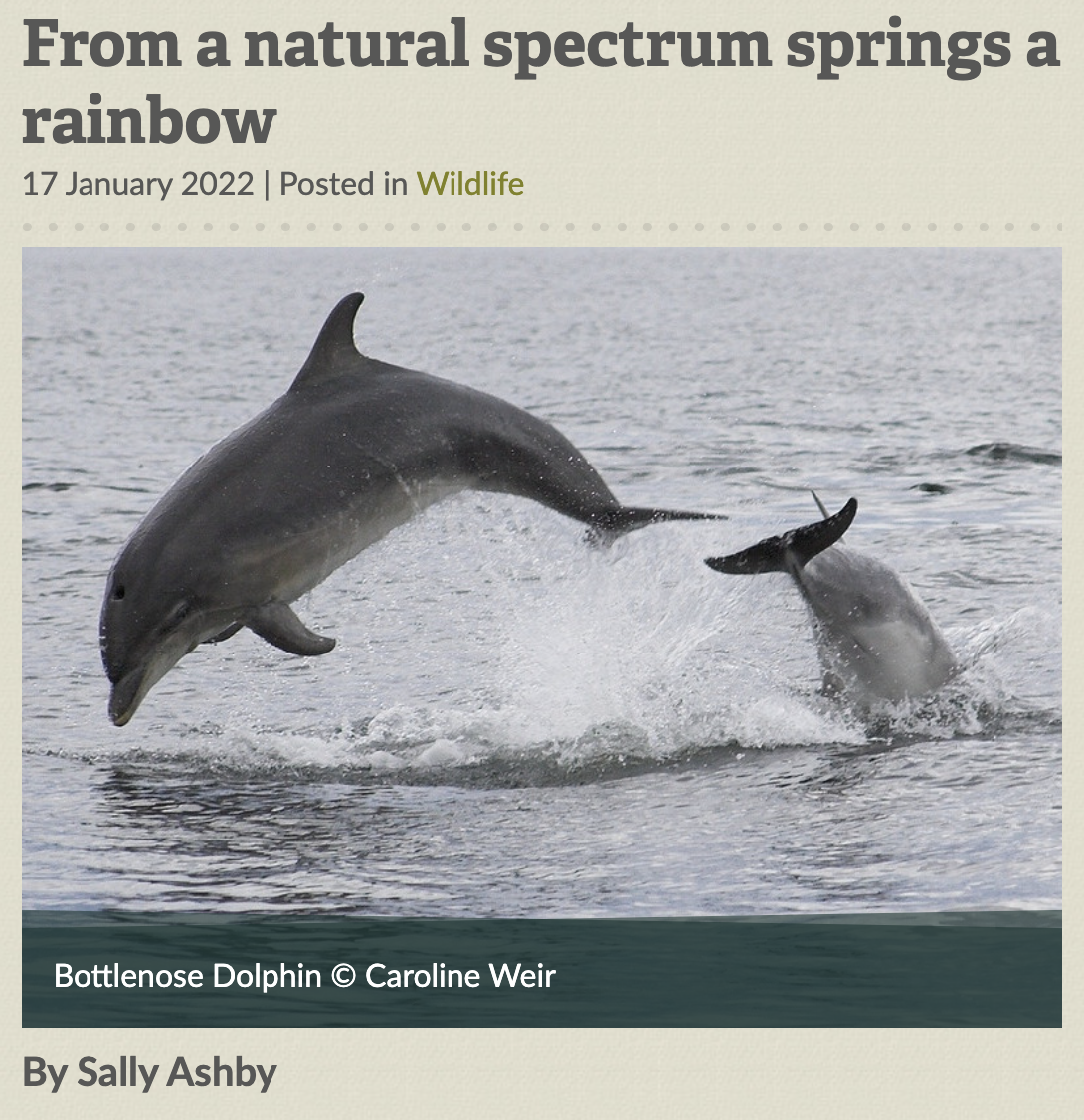 As a keen zoology undergraduate who adored, almost worshipped, Darwin’s theory of evolution, I couldn’t quite come to terms with his theory of sexual selection. It really didn’t add up as I was tentatively stepping out of the queer closet back in 1996. I lived and breathed evolutionary theory but where did I fit in? A deviation? An anomaly? A kink in the genetic spiral of life? So, of course, I started studying the evolution of sex and soon discovered how incredibly diverse and fascinating the plant and animal kingdoms (more like queendoms or even queerdoms) really are in terms of gender and sexuality.

. . . .In the plant world too there is a whole host of queerness to explore. In fact bisexual flowers are described as “perfect”, having both male and female reproductive structures. Examples include roses and lilies but also the horse chestnut, highlighted in a wonderful project by the Queer Botany Society at the Walthamstow Marshes SSSI.

Now, with my work for the Sussex Kelp Restoration Project much of my favourite flagship “queer” marine species are linked directly to our conservation work here on the Sussex Coast. For example bottlenose dolphins who are known to engage in homosexual behaviour and sex for fun, again thought to increase social bonding and cooperation. The black seabream which are all born female and change to male at maturity (known as protogynous hermaphrodites). And finally the incredible seahorse species that in my opinion can claim the throne of the animal drag-kingdom in having the only true reversed pregnancy.

I’m sure Darwin would agree that rather than it all being about nature versus nurture we should focus more on nurturing our true nature, that part of us that is wild and free and far from binary. Wouldn’t it be dull if everything were so very black and white… life and love is in fact gloriously technicolour thanks to evolution’s rainbow.

Now people can find solace where they will, but I think it’s misguided to look to nature to validate a behavior in humans. For every mammalian species that shows homosexual behavior, there are a dozen who don’t.  (Do those show that homosexuality is “unnatural, ergo wrong?” Of course not!) And homosexuality in humans, which often involves attraction solely to members of your own sex, is not at all the same thing as homosexual behavior in dolphins. For when a the male wants offspring, he knows where to go. Should a rapist find validation by studying ducks?

The last sentence of the piece above, referring to “evolution’s rainbow,” is likely a reference to Joan Roughgarden’s Evolution’s Rainbow, a book-length attempt to justify human non-cis-ness by looking at animals (Roughgarden is a transsexual woman). I reviewed it for the Times Literary Supplement in 2004. My review is no longer online but I have a copy and will send it to those who want to read it. Here’s the last part of my review (it was mixed: I found Roughgarden’s descriptions of behavior being very good but her moral “lessons” untenable). Yet the warning about the naturalistic fallacy is apparently is as relevant today as it was when I wrote this 18 years ago:

But regardless of the truth of Darwin’s theory, should we consult nature to determine which of our behaviours are to be considered normal or moral? Homosexuality may indeed occur in species other than our own, but so do infanticide, robbery and extra-pair copulation.  If the gay cause is somehow boosted by parallels from nature, then so are the causes of child-killers, thieves and adulterers. And given the cultural milieu in which human sexuality and gender are expressed, how closely can we compare ourselves to other species? In what sense does a fish who changes sex resemble a transgendered person? The fish presumably experiences neither distressing feelings about inhabiting the wrong body, nor ostracism by other fish. In some baboons, the only males who show homosexual behaviour are those denied access to females by more dominant males. How can this possibly be equated to human homosexuality?

The step from “natural” to “ethical” is even riskier. As the philosopher G. E. Moore argued, identifying what is good or right by using any natural property is committing the “naturalistic fallacy”: there is no valid way to deduce “ought” from “is”. If no animals showed homosexual behaviour, would discrimination against gay humans be more justified? Certainly not. Roughgarden’s philosophical strategy is as problematic as her biological one.

Roughgarden believes that evolutionary biologists, with their enthusiasm for the “classical” gender roles of the neo-Darwinian theory of sexual selection, are partly responsible for society’s unease with gay and transgendered people. She is wrong. This theory is powerful and largely correct. Yes, there are nuances of behaviour that require special explanation, or that we don’t yet understand. But nobody, least of all Darwin, ever claimed that evolutionary biology is characterized by ironclad laws. Our field is not physics. Nevertheless, some generalizations, such as the pervasive competition of males for females, can be powerful and useful.

Yet in the end, all of this is irrelevant to the gay and transgendered community’s genuine concerns about repressive social attitudes. Rather than wringing her hands about the theories embraced by her biological colleagues, Joan Roughgarden might consider visiting a school board meeting deep in the American Bible Belt. There, ironically, she would find where opposition to a sexually diverse society really thrives, as does opposition to the very theory she is partly lambasting, Darwinism. It is not the intellectuals who are the problem; it’s the anti-intellectuals.

59 thoughts on “Do seahorses validate “queerness”? The naturalistic fallacy committed by the Sussex Wildlife Trust”