Today’s trifecta begins with a video of cats in tubes. The videomaker has this on YouTube:

Today, I set up some tubes of different sizes for my cats to play with! How many of them could pass the final tube?

Conclusion: 16 cm is the limit for even mesomorphic housecats. But a floof makes it through. Conclusion #2: a cat in a tube prefers to go backward rather than forward.

This great story from The Washington Post was sent to me by at least a half-dozen reader. (Note: do not refrain from sending me news items because you think others have already sent them. This is often not the case!)

Click on the screenshot to read; excerpts are indented.  This is to my knowledge the first time that cats have held a kitchen appliance hostage.

On Black Friday, Jessica and Nikii Gerson-Neeves bought a blender. It was a Vitamix blender, a professional-grade splurge, and the couple was looking forward to a winter of smoothies and soups.

It arrived on Dec. 16 at their home on Vancouver Island in British Columbia. Jessica put the hefty box down on the floor in the kitchen, just for a second. Her 4-year-old tuxedo cat, Max, otherwise known as the “sentient soccer ball,” jumped up on the box. Jessica thought it was funny and snapped a photo.

That was more than three weeks ago. Since then, the cats have refused to leave the box, fighting over who gets to perch upon it and taking turns standing guard while the others eat or are busy elsewhere. The blender remains ensconced inside. 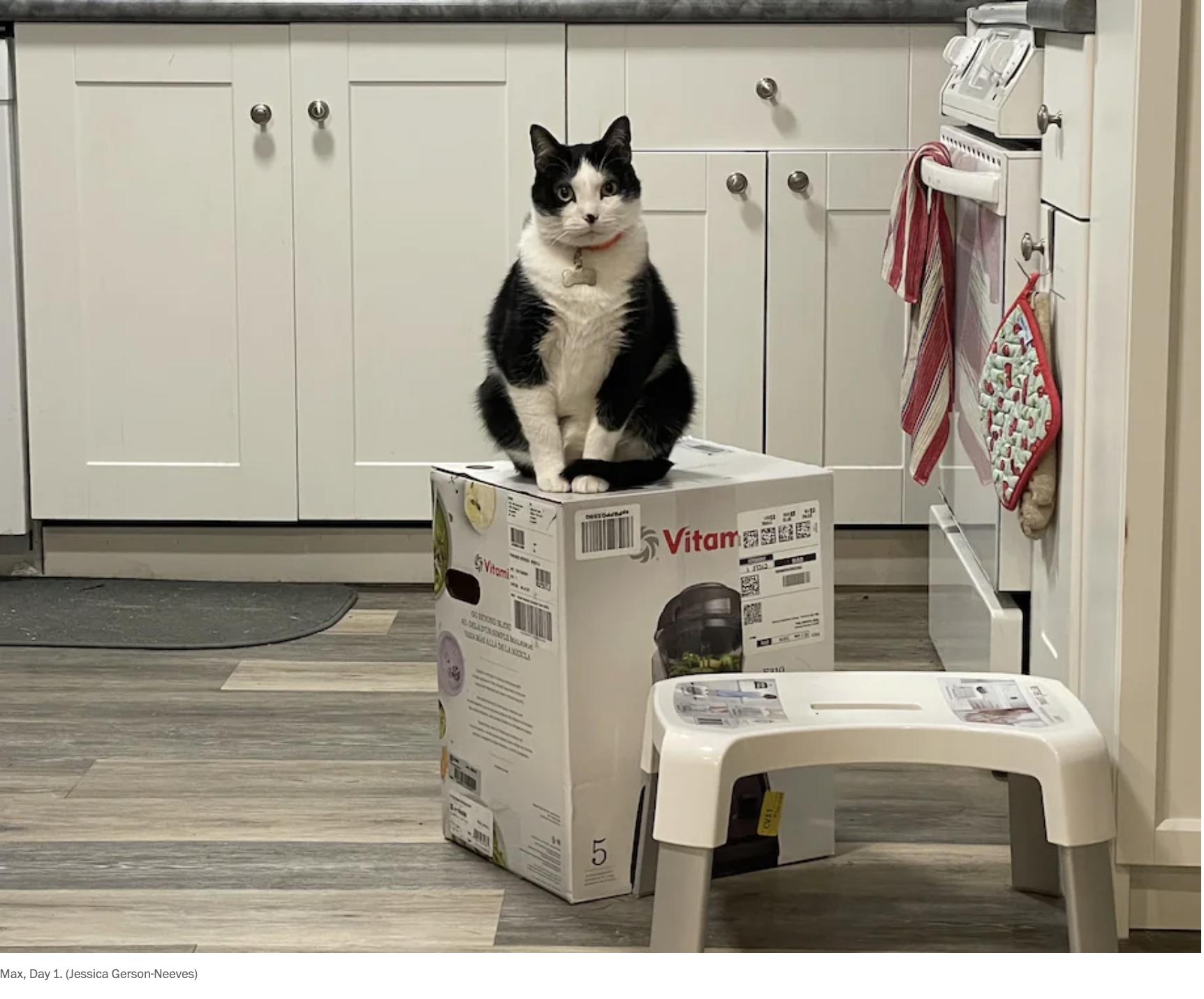 The Gerson-Neeveses, who refer to themselves as “the middle-aged lesbians,” documented the standoff, taking photos and posting daily updates on Facebook, specifically in the 900,000-plus-member group “THIS CAT IS C H O N K Y.” The hostage situation has drawn thousands of comments from those who know the “but the cat was on it!” explanation all too well.

“STANDOFF: Day (are you KIDDING me) 4: The situation has come full circle as the sentient soccer ball took advantage of a moment of distraction by the sentient potato and reclaimed the Vitamix, immediately adopting a posture suggesting that he came to eat treats and bitchslap any lesbians who try to come for the Vitamix, and he’s all out of treats,” wrote Jessica, a psychologist and the writer of most of the updates. “One of the middle-aged lesbians appears to have locked herself in the bathroom; the other was heard in fervent prayer to the patron saint of all queer cat lovers, [Freddie] Mercury. ”

The couple, who married in 2016, are accustomed to seeing their cats jump on boxes and sit on piles of things. The animals usually lose interest after a day or two at most. Not this time.

Treats, decoy boxes and toys have been used, all for naught. The Gerson-Neeveses moved the box to a less-central area of the kitchen, hoping the change in geography would end the stalemate. But a cat remained on the box, on guard at all times. Jessica got up in the middle of the night to try to claim the box. Occupied.

“There is just something about the Vitamix box that just has really held their attention,” Jessica said. “At this point, it’s turned into something so much bigger than us.”

Bolding here is mine:

People frequently ask why the couple doesn’t just take the cats off the box. These are clearly dog owners. This is not how cats work. 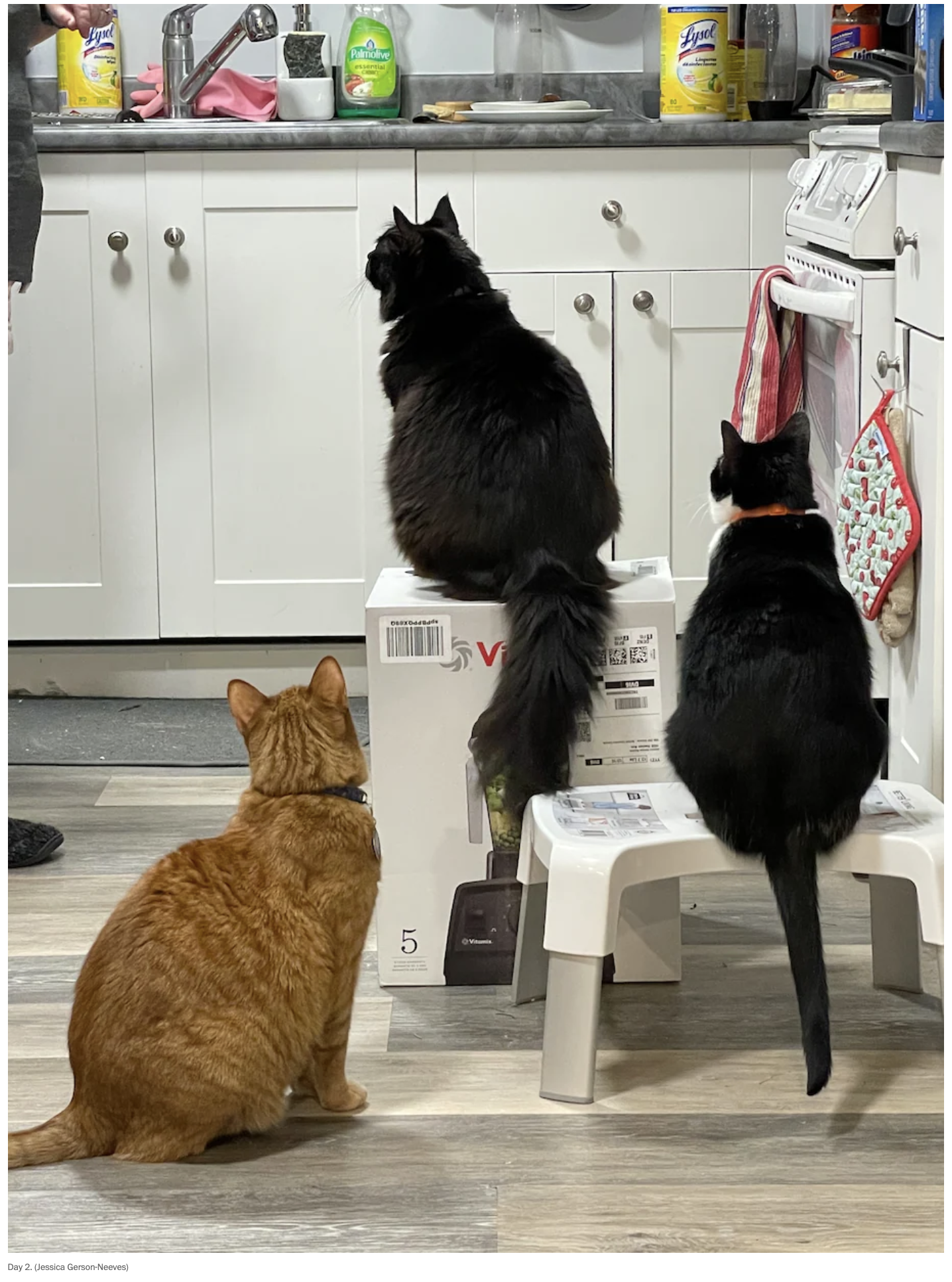 They hoped that while they were away over Christmas that the cats would lose interest. The Gerson-Neeveses came home, put their bags on the floor and — nope. The Vitamix had not been abandoned. At one point, they coaxed Max into jumping onto a second box, but as soon as he leaped off, Lando jumped on. Max was not happy and quickly reclaimed the spotlight. The couple gave up on smoothies and started eating homemade ice cream.

On Jan. 2, the couple reached out to Vitamix on a public Facebook post, asking for three empty boxes that might fool the cats into relinquishing the appliance. The company immediately obliged, but between snowstorms and customs, the empty boxes have yet to arrive — and Nikii and Jessica aren’t quite sure how the boxes will fit in their small apartment, much less if they will satisfy the cats.

Hokule, a surfing cat in Hawaii!  The YouTube notes give other information:

You can keep up with Hokule’a and all of his surfing adventures on Instagram, hokuleathesurfingcat: https://thedo.do/hokulea.

Lagniappe: Kittens climb for their supper!