Today we have a rarity: photos of social insects. Our contributor is Christopher Starr, a retired Professor of Entomology at the University of the West Indies in Trinidad & Tobago.  His captions are indented, and you can enlarge his photos by clicking on them.

Apoica flavissimais is a member of a small genus of neotropical wasps distinguished by being nocturnal.  During the day they are almost always to be found resting on the nest in this formation.  Brazil. 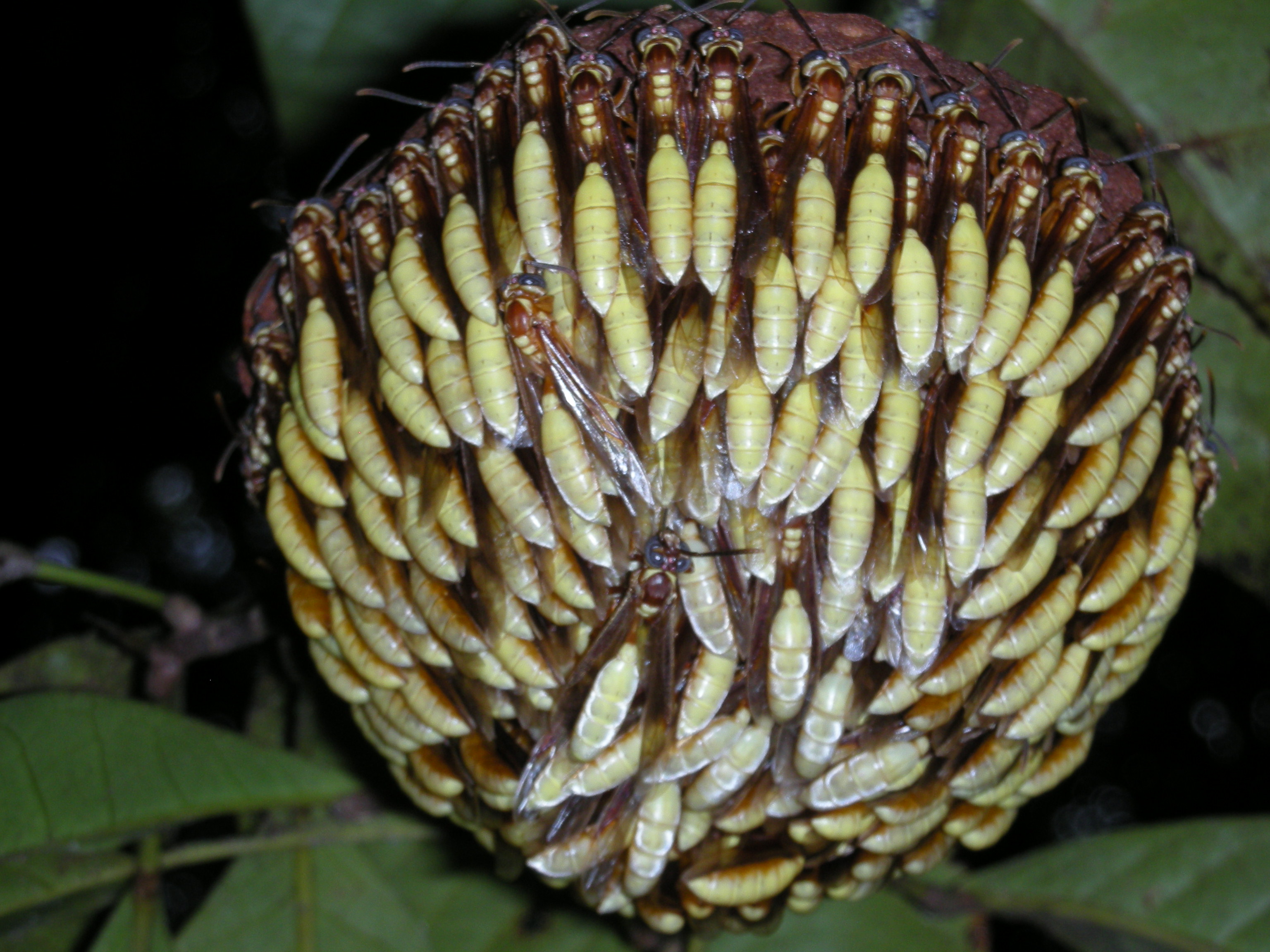 The neotropical Angiopolybia pallensis is the commonest social wasp in some parts of its broad range.  Although it shows high alertness when approached and has a moderately painful sting, it is surprisingly slow to fly off the nest and attack.  Trinidad. 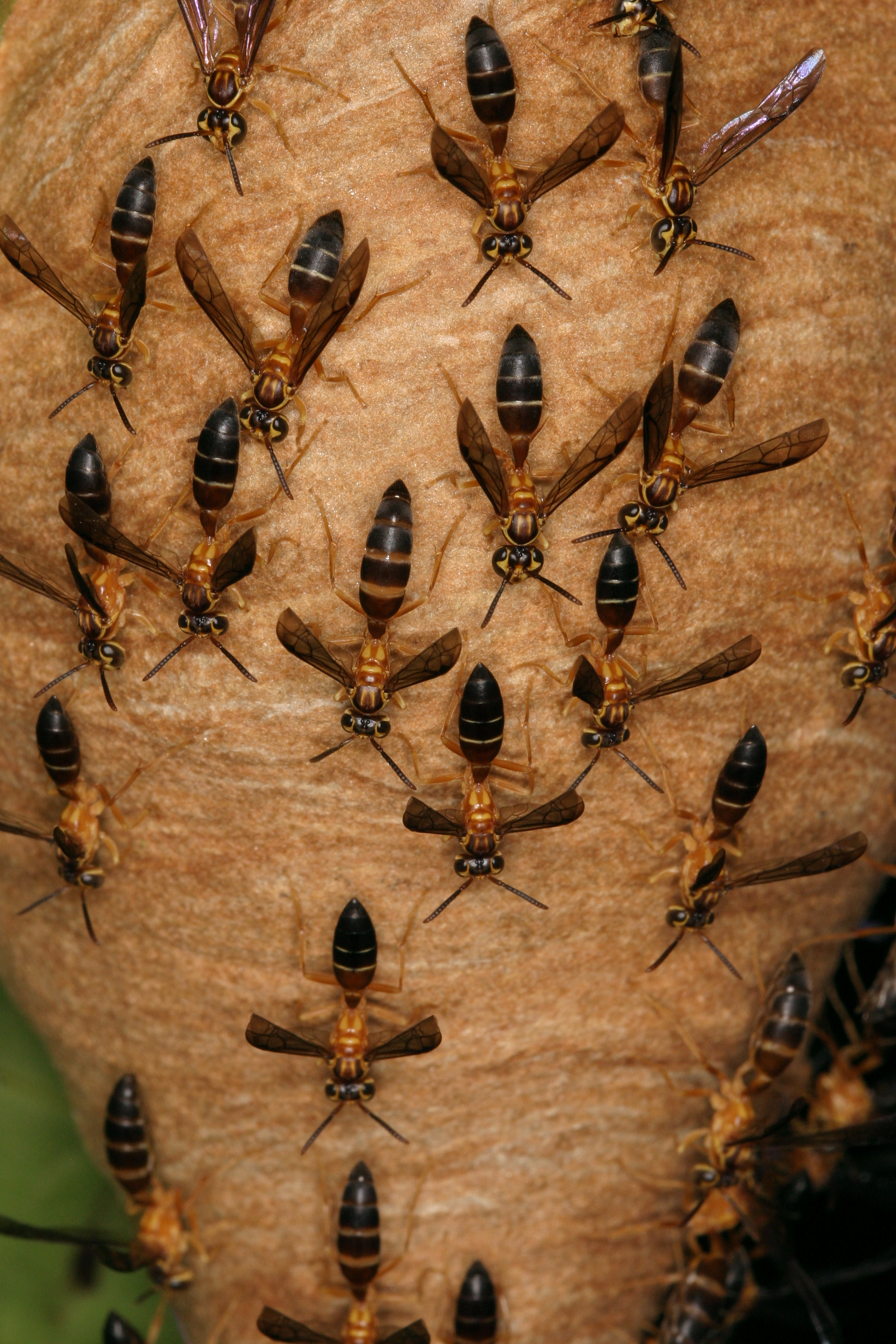 Members of the genus Miscyocyttarus show a great diversity of nest structure. An extreme nest form is seen in M. punctatus, in which each cell is based on the lip of the previous cell.  This is expensive in building material, but it presumably allows the wasps to camouflage the nest as a vine against visually-searching predators.  Trinidad. 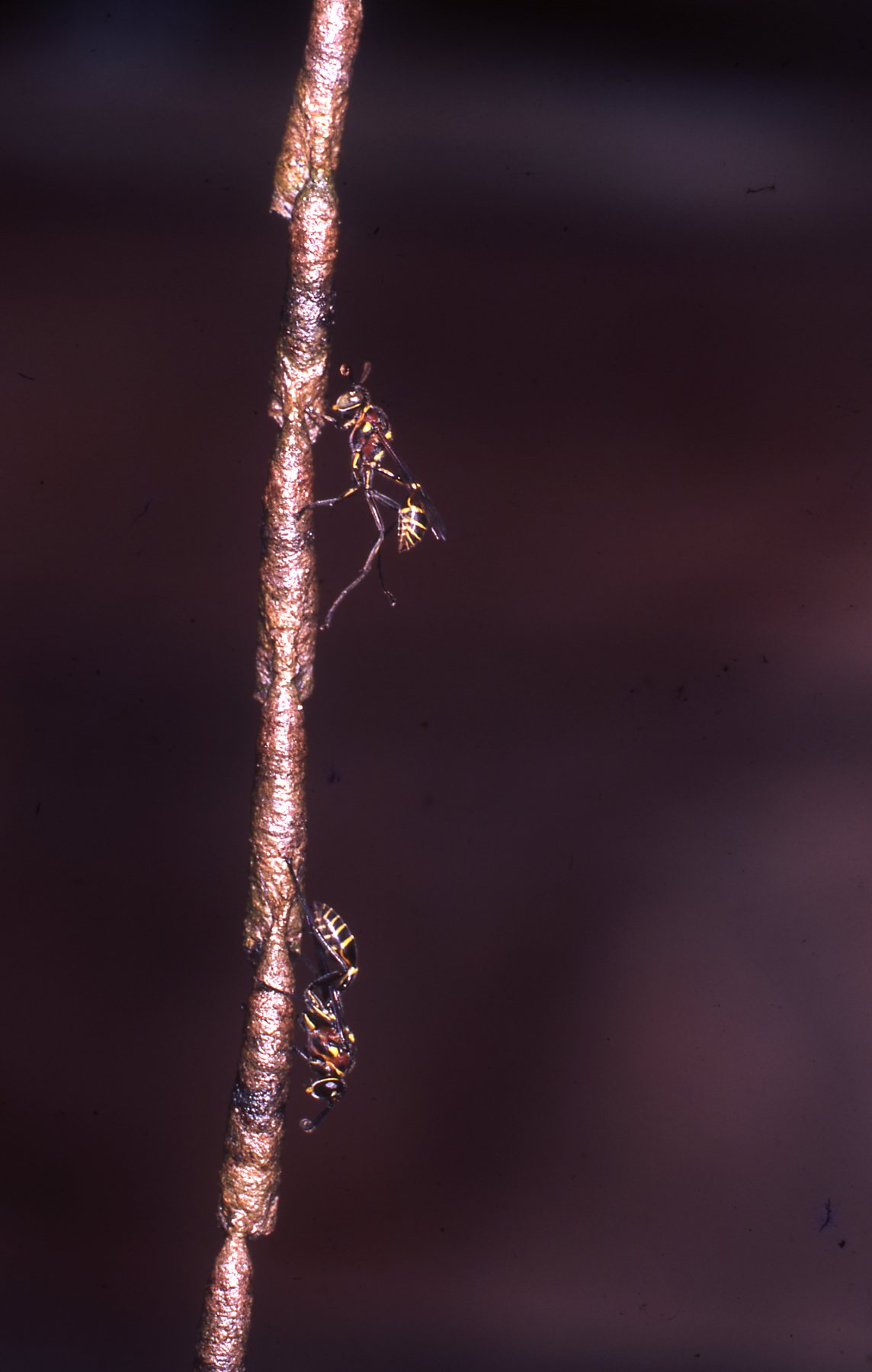 Parachartergus colobopterusis notoriously docile and can only with difficulty be provoked to a stinging attack.  Note that I have broken off the stick on which this nest is based and am holding it in my hand.  It’s sting is ostensibly quite mild.  Venezuela. 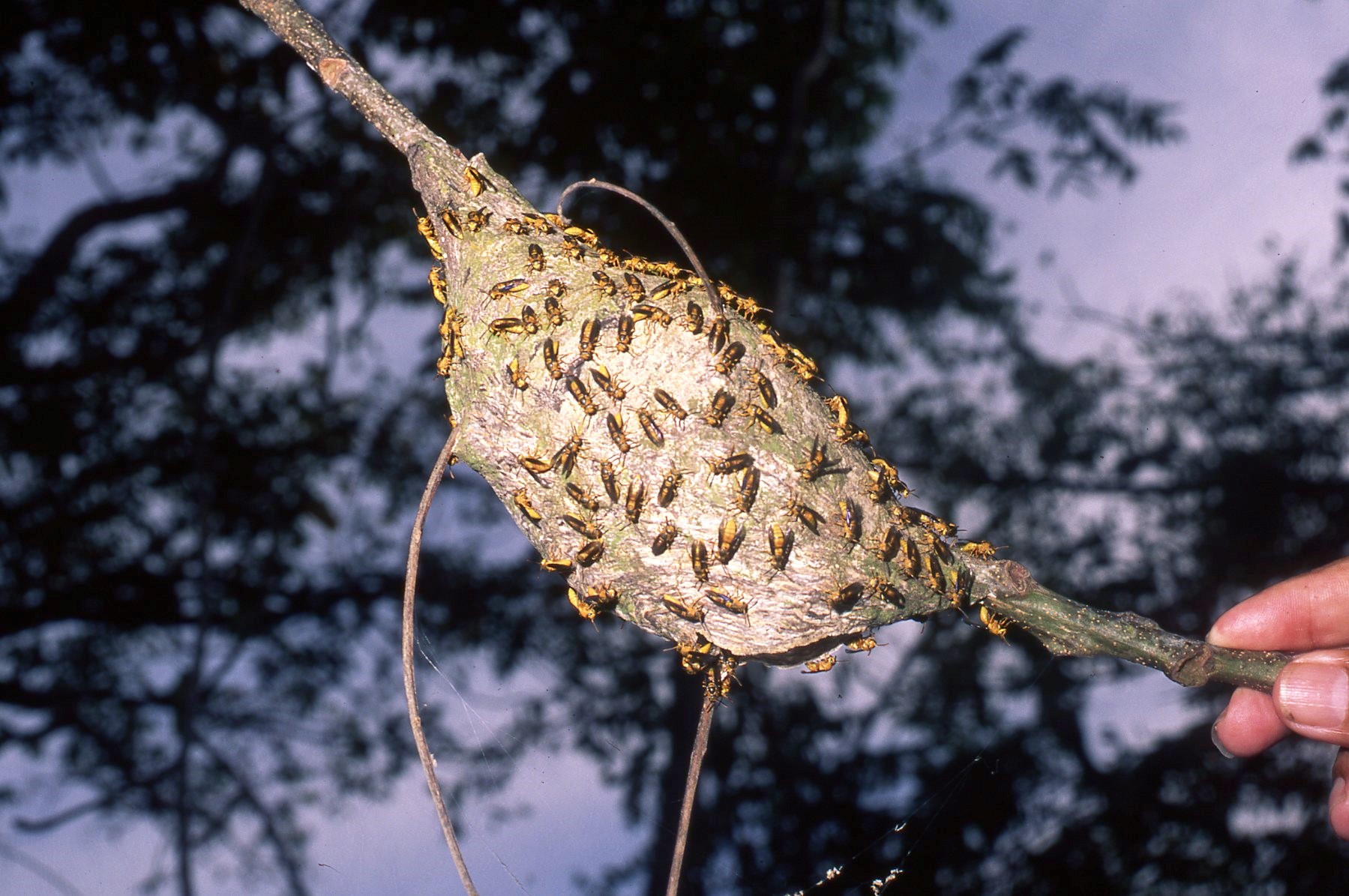 No one has yet found a physical character to distinguish the sympatric Mischocyttarus alfkeni and M. baconi, yet they are easily separated by their nests, a good example of ethospecies.  The use of genetic characters confirms that they are two different species.  Trinidad. 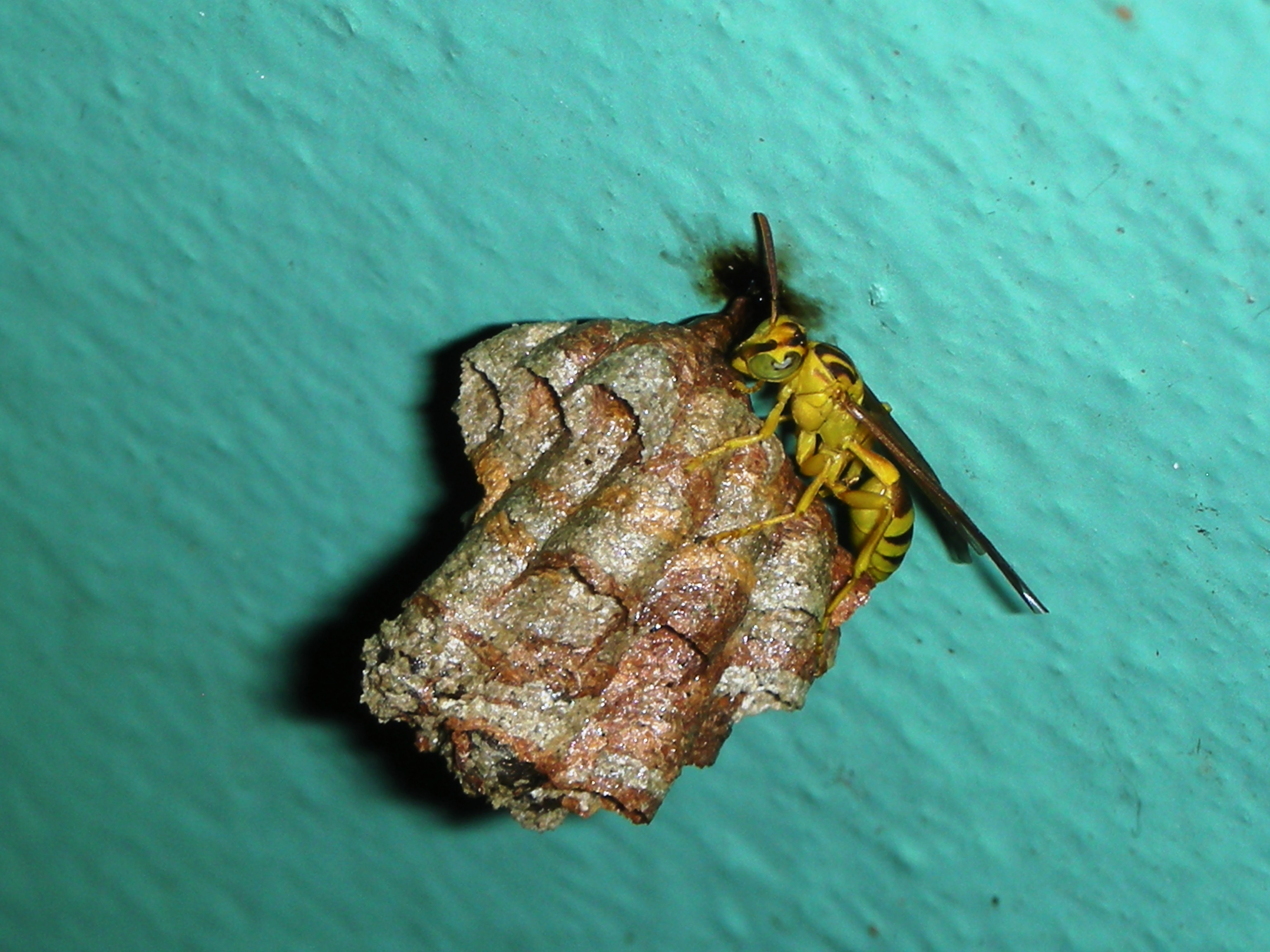 Parachartergus fraternus makes a very fine-textured nest from plant hairs.  When a colony absconds the workers commonly return to the old nest over several days to salvage the valuable carton from the nest envelope.  In contrast to P. colobopterus, this wasp readily attacks when disturbed and delivers a painful sting.  Trinidad. 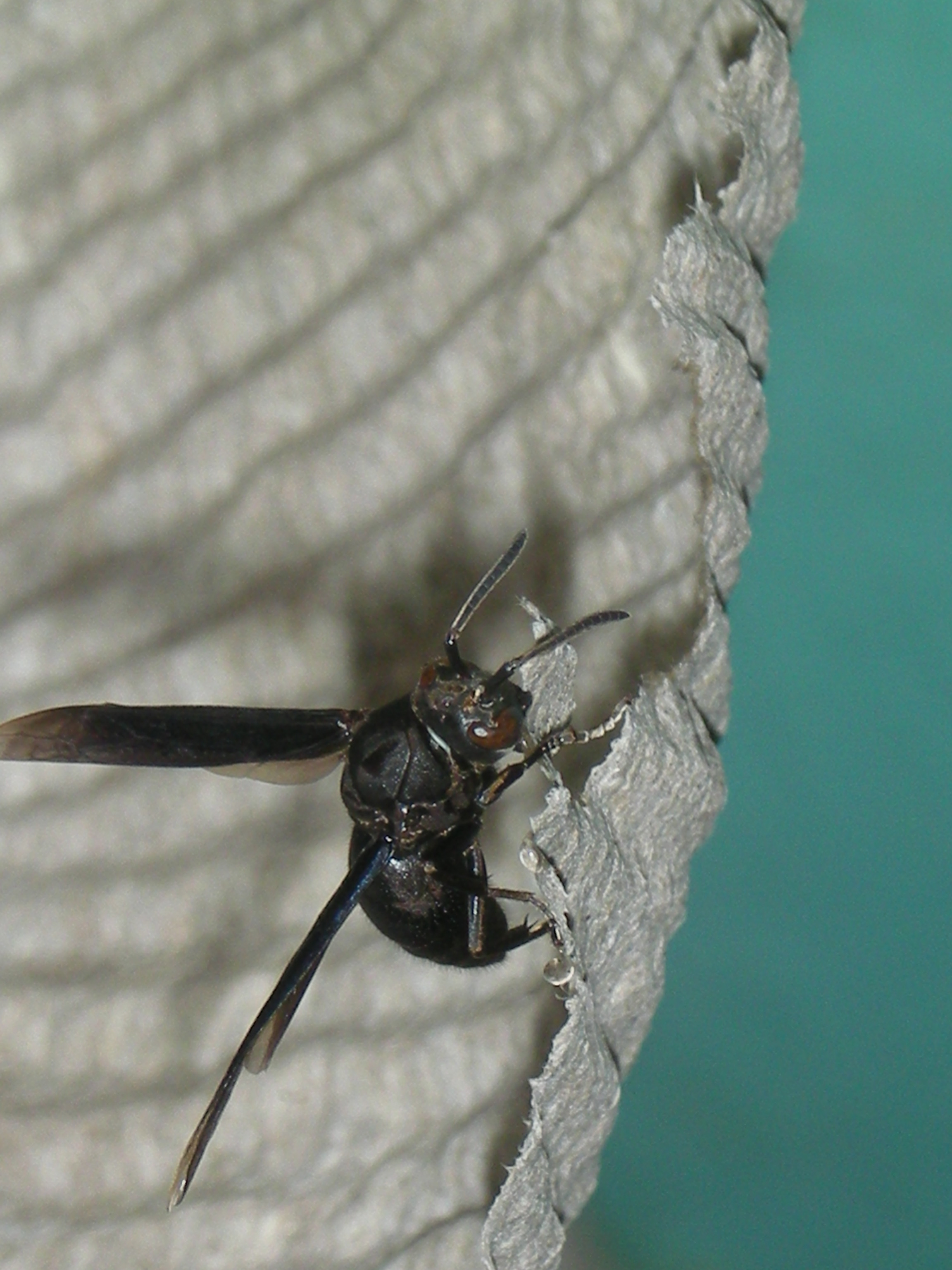 All studied Polistes spp. display a stereotyped set of visual threats when the colony is disturbed.  This Polistes exclamans has the forelegs raised and vibrating side to side, the wings raised and fluttering at low amplitude, and the abdomen bent and probing in a stinging motion.  Georgia. 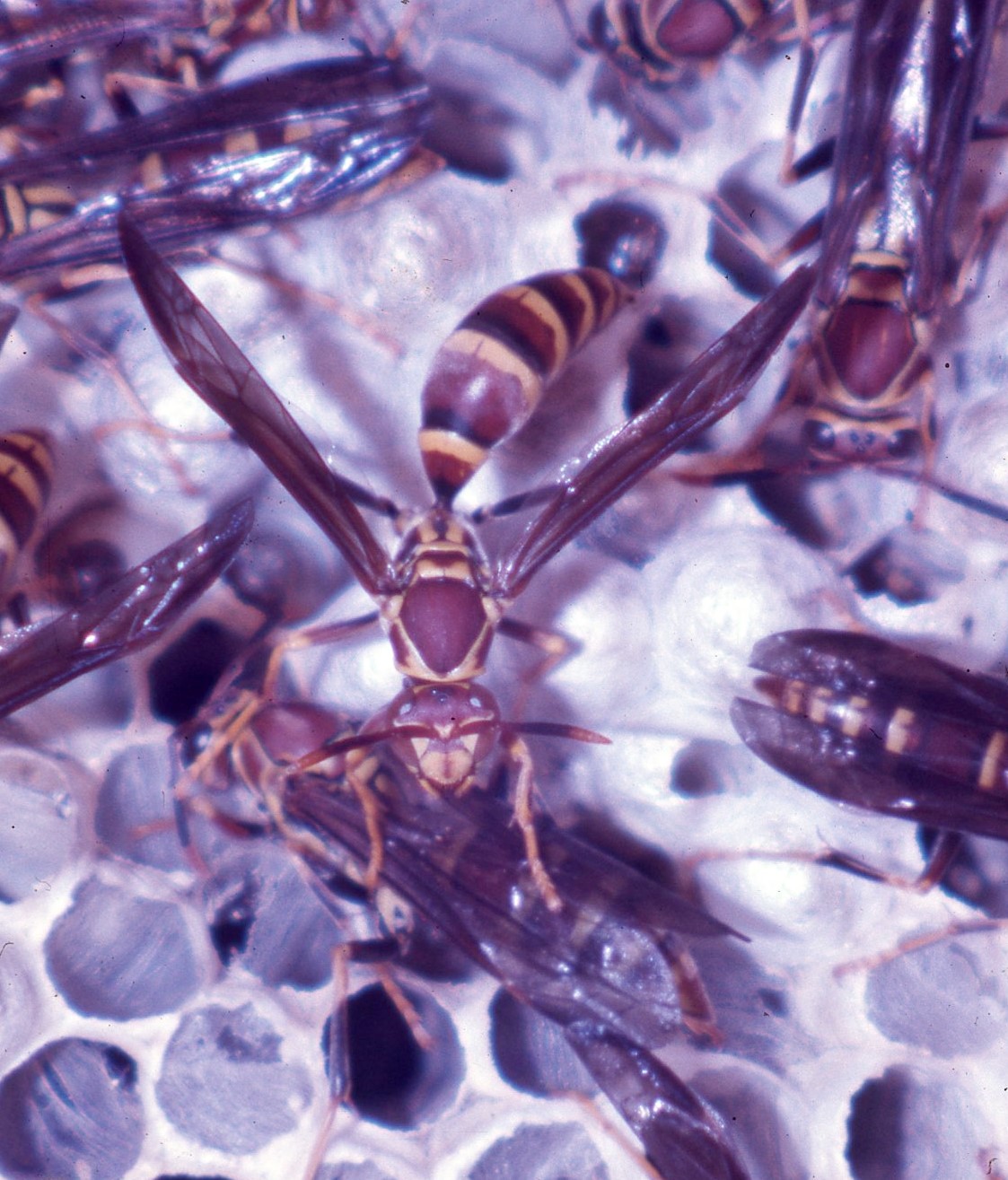 Social wasps forage readily for water.  This P. dominula has landed on the surface of a stagnant pond and is drinking from it.  The abundance of algae in the water presumably aids her in standing on the surface without sinking.  Italy. 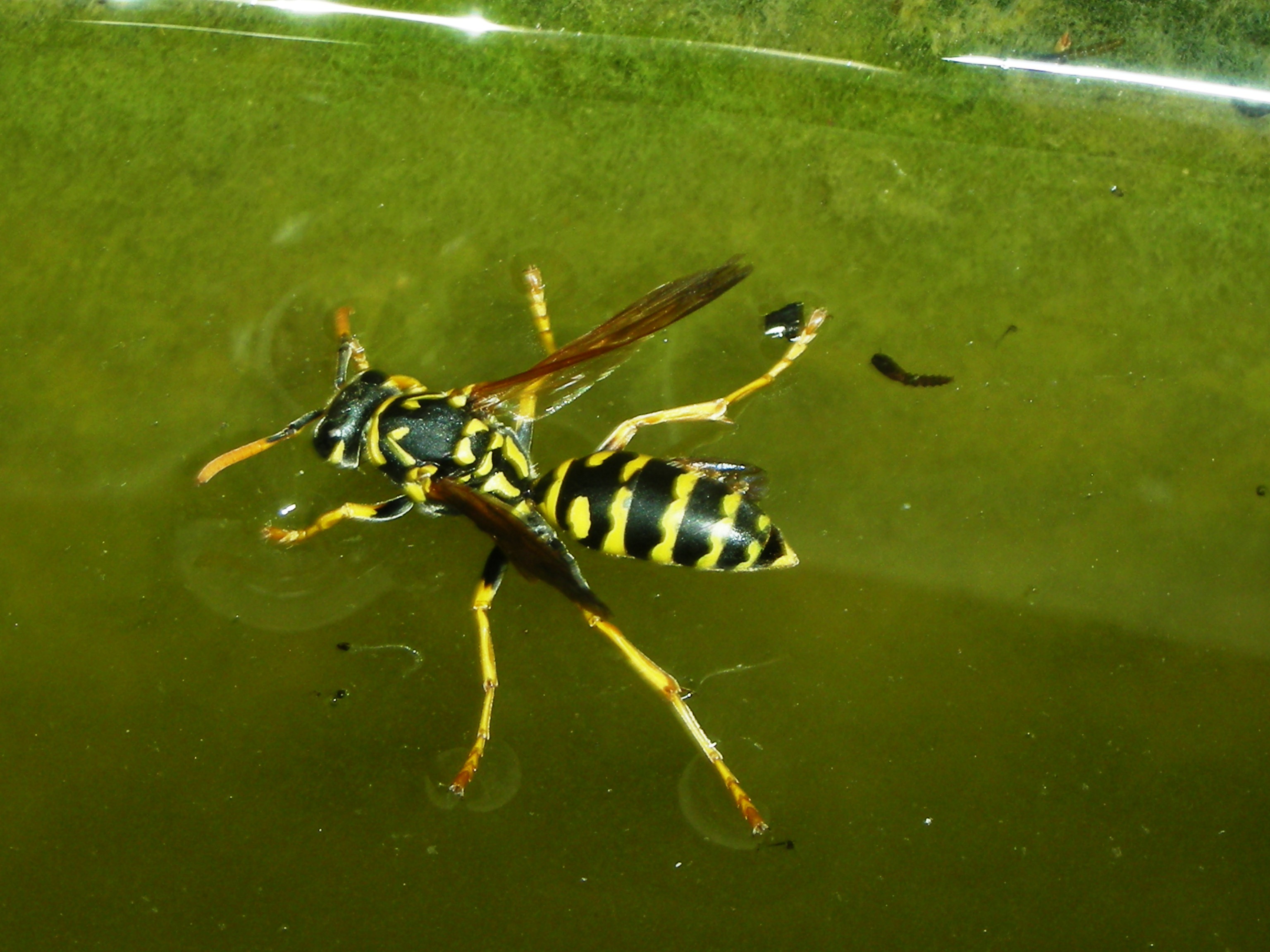 The conspicuous laminae descending from the envelope of this Polybia scutellaris nest may serve as drip tips that conduct rain water rapidly off the surface.  Costa Rica. 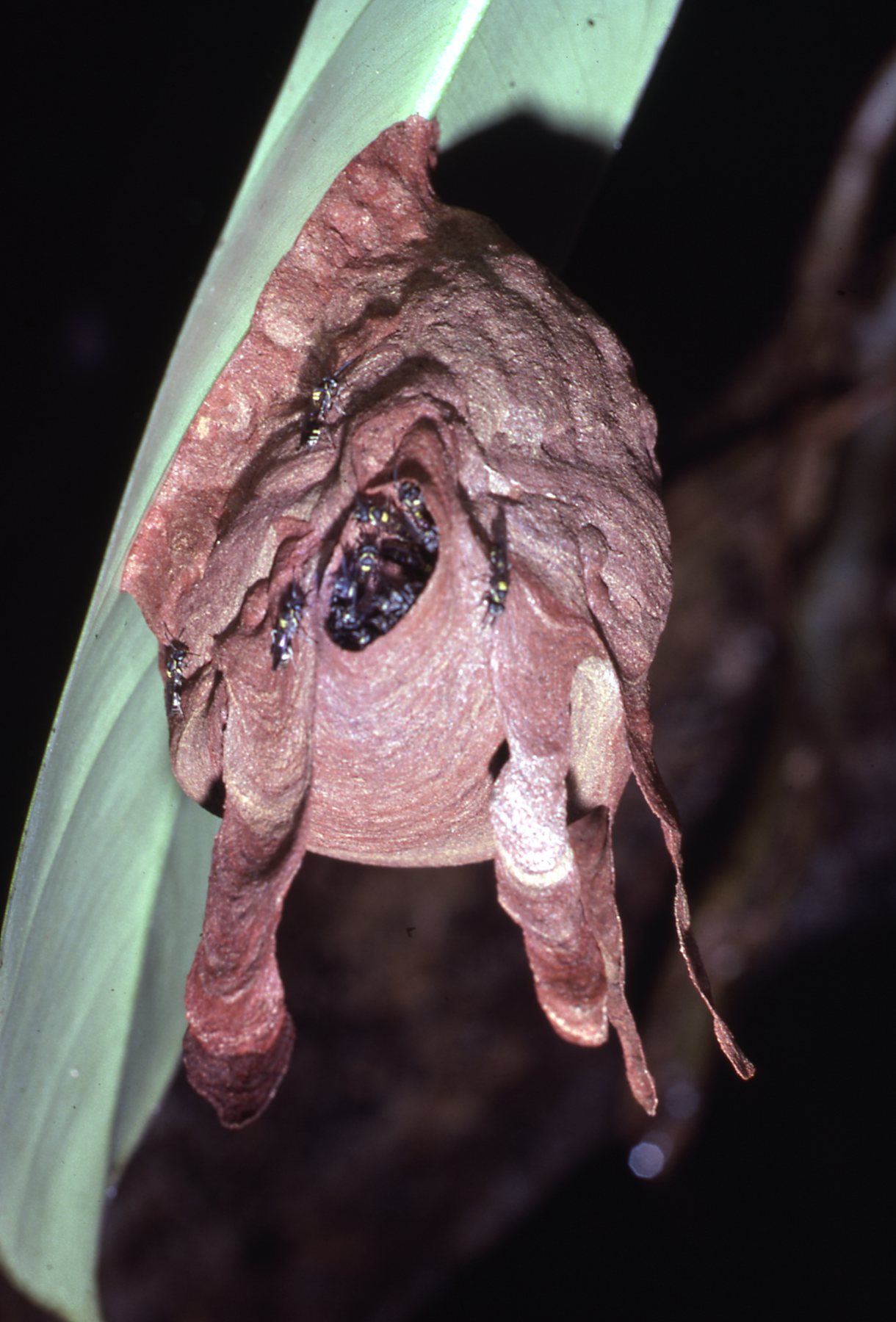 Where palms with spiny trunks are abundant, Mischocyttarus labiatus preferentially bases its nests at the tips of such spines.  This presumably serves a defensive function against ants, which would have to walk up a great many spines in searching for any given wasp colony.  Note also the nest’s extremely long, narrow petiole.  Costa Rica. 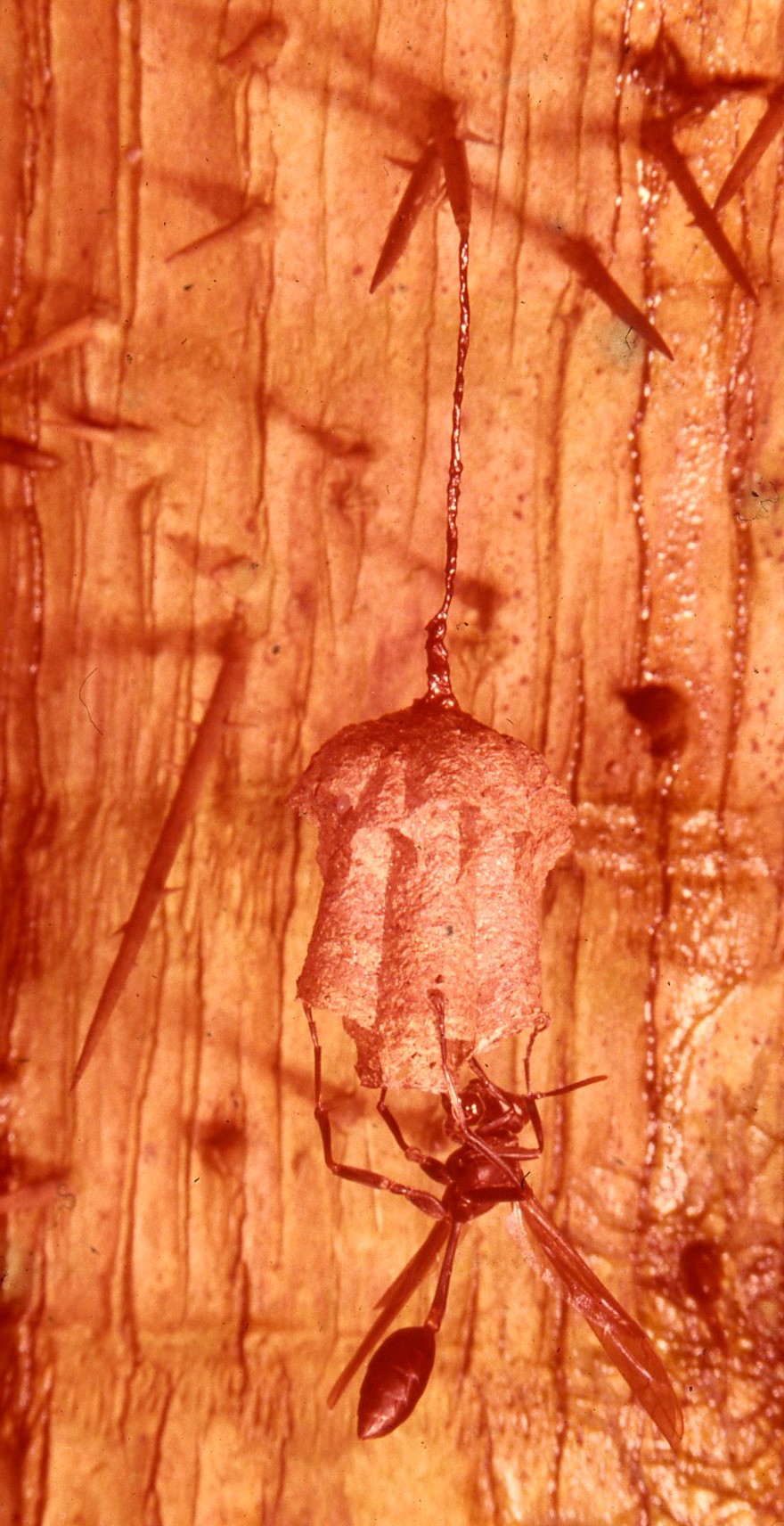